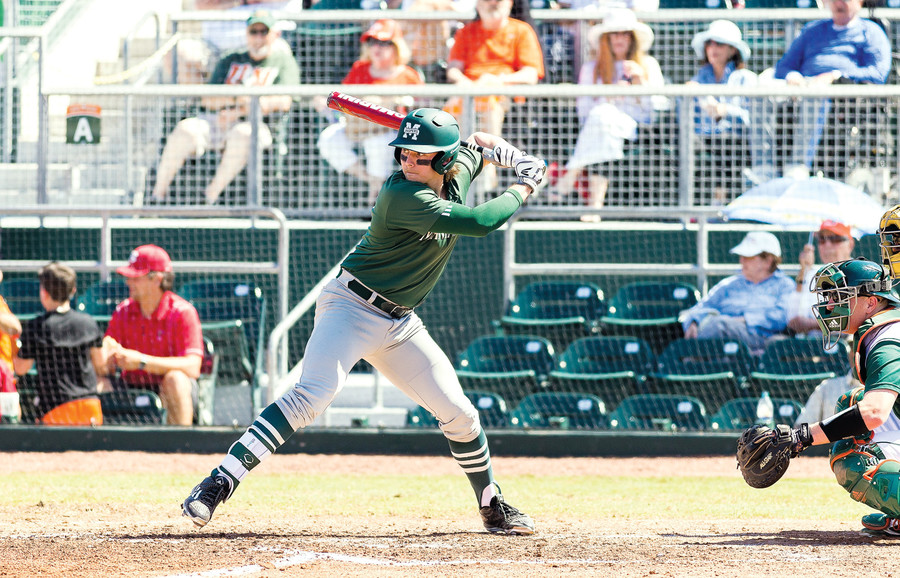 Manhattan College’s Christian Santisteban in a 4-7 loss to the University of Miami on March 6, 2016.
Photo by Mario Houben
By Sean Brennan

When Christian Santisteban woke up one morning recently, it took him a minute or so to remember where he was. Not surprising, since May and June had been a whirlwind of activity as well as an emotional roller-coaster for the recently graduated Manhattan College baseball star. So it was ironic that Santisteban, the reigning Metro Atlantic Athletic Conference (MAAC) Player of the Year this past season, woke up in the town of Normal, Illinois, as there has been very little that has been normal in his life of late.

After graduating from Manhattan in May with a degree in civil and environmental engineering, Santisteban, one of the greatest players in Jasper’s history, was expected to hear his name called during Major League Baseball’s three-day amateur draft in early June, and from there to begin his life of playing professional baseball, his boyhood dream.

The three-day draft came and went without Santisteban getting selected, but, as he told The Press several weeks ago, he would still try and find a way to keep his dream alive. And in late June he did just that, when he signed a professional contract with the Traverse City Beach Bums of the independent Frontier League.

Yes, it lacks the glitz of being picked in the draft, and the money, well, he could probably earn more bagging groceries at Stop and Shop. But Santisteban is in uniform again, he has a team to call home, and he is thrilled to be given an opportunity to continue chasing his dream.

“I signed about two weeks ago,” Santisteban said. “I didn’t get any offers in free agency, but I did talk to a scout from the (Miami) Marlins and he said they just didn’t have room for me right now, so I should go play in an Independent League and when a spot opened up, I’d hear back from them. So I signed with Traverse City and I’m loving the experience.”

The Frontier League is an association of 12 independent teams – meaning they are not affiliated with any organization in Major League Baseball. The league, based mostly in the Midwest, includes teams such as the Gateway Grizzlies (located in Sauget, Illinois, just outside St. Louis), the Normal CornBelters (located just outside Bloomington, Illinois), the Joliet Slammers (which is also located in Illinois and gets its team nickname because of its proximity to both Joliet and Stateville correctional facilities), the Washington Wild Things (although this Washington is actually in Pennsylvania, just outside Pittsburgh) and, of course, the Michigan-based Traverse City Beach Bums, to name but a few.

It is about as far from the big time as one can get, but you won’t hear a single complaint from Santisteban.

“I just wanted an opportunity to show people what I can do as a ballplayer, and this is my opportunity,” said Santisteban, a Miami native who finds it rather humorous he wound up playing for a team named the Beach Bums. “Lots of guys have gone from playing in the Independent League to getting signed by a Major League team, so that’s my plan now.”

Santisteban, who is batting .284 with five doubles and six RBI in his first 13 games for the Beach Bums so far, remembers battling a wicked case of nerves in his professional debut against the Wild Things in late June.

“In my first at-bat, their pitcher threw me a nasty (curveball) for strike one, and then I fouled off the next pitch and all of a sudden I’m in an 0-2 hole and I’m thinking, ‘Man, I don’t want to strike out in my first pro at-bat,’” Santisteban said. “I wound up fouling off another pitch and then he threw a ball inside. On the next pitch I hit a hard ground ball to the infield and the fielder ended up throwing the ball away, so I reached base on an error in my first at-bat. Later on in the game I got my first hit when I doubled off the wall. It was a very exciting night for me. I’ll never forget it.”

Unlike college ball, where when teams play four or five games a week, the Beach Bums are playing games night after night with lengthy bus rides mixed in. Some rides are over five hours long but again, Santisteban is not about to complain. Quite the contrary. He has used the long hours on the road to bond with his new teammates, while also sharpening his card playing skills.

“I’ve actually gotten close with my teammates. I’ve gotten to know the guys pretty well and the bus trips are fun,” Santisteban said. “We have a nice bus, we have Wi-Fi and cable, and we have tables in the back so we can play cards. Sometimes we play cards for five straight hours, so you really bond. The bus trips now are a lot more fun than those at Manhattan, where everyone pretty much just sat there and listened to their own music. But we have some fun times on our bus trips.”

While life in the Frontier League might be short on glamour, it’s even shorter on cash. When asked how the pay was for a rookie Beach Bum these days, Santisteban hesitated at first before divulging his monthly take.

“The pay is definitely not great. It’s enough to get by. I’ll tell you right now. I’m only a rookie so I only get $200 a month,” said Santisteban, who may someday be making that by the hour as an engineer. “It’s really not that much. But when you go on road trips they give you money, $20 a day. We just had a seven-game road trip, and they gave us $140 straight up so you just have to make it work. But we really don’t have to pay for much. The only thing I might have to pay for would be lunch, because there is a team meal after the game, and when we’re home, our host family is constantly cooking for us. So the only thing you’re really paying for is something that you really, really want. But it’s really not a lot.”

One major upgrade the Frontier League has over college baseball is that for the first time Santisteban doesn’t have any roommates. He and two other players are guests of a host family in Traverse City, and it’s almost as nice as living at home.

“The team hooked me up with the host family, Tom and Cindy Ole. Me and two other kids from the team live with the same host family,” Santisteban said. “It’s pretty nice. I have my own room and they are really nice people. They cook for us and do stuff for us. I really like them. They take in players every year.”

While Santisteban’s real family has yet to see one of his games – “They’re thinking of coming to see me play real soon to share the experience,” he said – there has been no shortage of contact with his old Manhattan teammates, who are sending an endless string of text messages.

“All my teammates are texting me constantly to see how it’s going,” Santisteban said. “I talk to them all the time and we stay in touch. They’re all happy for me.”

The sting of not being drafted has abated somewhat for Santisteban over the last three weeks as he throws himself into his new career. He hopes the Marlins will be in touch sooner rather than later, as he continues to put up solid numbers for the Beach Bums.

But until that phone call comes, Santisteban will continue to relish his new opportunity, his “Bull Durham” life if you will. Every meal with his host family, a banquet. Every bus trip, a bonding opportunity. Every day, a chance to put on a professional uniform. Every at-bat, an opportunity to prove to those who didn’t draft him that they missed the boat by not signing him.

“I definitely think I’m paying my dues right now,” Santisteban said. “I mean I would have loved to have been drafted and get all that stuff going, but I just want to prove myself and show them that I’m capable of playing at this level. And whatever team signs me, I will prove myself to them, and the teams that didn’t take me, it will be their loss. But right now I’m still getting used to this whole lifestyle, and I love the way it is so far. I’ll tell you right now, someone doing what I’m doing is not doing it for the money. It’s because you love the game and the lifestyle.”