Independence Avenue neighbors say they want their speed bumps back 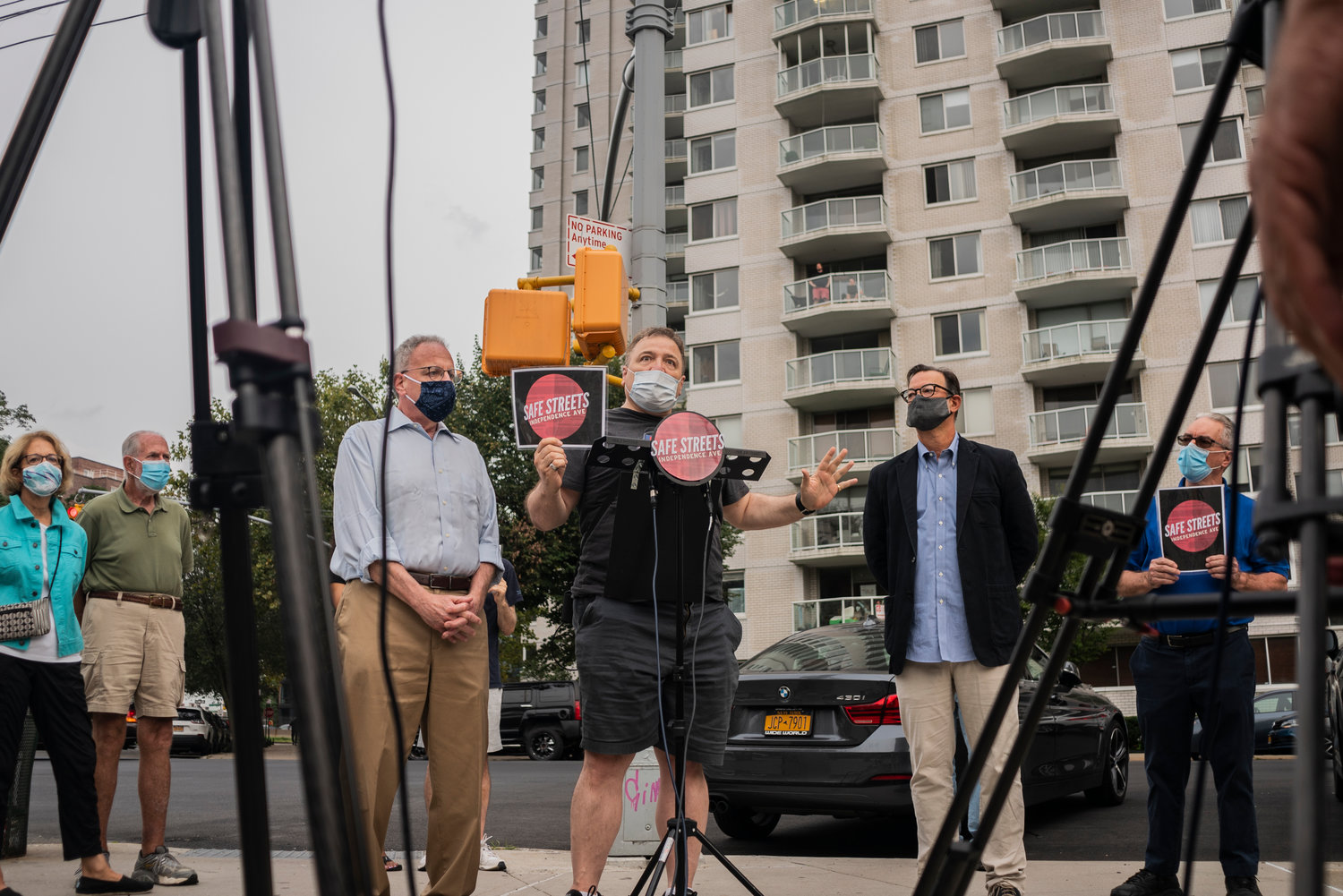 Assemblyman Jeff Dinowitz and Councilman Andrew Cohen were among those taking part in a safe streets’ rally last week, where concerned neighbors expressed individual grievances bout nightly drag racers along Independence Avenue. While drag racing has been an issue in the community for several years, it’s resurged over the past few months.
HIRAM ALEJANDRO DURÁN 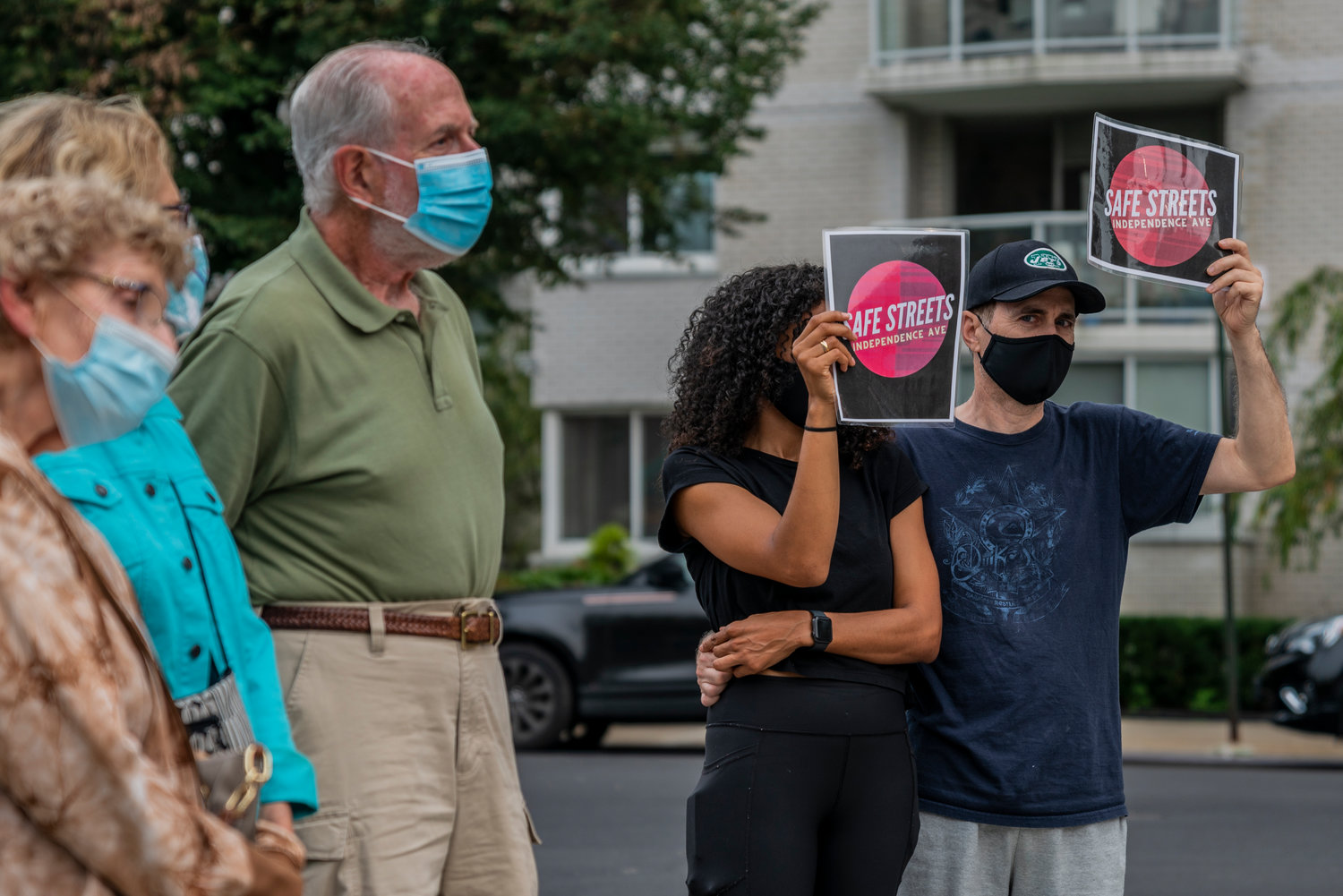 Neighbors held laminated ‘Safe Streets’ signs during a rally across from the Spuyten Duyvil Library to bring attention to the dangers of drag racing and other reckless driving that has been taking place along Independence Avenue. The street is also home to schools, temples and parks, where pedestrians could get hit by a speeding car.
HIRAM ALEJANDRO DURÁN 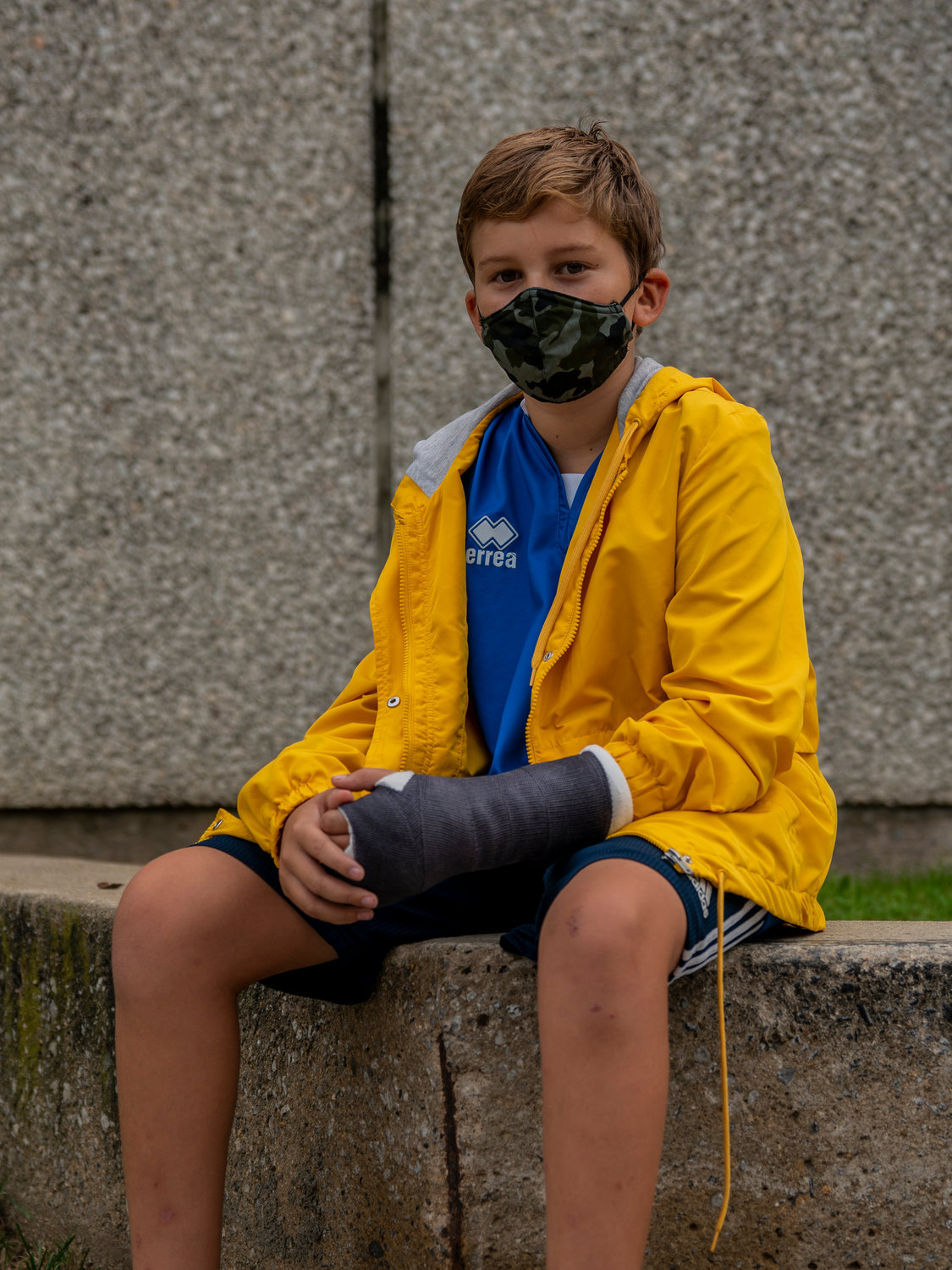 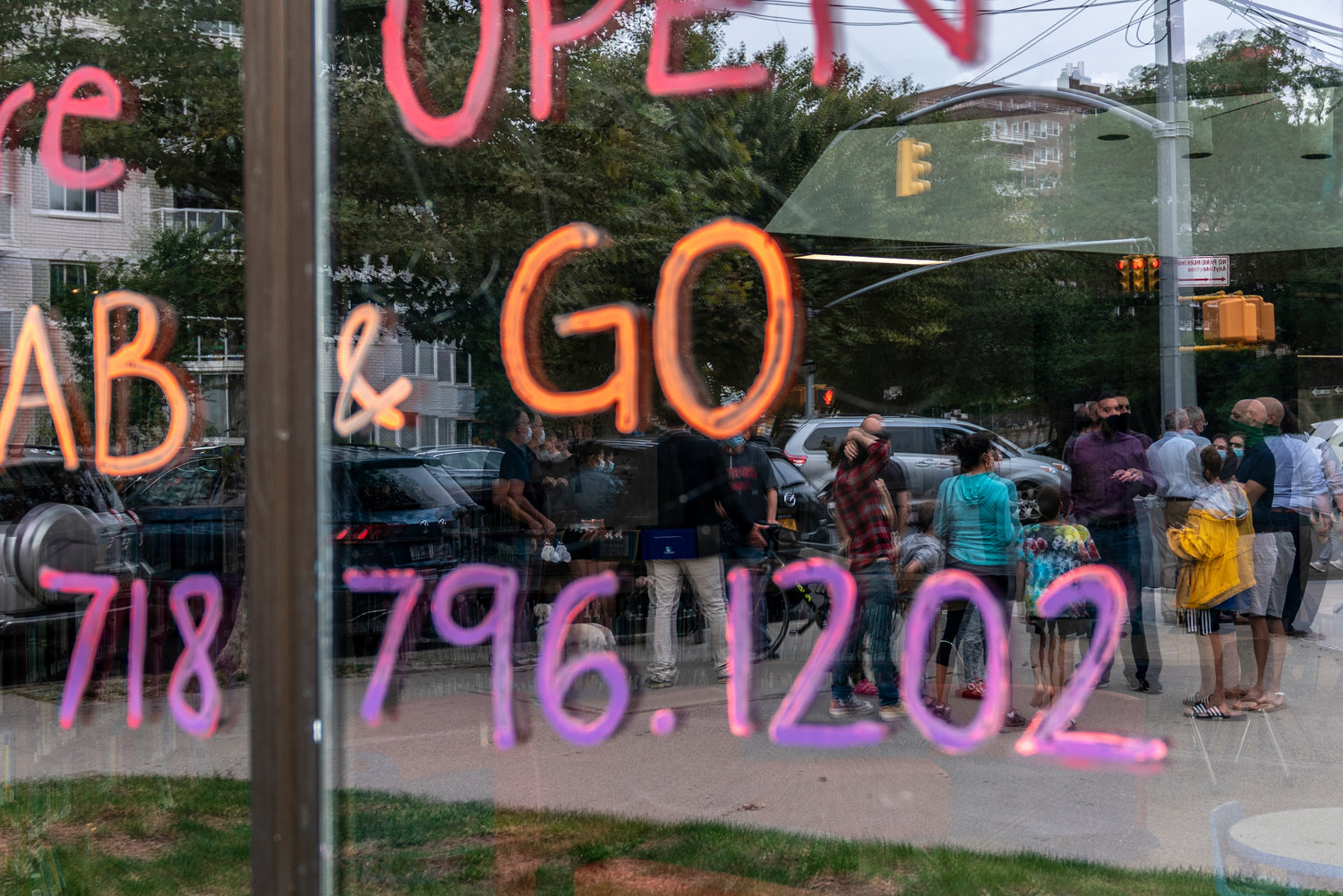 Last week’s safe streets rally near Independence Avenue addressed the resurgence of drag racing in the community — which has been an off and on problem over the years. The topic was also addressed a short time later during an already-scheduled Community Board 8’s traffic and transportation committee meeting.
HIRAM ALEJANDRO DURÁN 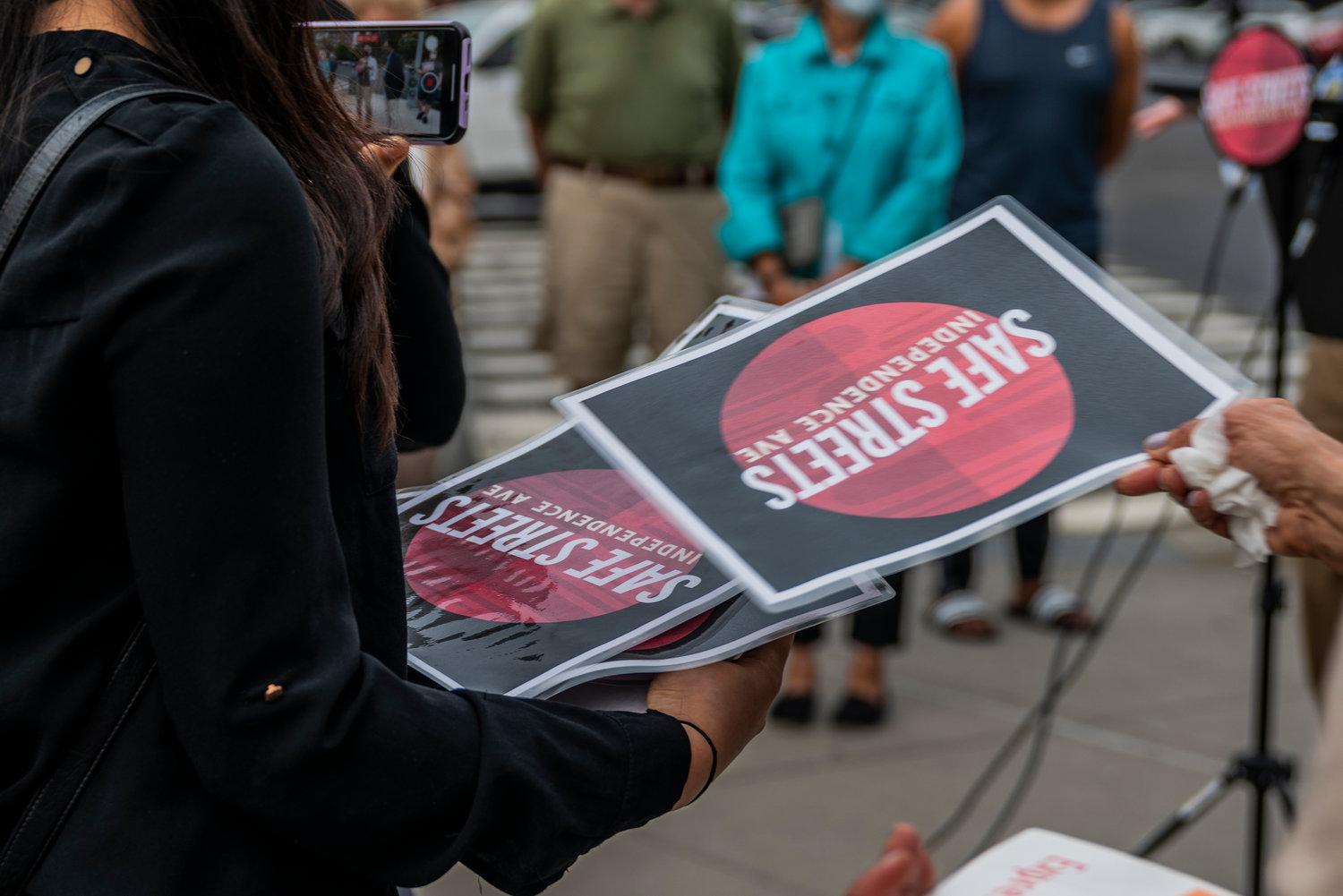 As the safe streets rally on Independence Avenue waned last week, neighbors returned the laminated signs provided to them for the photo op. Drag racing has been a persistent issue in the community over the past few years, though it’s recently experienced a powerful resurgence.
HIRAM ALEJANDRO DURÁN
Previous Next
By ROSE BRENNAN

The stretch of Independence Avenue is largely green, scenic and residential. But it’s been facing a problem over the past few years that threatens the peace there: It’s become a hotspot for drag racing.

Although other nearby roadways — including Fieldston Road, the Henry Hudson Parkway, and the Major Deegan Expressway — are some of the more common stretches used for the illegal speeding, the most prominent issues seem to center around Independence Avenue between West 232nd and West 246th streets. Largely straight, currently devoid of speed bumps and traffic cameras, and wider than most of the other streets in the community, Independence has become a drag racer’s paradise — much to the chagrin of those who live on and around it.

Independence’s appeal to drag racers is nothing new, but it was something Assemblyman Jeff Dinowitz hoped to curb by advocating for the installation of speed bumps on the street. After that was done in 2013, the drag racing seemed to die down, at least on Independence.

But over the summer, the city’s transportation department repaved Independence, removing the speed bumps. While city officials say those bumps will indeed return, that has yet to happen.

“They created a racetrack,” Dinowitz told The Riverdale Press last week. “It’s not only as smooth as can be now, there are no speed bumps, there’s no crosswalks, there’s no double yellow lines. There’s nothing.”

Samantha Charlip, who lives along Independence, says drag racing certainly isn’t new to the community, but it’s definitely gotten worse over the past few months.

“They were decently bad last summer, even though there (were) speed bumps, enough to where people were complaining and I noticed it,” Charlip said. “Nobody was happy about it. But it’s gotten much worse with the absence of the speed bumps.”

Jeffrey Schifman, who lives right off of Independence Avenue, says he’s seen a change in the area’s drag racing patterns. In his experience, most of it used to occur at night, which was disruptive because of the noise. But it’s only recently that daylight drag racing has proliferated.

“You would see one or two during the day doing donuts or something like that,” Schifman said. “It’s constantly now. You probably can’t go one night without hearing this.”

The presence — and noise — of the continued drag racing might be difficult enough for neighbors to deal with. But for many of them, it’s gone beyond just a nuisance: They feel unsafe.

Many worried about what might happen if drag racing is allowed to continue on Independence. Both P.S. 24 Spuyten Duyvil and Riverdale/Kingsbridge Academy are located along the street. There are also two synagogues, two parks and a library — all areas children might frequent.

“The worst of it tends to be around 3 or 4 o’clock, when it’s sort of peak time for children and families to be out hanging out at the park or playing at the playground,” Charlip said. “It becomes a safety issue.”

The area also is a city-designated “slow zone,” meaning the speed limit through there is actually 20 mph. Tao Moran, a former member of the traffic and transportation committee who also is Schifman’s wife, claimed the drag racers congregate in parks to smoke marijuana before getting in their cars and racing each other. The combination of drugs and a violation of what is supposed to be slower-than-usual traffic means the issue is elevated beyond a speeding ticket — and it should be treated as such.

“We do need police enforcement, because it’s not just a traffic issue, it’s a moving violation,” Moran said. “When you get moving violation points on your tickets, these consequences become much stiffer.”

During the traffic and transportation committee meeting following the rally, chair Dan Padernacht discouraged neighbors from calling 311 with drag racing complaints, instead urging them to report those issues to his CB8 committee. Photographs and videos of what those cars are doing — along with their license plates — is even more help, he added.

Padernacht is pushing DOT to return the missing speed bumps on Independence, and consider to install mobile traffic cameras between West 232nd and West 246th, as well as on Riverdale Avenue between West 230th and West 236th streets.

The committee also will seek help from the 50th Precinct, pushing for increased police presence in problem areas, parking police cars at intersections throughout CB8 to serve as deterrents, and increased patrol in documented problem areas, especially in the early morning and late evening.

But because the problems also extend to the Henry Hudson and the Major Deegan, Padernacht wants state highway patrol to also step in.

“Everything that we’re saying tonight — and these requests — are just the beginning,” Padernacht said. “We’re going to have to keep asking for additional support because this will be a continual problem until people who race in the area get the idea that people are getting stopped, people are getting tickets, and people are getting arrested for reckless driving.”