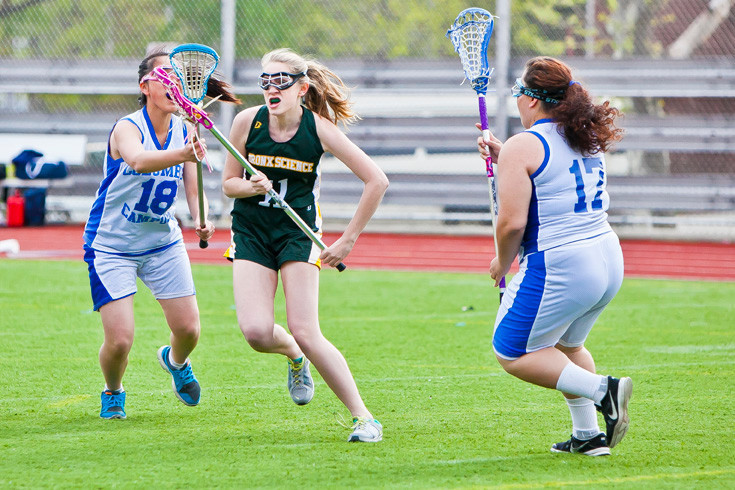 Laire Heuberger, no. 11, of the Bronx High School of Science, charges by Susa lin, no. 18, and Jessica Smith, no.17, of the Christopher Columbus   Manhattan College’s x-country coach resigns South Riverdale Little League round-up Campus to score a goal. Christopher Columbus went on to win at home 8-5.
Marisol Díaz/The Riverdale Press
By Chris Mascaro

When Will Erwin was a freshman at Bronx High School Science, the extent of his lacrosse playing consisted of a handful of guys and girls tossing a ball around with the few sticks they had on a paved courtyard at the school.

But from a club that met once a week blossomed a burgeoning lacrosse program. The Bronx Science boys, in only their second season as a varsity team, have advanced to the PSAL playoffs, while the girls also earned their first postseason berth in their third varsity season.

On Wednesday, Erwin and the third-seeded Wolverines were scheduled to play No. 2 Stuyvesant in a Bowl Division semifinal on Randall’s Island. One day prior, the sixth-seeded girls were scheduled to play at No. 3 New Dorp in a Bowl Division quarterfinal. Only two years ago, the girls lost all six of their games in their first season of formalized competition in the PSAL’s developmental league, a division made for new teams.

“It’s been such a journey for all of us,” said senior captain Alyssa Murphy about the girls finishing the regular season 9-6, only two games behind Columbus for the Bowl West division title.

“It’s really awesome, that’s really the only word for it,” Erwin, a senior captain, said about the boys finishing the regular season 8-3, good for third place in the Bowl division.

Barton Allen, an English teacher at Bronx Science, started the school’s lacrosse program three years ago as a club. Allen, a Long Island native who played the game in high school and for two seasons at SUNY Geneseo, taught the students basic throwing and catching skills, with light drills and some film study to learn the rules of the game.

“Only a few of the kids had experience playing lacrosse, but they had interest and asked me to help out with the club,” Allen said. “The beauty and the benefit of teaching at Bronx Science is that the kids are really motivated both in and out of the classroom, and they got better.”

The programs applied for varsity status with the PSAL the next year — a process that entails having a coach, having the ability to provide equipment and having a student body large enough to produce a team, among other things. The Bronx Science girls were awarded varsity status for the 2012 season with Allen as their coach, and though they took their lumps, the girls were hooked on the game.

“Coach Allen was my homeroom teacher and he mentioned the team to me because I had played soccer before, so I figured I’d give it a shot,” said Murphy, who has six goals this season. “I absolutely fell in love with the game, and we all got to learn it together, as a team.”

Allen moved to the boys team when they were given varsity status the next year. Ben Cornish, an engineering teacher at Bronx Science, is a native of Australia and did not have prior lacrosse experience, but Allen knew of his interest in sports, and Cornish was game for the challenge of coaching the girls team.

“He came in not knowing anything about lacrosse, but he was one of the teachers willing to step up and has done a really great job,” Allen said. “It was a big concern [not knowing who the girls’ coach would be].”

Like Cornish, the girls’ willingness to be flexible has led to their success. Senior captain Katrina Hua, who’s been with the team since its inception, tore her ACL last season and was having trouble running at the beginning of this year. So she agreed to play goalie, where she has made 100 saves in 15 games and has been the “MVP for us” and “one of the best goalies in the PSAL,” according to Cornish.

“It was a bit of an adjustment,” Hua said. “The first game, I was extremely nervous. There was maybe a little bit of panic, but a pass never comes at you like the intensity a shot comes in. Passes aren’t meant to get passed you, so if a shot does, you’ve got to get over it.”

Senior captain Annie Zou leads the team with 23 goals, junior Caroline Kravitz has 20 and the girls’ success has created a buzz around campus. They made a promotional video for Wolverine TV, a broadcast played in all the school’s homerooms once a week, created a Facebook page and put posters around the school in an effort to drum up support and lure potential recruits. It has worked.

“Once you put that brand playoffs on it, it makes it such a great accomplishment,” Murphy said. “More kids are wearing lacrosse jerseys around the school and we’re really getting the spirit up.”

The boys have also done a fair share of recruiting. Senior attack Christian Monteavaro had some experience playing lacrosse in middle school but he’d been a standout running back on the football team until he was lured back to lacrosse his sophomore year. He said the moves for an attackman are akin to a running back’s en route to the end zone.

“With dodges and spin dodges, you’re just moving to the net instead of the end zone, they’re very similar,” said Monteavaro, who’s scored 21 goals this season and will play at Wells College next year. He added, “It’s nice to know that we’re doing so well this year. Especially in our school, and especially in a sport that’s kind of obscure. Kids don’t really pay too much attention unless you win a championship. Notoriety will come when we do well.”

Erwin knows that feeling. A midfielder with 36 goals and six assists this season while serving as the team’s primary faceoff man, Erwin will play at Colby College next season. Making the playoffs this season made him think back to the club players who graduated without getting a chance to play on the varsity level.

“The developmental team was a struggle,” he said. “We know the difference of being a team for four months and 14 months. So we’re really happy to be here and we’re happy for the girls team, too.”

The Wolverine boys can now lean on young players like sophomore defenseman Doug Chadwick, who learned to play in middle school, and sophomore goalie Brian Hwang, who played middle school ball in Georgia before moving back to New York for high school. The players and coaches credit Hwang with turning the team’s fortunes around, but the humble 10th grader said he only started playing goalie because he “sucked at everything else.”

Success didn’t come easily for the Bronx Science lacrosse programs, which makes both teams’ run to the playoffs that much sweeter.

“I am absolutely ecstatic to be in the playoffs,” Murphy said, “I just got chills.”