Cancer overcome, next hurdle is triathlon 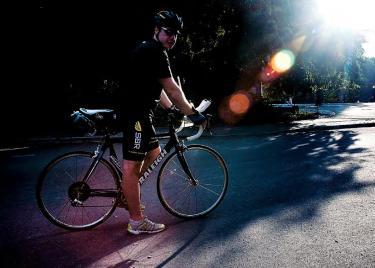 Each one is a daunting task in and of itself, but when all three are combined, it becomes one of the most physically punishing athletic competitions in the world — the triathlon.

For most people, participating in the New York City Triathlon would be a challenge beyond anything they had previously experienced. For Harrie Bakst, a 25-year-old Riverdale native, it can’t come close.

Bakst will compete in his first New York triathlon this weekend, but when he dives into the Hudson River early Sunday morning for the start of the race, the grueling adventure will feel tame compared to what he went through just three years ago.

Born and raised in the local area, Bakst attended PS 24, the David A. Stein Riverdale/Kingsbridge Academy, MS/HS 141 and Riverdale Country School. He played stickball with his friends as a kid, was a member of the South Riverdale Little League and eventually went on to lead the Riverdale Falcons to an Ivy League baseball title as one of the varsity squad’s top pitchers.

By all accounts, the younger Bakst was an active, athletic and healthy person. Unfortunately, things changed.

In the final months of his senior year of college at New York University, Bakst was preparing for a visit to South Africa to defend his thesis — how the impending arrival of soccer’s World Cup would help peace and social progress efforts in the region.

It was a trip that he would never make.

During a routine medical appointment to receive the immunizations necessary for his visit, the doctor discovered a lump in Bakst’s jaw and feared that it was a tumor in his salivary gland. Although Bakst had no symptoms, further tests confirmed that Bakst had a rare form of cancer — adenoid cystic carcinoma — that afflicts fewer than 1,000 Americans each year.

“When you are 22 years old, you never expect something like this to happen. It was like everything was put on pause and my whole life was suddenly flipped upside down,” Bakst said. “Instead of thinking about law school, I was now worried about living to be 25. I never really asked ‘Why me?’ I just put my head down, decided I was going to deal with it and get it cured.”

In March 2007 — one month after the tumor was detected — Bakst went under the knife to have his salivary glands and 13 surrounding lymph nodes removed. The good news was that the cancer had been contained and did not spread, but Bakst soon needed to begin a two-month stretch that would require 33 separate radiation treatments.

According to Bakst, the radiation caused many severe side effects, including the loss of his taste buds and hair, extreme fatigue and persistent pain when swallowing. Finally, in early June of that year, Bakst was cancerfree and fully determined to make the best of what he saw as a second chance at life.

“Five months after my final treatment, I decided to run in the New York City Marathon, basically just because I wanted to prove to myself that I was alive, healthy and back to normal,” said Bakst. “Physically, I was probably not ready or strong enough, but cramps and soreness were nothing compared to those treatments, so I mentally toughed it out and got to the finish line.”

It was the first of three straight New York City Marathons that Bakst would enter and complete. In that time, Bakst used the races to raise more than $25,000 for Memorial Sloan-Kettering, which is the hospital that he credits with saving his life.

Last fall, right before running in the 2009 marathon, Bakst came up with the idea of entering the 2010 New York City Triathlon. He actively began training for this weekend’s event in January.

“I felt like I had already conquered [the marathon], and now this was the perfect next test for me,” said Bakst. “In a marathon you are pounding on the same muscles for 26 miles, but each of the events in the triathlon work out a different part of your body. Honestly, from preparing for this event, right now I am absolutely in the best shape of my life.”

His training regimen consists of running five- to 10-miles up to four days a week, biking anywhere from 12 to 24 miles through Central Park every Thursday, and a one mile swim at the Jewish Community Center in Manhattan on Friday mornings, Bakst said.

Running is Bakst’s strongest of the triathlon events, and he considers himself to be a good swimmer, so with this being his first true experience in competitive cycling, he expects the bike ride to be the toughest part.

While admitting it will be “brutally hard,” and adding that he does not care how many hours it takes, Bakst is confident that he will cross the finish line, barring any unforeseen circumstances. In fact, the former Riverdalian’s biggest concern might come as a bit of a surprise.

“When I was in third grade at PS 24, we took one of those Clearwater trips out on the Hudson, and when we pulled a net out of the river, there was a boot, a beer can and an eel in it,” Bakst said with a laugh. “I am terrified of having to swim in the Hudson, so once I am out of the river, I will be set. The rest will be a piece of cake.”

Bakst will be racing alongside his older brother Rich, who he says is an even better athlete than himself and was a major inspiration to him during his battle with cancer. He will also have plenty of support from the sidelines, with his parents — who still reside in the same Riverdale apartment he grew up in — as well as other relatives and friends lining the course, which goes as far north as the Mosholu Parkway in the Bronx and eventually ends in Central Park.

As if all of this wasn’t enough for a young man who hasn’t even celebrated his 26th birthday, Bakst is also currently the president and founder of his own thriving business.

Shortly after his successful cancer battle, and with only $2,000 dollars in his pocket, Bakst created Carnegie Sports & Entertainment, a company that specializes in integrating sports and entertainment marketing with charitable endeavors. Three years later and Bakst has his own midtown apartment and office, and works with clients such as Coca-Cola, as well as professional athletes and celebrities like Tiki Barber, Paul Pierce and Jerry Seinfeld.

“After going through cancer, I would be happy scrubbing toilets, so this is just like icing on the cake,” said Bakst. “I always think it is important for me to take a step back, though, to remain humble and grateful. I would never want anybody to need cancer in order to have an epiphany, but for me, I really think it was all meant to be, and I really would not change a thing.”