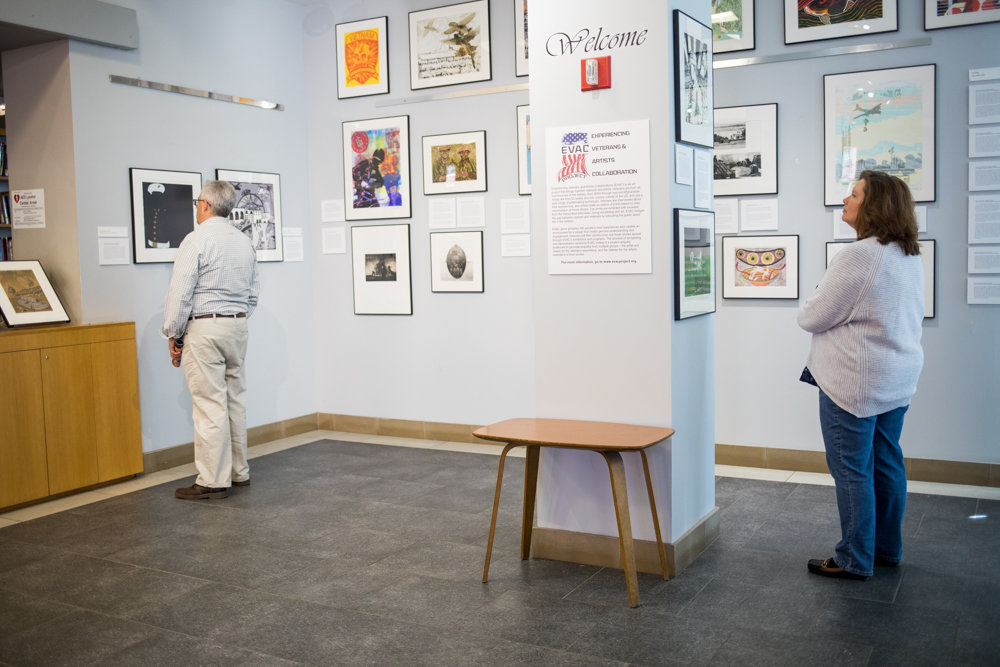 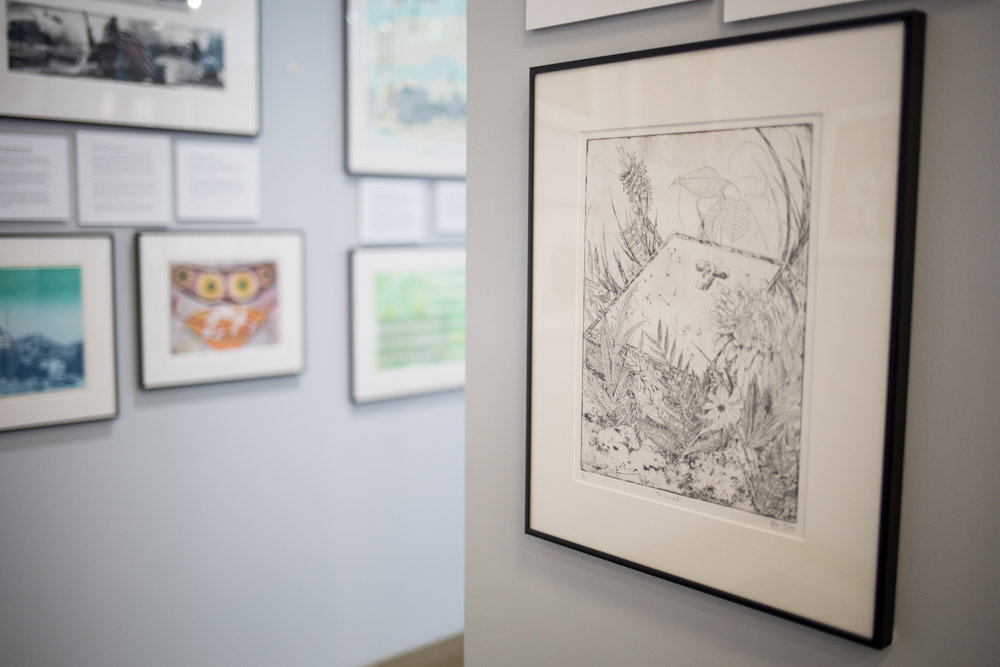 Kirsten Flaherty's 'For Leonard' is among the artworks on display in 'Experiencing Veterans and Artists Collaboration' at Manhattan College. The exhibition allows artists and veterans to create works of art, wherein artists, like Flaherty, listen to veterans' stories and create something based on those stories.
JULIUS CONSTANTINE MOTAL 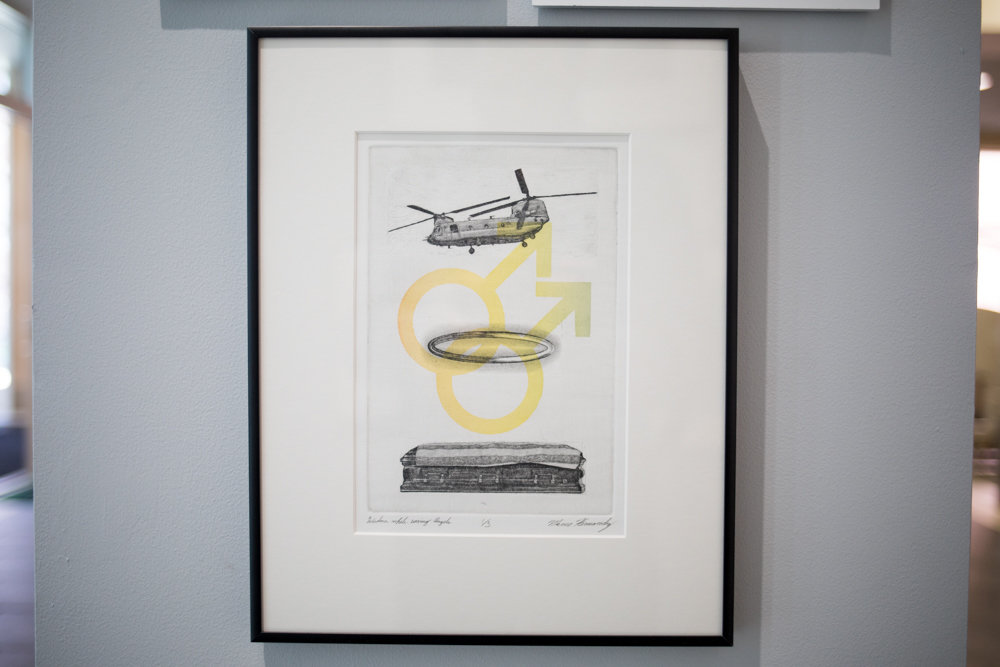 Marco Hernandez created 'Wisdom While Saving Angels' based on the story of Nick, a U.S. Navy veteran, who enlisted as a way to get out of his hard life in his hometown, where he found it difficult to be a young gay man. 'Wisdom While Saving Angels' is a part of the exhibition 'Experiencing Veterans and Artists Collaboration,' on display through June 21.
JULIUS CONSTANTINE MOTAL 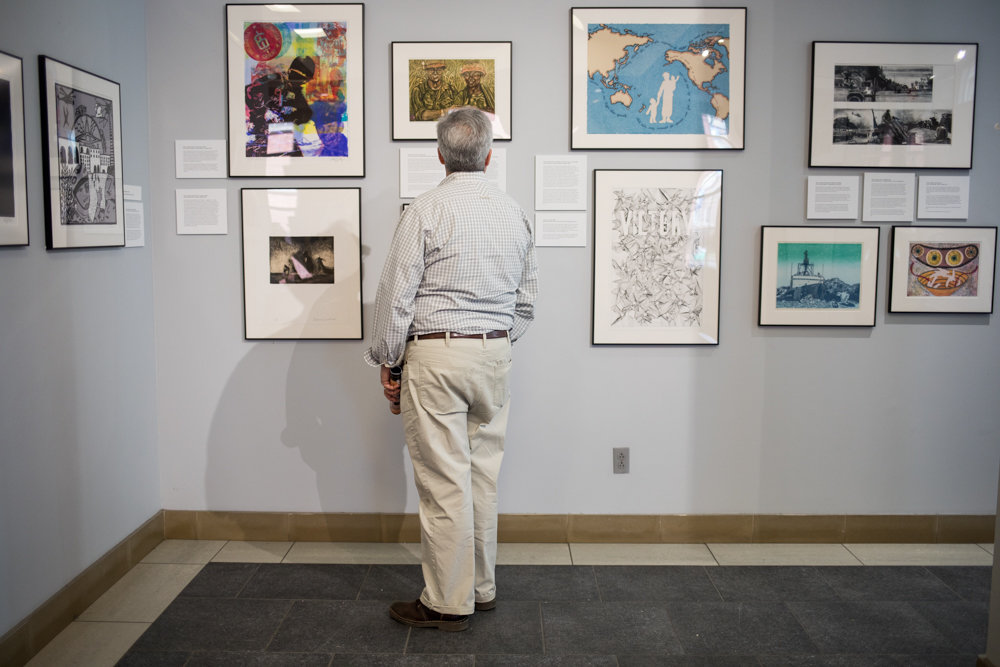 A visitor looks at artwork in 'Experiencing Veterans and Artists Collaboration,' an exhibition on display at Manhattan College's O'Malley Library through June 21.
JULIUS CONSTANTINE MOTAL 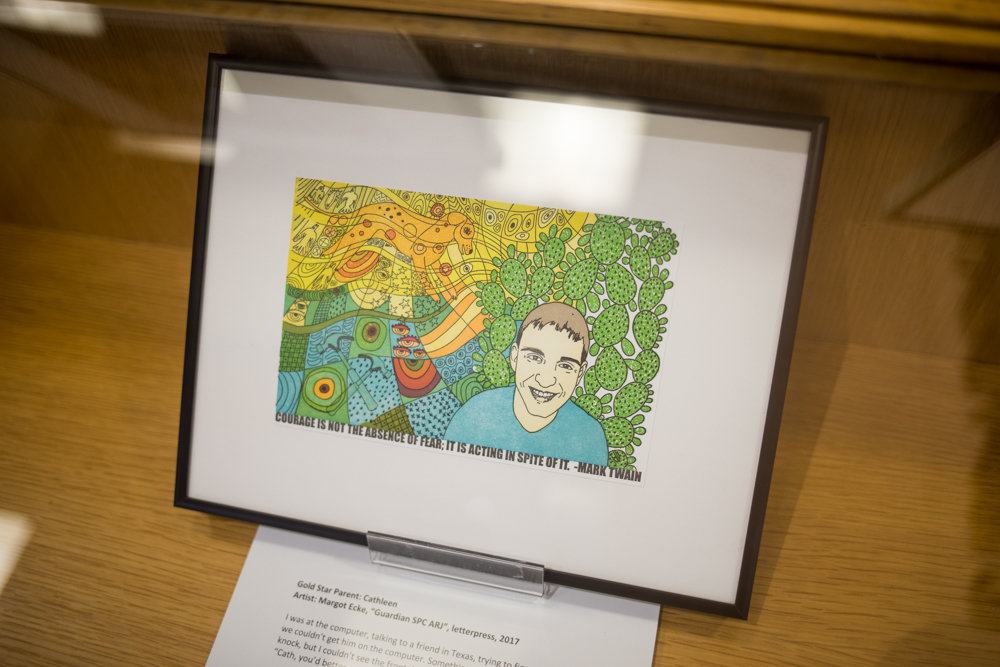 Margot Ecke's 'Guardian SPC ARJ' is based on the story of Cathleen, a gold star parent whose son died while serving in the armed forces. It is a part of the exhibition 'Experiencing Veterans and Artists Collaboration,' which is on display at Manhattan College through June 21.
JULIUS CONSTANTINE MOTAL 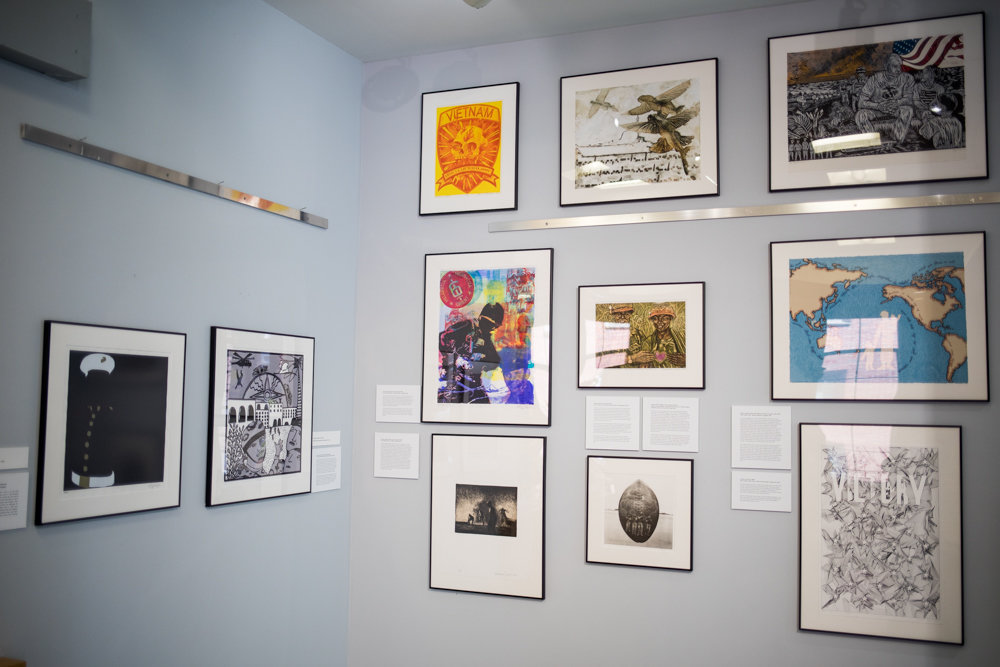 'Experiencing Veterans and Artists Collaboration,' a new exhibition on display at Manhattan College, offered veterans a chance to have their stories interpreted artistically. They met with artists, who in turn created pieces based on those stories.
JULIUS CONSTANTINE MOTAL 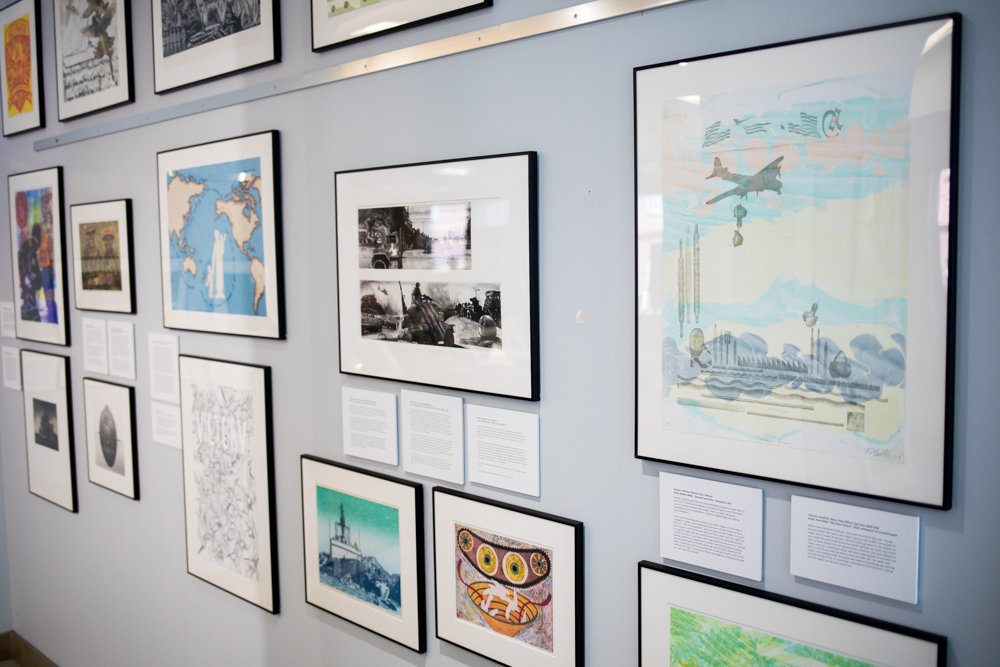 The artworks on display in 'Experiencing Veterans and Artists Collaboration' cover a range of stories and experiences. Artists created pieces inspired by the stories of veterans. It is on display through June 21.
JULIUS CONSTANTINE MOTAL
Previous Next
If you go ...

WHAT: Experiencing Veterans and Artists Collaboration

When Michael Giraldo saw his military experience transformed into a piece of art, he was immediately taken aback.

In a piece by artist Coco Berkman, Giraldo is seen interacting with a mother and two children in Iraq, a representation of his time in the U.S. Army. He completed two tours of Iraq and worked as an intelligence analyst throughout his eight years of serving the United States before attending and later graduating from Manhattan College.

Berkman’s depiction of Giraldo made the veteran feel seen as someone who was compassionate and as a person who relates to others.

The piece also shows Giraldo’s dog on his shoulder as a nod to his life after his military service, something the former soldier thought was a nice touch.

“It hit me deep and I’m glad it showed my puppy,” he said. “I love my golden doodle, and for them to capture that, that was pretty cool.”

Berkman’s piece is part of “Experiencing Veterans and Artists Collaboration,” an art project that aims to bridge the knowledge gap between what it’s like to have a military life and living a traditional civilian life.

In order to achieve that, veterans from multiple generations are interviewed about their experiences in the military, and an audio file from that interview is given to an artist to render a piece they feel is representative of each veteran’s story.

The project is a traveling exhibition that began at Tiffin University in Ohio, and is now on display at Manhattan College’s O’Malley Library through June 21.

Tiana Sloan, director of Manhattan’s Veterans Success Program — which aims to educate veteran students and help them succeed after graduation — finds the project fascinating, especially because it also brings attention to Gold Star Mothers, women who have lost a daughter or son while serving in the military.

“It’s not just veterans serving,” Sloan said. “It’s their families that sacrifice so much while their loved ones are serving.”

Kirsten Battocchio, another Manhattan College alum, is also featured in the exhibition. Artist Emily Sullivan-Smith created a silhouette of Battocchio, displaying only her Marine Corps uniform.

Battocchio spent six years as a Marine, traveling to places like Japan and Sri Lanka and serving in positions such as an aviation maintenance administrator and a Marine security guard.

Upon first glance, Battocchio thinks a lot of people won’t understand the meaning of Sullivan-Smith’s piece. But to her, it makes sense since she spent her interview talking about what it felt like to be one of the few women serving as a Marine.

“A lot of female service members will be able to relate that they don’t want to be seen as ‘the chick’ or ‘the female,’” she said.

When it comes to preconceived notions of what veterans are like, Battocchio wants people to come to the exhibition with an open mind.

“I think what a lot of people do when they don’t know any service members is that they kind of just paint veterans with a broad brush and they just assume a lot,” she said. “There’s a lot of assumptions when you don’t know a certain demographic, and that always happens with veterans.

“I think looking at the different art pieces — especially since it’s across different generations of veterans — you see how different we all are. And each of our stories are unique, but we’re still very connected with one another. So I think that’s always interesting to see how different our stories can be, and how strong our bond is as a veteran community.”

Sloan has similar sentiments about people’s views on veterans.

“People don’t sign up just for what they perceive the military to do,” she said. “There’s people who enlist because they genuinely want to help people.”

Giraldo experienced a more open dialogue in his day-to-day life when his wife’s parents first saw his portrait. His in-laws don’t really know anyone else who has served in the military, so this gave them a chance to learn more about Giraldo’s time in the Army.

“They let organic conversations happen,” he said. “I think (that) allowed them to ask a couple more questions that I think they probably wanted to ask, but weren’t sure, or anything like that.”

It’s even given Giraldo a chance to be more open about his military experience. “What this project has allowed me to do is make me feel more comfortable talking about this.”

Giraldo hopes people who view the exhibition will want to immerse themselves in learning more about veteran stories across all generations.

“I think if someone can go through the art and … can see the history happening through the eyes of veterans, and seeing how different each one,” he said, “when they walk out, they might want to hear more stories of what people have gone through, through different eras.”

Meanwhile, Sloan wants people to leave the exhibition with the mindset there’s not much of a difference between the veteran’s story they’ve learned about and themselves.

“These are people that are walking among us,” Sloan said. “You may not know that this veteran had this background, but you look at this picture that represents a portion of their life, and it just really speaks to you.”