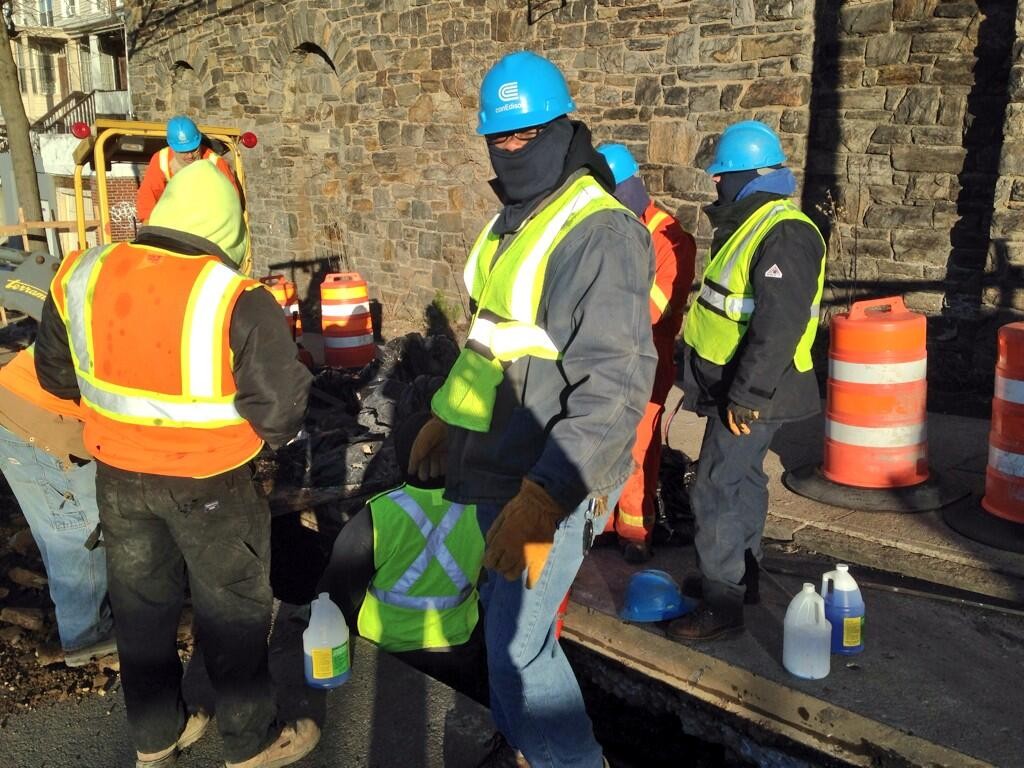 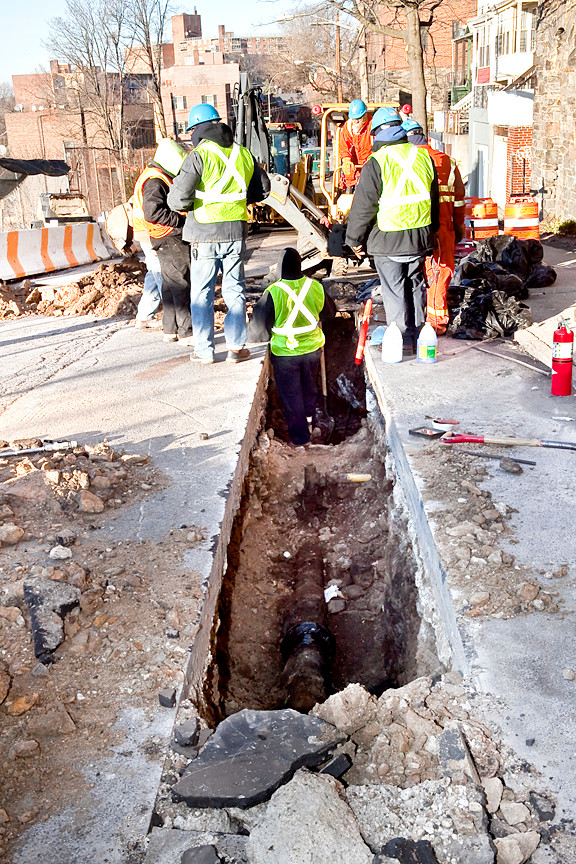 Con Ed representatives could not state the cause of the leak.
Marisol Díaz/The Riverdale Press
Previous Next
By Shant Shahrigian

Workers for Con Edison of New York are repairing a gas leak that apparently started amid underground work on Cannon Place between Giles Place and West 238th Street this morning.

Con Ed spokeswoman Joy Faber said there was a leak on a joint on one of the street's low-pressure mains. She added that since workers arrived on site at 11:16 a.m., they have been trying to find the exact source of the leak on the pipe, which typically supplies gas to homes or commercials structures.

At least six workers were using a heavy-duty hoe to remove steel plates covering holes contractors had created after the start of major repair work on Cannon Place yesterday. Earlier this week, the city's Department of Design and Construction (DDC) said contract crews would "begin test pit operations followed by gas main excavation on Cannon Place and water main bypass/installation" on Wednesday. The work was the first step in an esimated 18-month project to repair a tall wall Cannon Place sits on, an undertaking entailing work on the sewer and other parts of the infrastructure along with parking and driving restrictions.

A man working for Con Ed who declined to give his name said the leak posed no danger to residents. He added an evacuation would be issued only if a gas leak was detected inside a home.

Con Ed spokeswoman Joy Faber said the FDNY has been aware of the situation from around the time Con Ed received a call from an unidentified person at 10:54 a.m. She added that Con Ed dispatched a crew at 10:56 a.m., with workers arriving at the site at 11:16 a.m.

Ms. Faber said the workers would notify the FDNY if they felt an evacuation was necessary.

After Wedneday's deadly gas explosion in East Harlem — and in light of ongoing infrastructure problems on their street — Cannon Place residents were deeply concerned about the gas, which was detectable up and down the road.

"It's alarming," said Cannon Place resident Kristin Hart. "It's such an old infrastructure, something could go bad."

Ms. Hart added that she told her older, 11-year-old child what was going on, but not her 5-year-old.

"Let's hope there's not a disaster like yesterday," she said her son remarked.

An e-mail circulated among her neighbors expressed concern and some distrust of the authorities.

"We ask all of our neighbors to be very aware and diligent in any gas smells and in reporting it, and not to assume that Con Ed is aware because they are not, and we will pay the ultimate price!" a resident wrote his neighbors.

However, Ms. Faber insited workers were trying to fix the situation as soon as possible. She added that residents should call 1-800-75CONED with concerns.

The Press will update this story as staff at the scene learn of developments.