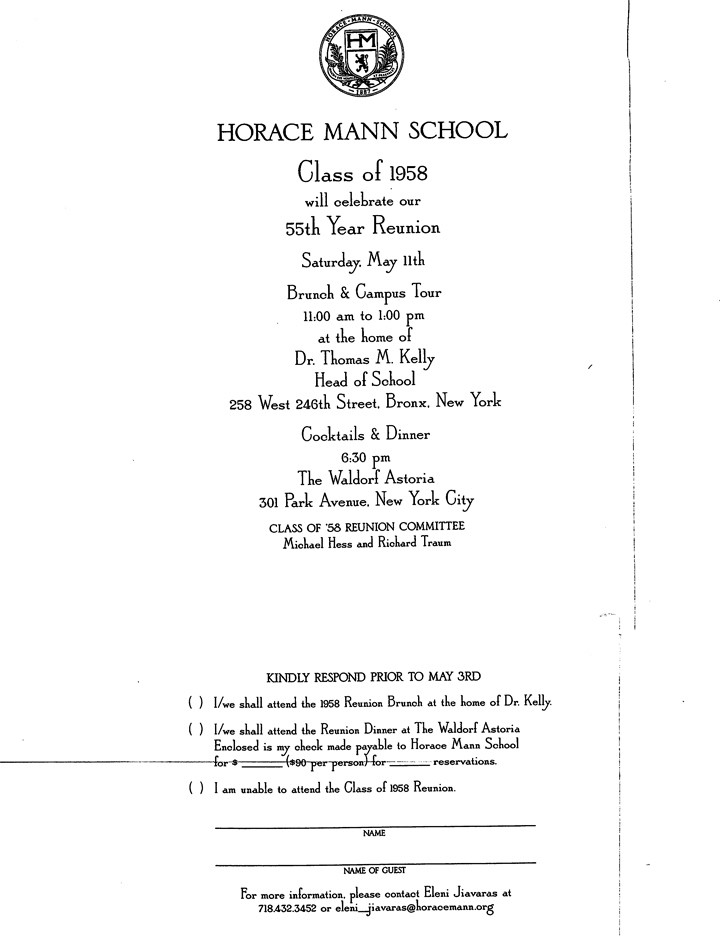 An invitation for a Horace Mann class of 1958 reunion bears the name of a trustee emeritus who has been accused of turning a blind eye to sexual abuse.
By Sarina Trangle

A review by the Bronx District Attorney’s Office has found that a systematic pattern of alleged sexual abuse existed at Horace Mann School, with reported incidents occuring over four decades.

The District Attorney’s April 26 press release, which summarized its review, helps confirm what alumni have already started to uncover.  But the DA’s office is the first official body to conduct an inquiry and to release its findings, which include allegations of abuse from 1962 to 1996.

But while the DA’s press release bolsters some of their claims, there are victims who still feel doubly abused by the school’s response to the allegations.

Horace Mann’s response is particularly significant in light of the fact that Bronx DA Robert Johnson says his office cannot prosecute any of the incidents that came up in its investigation because they all exceed the state’s statute of limitations.

At the urging of the City Council, the district attorney’s office set up a hotline over the summer for alumni to anonymously report abuse. Investigators from the DA’s child abuse and sex crimes bureau worked with the NYPD Bronx Special Victims Squad to interview 60 people — about 25 of whom said they were abused — in New York, California, Colorado and Vermont over a ten-and-a-half month period.