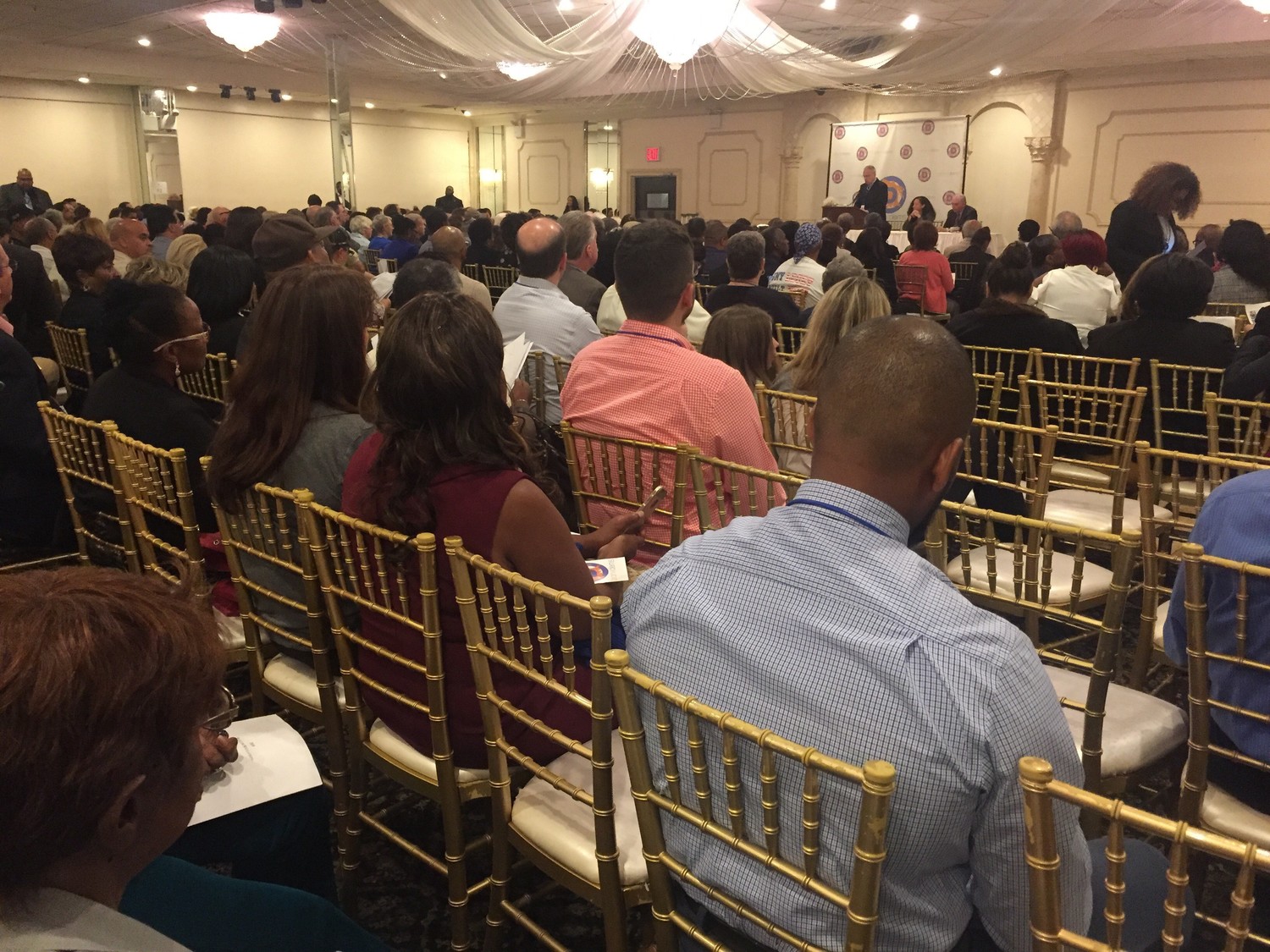 Bronx Democrats gathered in Eastchester Thursday night to, among other things, choose who will represent them on the ballot when it comes to supreme court judges.
MICHAEL HINMAN
Democratic Supreme Court Slate

Bronx Democrats have chosen eight people to represent them on the ballot as supreme court judges.

BEN BARBATO — Has been a civil court judge since 2006, but has worked on the supreme court since 2012 as an acting judge. Even while pulling double-duty, he was re-elected to the civil court in 2015. If he gets a permanent supreme court job, that would open up his seat, which expires in 2025.

MARY ANN BRIGANTTI-HUGHES — Served on the supreme court since 2005, and first became a civil court judge in 1997 after graduating from Temple Law School. She was censured in 2013, according to published reports, for having court employees run errands, and for what some claimed was her pushing her religious beliefs in the work place.

EDDIE McSHAN — Earning a law degree from Syracuse University, he became a civil court judge in 2012. If elected to the supreme court, his lower court bench will open up, as his current term is set to expire in 2022.

MARSHA MICHAEL — A one-time candidate for Assembly on the Working Families Party ticket, has been a judge on the civil court since 2015. Her current term is set to expire in 2025, meaning if she moves to the supreme court, her old slot will be vacant.

JULIO RODRIGUEZ III — Became an administrative law judge in 2006 for the city's Office of Administrative Trials and Hearings, and became a criminal court judge in 2013. He's also served as an acting supreme court judge since 2017. His election to the supreme court in a permanent capacity would leave an opening in the lower court with at least another four years on the term.

LLINET ROSADO — A former principal law clerk to Judge Robert Torres, earned her own spot on the civil court bench in 2012. Ascending to the supreme court will create an opening on the civil court, as her term is set to expire in 2022.

ELIZABETH A. TAYLOR — Became a civil court judge in 2009, and was up for re-election this year after advancing in the recent primary. Earned her law degree from Ohio Northern University School of Law.

ROBERT TORRES — A supreme court judge since 2005, he began his law career in 1978 after graduating from John Jay College of Criminal Justice, according to published reports. He first became a judge in 1995 in New York City's criminal court.

All the speculation that either defeated state Sen. Jeffrey Klein or Councilman Andrew Cohen would be nominated for a judgeship with the state supreme court appears to be for naught.

The Bronx Democratic County Committee chose the eight people they want to represent them on the November ballot, and none of those names included Klein or Cohen, although Cohen was chosen to nominate one of the judges — Elizabeth A. Taylor.

While many of the names were expected, the absence of both Cohen and Klein was somewhat of a surprise, especially since media reports suggested that first Cohen was up for a seat, and later Klein.

Klein had been rumored for one of the slots since he lost his state senate primary election to Alessandra Biaggi last week, while Cohen has been whispered as a potential bench nominee since late last year.

In a speech following the nominations, the Bronx Democrats chair — Assemblyman Marcos Crespo — called out some of the media that took his organization to task for accusing the group of politicizing the nominating process.

"We have incredible leaders who I believe have been insulted by those who were out there claiming that this process is a sham, and that the people nominated are political hacks," Crespo said. "I think you heard stories of men and women who represent the very best of us. Who are examples to our children. Who have earned this and deserve this, and are amazing jurists."

Crespo didn't shy away from the fact he backed Klein in the primary, but he's now offering Biaggi the same support for what is likely going to be a far-less contested general election in November.

"I respect what he's done for the years that he's served," Crespo said of Klein. "He deserves some respect for that. We congratulate our Democratic nominee in Alessandra Biaggi, and we will work with her. That's what we do as a party. We are not here to pick sides. We work together."

If Cohen had earned the nod, he likely would've been elected in the heavily Democratic Bronx, which would have opened up his council seat. Both former Community Board 8 chair Dan Padernacht and educator Eric Dinowitz — son of Assemblyman Jeffrey Dinowitz — have declared their interest in succeeding him, but it's unclear how Cohen's lack of ascension will affect those bids.

But not all is lost quite yet. Some of the supreme court appointments could create vacancies in the lower courts. There's a chance Mayor Bill de Blasio could appoint Cohen or Klein into an empty bench slot early next year.

However, if either are still eyeing a spot working in the supreme court, they'll have to wait until next September when Bronx Democrats get together again to nominate a slate of judges.