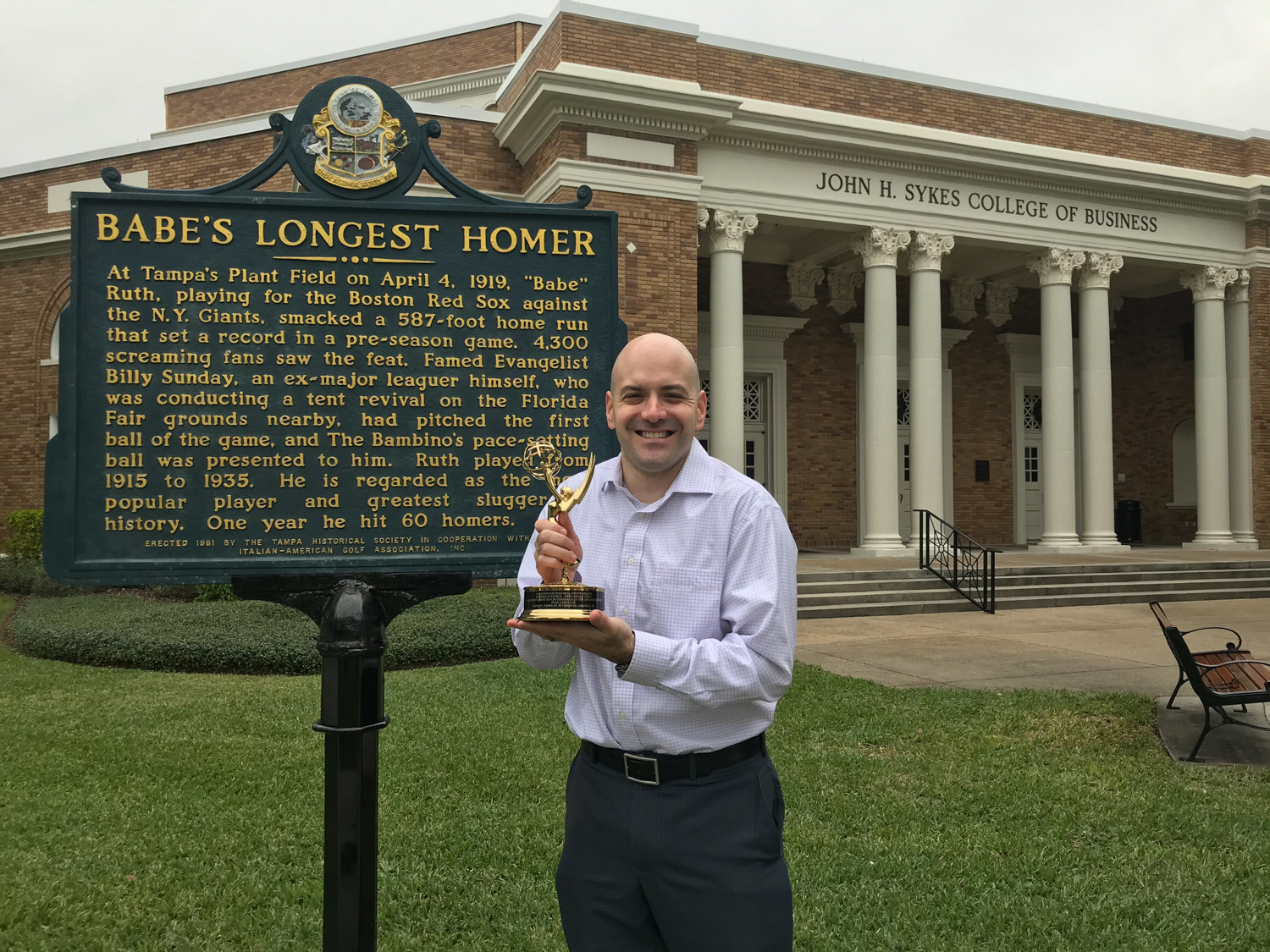 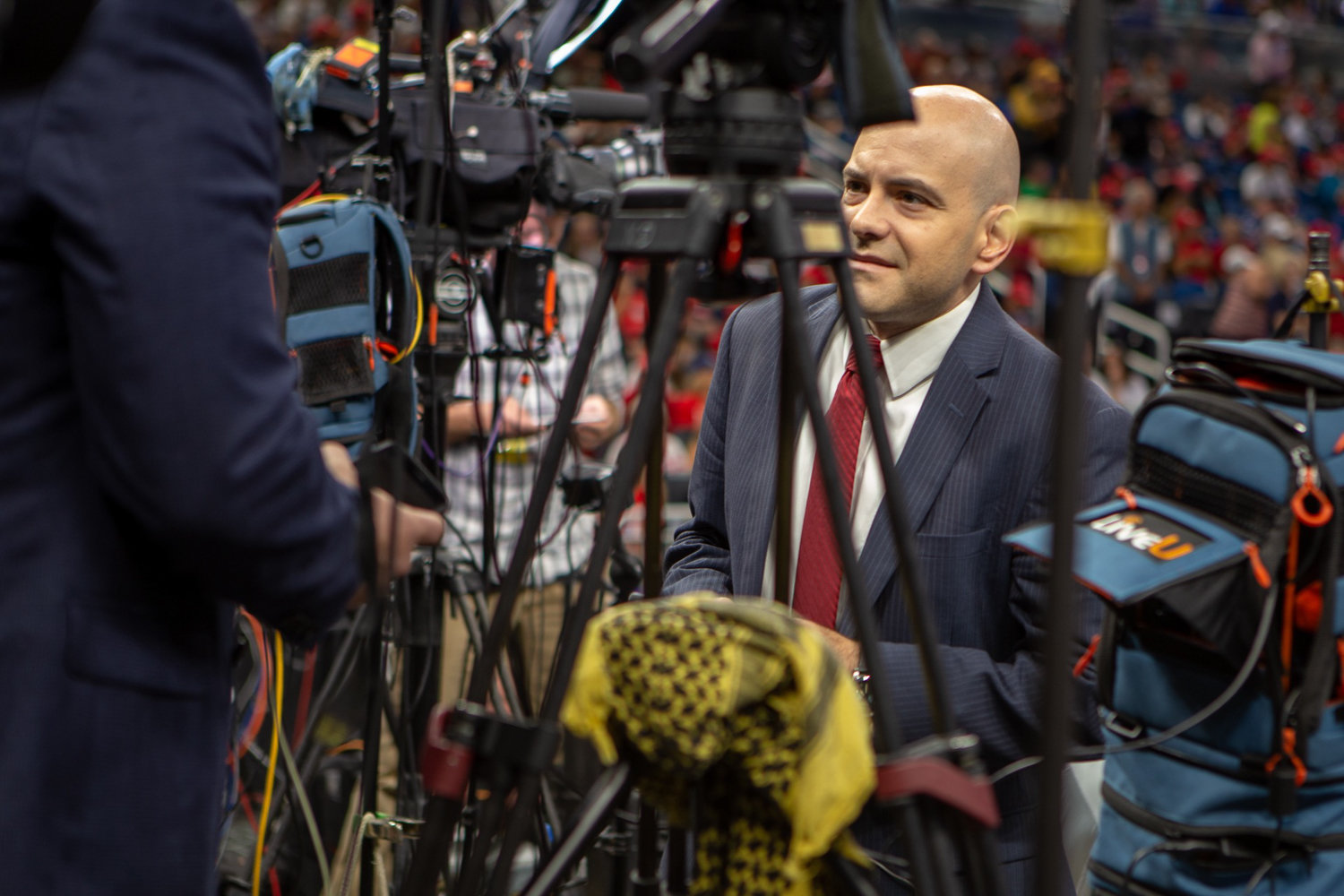 Evan Axelbank first found his calling to television as a teenager thanks to his father, Gary Axelbank, back when he worked as a segment producer at WNBC. The younger Axelbank worked his way to Syracuse after college, and then Rochester, before making his way to Florida. He’s now an Emmy-winning reporter for WTVT-Channel 13 in Tampa.
Courtesy of Evan Axelbank 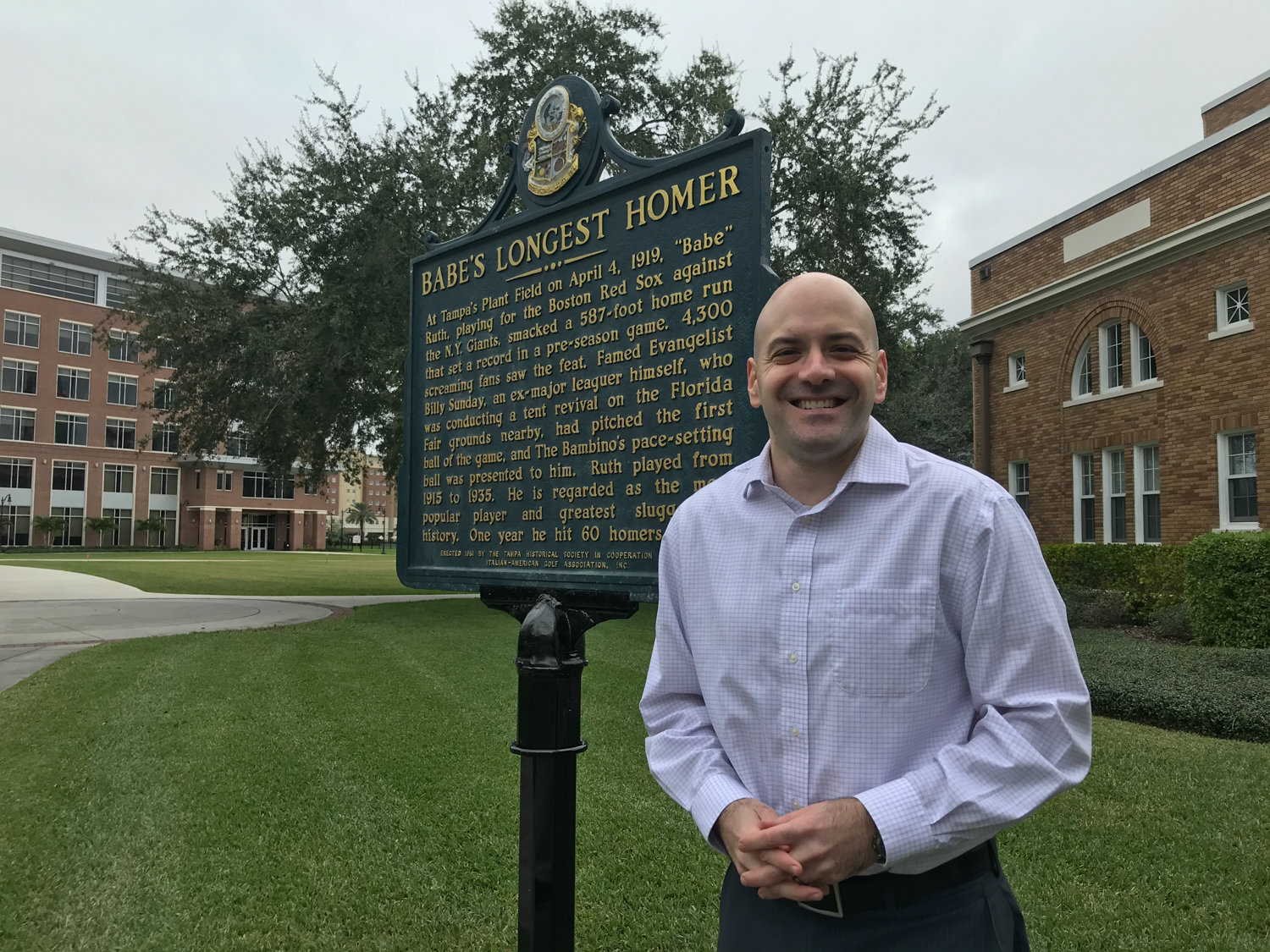 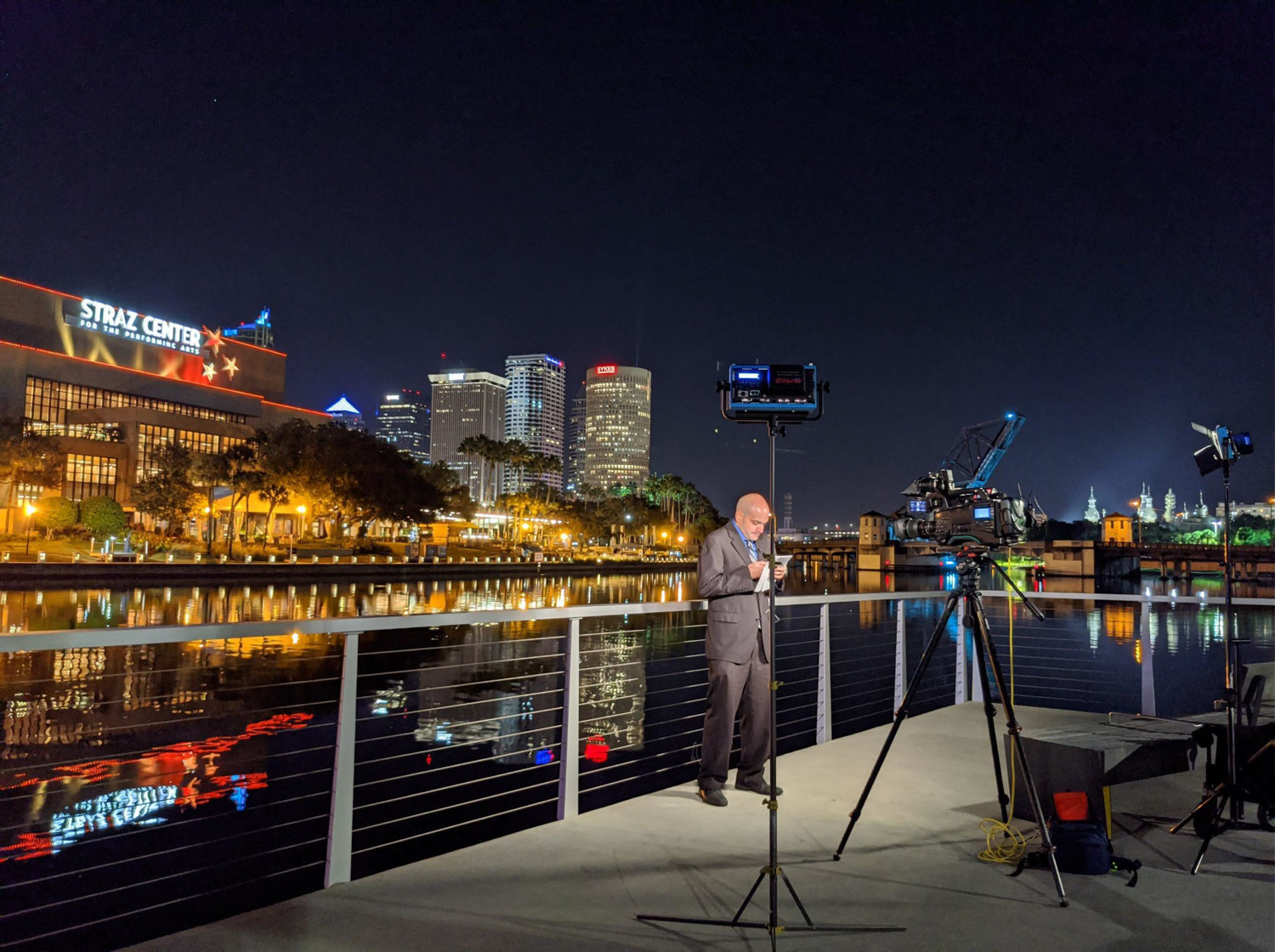 Evan Axelbank first found his calling to television as a teenager thanks to his father, Gary Axelbank, back when he worked as a segment producer at WNBC. The younger Axelbank worked his way to Syracuse after college, and then Rochester, before making his way to Florida. He’s now an Emmy-winning reporter for WTVT-Channel 13 in Tampa.
Courtesy of Evan Axelbank
Previous Next
Did Babe Ruth really hit a 587-foot home run?

Watch it now at tinyurl.com/BabeRuthHomer

The ballgame was just under way at Globe Life Park in Arlington on a hot day last June. Chicago White Sox pitcher Reynaldo Lopez had already knocked out two Texas Ranger batters, while allowing another to reach first base.

But then Nomar Mazara stepped into the batter’s box. He was hitting a respectable .265 at this point, so Lopez wanted to be careful. But on a 1-0 pitch, Lopez missed with a fastball, perfectly placed for Mazara, who slammed it into the upper deck of the Texas baseball field.

When the dust settled, the home run was measured at 505 feet — a blast that if hit from the Riverdale Monument, would fall awfully close to the Riverdale-Yonkers Society for Ethical Culture meeting house on Fieldston Road.

Mazara’s home run is, by far, one of the longest in years. One of his teammates even told him it was the longest in history. That’s not true, however, because historians agree the longest home run belongs to none other than Babe Ruth himself. Just how far his longest home run was, well that’s another story — one told last year by a television news reporter with deep roots in this part of the Bronx. And thanks to the Bambino, Evan Axelbank has his own accolade to place on the mantle: an Emmy.

Axelbank, son of BronxNet television personality Gary Axelbank and wife Suzanne, is a television reporter for WTVT-Channel 13, a Fox affiliate in Tampa, Florida. He’s been nominated for a regional Emmy twice in the past, but winning on his third try came thanks to an observant colleague named Corey Beckman, and a real head-scratcher: Did Babe Ruth really hit a ball 587 feet in the summer heat of Tampa a century ago?

According to reports of the time, Ruth and his Boston Red Sox were playing a preseason game against the New York Giants in front of 4,300 spectators at Tampa’s Plant Field on April 4, 1919. The field — which doubled as a racetrack — was next to what was then the Tampa Bay Hotel, a 511-room palace complete with minarets built by railroad magnate Henry B. Plant.

There was no Statcast at the time, automatically measuring long balls like those that were regularly struck by Ruth’s bat. But everyone, including ex-Major League baseball player Billy Sunday, was convinced Babe Ruth hit the ball a distance between the Riverdale Monument and An Beal Bocht Café on West 238th Street.

The old hotel still stands today, but now it’s part of the University of Tampa. The ballfield is gone, long ago making room for college buildings like the Sykes College of Business Center. In front of that building, however, is a historical marker erected some years ago celebrating Ruth’s feat. And it’s one Axelbank said he wanted to learn more about.

“As soon as Corey said to me, ‘587 feet,’ I knew the opening shot of the story,” Axelbank said. He wasn’t thinking Mazara, but something a little deeper in the past, like former San Francisco Giants star Barry Bonds.

“I said right away, that Barry Bonds home run,” Axelbank said. “What does 500 feet look like? I said that’s got to be the opening shot because that is the longest one I’ve ever seen.”

Getting to Tampa has been an interesting journey for Axelbank, and one that he fully credits to his father. A longtime television producer and host, the older Axelbank was almost always in a television studio. And it was in one of those studios when Evan, at just 15, got his calling.

“I’ve only had a few epiphanies in my life, but one of them was when my dad was a segment producer at WNBC,” Axelbank said. “I was sitting there with him at work, and I was watching how they did stuff behind the scenes. And I’m telling you, I remember the moment from one second to the next. It was a like a light went on in my head. And I said, ‘This is what I want to do.’”

For Gary Axelbank, of course, having one of his children follow in his footsteps is something that would make just about any parent’s dream come true. But Gary never pushed.

“My dad was so good at exposing me to the right things at the right time,” Axelbank said. “He never pushed me too fast. The No. 1 lesson he ever taught me was that it’s never about you. The story is never about you. You are never more important than the people you’re interviewing.”

That wouldn’t be hard to achieve if Axelbank had to interview the Sultan of Swat himself. But then again, Babe Ruth has been dead for more than 70 years. Instead, he depended on experts like scholar Jane Leavy and home run cataloguer Bill Jenkinson. He studied numerous accounts of the hit at the time, and even explored old meteorological records that gave wind speed at the time Ruth swung his bat.

At the end of it all, Axelbank found himself standing at home plate at Steinbrenner Field, the New York Yankees’ spring training home, demonstrating to Fox 13 viewers how far Ruth’s ball would have had to travel (spoiler alert — it would land near neighboring Raymond James Stadium, where the Tampa Bay Buccaneers play).

Winning the Emmy is just the latest milestone in Axelbank’s career, which started in Syracuse in 2005, continuing to Rochester and then West Palm Beach, Florida. He moved to Tampa in 2014, and has put down roots in central Florida. In fact, wife Haley Hinds is a weekend anchor at Fox 13.

With awards like the Emmy under his belt, Axelbank could very easily eye the nation’s largest media market, and return home to New York. But then again, it is Florida.

“We have a great situation here, and I love what I’m doing,” Axelbank said. “And I love where I am doing it. And I love who I’m doing it for. And my wife feels the exact same way.

“Look, if you’re taking every story seriously, you should never feel like you’re in a small market. Because for the people who live there, like me, it’s market No. 1.”