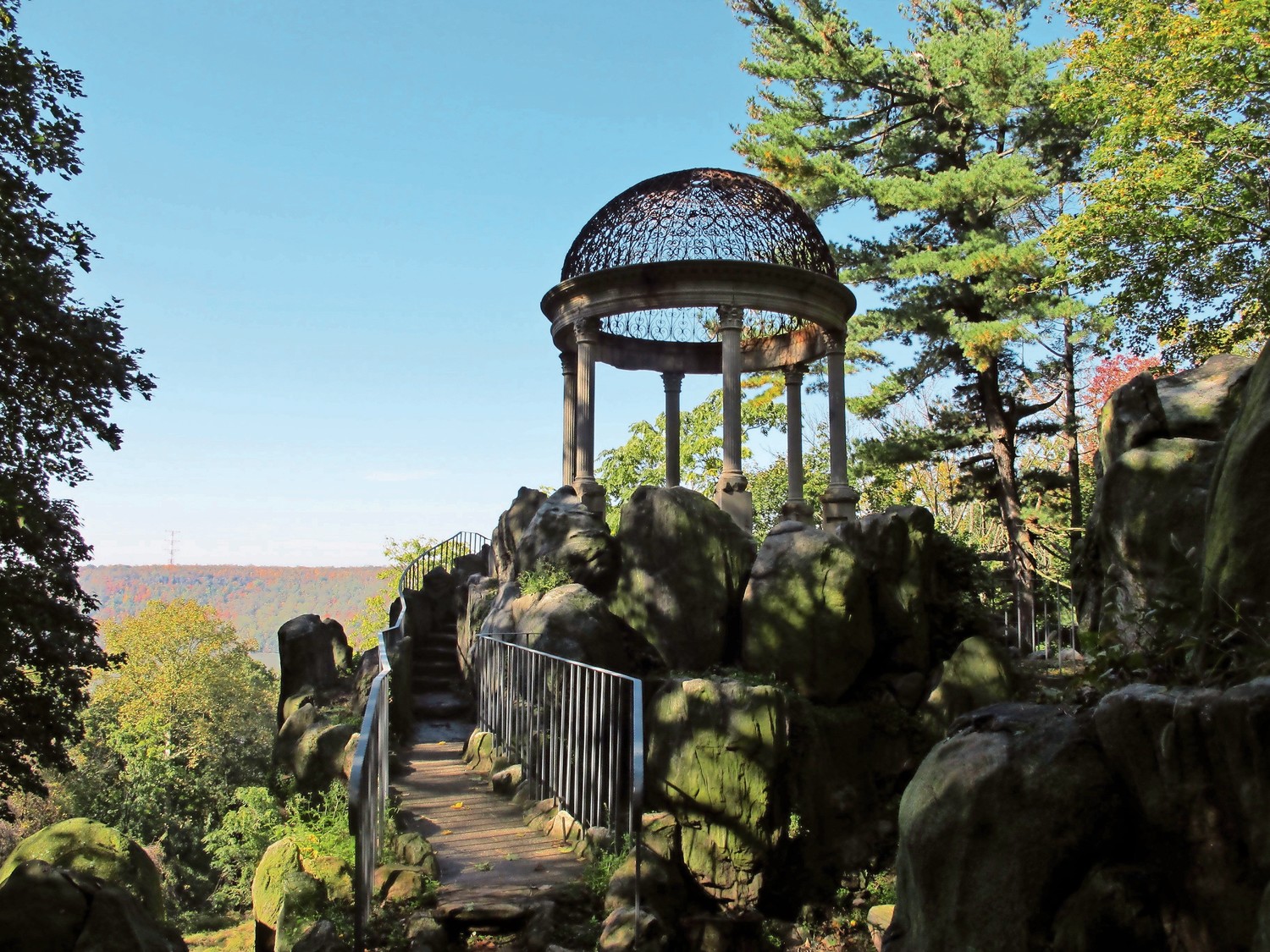 There is a lot of history at Untermeyer Gardens in Yonkers, dating back to wealthy hat manufacturer John Waring and culminating with lawyer Samuel Untermeyer.
Courtesy of Kristine Paulus
By SURA JESELSOHN

Years ago, I chanced on Untermyer Park. I remember green lawns and the ruins of some stone structures, but nothing more.

In answer to a call for suggestions for topics for future columns, several of my readers independently recommended Untermyer Park (945 N. Broadway, Yonkers) in the most glowing terms. With the excuse of needing to entertain an overseas guest, we visited last week. I am rarely speechless, but we were both totally overwhelmed by the grandeur of the restoration.

Samuel Untermyer is not a name I recognized. However, a successful lawyer who says, “If I could do it over again, I would want to be parks commissioner of New York City,” is someone special and worth investigating.

Born in 1858 in Lynchburg, Virginia, to Isadore Untermyer and Therese Laudauer, Jewish immigrants from Bavaria, the family moved to New York City upon the death of Isadore in 1866. His widow bought a tenement and opened a kosher boarding house.

Samuel was educated at City College — already founded in 1847 — and received his law degree from Columbia Law School. He practiced law for 45 years at Guggenheimer Untermyer & Marshall.

Although a successful lawyer and investor, he was deeply  interested in the protection of the public and its institutions from corruption through increased government regulation.

He was a Zionist and president of the Keren Hayesod (Jewish National Fund), which was founded in London in 1920 to raise funds to bring about Jewish return to the land of Israel following the Balfour Declaration of 1917. That declaration announced British government support for the establishment of a “national home for the Jewish people.”

He became president in 1933 of the Non-Sectarian Anti-Nazi League, originally named the American League for the Defense of Jewish Rights when founded by the Yiddish journalist Abraham Coralnik. The league attempted to enact an economic boycott against Nazi Germany.

The estate history began in 1865 when John Waring, a wealthy hat manufacturer, bought 33 acres from the Bolmer estate, which he enlarged by an additional purchase of another 63 acres, also from Bolmer. He hired John David Hatch to design and build his 99-room, $500,000 mansion named Greystone for the type of granite used in its construction.

Due to financial reversals, Waring sold the estate to former Gov. Samuel Tilden, who purchased an additional 46 acres and built numerous greenhouses on the property. In 1899, Untermyer bought Greystone from the Tilden estate, and eventually added some adjacent land to the north, enlarging the estate to a total of 150 acres.

In 1916, Untermyer hired William Welles Bosworth, an architect and landscape designer trained at the French school Ecole des Beaux Art, to design his various formal gardens. Bosworth also is known for the design of the Cambridge campus of MIT and Kykuit, the Rockefeller family estate in Sleepy Hollow.

Untermyer opened his home and gardens to the public every Tuesday for 25 years. There was a record 30,000 visitors on one particular day in 1939 when the chrysanthemums reached peak bloom. The property eventually employed 60 full-time gardeners and contained 60 greenhouses, some devoted to Untermyer’s  special interest, orchids.

Upon his death, he wished the property to be transferred to a state entity. However, without an endowment included to fund the maintenance properly, government interest was limited. In 1946 the City of Yonkers accepted 43 acres, which became Untermyer Park before selling off the balance of the land.

Part of that land to the north was built over to become the present-day St. John’s Hospital. The mansion itself was torn down in 1948, and the property went into decline.

The first effort to restore the estate began in 1972. In 1974, Untermyer Park was included in the National Register of Historic Places. However, the park once again fell into decline.

Enter the Untermyer Gardens Conservatory, founded in 2011 by the Riverdalian architect Stephen Byrns. A founding partner of BKSK Architects where he worked for more than 30 years, Byrns left the firm in 2016 to devote himself full-time to the restoration of Untermyer Gardens. (One of Untermyer’s great-granddaughters is chair of the conservatory.)

Marco Polo Stufano, who designed the gardens at Wave Hill, advised the conservancy about plantings of the restored Untermyer Gardens.

Next time, we’ll move on to the magnificent gardens and the various garden structures themselves.