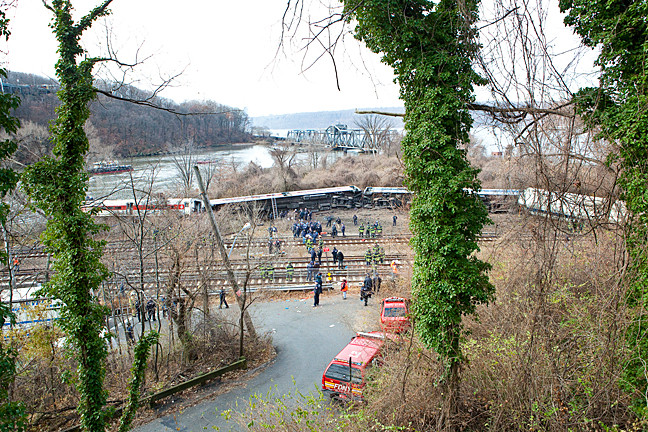 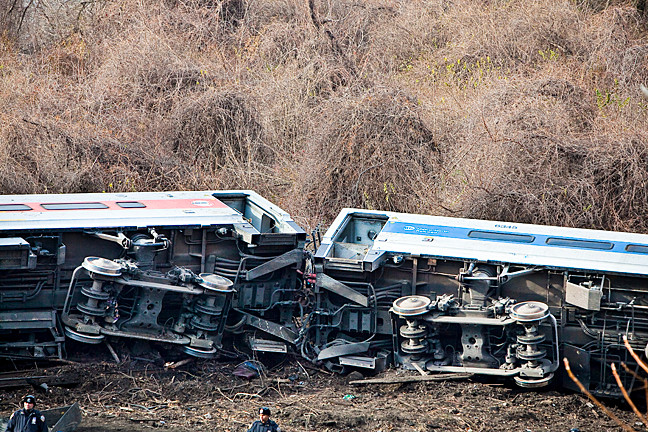 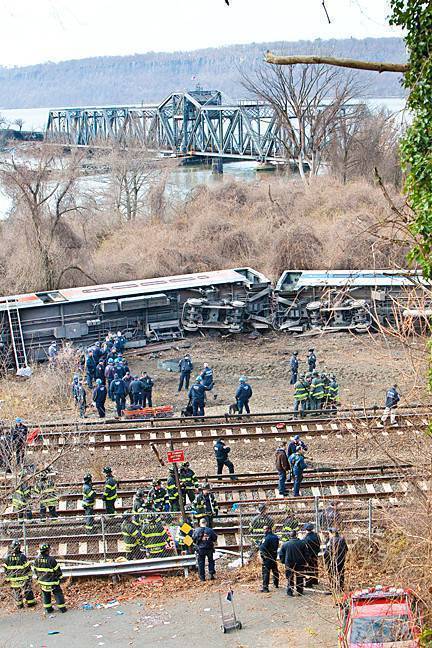 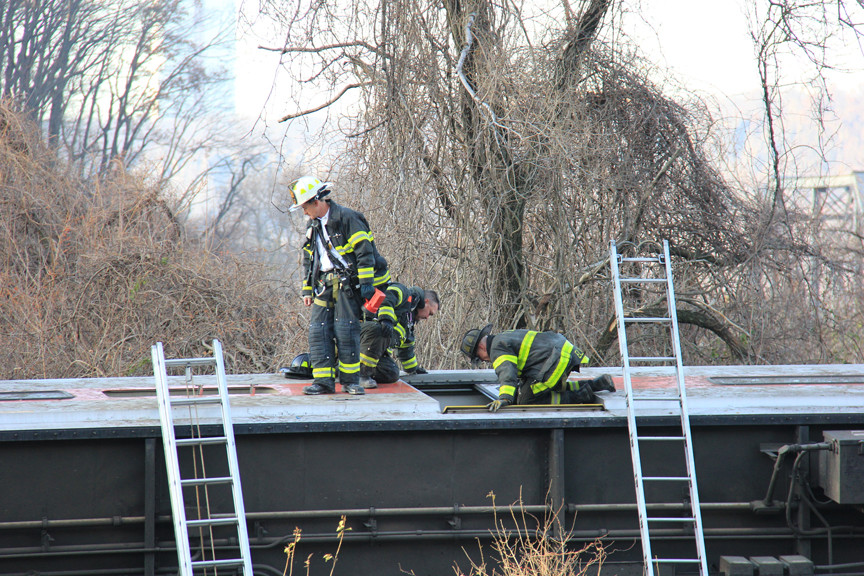 Firefighters climb up onto overturned train cars to rescue riders trapped inside.
Photo by Nathan Muir 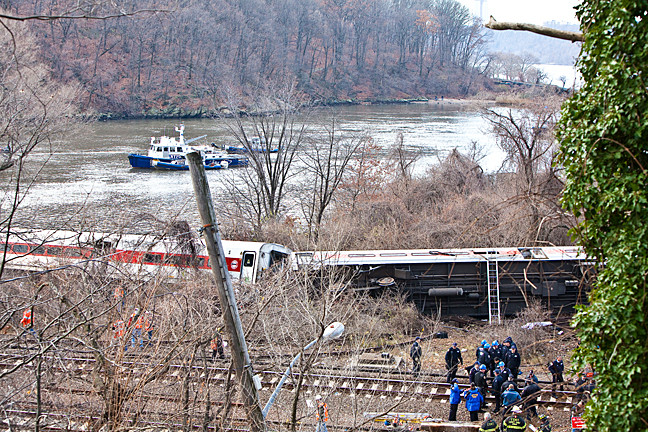 Police boats and divers checked for passengers they feared had been thrown into the river.
Photo by Marisol Diaz/The Riverdale Press 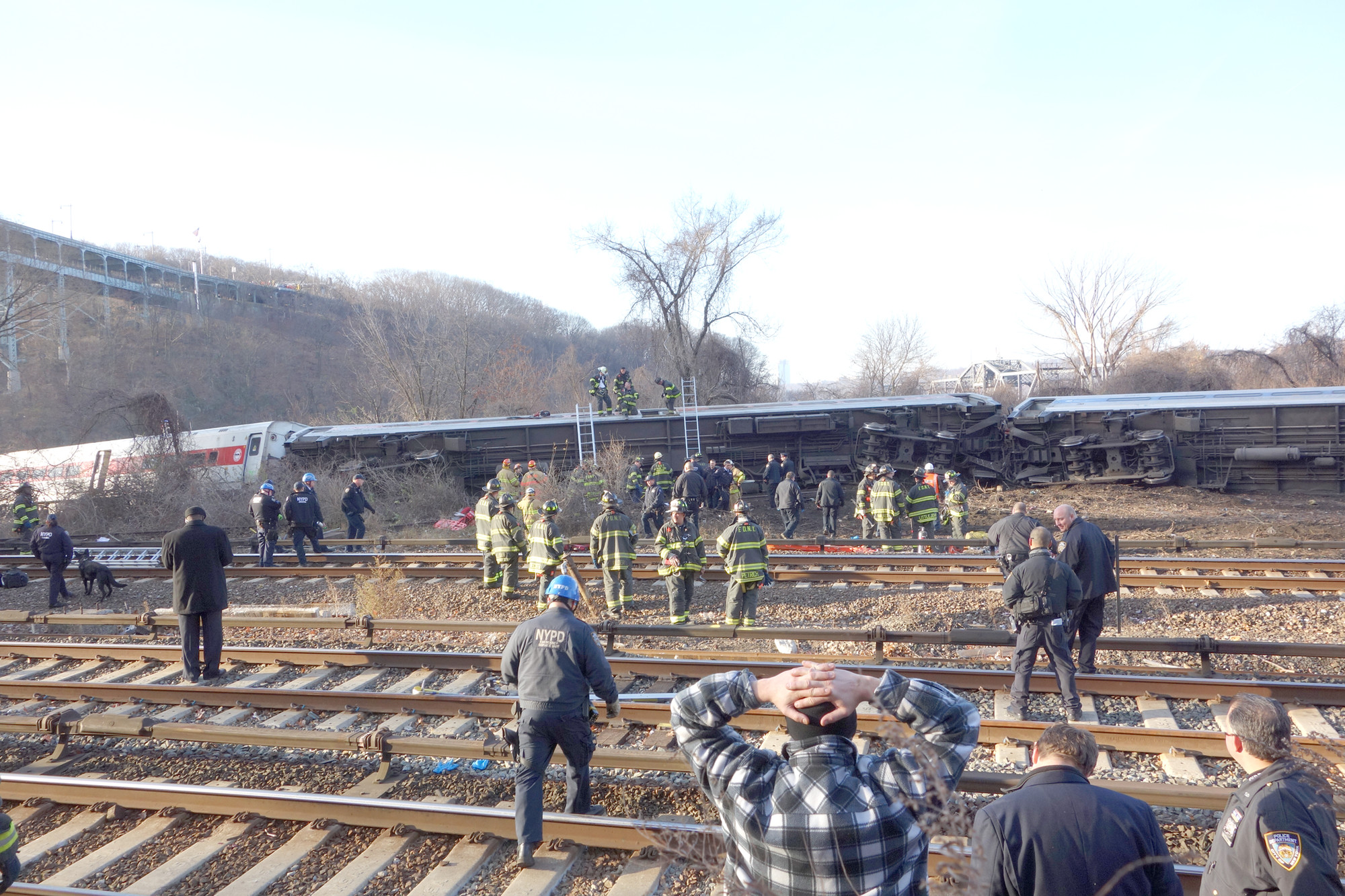 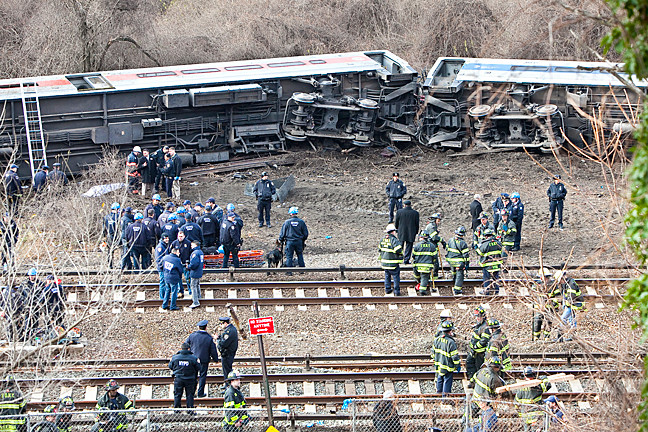 Officials at the scene oversee the recovery and begin an investigation of the derailment.
Photo by Marisol Diaz/The Riverdale Press 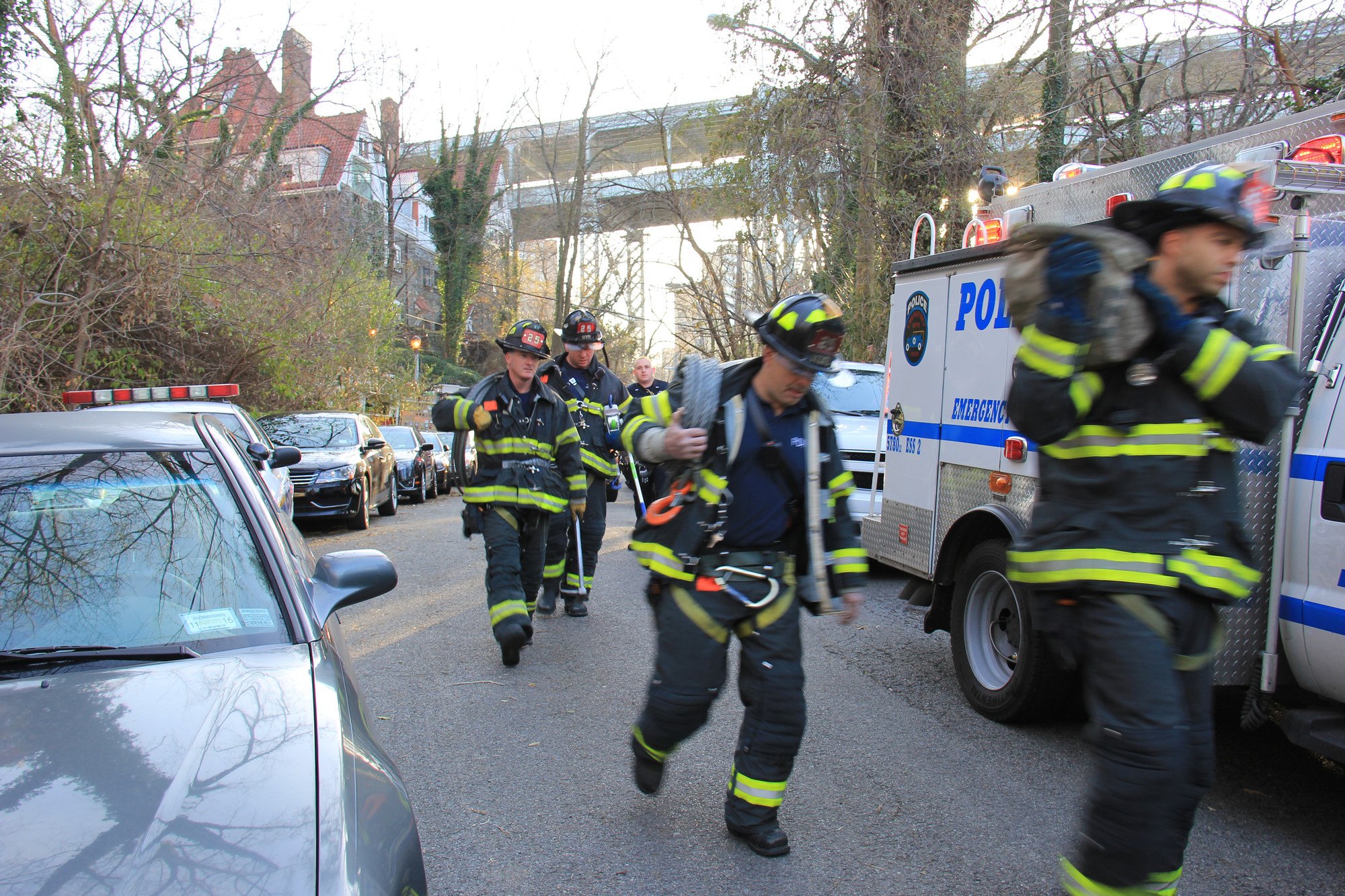 Everyone on the scene praised emergency workers including EMT paramedics, firefighters and police for their quick response and efficient work.
Photo by Nathan Muir 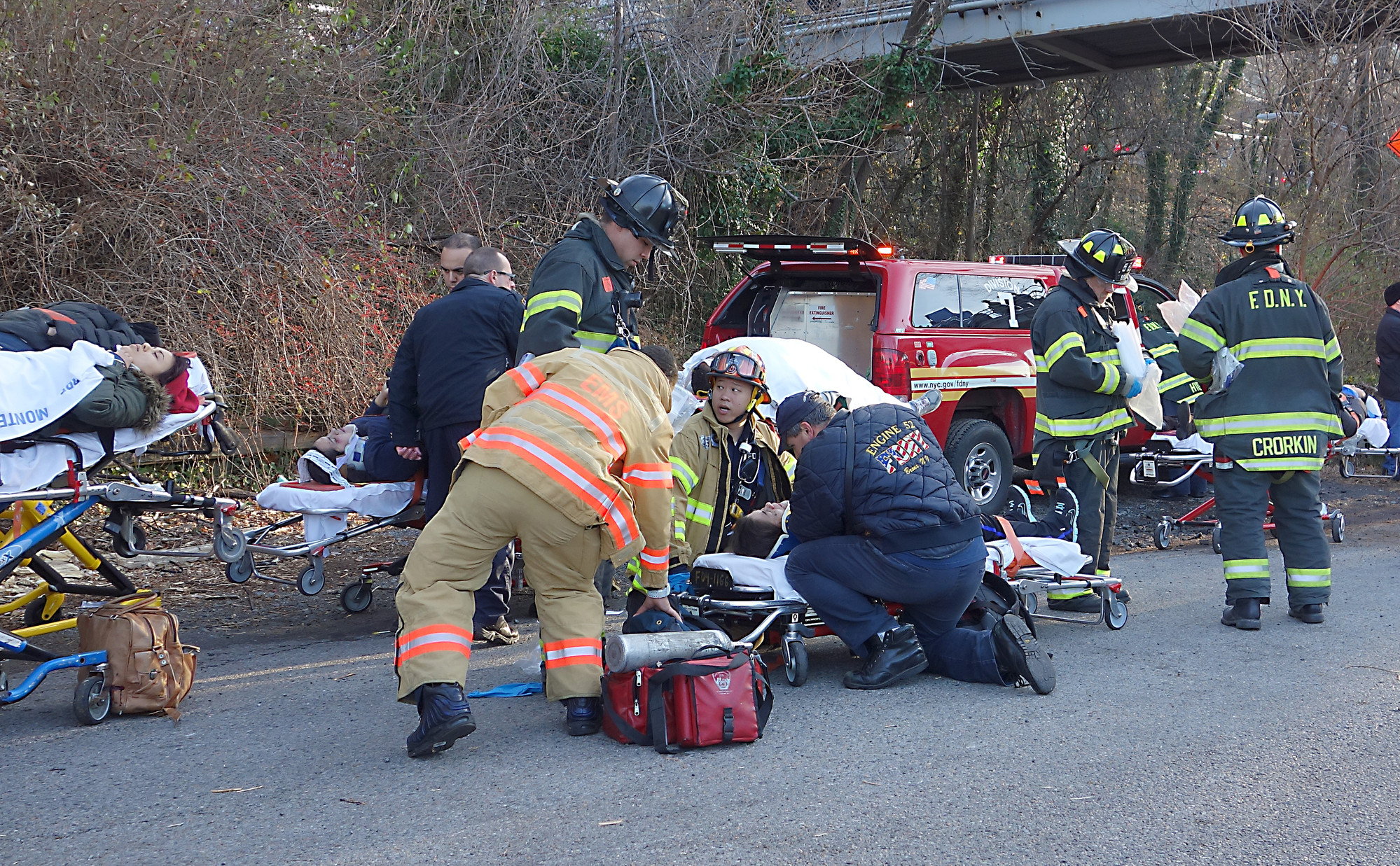 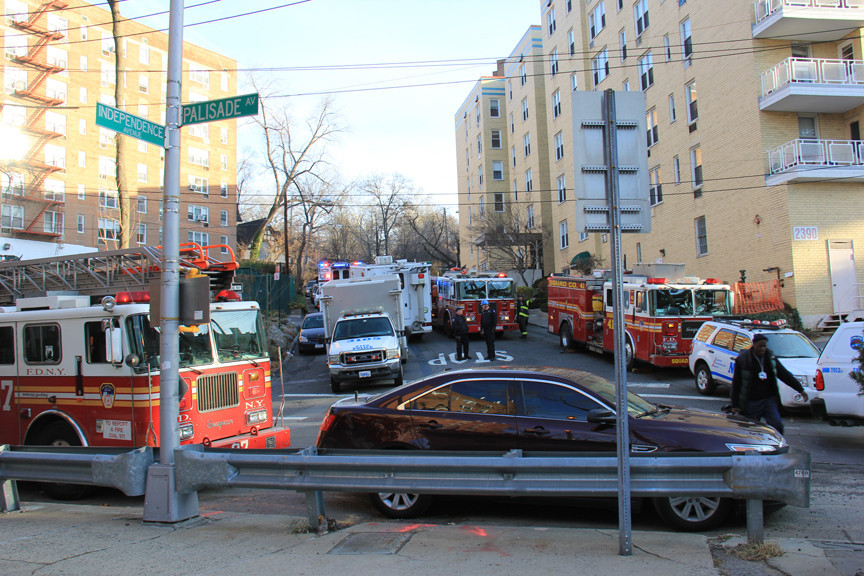 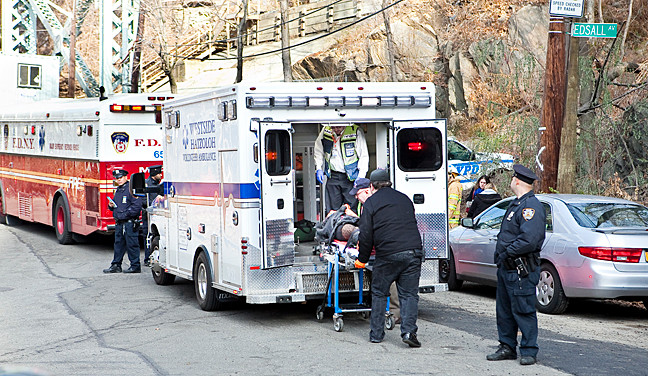 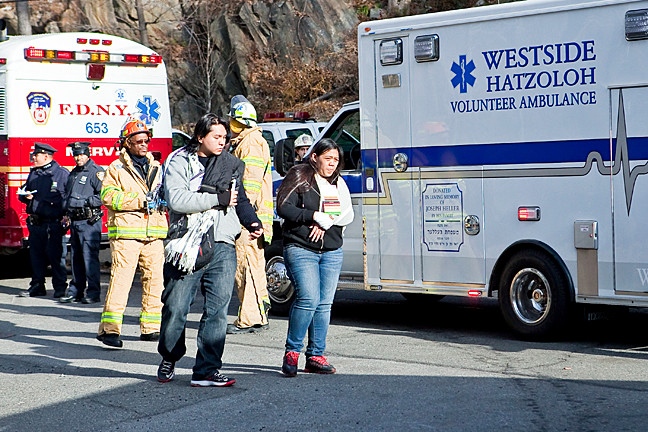 Survivors of the MTA Metro North derailment walk towards an ambulance on Edsall Avenue.
Photo by Marisol Diaz/The Riverdale Press 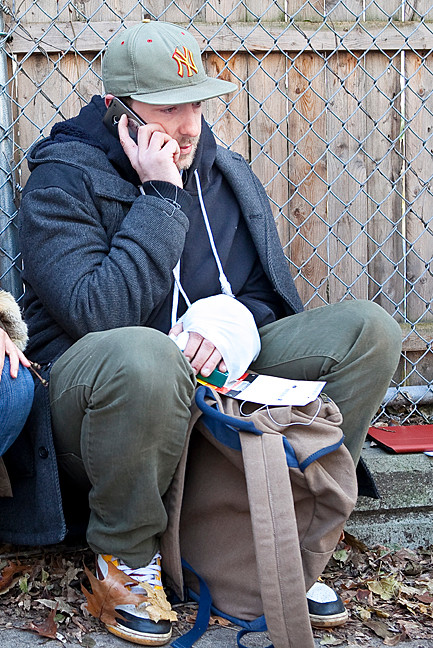 Ryan Kelly, 27 a said he was asleep when it happened. He woke and saw "people flying all over."
Photo by Marisol Diaz/The Riverdale Press 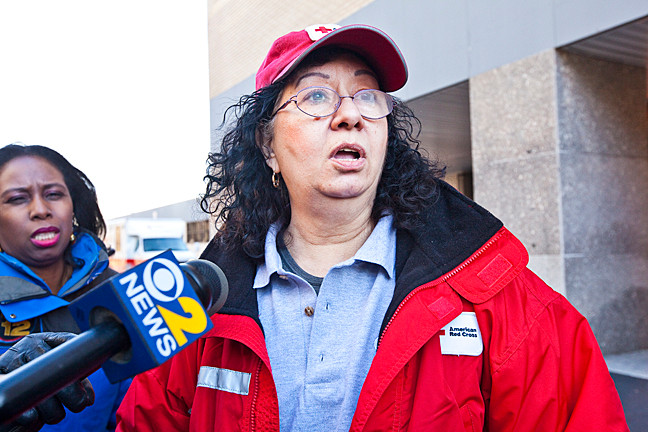 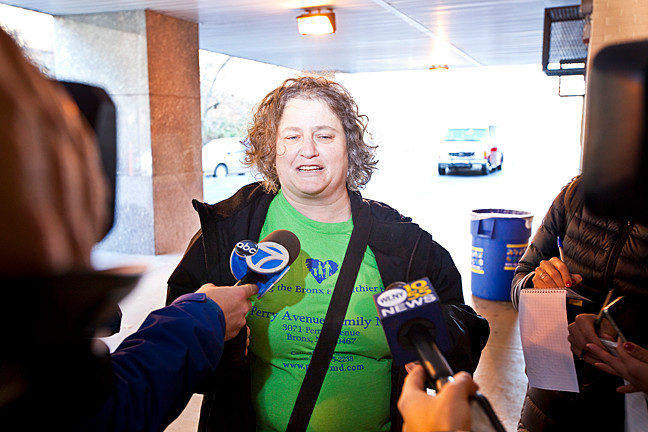 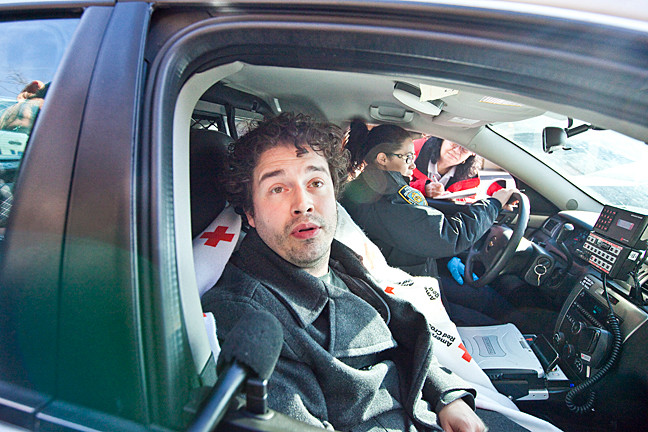 Steven Ciccone, 29, says he sat on the right side of the Metro North train that was derailed near the Spuyten Duyvil station.
Photo by Marisol Diaz/The Riverdale Press 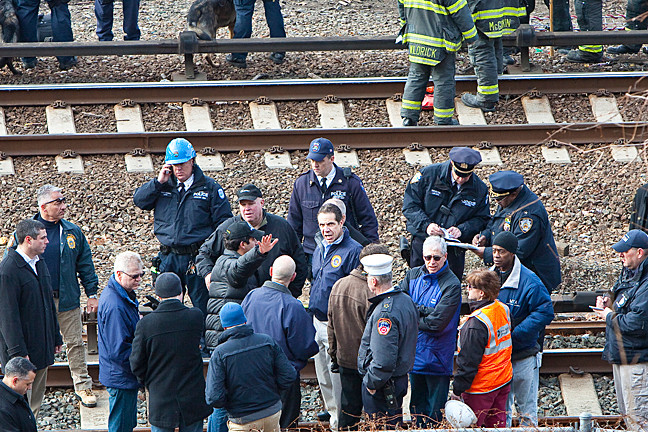 Governor Andrew Cuomo, Chairman and Chief Executive Officer of the MTA Board Thomas F. Prendergast and other officials survey the site of the crash.
Photo by Marisol Diaz/The Riverdale Press 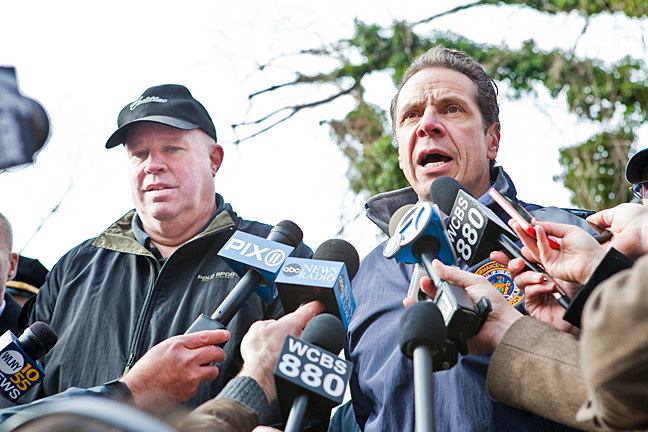 Governor Andrew Cuomo and Chairman and Chief Executive Officer of the MTA Board Thomas F. Prendergast hold a press conference at the crash site.
Photo by Marisol Diaz/The Riverdale Press 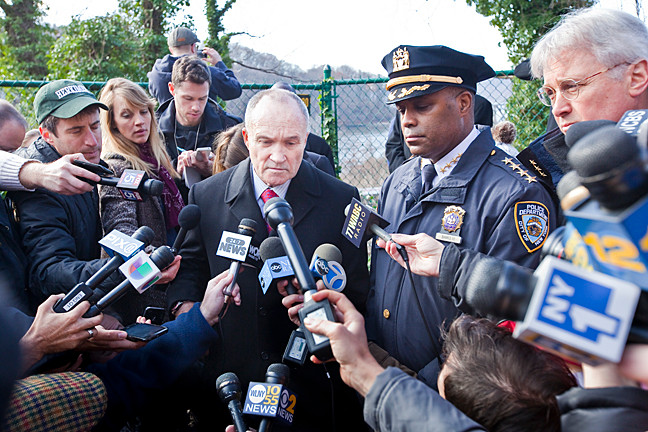 The calm of a sunny Sunday morning was shattered at around 7:20 a.m. when a southbound Metro North commuter train jumped the rails as it rounded the curve into Spuyten Duyvil station, injuring 63 passengers and killing four, according to Edward Kilduff, Chief of the Fire Department of New York (FDNY).

The diesel locomotive slid so far towards the Harlem River that it was obscured from the view of observers on the station bridge. What was visible was a tangled mass of passenger cars lying on their sides, another teetering at a forty-five degree angle. The two cars furthest to the rear remained on the tracks fully detached from the train.

“I just heard and then felt a shudder and it turned over,” said passenger Steven Ciccione, 29, a Long Island resident who was sitting on the right side of the third car when the train crashed. “People were falling on top of me and screaming. People were also trying to help each other.”

Peter Stillman, a white-haired Manhattan resident, was a passenger on the train who escaped without injury. Standing on Palisade Avenue with a large wheeled suitcase, he tried to make sense of what he had experienced.

“I was sleeping with a mask on, when I was awakened by a jolt and a crushing and grinding sound,” Mr. Stillman said. “Then my head was smashed up against the back of my chair and then we stopped. I remember being afraid that we were going to hit something harder.  Many, many people were hurt badly. I don’t know if anyone was killed. There was blood all over the cars.”