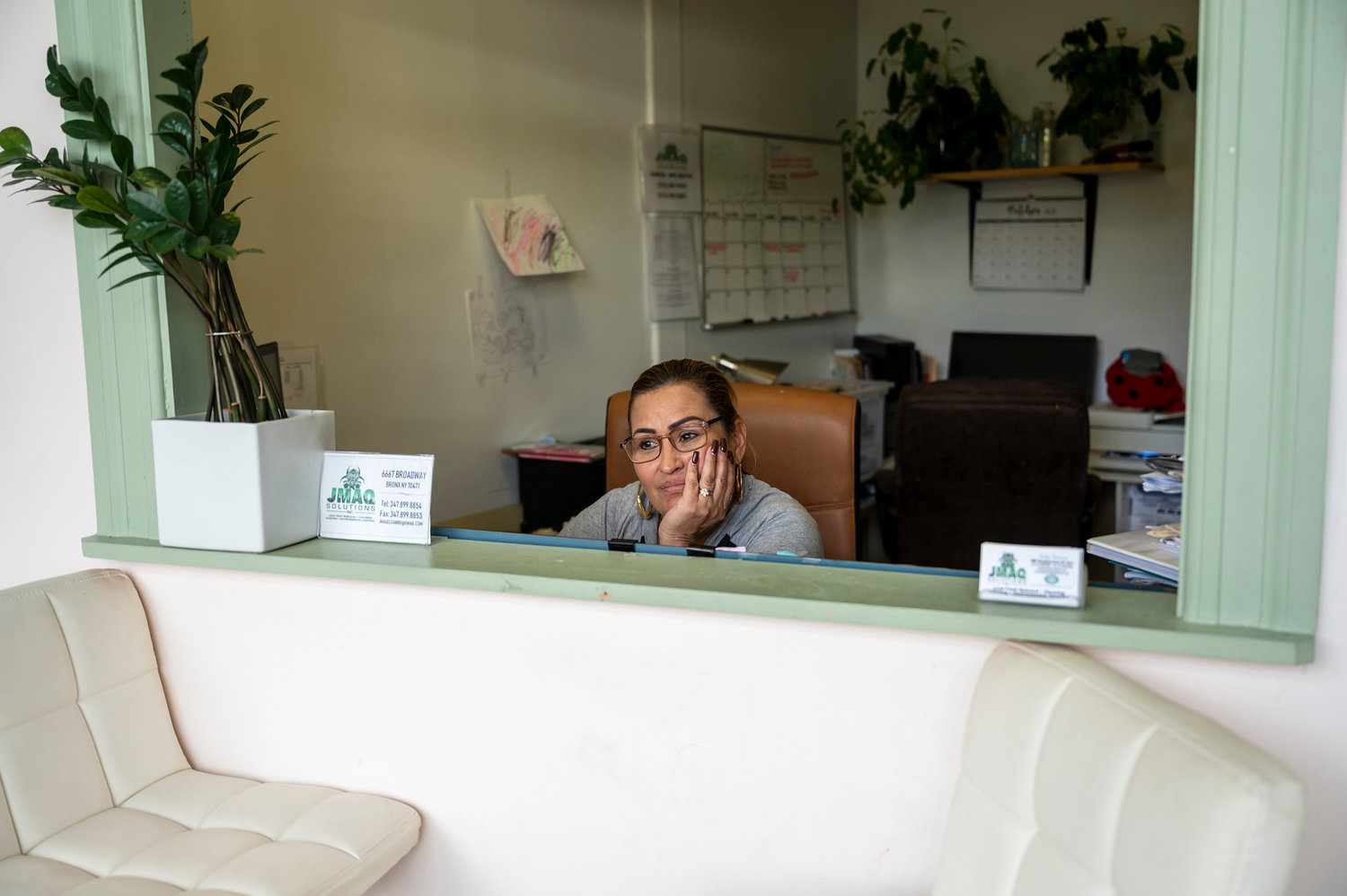 Jackie Maquilon helps her family at the front desk of JMaq Cleaning Solutions on Broadway and West 262nd Street. They have been collectively running the business since her ex-husband died last spring. If the city moves forward with its plan to build a men’s homeless shelter at 6661 Broadway, the family would have to part ways with their business location.
HIRAM ALEJANDRO DURÃN 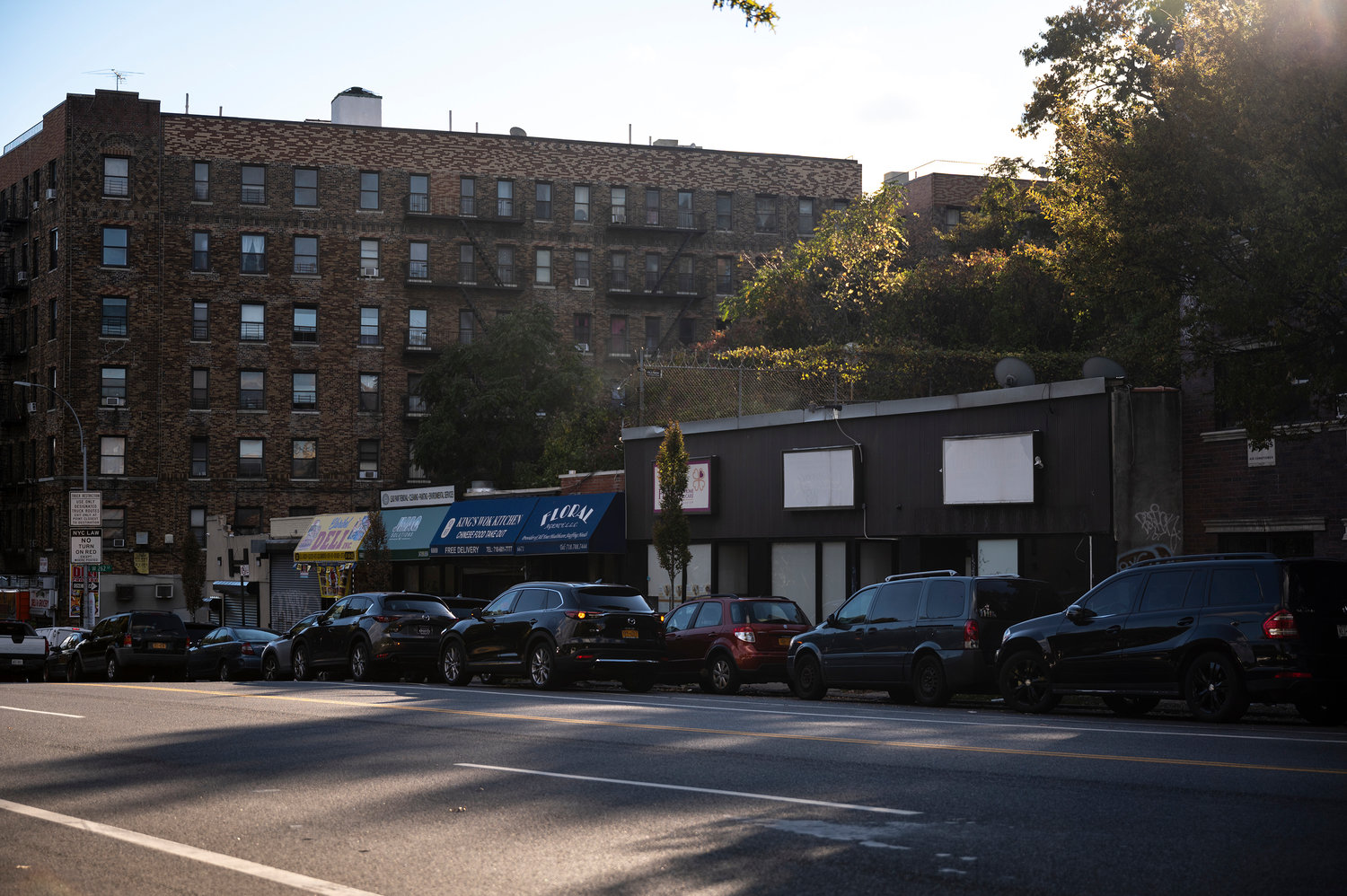 King’s Wok Kitchen has been a fixture on Broadway and West 262nd Street for 25 years. However, that could all change if the city finalizes plans to develop its 6661 Broadway men’s homeless shelter right in the takeout restaurant’s space.
HIRAM ALEJANDRO DURÁN
Previous Next
Support journalism

For some, the city’s plan to place a men’s homeless shelter at 6661 Broadway is troubling. For others, it’s personal.

Ruby Dong and her family are among those who stand to lose something close to them if the city moves forward. They’re owners of King’s Wok Kitchen, a takeout restaurant that has operated from 6669 Broadway for 25 years.

It’s a place Dong has known all her life, largely because she was born two years after her parents started the business.

“Growing up, I’ve been helping my parents out in the restaurant,” she said. “If you ask people that live in the area or go to the restaurant, they can tell you I’ve been there since I was a kid helping in the front taking all the orders.”

Dong grew up in North Riverdale and attended school in the area all the way up through college. For the most part, it’s the only place she’s ever known. Now that may have to change for reasons beyond her family’s control.

That’s because while the city’s plan to build a homeless shelter is using a 6661 Broadway address, the entire project spans several lots, including the 6669 Broadway location Dong’s family business is located. If the city does move forward, the Chinese restaurant would be one of several tenants forced out by the new landlord, the African American Planning Commission.

King’s Wok is one of five businesses situated along that strip, including Claribel Deli and Floral Home Care, a health aide firm. Three of those other businesses are owned or founded by immigrants.

“Having us to move (to build) a homeless shelter is pretty unfair,” Dong told Community Board 8’s land use committee earlier this month.

The family first found out about the shelter after a super in their building asked if they were moving. The question puzzled Dong’s father because, up until that moment, he hadn’t heard anything about what the city had planned there — not even from his landlord.

“We called him a couple of days later after we found out, and he essentially told us that there was an offer on the table,” the younger Dong said, “but it hasn’t gone through yet.”

Dong’s family signed a four-year lease extension just last year. So naturally, they thought they would be safe from any attempts to evict them.

However, they recently found out that wasn’t exactly the case. The chances of the lease holding up in court may not be as strong as they thought.

“We consulted with a lawyer,” she said. “And essentially, they told us the 180-day notice clause in our lease is valid. So, the landlord has every right to” use it. That means the landlord can boot King’s Wok out of its space with just six months notice — even if time remains on the lease.

Her father has considered picking up and starting all over again if they are forced to move, but Dong says the lack of retail space for rent in the area would make it extremely difficult for them to stay in North Riverdale.

Another problem the family faces is finding a space that would accommodate the needs of a Chinese restaurant — including a specialized kitchen and a permit for the gas, which Dong said could take up to a year for approval.

If the city’s agenda to begin work on the shelter in 2023 holds up, the family is running out of time.

“By the time that’s approved, there’s no guarantee that the business that we had is still going to be there,” she said.

And the restaurant is a cornerstone in her family’s history.

“Basically, my parents invested their whole (life) into this restaurant,” Dong said. “When they first immigrated to America, they worked in other various restaurants, and then saved up to get this restaurant.”

Unfortunately, the Dongs aren’t the only family business owners impacted by the shelter’s move. Jackie Maquilon’s family also struggles to make sense of it all. JMaq Solutions is an environmental services company that offers lead paint removal and other cleaning and painting services.

It was founded in 1999, moving to 6667 Broadway a couple years ago. Since then, Maquilon and her family have dealt with the recent death of her ex-husband, JMaq founder Jose Maquilon. She now helps at the office while her eldest son, Sady, overlooks the company’s operations.

The added news of the impending shelter only adds more levels of stress during an already difficult time.

“My son and I were talking about it today, and he was telling me, ‘Mommy, what are we going to do?’” she said.

Maquilon confronted the landlord about the pending property sale, but says she was brushed off.

The idea of businesses being pushed out to create a single men’s homeless shelter did not sit well with some elected officials at the most recent CB8 land use committee meeting.

“I got to tell you,” Assemblyman Jeffrey Dinowitz said, “the idea that people who’ve worked hard for years — with small businesses getting slammed as it is — the idea that any of them will be put out of business in a very unceremonious way is really outrageous to me.”