If you think this camp’s unusual, you’re dead right 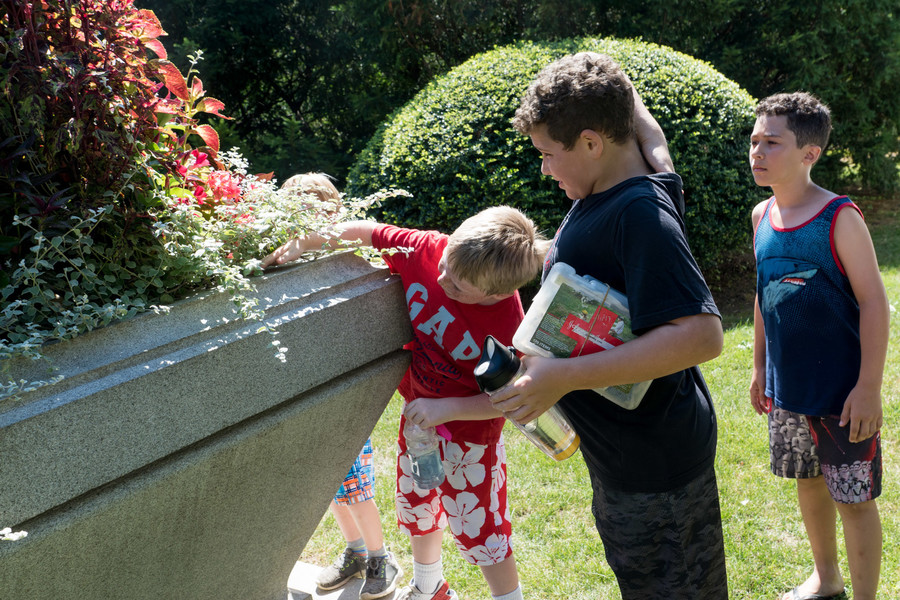 Campers take part in a scavenger hunt around the grounds of Woodlawn Cemetery. Kids at the camp learn about the art, history and people buried there.
Julius Constantine Motal 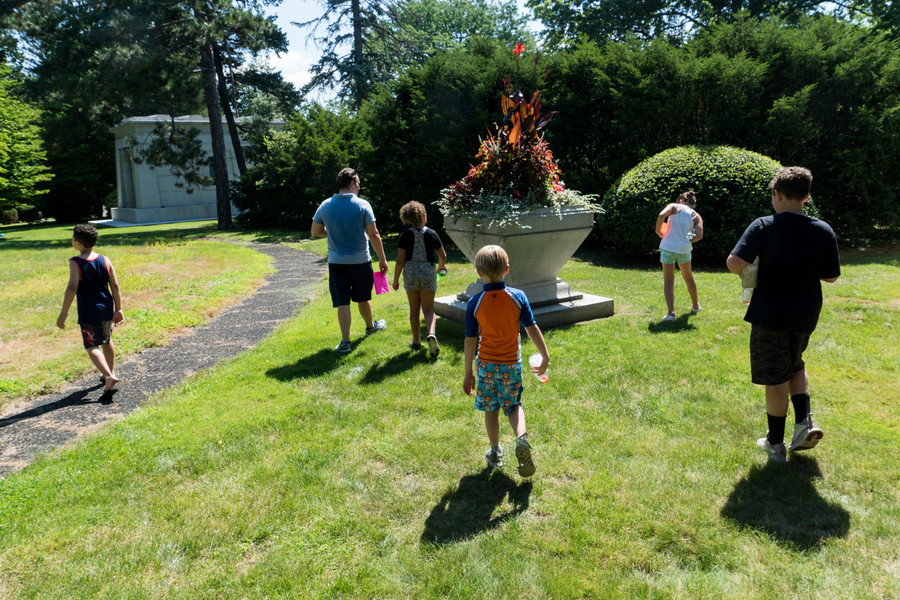 Woodlawn Cemetery wrapped up its third annual summer day camp last week. While a cemetery might seems like an unusual choice, students raved the location was a great place to learn about art and history — and make new friends.
Julius Constantine Motal
Previous Next
By Lisa Herndon

It’s a hot and humid late July morning, and these kids are outside running amongst the grass and trees. They’re taking part in a fun outdoor activity — a scavenger hunt — and they’re thinking hard about a riddle so they can get their next clue.

“The Woolworth family had a very nice store,” read the message on a sheet of paper. “I bet your clue is in the door.”

The answer, however, leads them to a mausoleum owned by the Woolworth family, who made their fortune through “five-and-dime” discount stores throughout the country.

Mausoleums, of course, are found in cemeteries. But these pre-teens didn’t have to find a cemetery as part of the scavenger hunt. They already were in one.

More than 20 students took part in a summer day camp hosted by Woodlawn Cemetery, spending the past two weeks learning about the art, architecture and even the famous people buried at the historic landmark. The idea of a summer camp inside a cemetery might strike many as an odd combination. Yet, the organizers — Jake Alrich and Susan Olsen — have realized the location, with a mix of open green space, mausoleums, and sculptures, could easily become a backdrop to a summer of learning and fun.

“I love this camp,” said Maggie O’Neill, 10. “It’s like the best camp I’ve ever been to. I like how we look around at all the famous graves.”

One of her favorites is salsa singer Celia Cruz, who died in 2003 and is laid to rest in a mausoleum of her own on the grounds.

Fellow day campers T.J. Nocerino and Elicia Shek-Doona agreed. In additional to learning about Cruz, students also had a chance to immerse themselves in salsa music.
“I was thinking why would (a summer camp) take part in a cemetery, but when I got here, I found out that it’s very interesting,” said Sean Murray, 9.

“When I first started, I was worried because it might not be that much fun because it was just a cemetery,” said Aine Curley, 10. “But, then when I got there, I met new friends and I had so much fun here.”

Elizabeth Cooney has been a counselor for the Woodlawn day camp the past three summers, and the program has given her a chance to see her community — where her family has lived for more than 50 years — in a new light.

“I didn’t realize we had this gem right here,” she said.
Cooney sometimes gets second looks when’s she tells people how she spent part of her summer.

“People will raise their eyebrows and I explain to everyone how amazing this place is,” she said. “I tell the stories that I’ve learned. People are amazed that Miles Davis is right here. That Tiffany stained-glass windows are right in our yard.”

Alrich founded the program after the Heckscher Foundation for Children awarded him a literacy and art program grant. During the school year, he housed the afterschool program at P.S. 19 Judith Weiss Woodlawn School, and he was looking for space for the summer component.

Now the day camp’s director, Alrich said he at first was “very dubious” about housing the program at Woodlawn, which is primarily known as a historic burial ground. But then again, despite living in the community for nearly a decade, he had never actually been to Woodlawn.

With its open green spaces, rich history and priceless art works, Alrich realized Woodlawn would be a great place and safe environment for students to learn and explore. And it’s worked so well for both that when the grant ended in 2016, Woodlawn took over as the summer program’s sponsor this year.

“Kids do not have any of the hang-ups we have about cemeteries,” Alrich said. “And once I started to see this place through their eyes, I realized that it was possible for them to build an emotional relationship with this place. The same way we all have special places from those childhood summers that are in our hearts.”

Having a summer day camp also was a way for Woodlawn to expand its relationship with the community, encouraging residents to become interested in the cemetery as well as the conversancy, said Susan Olsen, Woodlawn’s director of historical services. During the two-week session, some of her work included giving cemetery tours and teaching Woodlawn’s history.

She also wrote the clues for the scavenger hunts.

“If you don’t get young people to be stewards of a historic site, who’s going to care for it?” she said. “In today’s download world, I think it has been one of the delightful things. This camp has no video games. Everything is the traditional thing of the camp: it’s scavenger hunts, it’s singalongs.”

In addition to being an historic site, Olsen wants neighbors to think of Woodlawn as a place to take a walk, learn about its architecture, or see a wide variety of trees.

Famed architectural firm McKim Mead and White designed some of the more than 1,300 private mausoleums. The works of sculptors like Gertrude Vanderbilt Whitney — founder of New York City’s Whitney Museum — also are located on the grounds.

“It’s a terrific experience, and I know that they will all remember having had camp in a cemetery,” Olsen said of its young participants. “So, when they are older and in college, ‘Yeah. I went to camp in a cemetery.’ They will have a nice conversation item for the rest of their lives.”