BUSINESS DISTRICT IS EMPTY NO MORE 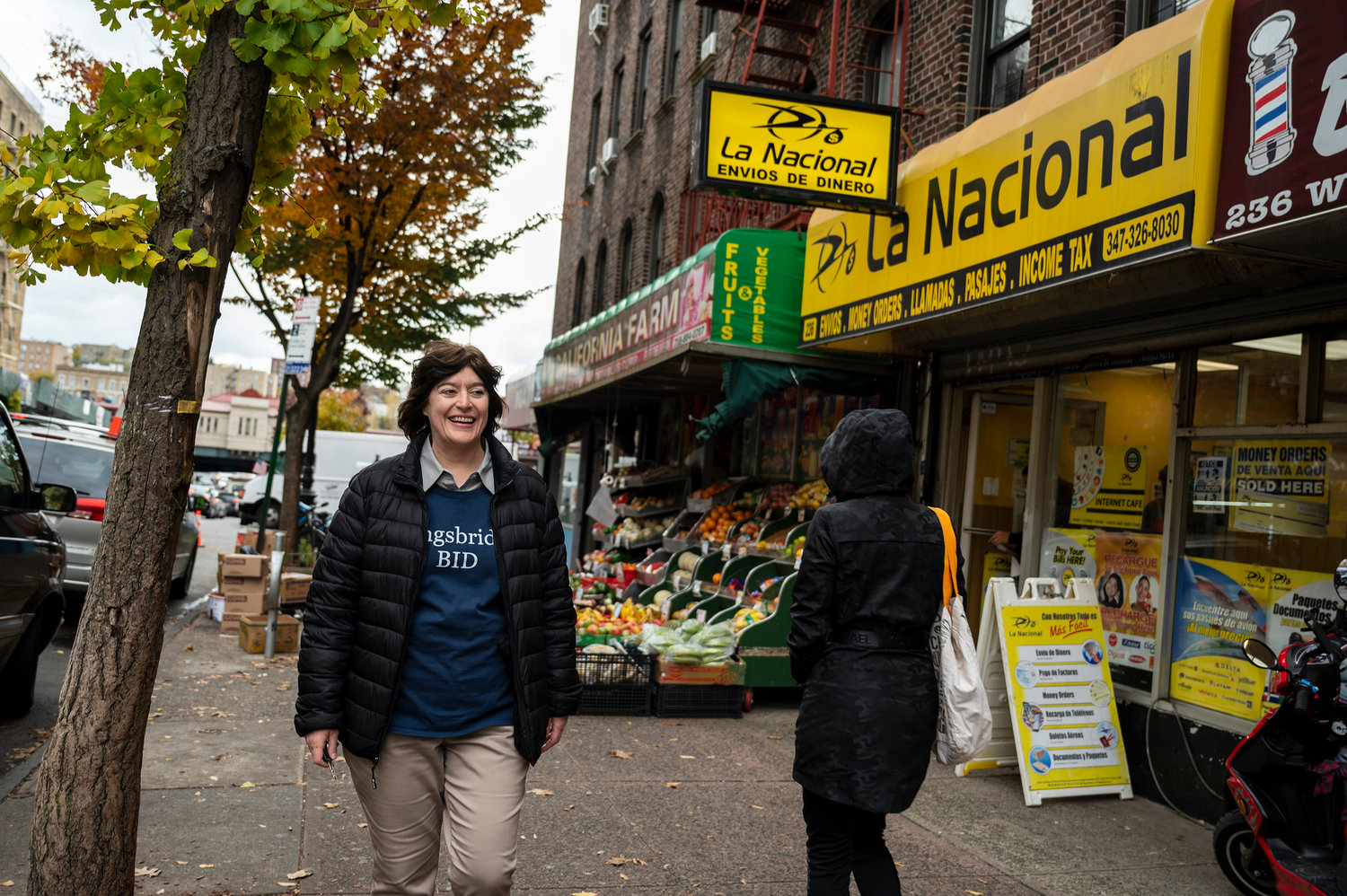 Jennifer Sproull, the assistant manager at the Kingsbridge Business Improvement District, says she often walks around the neighborhood to see what businesses are opening and closing. The BID has reached its lowest vacancy rate in a decade thanks to so many new businesses opening in the past year.
HIRAM ALEJANDRO DURÃN 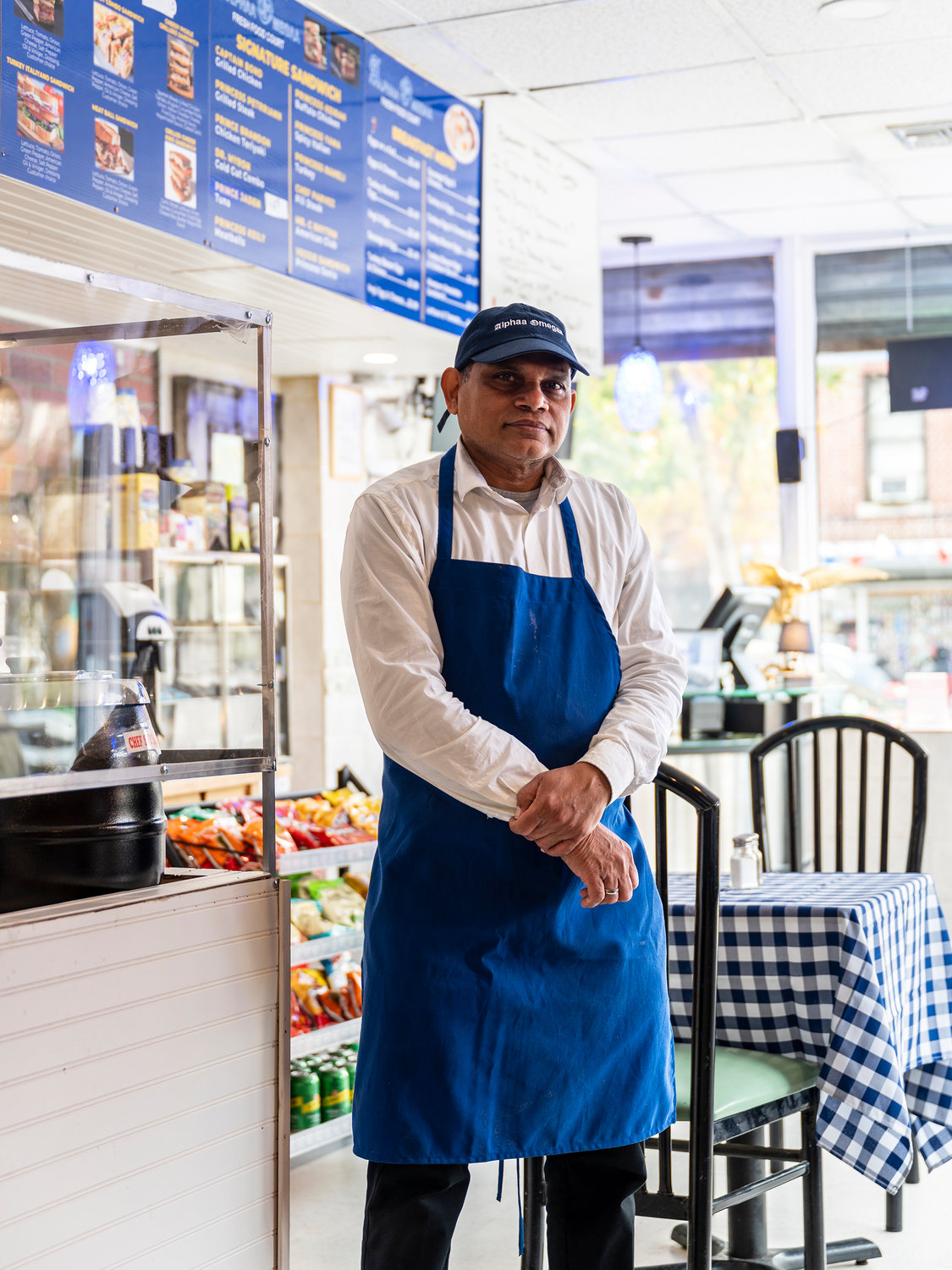 Peter De Bond opened his food court, Alphaa Omegaa, earlier this month on the corner of Kingsbridge Avenue and West 231st Street — where Kingsbridge Donut Shop once was. De Bond has opened one of several new businesses inside the Kingsbridge Business Improvement District, where officials say vacancy is at its lowest level in a decade.
HIRAM ALEJANDRO DURÁN 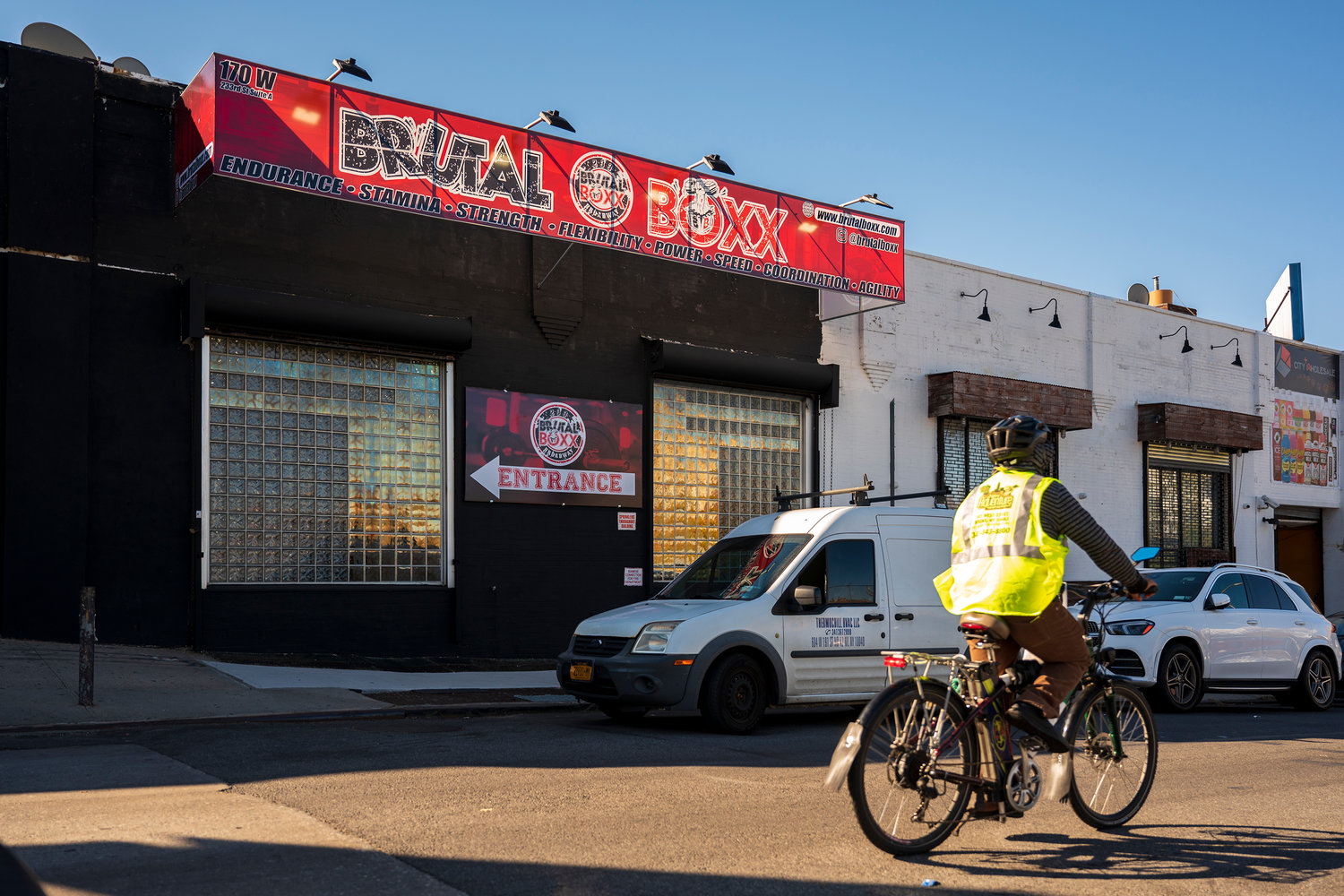 Brutal Boxx 2 filled a vacant storefront when it opened last year on West 233rd Street, says Jennifer Sproull of the Kingsbridge Business Improvement District. The boxing studio is one of several businesses to fill vacancies in the BID over the past year, bringing its occupancy rate to a 10-year high.
HIRAM ALEJANDRO DURÃN
Previous Next

The ever-growing number of empty storefronts is an issue New York City has struggled with for years. And the months-long shutdowns that came with the coronavirus pandemic last year certainly didn’t help.

The Bronx was devastated by the pandemic, both in terms of the virus’ physical toll as well as the severe economic losses. In fact, the Bronx was hit harder than anywhere else, at least according to a report from state comptroller Thomas DiNapoli this past June.

With 1-in-4 people unemployed at the height of the pandemic, it seemed the Bronx may never recover. Yet it’s happening — even if it’s not as fast as the rest of the city and the state.

Much closer to home, things are looking up economically. At least as far as inside the Kingsbridge Business Improvement District, anyway. In an area that spans Broadway in the general area of West 231st Street, it’s become harder and harder to find storefront space to rent. And for BID assistant manager Jennifer Sproull, there couldn’t be better news.

“As we started pulling out of the 2020 pandemic into the vaccine (phase of the) pandemic. It was like, ‘Oh my gosh, all these places are filling up,’” Sproull said. “And the vacancy rates are going down.”

In fact, vacancy has dropped to 7 percent inside the BID, Sproull said — way down from the 15 percent vacancy experienced during the worst days of the pandemic, and actually the best numbers this business district has produced since 2011.

“We’ve been one of the BIDs always with a low vacancy rate, but now we’re at a tremendously low rate,” Sproull said. “We probably haven’t seen this rate around here for maybe 10 years.”

There are several reasons why this is happening. First, many of the area’s large retail spaces — like the old Capital One Bank on West 231st bordering the Major Deegan Expressway that sat vacant for years — are finally filling up. The bank building has undergone a complete renovation, and will soon house not only a laundromat and UPS Store, but also is expected to become the new home for Community Board 8.

“That thing was empty and it was so big,” Sproull said.

“It was this beautiful old big bank. And that was a good one (to fill) because it had been sitting on the (vacancy) list for years. And I was like, ‘Good! Get it off!’”

Another old bank is under renovation on the other side of Broadway property owner Eric Chen hopes to turn into medical or professional office spaces in a building his company has owned for nearly three decades.

“It was retail before,” Chen said. “So, we see a better opportunity with the office buildings.”

There are also new anchor stores — big box stores that help attract smaller businesses — coming into the area, Sproull said, filling empty storefronts in places plagued by vacancies like the Broadway Plaza Mall. For instance, the electronics retailer Best Buy opened in the mall this past summer.

“We were losing people left and right out of that mall,” Sproull said. “Then we got Best Buy. Yay! We got a huge anchor down in the mall, because Forever 21 had left and this other one had left.”

There are also several small businesses filling up the Broadway corridor between West 231st and West 233rd streets, Sproull said. These include Alphaa Omegaa — a food court where Kingsbridge Donut Shop once was — and closer to the Major Deegan, the city’s newest Chipotle is almost ready to open its doors.

Peter De Bond, who owns Alphaa Omegaa, says he’d been looking to start a business in Kingsbridge for a while. He saw the perfect opportunity when the doughnut shop shuttered after 30 years.

“I called and I negotiated with the landlord, and I said, ‘Hey, I want to do something for the neighborhood,”” De Bond said. “And that’s how I came into it. They gave me a price that I really liked. I had to do a little bit of renovation and still a little bit of work is going on. But everything’s good now.”

Some questioned De Bond on why he took the risk of opening his first business venture in the middle of a global pandemic.

“There was a lot of fear that was placed like, ‘Why do you even want to start on this?’” De Bond said. “So, I said, ‘Hey man, whatever things are happening, people need to eat.’”

Alphaa Omegaa serves a variety of food like sandwiches, self-made salads and smoothies.

Just down the block, another eatery has finally opened — Joe’s Brick Oven Pizza. Unlike Alphaa Omegaa, Joe’s had planned to open before the pandemic, leasing the space in late 2019. But owner Joe Kandic said the opening was delayed when the coronavirus hit. On top of that, he struggled to get the eatery’s gas line established with Con Edison, delaying his opening several months more.

But now that Joe’s is finally opened, it’s another filled storefront, Sproull said. Feeling he could offer something different to Kingsbridge with a brick oven pizza place, Kandic says he saw a good opportunity to open despite other popular pizza places on either side of him along West 231st.

“I came over here a few times and I see there’s nothing like what I have,” Kandic said. “There are pizzerias, but nothing like this one. So, I said, ‘Let me just come here and put a nice brick oven pizza (place). Change a little bit the neighborhood. Make it better for the neighborhood.’”

While seeing vacancy drop because storefronts are filling up is a positive overall, Sproull remains a little worried there may ultimately be too many of certain kinds of businesses, and not enough of others. There appears to be a glut of discount stores, barber shops and big box stores — like Staples and AutoZone — that are outweighing the number of independent businesses.

“It’s like I have mixed feelings,” Sproull said. “You like them filled and you don’t mind having some of these chains and franchises to make it keep flowing. It’s a balancing act for sure.”