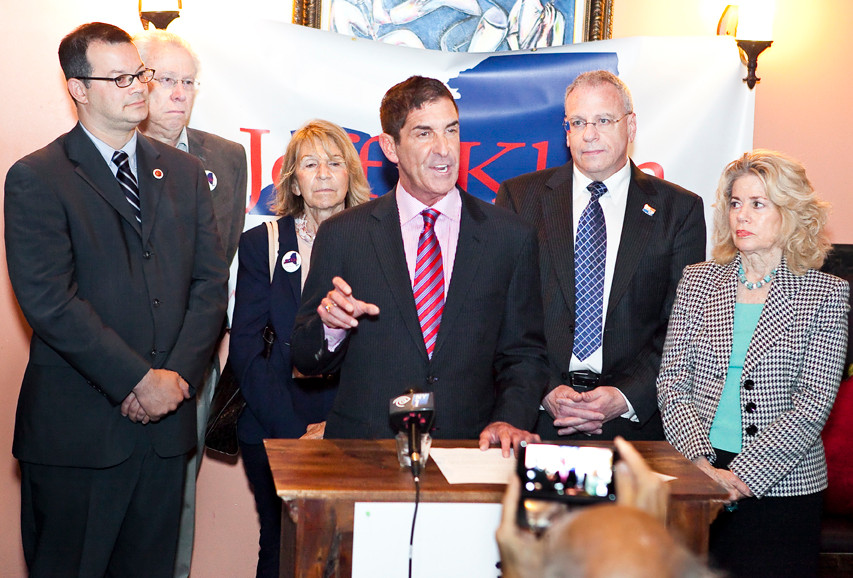 The endorsement provides a major boost to Mr. Klein, who is seeking to solidify support in Riverdale amid a Democratic primary challenge from the neighborhood’s former councilman, Oliver Koppell.

“Being supported by people who I’ve worked with, people who I respect, people who are on the same page as I am as far as doing the best for the community is very gratifying,” Mr. Klein said at a press conference inside the Tin Marin restaurant on Riverdale Avenue.

June Eisland — a development consultant who represented Riverdale on the city council prior to Mr. Koppell’s 12-year run on the body — spoke in support of Mr. Klein after endorsing him last month.

Mr. Dinowitz cited a range of initiatives he has worked on with Mr. Klein since the senator’s district expanded to include all of Riverdale and other parts of the northwest Bronx in 2012. The assemblyman placed extra emphasis on the legislators’ joint effort to prevent Montefiore Medical Center from building a widely unpopular new facility just off of Riverdale Avenue.

“I think it would be dishonorable for me, after asking our senator to do a list of things for our community — to work with us, to fight with us — to then repay him by not supporting him,” Mr. Dinowitz said.

Mr. Cohen said Mr. Klein has been “a tremendous partner” since Mr. Cohen succeeded Mr. Koppell on the city council at the start of the year.

“It’s not a personal decision,” Mr. Cohen said after the press conference. “I have to do what’s in the best interest of my constituents.”

But in a phone call, Mr. Koppell said Mr. Cohen and Mr. Dinowitz had disappointed him. Mr. Koppell recalled helping Mr. Dinowitz clinch the 81st assembly district seat in the early 1990s and being one of Mr. Cohen’s earliest supporters.

“I would have thought that [Mr. Cohen] would have a stronger backbone and adhere to the principles that I thought he believed in,” said Mr. Koppell, who added he now has “some regret” about helping Mr. Cohen win election.

“The man is a complete hypocrite,” Mr. Koppell said of Mr. Klein, “and people who support him are going along with this kind of political hypocrisy and betrayal.”

“What neither Dinowitz nor Cohen realize is they have lost whether Oliver wins or loses. Oliver is running to beat a Republican in Democratic clothing and if he wins great and if [he] loses then he has done the right thing,” Ms. Koppell stated. “Do Dinowitz or Cohen ever recover from this? Does anyone ever trust them again?”

The townhouse you've been waiting your whole life for