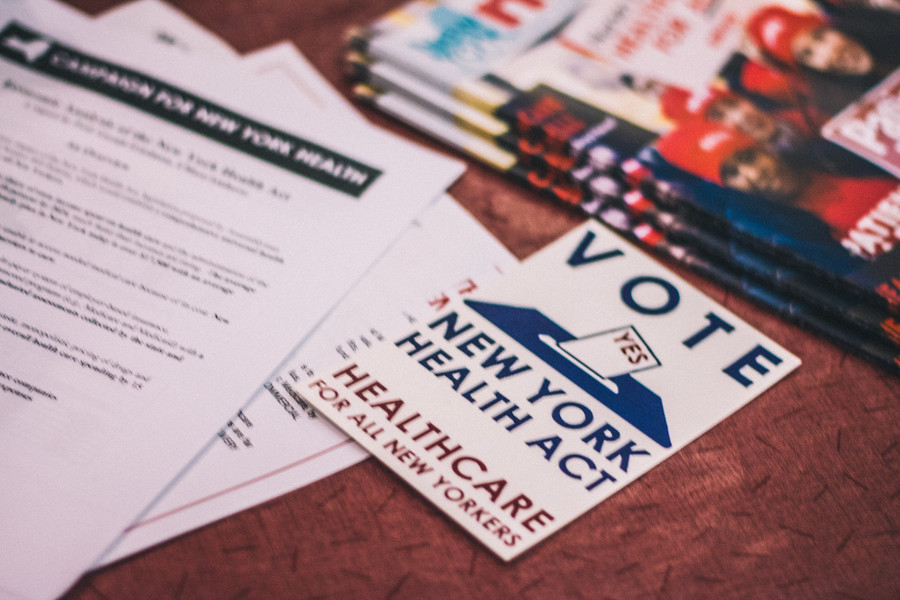 An information session at the Riverdale Temple shared details about a single-payer health care system. The session, organized by the advocacy group Northwest Bronx Indivisible, is part of a grassroots effort to build support for the New York Health Act, which the group hopes to have included as part of Gov. Andrew Cuomo’s 2018 agenda.
Aaron Mayorga
By Lisa Herndon

Louise and Ben Warren are enjoying their retirement in Van Cortlandt Village, depending on supplementary insurance from Medicare and Medicaid.

Louise counts herself as lucky because she can afford to pay the premiums. But for many of her neighbors, that’s not the case.

“This country is as primitive as it gets” when it comes to health care, Warren said. “When I was working and Ben was working, the taxes we paid for New York State alone was breathtaking. So, if you are going to pay taxes, you should get something for it.”

Warren was one of more than two dozen people who attended an informational session last week at the Riverdale Temple organized by Northwest Bronx Indivisible, an advocacy group made up of Riverdalians opposed to President Trump’s agenda.

The group is building grassroots support for the health act — which would essentially establish a single-payer health care system similar to Canada and several European countries — if only it can get through the state senate and to Gov. Andrew Cuomo’s desk.

The Assembly has been supportive of the bill, only to watch it stall in the senate. The blame for that failure, at least according to those speaking out, falls at the feet of Sen. Jeffrey Klein.

Members like Barbara Estrin and Helen Krim brought in speakers to address a small audience about the bill. Sunday’s meeting was part of a series of efforts members will make throughout the remainder of the year.

The New York Health Act is designed to provide universal, comprehensive health coverage to all residents, allowing them to choose their doctors and hospitals through a government-run program.

Employers would fund 80 percent of the cost, and a graduated tax based on an individual’s salaried and non-salaried income would determine his or her contribution.

For example, if someone earned $50,000 annually, they would pay a 6 percent contribution equivalent of $3,000, or $115 per typical paycheck. Employers, however, would cover 80 percent of the cost, meaning an employee would pay just $23 per paycheck in that scenario.

Savings would come from a simplified financing system, while insurance premiums, co-pays, high deductibles, and both out-of-network and administrative costs would be replaced with taxes. Additionally, residents would save money because the state could negotiate pricing on prescription drugs and medical devices instead of insurance companies making those deals.

The anticipated $26 billion in savings would fund not only fair compensating for service providers, according to supporters, but it also would allow potentially displaced workers to be retrained into other careers.

“What we have is broken,” Krim said. “It’s not working. It’s not working for too many people. And the waste, the money that is spent that has nothing to do with health care.”

The health act has passed the Assembly several times, but stumbled in the senate.

Indivisible members met with Klein this past April, Estrin said, and the senator promised he would speak with both senate leaders and Cuomo about the bill. Klein, she added, “never kept any of those promises.” Klein, however, maintains he has had conversations with senate leaders.

Although Klein has publicly supports the health act since April — and members of Klein’s Independent Democratic Conference signed on as some of the bill’s sponsors — the senator could still do more to help, Estrin said.

“Klein does support it, but it’s locked in a health committee chaired by Kemp Hannon,” she said. Klein “never brought it up for a vote. It was never debated. (Klein) promised a hearing but it never took place. It was killed by the Republicans.”

That has been a sour note for some voters in recent years, since Klein’s IDC has formed a political coalition with Republicans in the senate, allowing them to maintain majority control.

“I’m still committed to holding a hearing on the New York Health Act, and I look forward to getting it done this upcoming session,” Klein said in a statement.

A prescription for a successful plan?

“As nurses, we see every day the incredible dysfunction of the health care system that we have,” said Judy Sheridan-Gonzalez, a registered nurse and president of the New York State Nurses Association, who spoke at Sunday’s event. “While the Affordable Care Act has made some improvements, it hasn’t got rid of the big problem, which is insurance companies having hegemony over the way health care decisions are made, and the way health care is paid.”

If signed into law, the health act would employ a community advocacy component, assisting in the health decision-making process with patients and doctors.

Transforming the bill into law is simply a matter of ethics, Sheridan-Gonzalez said.

“The question is, do Americans believe everyone has the right to health care?” she asked.

Leonard Rodberg, a research director at Physicians for a National Health Program, said there shouldn’t be financial barriers to getting health care. He advocates making medical care free of cost at the point of service, financed through a fair tax system.

“People want choice of doctor and hospital,” Rodberg said. “People don’t care if you have multiple payers. They care to have the bill paid. And the problem people have today is that payers don’t pay the bills.”

For Indivisible members like Estrin and Krim, it means continuing to spread the word about the health act to win more supporters before the year’s end.

CLARIFICATION: Sen. Jeffrey Klein says he has contacted senate leaders about the state health care plan. A story in the Sept. 21 edition didn't make that clear.

CORRECTION: The typical per-paycheck medical cost under a proposed state health care plan on a $50,000 salary is $23. Cost savings for medical coverage would come from a streamlined finance system. A story in the Sept. 21 edition stated differently.