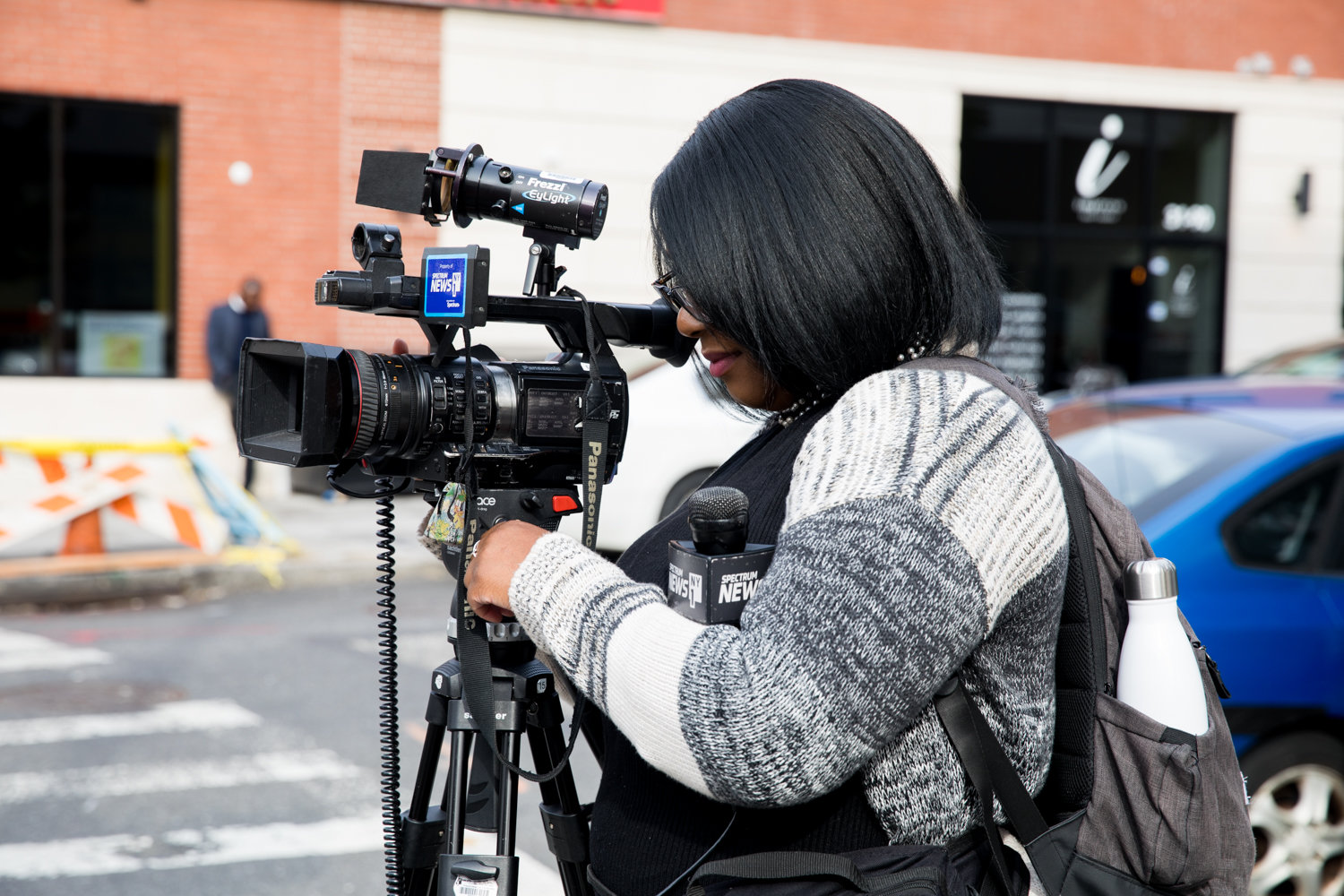 Two state lawmakers have introduced a bill they say would require cable companies to produce local news, similar to how the cable provider Charter Communications operates Spectrum News. Part of the inspiration for the bill was Verizon’s announcement it would shutter its FiOS1 local news operation.
JULIUS CONSTANTINE MOTAL 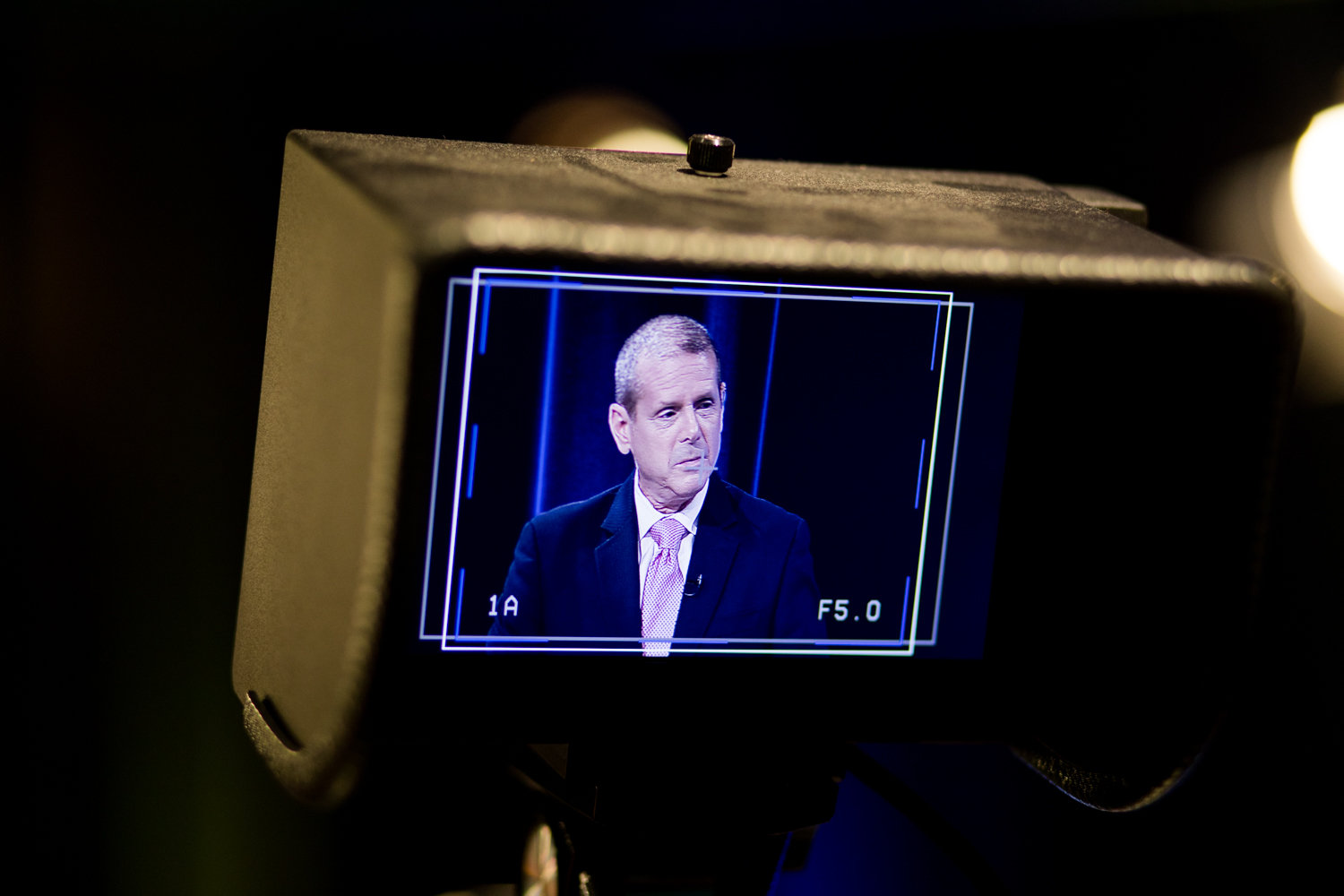 Longtime public access host Gary Axelbank is seen through the viewfinder of a television camera during a debate he moderated last year. Although what Axelbank’s BronxNet cable access channels do is different, fundamentally it’s not far off from the local televised news two state lawmakers — state Sen. Kevin Thomas and Assemblyman Thomas Abinanti — want to require of cable companies in order to continue servicing customers in the state.
JULIUS CONSTANTINE MOTAL / File 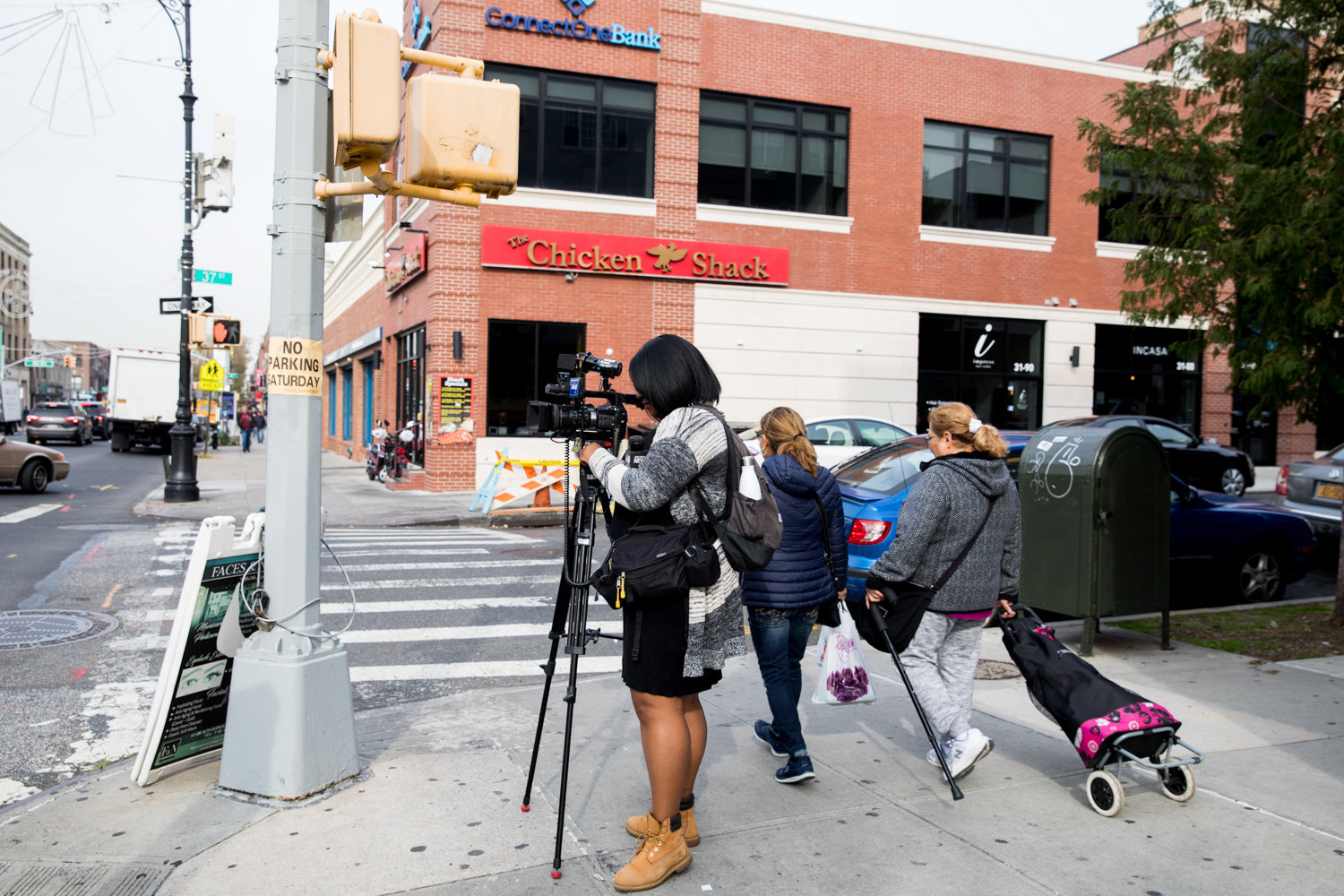 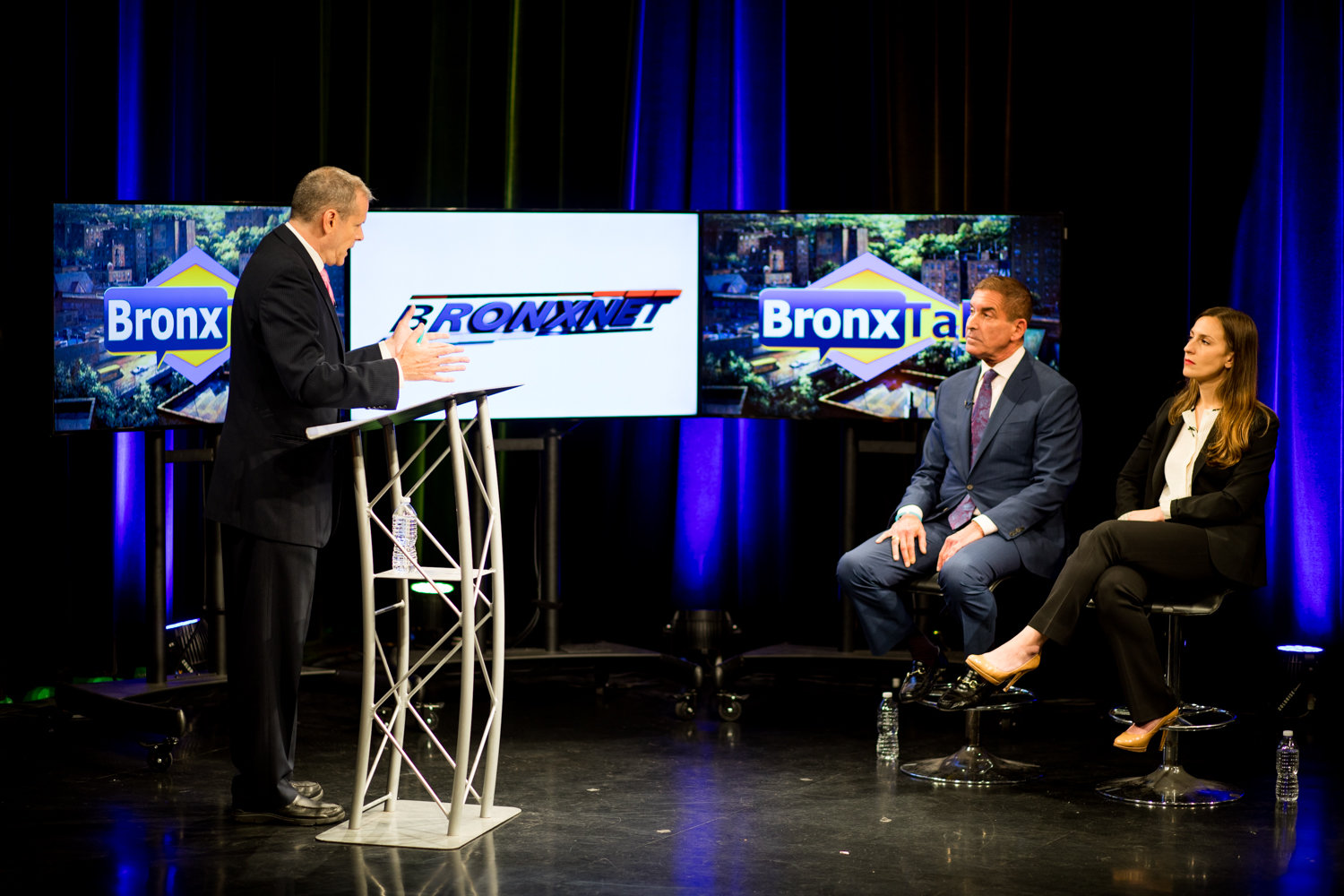 Local news is in peril. From rampant job cuts to dwindling budgets, communities across the country are suffering from a dearth of outlets providing crucial coverage creating what’s being called “news deserts.”

The latest blow is Verizon’s shuttering of its local FiOS1 news operation Nov. 16 — and that’s enough to move a pair of state lawmakers to do something about it.

A new bill proposed by Long Island state Sen. Kevin Thomas and Westchester County Assemblyman Thomas Abinanti could require cable providers to carry local independent news. That’s because access to such news, in their view, is vital to the public health and safety of communities.

“We need an informed constituency,” Thomas said. “That’s the best way to have a healthy democracy.”

Verizon might be looking to get a jump on any such legislation, announcing last week it will partner with Altice to carry News12 stations on FiOS rather than dropping local news completely. It’s not clear how such a move would affect the Thomas-Abinanti bill.

Working to keep the Bronx covered

Community media, like small newspapers and local television stations, provide information to members of small communities that may have been overlooked by larger network-affiliated stations — even those covering a similar area.

“What we have now is insufficient, especially in the suburbs,” Thomas said. “The city is saturated with all sorts of news media. Here on Long Island, there’s a desert. So is upstate. So is Westchester.”

While the city may have a wide variety of coverage, from borough-wide News12 to The New York Times, to small papers like the Brooklyn Daily Eagle, and, yes, even The Riverdale Press, small neighborhoods are still under-covered, said longtime BronxNet host Gary Axelbank — even right here at home.

“There is still not enough local coverage of the Bronx,” he said. “That’s why I founded ThisIsTheBronx. You’ve got 1.4 million people in the Bronx. You have 600,000 people in Boston. Less than half. But they’ve got The Boston Globe, they’ve got daily papers, they’ve got network TV shows.”

The more than 60 neighborhoods of the Bronx are covered, at least in the television sense, by News12 The Bronx — available to Altice USA subscribers — and Charter’s Spectrum News, available to Spectrum subscribers.

Thomas would like to see more independent, local news like BronxNet covering hyperlocal news on television. BronxNet, a public information channel, is carried locally on Verizon and Optimum, and also available online. The network is funded by the borough president’s office and the city’s cultural affairs office.

Losing FiOS1 particularly hit Thomas hard, because to him, it provided much-needed coverage of his district. Its closing is hardly unique in the broader media landscape, but the fallout for communities that relied on it is still very real.

In the city, local news outlets have been rapidly changing hands or closing altogether. In early October, Newsday Media Group sold the free daily newspaper amNewYork to Schneps Media, which purchased outlets like the Bronx Times last year. That acquisition ultimately laid off most of amNewYork’s news staff.

Last year, one of the city’s most well-known alternative weeklies, The Village Voice, was closed three years after it was purchased by Peter Barbey, who’s a member of one of the wealthiest families in the country. The New York Daily News and the New York Post have both experienced colossal layoffs in recent years, mostly affecting coverage of the outer boroughs like the Bronx, while some operations that tried to maintain hyperlocal coverage like Gothamist and DNAinfo were shuttered or rescued by other outlets.

Although he’s not exactly a day-to-day journalist himself, Axelbank says he’s covered “a million” local stories that otherwise would be overlooked by the larger outlets not able to provide such a hyperlocal focus.

“I moderate all the political debates in the Bronx,” he said. “I’m not the only one who ever moderated a debate, but I think it’s understood that there’s a place for higher profile debates on BronxNet.”

He has chatted with U.S. Rep. Elliot Engel, who spoke candidly about the Democratic Party impeachment inquiry, and the administration’s plans for Syria, he said. Last month, he brought on guests to discuss potential changes to the energy grid in Hunts Point. Axelbank has covered everything from new city council representatives and solar panels to a re-imagined production of “West Side Story.”

Axelbank is filling a void in the borough that would otherwise remain empty because there aren’t enough newspapers or even television outlets to present it, and it’s the kind of void Thomas and Abinanti say they are rushing to fill.

“I need constituents who can get information, find out about local events, and find out about things that are happening in the community,” Thomas said.

The state senator believes television news has a larger audience than print, which is why his bill focuses exclusively on cable news.

“We have a lot of print media out here,” he said, referring primarily to Long Island where his district is. “You get a larger audience over the TV. That was my thinking.”

Paying for this local news coverage would be the responsibility of each cable company, as it’s been in the past. Nothing in the proposed bill would earmark state money toward any television news outlet.

“It’s up to the companies, but they shouldn’t always be looking at ‘How could this make money?’” Thomas said. “We should reach out to the community, and look out for the community.”

Last year, New Jersey governor Phil Murphy allocated $1 million to the state’s Civic Information Consortium, which funds local news. That could ultimately be a model for Thomas and Abinanti’s approach.

“I will look in to some of that and see exactly how it would work,” Thomas said, adding that at this point, there are no plans to modify his bill that way.

While Thomas says he understands concerns that news stations that are mandatory by law could be politically biased, the government would have no say in the content of those broadcasts.

“The government isn’t telling them what to cover,” the senator said. “They’re just saying, ‘Please provide another local news channel.’ We’re not saying you have to cover politics, have to cover events. Just cover news. Whatever is going on, they should be reporting on.”

Axelbank wasn’t concerned those local news stations would be any more biased than existing cable stations.

“You think CNN and Fox News are not influenced by politics?” he asked. “They are.”

There is, however, more work to be done as the bill is still in committee, and it must pass through several stages before it hits the governor’s desk — if it hits it at all.

Ultimately, Axelbank hopes the bill makes it to Gov. Andrew Cuomo’s desk because he believes it would help strengthen local coverage to communities in the Bronx that don’t have the benefit of a local newspaper or television coverage.

“If you, as a host and interviewer, perform responsibly and intelligently, and you do your research, and you do it respectfully,” he said, “then you are doing the public a really good service.”