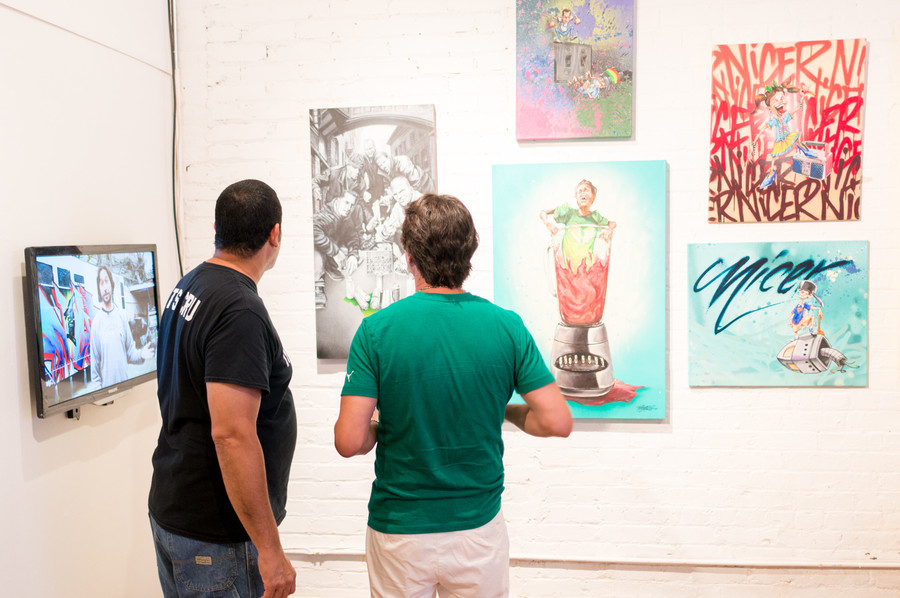 Wilfredo Feliciano, known as ‘Bio,’ left, and Hector Nazario, known as ‘Nicer’ from Tats Cru, look at some of their artwork at their exhibition in BronxArtSpace.
Julius Constantine Motal
If you go...

WHAT: Art of Tats Cru

When graffiti was seen as an artistic taboo in the 1980s, three Bronx artists changed the narrative.

Tats Cru, a group of graffiti artists from the South Bronx, celebrate 37 years of graffiti and murals with an exhibition of their collaborative and individual work at BronxArtSpace, 305 E. 140th St., through July 15.

The group formed in 1980 when Wilfredo “Bio” Feliciano, Hector “Nicer” Nazario and Sotero “BG183” Ortiz met in high school. The trio first followed other graffiti artists who used the subway as their canvas.

Although they never pursued a traditional arts education, their collective passion followed them out of the subway and onto the streets of the Bronx, and soon across the city. By 1994, they made their love of graffiti a business.

“When we started, we had no idea what we were doing,” Feliciano said during an artist talk with Lois Stavsky, founder of the Street Art NYC blog, on June 22. “We were the worst businessmen ever.”

Today, the group’s experience has taken them across the world to countries like England and China. They’ve also worked with famous rappers such as Fat Joe, Big Pun, and Nas on various projects.

A fraction of the memorial murals honoring loved ones along with portraits of characters created by the trio and more, were chosen out of hundreds of other pieces to line the walls at BronxArtSpace.

For curators Eileen Walsh and Laura James, the group’s story serves as an inspiration to all up-and-coming Bronx artists.

“They made their own way,” Walsh said. “And we really like to promote that because we would like to see all types of artists in the Bronx feel empowered to try and make it in the art world and not be afraid, because they don’t have everything that other people think you’re supposed to have.”

Walsh encourages Bronxites to visit the exhibit in order to learn about a vital part of the borough’s rich art history.

“It’s good to open up your mind to the whole Bronx,” she said. “This is something that bridges a lot of gaps.”

With offices still based in the borough and 37 years under its belt, the artists behind Tats Cru all agree their art making is still a learning process. And when it comes to their daily collaboration, they proudly admit how much they always fight.

To people who aspire to be artists, Feliciano said no one else’s voice matters as much as their own.

“You have to really believe in what you do,” he said. “You can’t let people discourage you.”