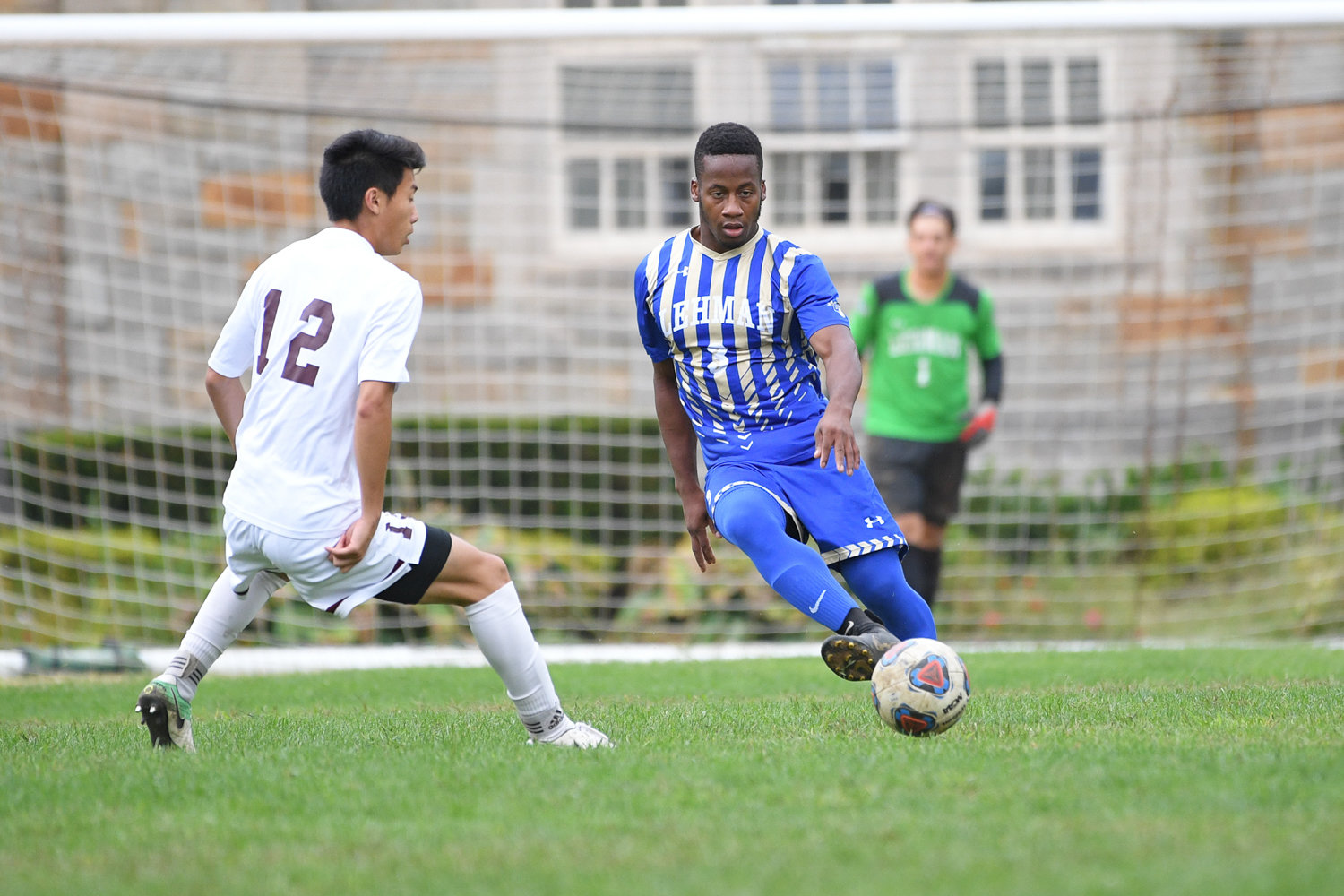 Lehman College defender Dominic Dixon scored the game’s only goal early in overtime as the Lightning won its third overtime game of the season with a 1-0 verdict over John Jay last Saturday.
Courtesy of Lehman College 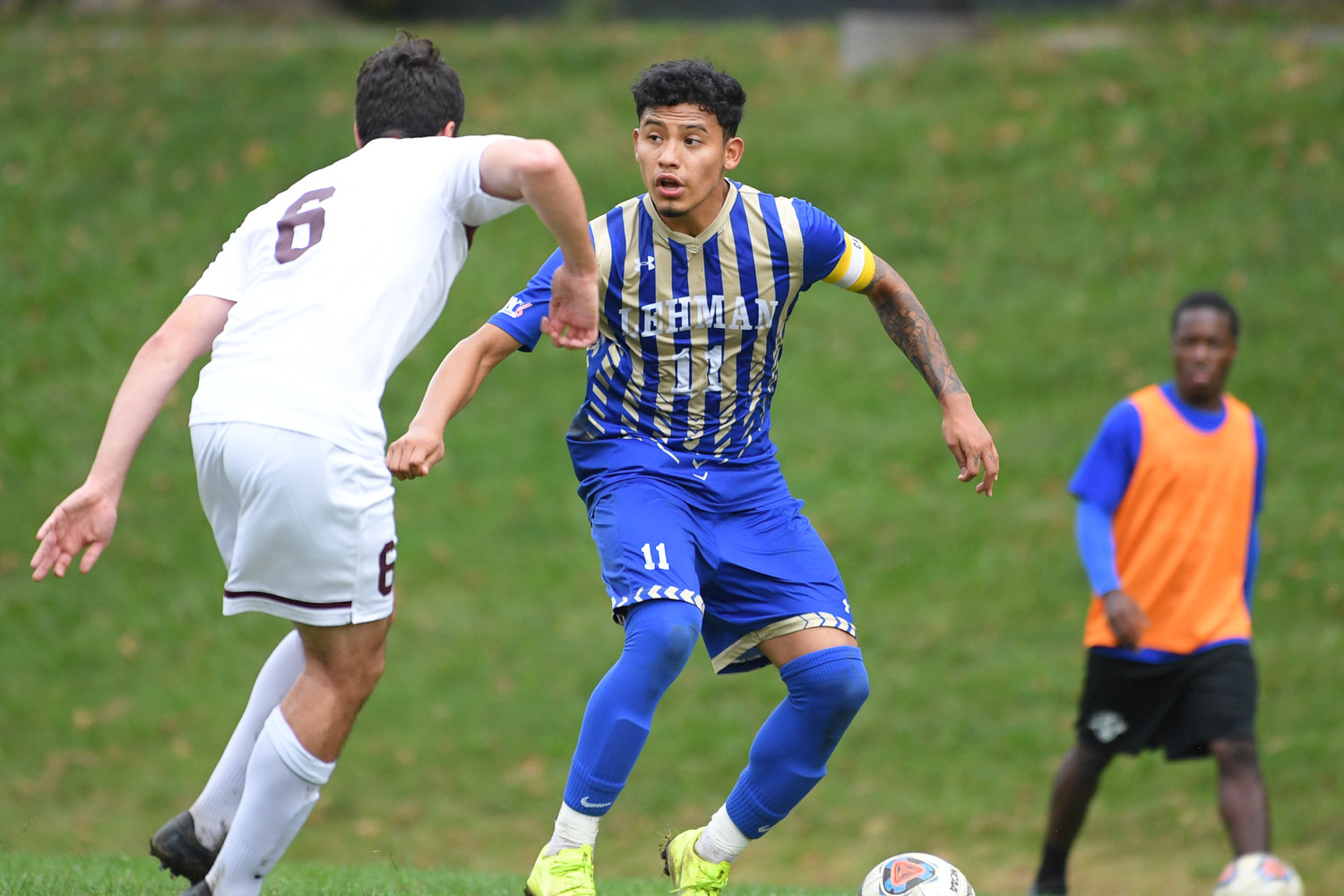 Lehman’s Eduardo Victorio tries to work around a John Jay defender in the Lightning’s 1-0 overtime victory over the Bloodhounds last Saturday.
Courtesy of Lehman College
Previous Next
By SEAN BRENNAN

Pick a sport, any sport, and you will rarely find a coach who is totally fulfilled and completely happy with his program.

Take Lehman College men’s soccer coach Toma Gojcevic, for instance. To hear him talk about the Lightning’s season, one would think it’s been mediocre at best.

“This season has been kind of crazy,” Gojcevic said. “It’s been an up-and-down season in a sense that we’ve won games but it hasn’t been easy.”

That’s called “coach-speak,” so allow us to interpret for you. In Lehman’s case, it translates into, “We’re in first place in the City University of New York Athletic Conference, have clinched a bye into the conference semifinals, will host that semifinal battle, and — with a victory in our final game on Oct. 30 at dreadful Medgar Evers — will claim the regular-season title and the top seed in the conference tournament slated for early November.”

“We started the season really well,” Gojcevic said. “We were 5-0 with 11 goals scored and one against. But I have a few freshmen and sophomores that have taken a bit of a tailspin, and maybe the game has caught up to them a little bit. But I’m happy where we are. We’re 10-4 (overall) and 5-1 (in CUNYAC) and leading the conference.”

The Lightning, who won the CUNYAC championship in both 2016 and 2017, have put themselves in a prime spot to make it three titles in four seasons after their 1-0 overtime victory over John Jay last Saturday. It was a nail-biter, for sure, and it was Lehman’s third overtime win of the season. But when Lightning defender Dominic Dixon found the back of the net four minutes into the extra session, Gojcevic and the Lightning reveled in clinching their playoff bye, leaving them one win away from claiming the regular-season title.

“It was a great feeling,” Gojcevic said. “It was a relief, because even though Medgar Evers is an important game, this win gives us some breathing room that if, God forbid, we lose to Medgar Evers, we still have secured second place. And a bye.”

So how did the Lightning, coming off a down year, once again ascend to the pinnacle of the CUNYAC?

“It has a lot to do with some of the members left over from the championship teams like Chris Muholland, Abdel Itito and Adewale Adewusi,” Gojcevic said. “Those three have taken over the leadership. But I tell everybody that while they have done a great job in leading the group, it’s my two goalkeepers — Demiraldo Grunasi and Adrian Magana-Santos — that are the best part of this team. They’ve both been great and they have five shutouts apiece.”

But it’s been a balancing act trying to assuage his two ace net-minders.

“They’re not happy with me because they both want to start,” Gojcevic said. “So one day I took them both aside and said to them, ‘Look, you’re both capable of starting, you are the reason why we’re here, and you are the best part of our team. So it doesn’t matter who starts. We just have to make sure that we get the results that are needed.’”

And those continued results, Gojcevic hopes, will lead the Lightning far beyond winning the CUNYAC regular-season crown and the postseason tournament.

“The goal is to win the conference, but the bigger goal is to win that first NCAA (tournament) game, which has been mine and my coaches’ goal for the past three or four years,” Gojcevic said. “We’ve gone to the dance twice, but now it’s time to get that first win.”

And despite having more veteran teams in 2016 and 2017, Gojcevic thinks this team has the goods to not only capture the CUNYAC crown, but also become the first CUNYAC team to win an NCAA tournament game.

“Are they more experienced than my previous championship teams? No. But I still have enough quality that we should be able to advance to the NCAAs, and try and get that first win.”

But first thing’s first: A win at Medgar Evers (1-12 overall, 0-6 in CUNYAC) followed by a successful sprint through the conference tournament. Then we can talk NCAAs and making a little history.

“My biggest fear is that we come flat against Medgar Evers on Wednesday and everything goes astray,” Gojcevic said.

That’s simply coach-speak again. What Gojcevic meant was “we got this one in the bag.”