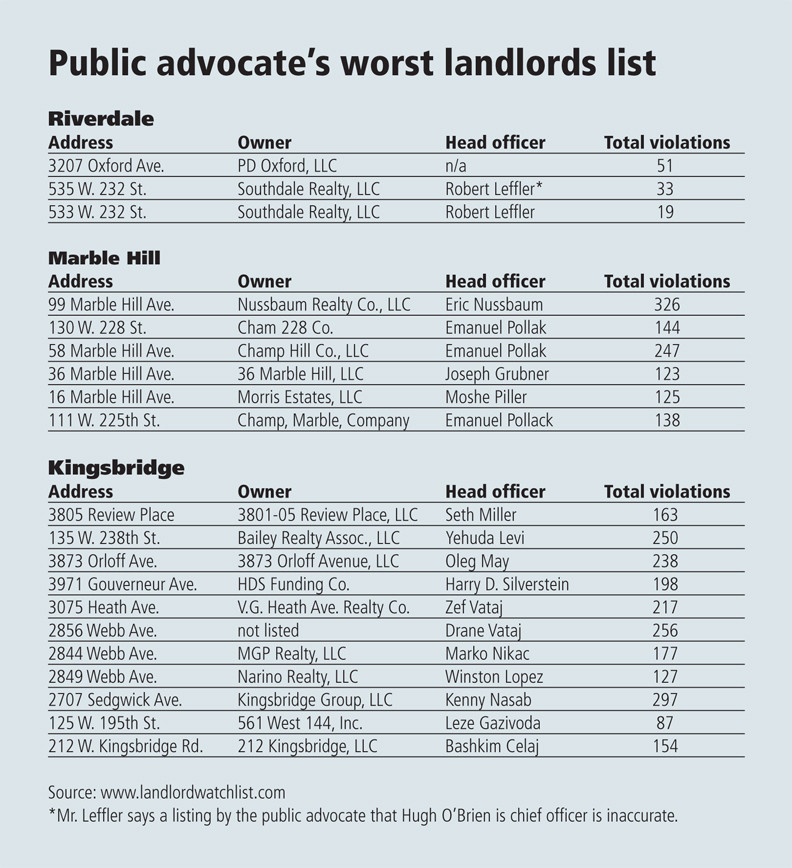 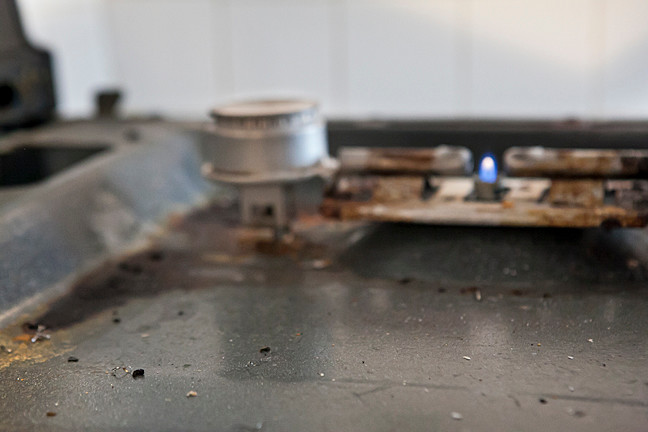 Rodents droppings on the stove of an apartment at 212 W. Kingsbridge Road on Nov. 7.
Marisol Díaz/The Riverdale Press 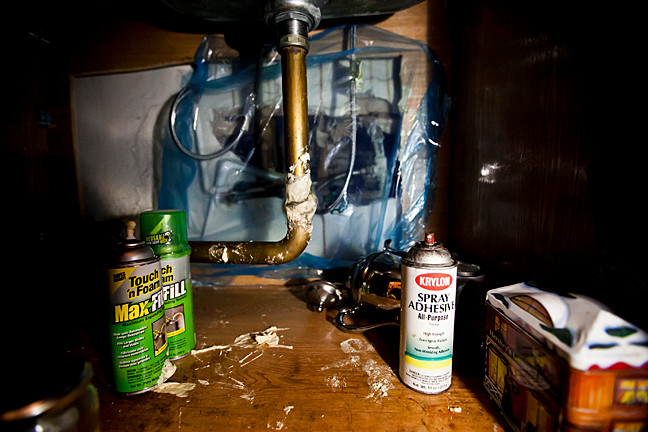 A hole under a kitchen sink at 99 Marble Hill. A resident at this apartment fears her landlord's failure to fix the hole in a timely fashion will lead to a rodent infestation
Marisol Díaz/The Riverdale Press
Previous Next
By Shant Shahrigian

Days without hot water, weeks with no working elevator and a large hole underneath the kitchen sink are among Kim Rijo’s problems at her 99 Marble Hill Ave. apartment. More than 300 such violations earned the building a spot on Public Advocate Letitia James’ 2014 “Worst Landlords Watchlist” along with 19 other properties inside Community Board (CB) 8’s boundaries.

Ms. Rijos said when workers recently came to repair a leak, they left a large hole in a wall without fixing it, making her worry that mice could infest her apartment. She also recounted a roughly six-week period in summer 2013 when the elevator did not function, forcing her to carry a child in a stroller up six flights of stairs.

“It is enough to aggravate you, but it’s not enough to make you move,” said Ms. Rijos, 32.

“I don’t have anywhere to go, at least for the moment,” she concluded.

Her building’s owner, Nussbaum Realty, LLC, did not answer phone and e-mail inquiries. Shortly after Ms. James on Oct. 8 released this year’s "Worst Landlords List," a judge gave an order for Nussbaum Realty, LLC to make repairs and pay a $5,000 fine.

Earlier this year, Councilman Ydanis Rodriguez worked with Department of Housing and Preservation (HPD) officials to put 99 Marble Hill Ave. in HPD's Alternative Enforcement Program. While HPD does not take over control of buildings in that program, it gives the department enhanced powers to get conditions repaired.

“The councilman is pleased these tenants will receive the repairs they deserve and will maintain our connection to the building to ensure continued maintenance,” Mr. Rodriguez's spokesman Lucas Acosta said in an e-mail.

Nussbaum Realty, LLC’s website does not list the number of properties it owns, but states it “has been managing residential and commercial properties in New York City since 1920.”

A longtime tenant at 99 Marble Hill Ave. showed sympathy for her landlord and her superintendent, who could not immediately be reached.

Speaking through a translator, Luz Hernandez, 82, said the superintendent has been quick to fix problems with electrical outlets and other parts of her apartment.