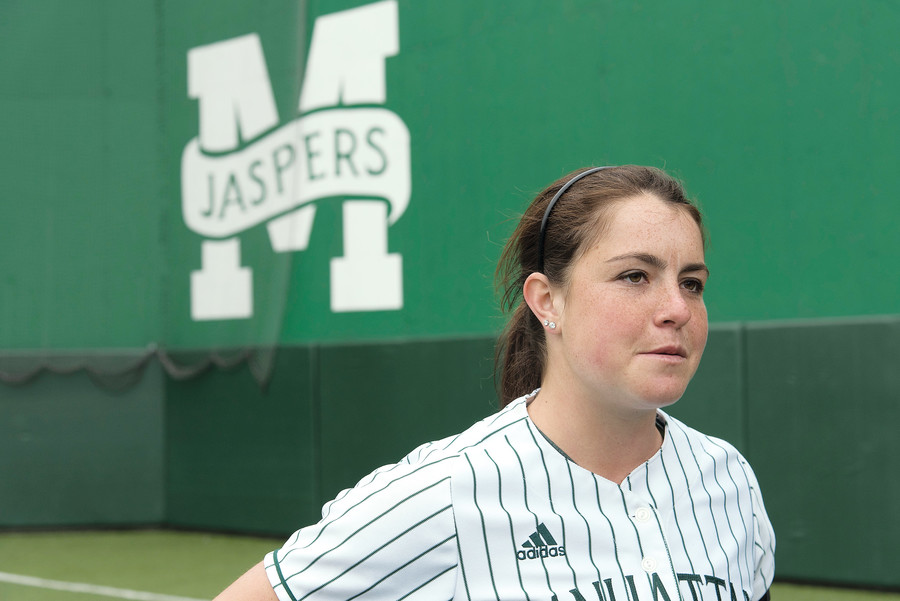 Elena Bowman, #55, the record breaking senior after an 8-0 win against Iona on May 5.
Photo by David 'Dee' Delgado
By Sean Brennan

Elena Bowman may have moved on from Manhattan College following her graduation this past May, but she may have one more accolade coming her way as she has been nominated for the prestigious 2016 NCAA Woman of the Year award.

The award honors graduating student-athletes who have excelled in the areas of academics, athletics and community service during their college careers.

“I’m grateful to my coaches, teammates, and the entire Athletic Department for the incredible experience I had here on and off the field,” said Bowman, one of the greatest softball players in Manhattan history. “It’s an honor to represent Manhattan College as this year’s candidate for the Woman of the Year Award. I’m humbled by the opportunity to do so.”

Bowman was a four-year player for the Jaspers softball team, and during her tenure in Riverdale she set numerous school records while also landing several Metro Atlantic Athletic Conference (MAAC) honors. Bowman was a three-time First Team All-MAAC selection and was named the conference’s unanimous Player of the Year following the 2015 season. She also finished her career as Manhattan’s all-time leader in games played (198), home runs (52, making her just the second player in MAAC history to surpass 50 homers in a career), walks (134) and slugging percentage (.723). Bowman finished third all-time in school history in hits (201), doubles (38) and runs scored (130).

Bowman’s off-the-field endeavors included being the Manhattan ambassador to the “Love Your Melon” campaign. The program, which was established in 2014, had the goal of providing beanies for all children battling cancer.

“I can’t think of a more deserving candidate than Elena,” Manhattan softball coach Tom Pardalis said. “Her on-field achievements speak for themselves, but she did just as well in the classroom and was active in the community. She exemplifies everything you want a student-athlete to be.”

The list of candidates for the award will eventually be whittled down to 30 (10 each from Division I, II and III) with the finalists being drawn from that list. The winner will be announced at the annual NCAA Woman of the Year ceremony on October 16.