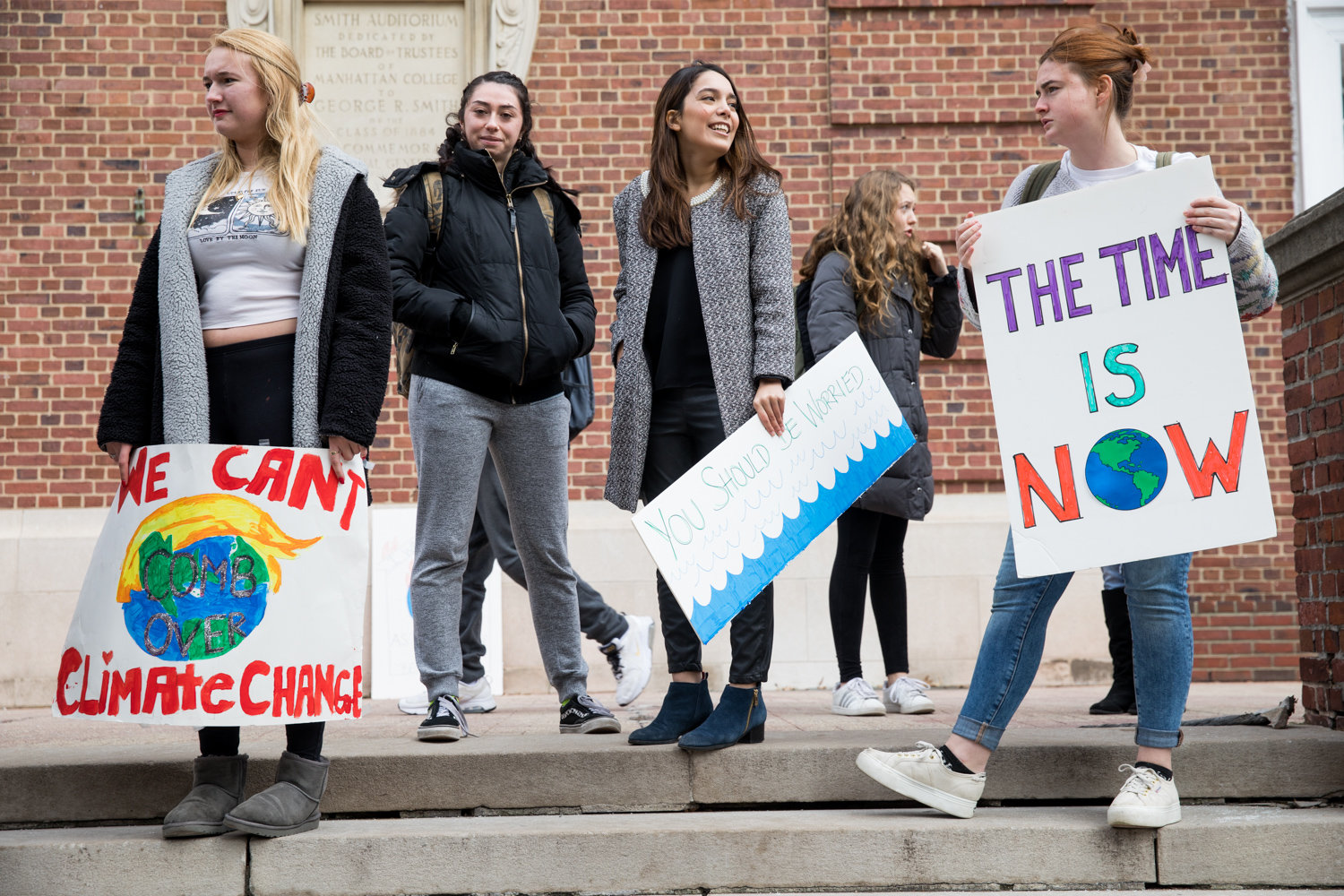 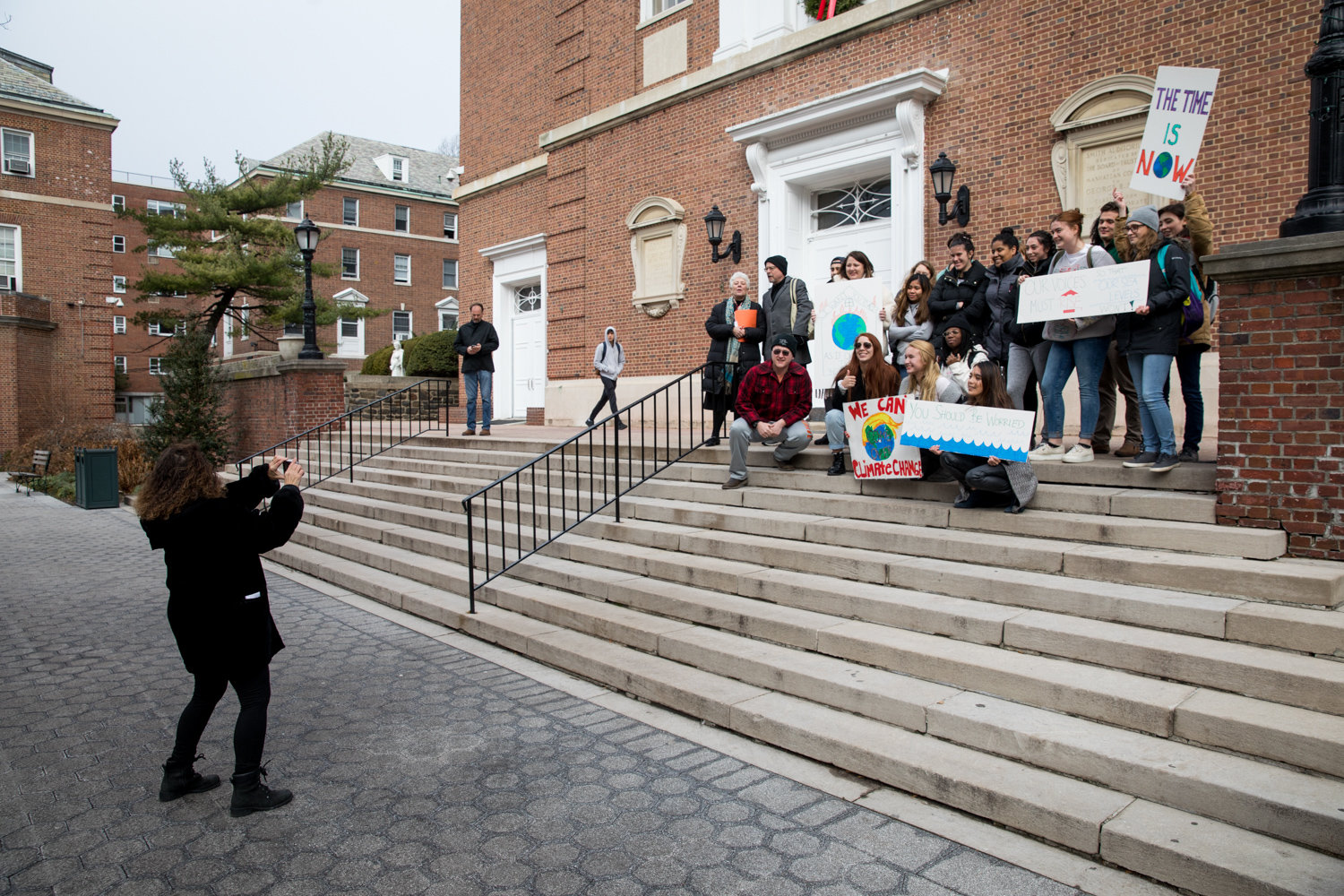 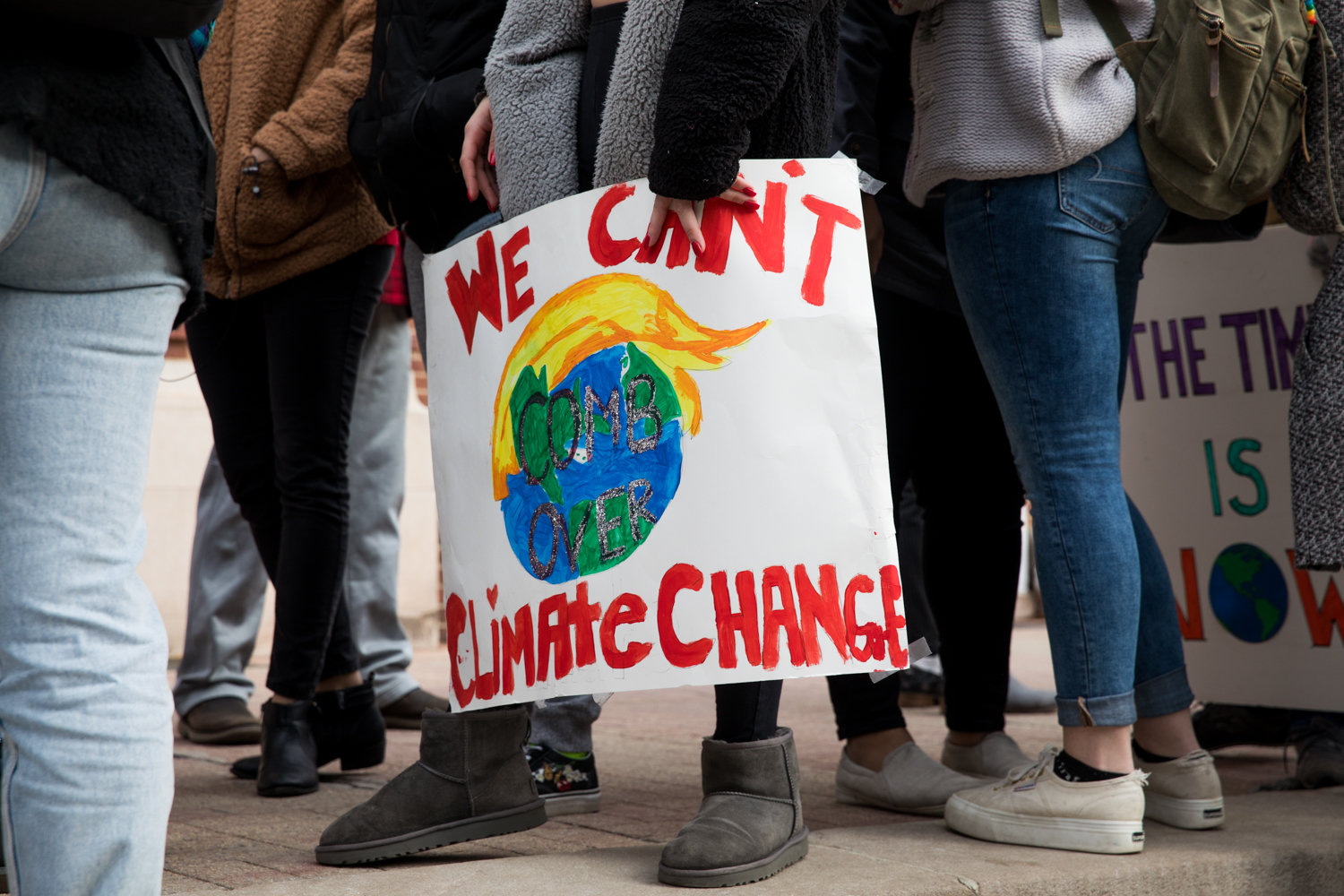 A Manhattan College student holds a sign reading ‘We can’t comb over climate change’ during an awareness campaign between classes.
JULIUS CONSTANTINE MOTAL 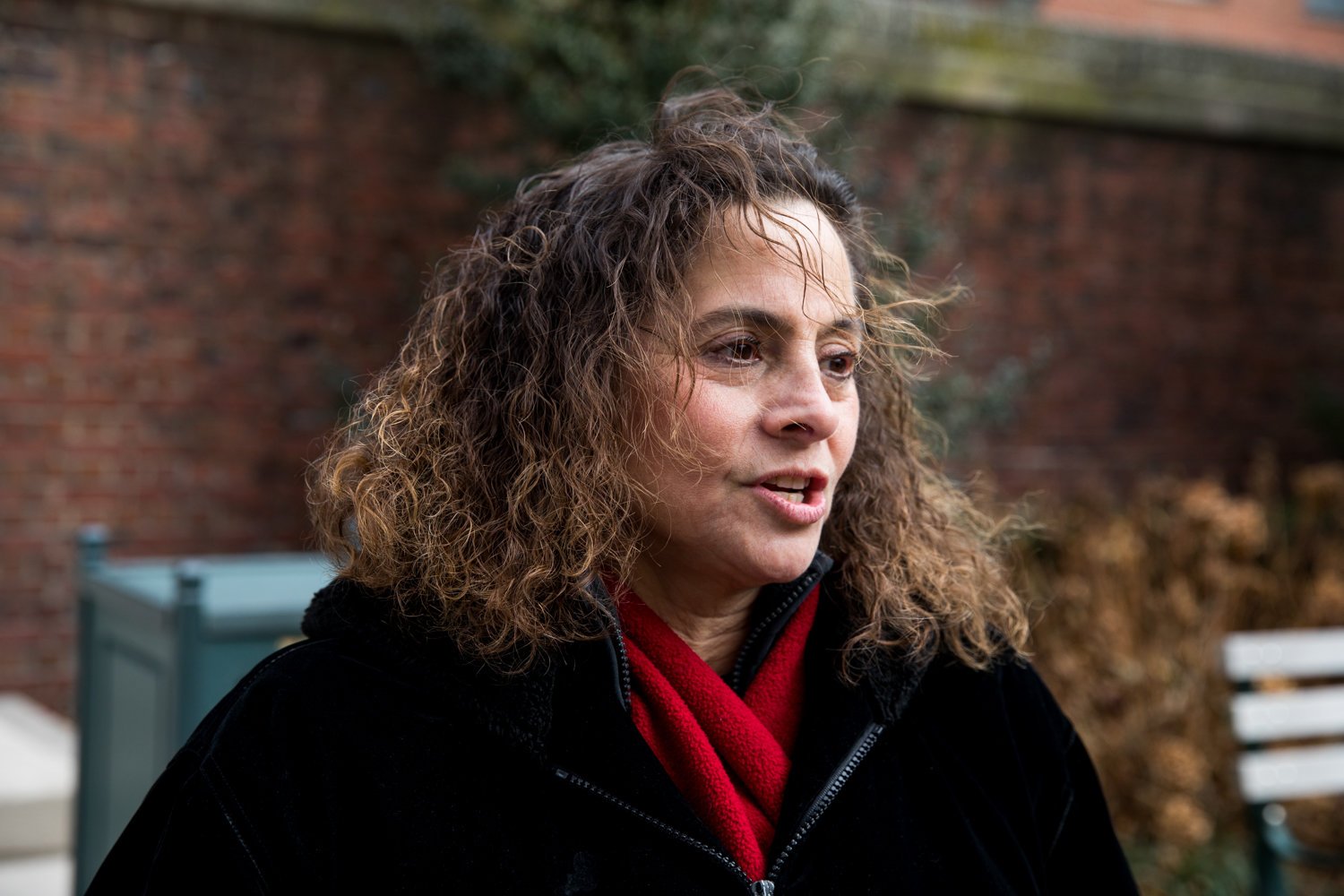 Manhattan College professor Pamela Chasek talks about her students’ efforts to raise awareness on campus about the effects of climate change.
JULIUS CONSTANTINE MOTAL
Previous Next
By RAPHAEL LASSAUZE

On a chilly Friday in December, Manhattan College students associated with the school’s numerous climate groups and clubs congregated on the steps of the Smith Chapel and Auditorium, took up their signs, and began chanting.

It’s a gathering inspired by Greta Thunberg, the Swedish teenager who traveled to New York City last September in an effort to take the United Nations to task. She was greeted by crowds that flooded Lower Manhattan all the way to the U.N. headquarters. Many of them were driven by Thunberg’s fury and indignation for the past, and a sense of intense, righteous hope for the future.

“We began this at the end of September, inspired by the Fridays for Future movement,” said Pamela Chasek, chair of the school’s political science department, talking about Thunberg’s protests in Europe, as she watched her students chant.

“We want to raise awareness of the climate on campus, trying to change things on campus, too.”

Chasek herself is no stranger to activism, nor its roots on college campuses. She’s been active in climate change activism since 1986, and is the co-founder of the Earth Negotiations Bulletin, a report on U.N. negotiations on climate. Chasek considers the rise of Thunberg’s Fridays movement to be the most charged and invigorating movement in years.

As the students waved their signs and called for change, Chasek returned to the foot of the steps, presiding over the demonstration like a choir conductor. Although the chants echoed through a mostly empty quad, the individual voices of some members already had reached the ears of Manhattan College administrators.

This past October, facilities vice president Andrew Ryan stepped down from his position, creating an opening that junior Sierra Arral felt was important the student body help fill. For Arral, it was a chance to push more environmental sustainability into the college’s administration.

“I thought, ‘Wow, a lot of students have concerns about our school’s sustainability issues,’” Arral said. “We drafted the petition to demand that a student be on the hiring committee for a new VP. That way, we can be sure their nomination fits our standards for an environmentally conscious campus.”

Signed by 380 students, the petition was passed on to college president Brennan O’Donnell.

“I’m glad to see the students participating,” O’Donnell said, gesturing to those in the climate demonstration. “This is important, in the school and outside the school.”

On top of the petition, other students have rushed to fill what they perceive as a space where climate justice should be. Matthew Sweeney, a junior and vice president of the school’s chapter of New York Water Environment Association, is an organizer for the campus’ Jasper Environment Coalition.

“We got together the Green Club, Just Peace, Mother Nature, and this climate event,” Sweeney said. “We’ve done a lot to bring awareness to the school, bringing the clubs’ heads together to figure out what we can do on campus.”

That determination and organizing has brought demands for school policy, inspiring a decrease in littering, proper recycling, and composting on campus, reflecting how students felt the need to improve conditions and involve more people. One of the coalition’s leaders, junior Meya Hayes thought the college needed even more participation.

“This year I started Mother Nature, a women’s environmental club,” Hayes said. “I wanted to get more women involved in environmental justice. I hadn’t seen enough from certain clubs, so I knew I had to push to make a new space that was accessible to others.”

Sophomore Anna Burnett was present for Thunberg’s march to the United Nations. She considers Thunberg’s courage and activism an inspiration.

“I’m so happy to be part of this,” Burnett said. “The (climate) strike had a profound impact on what I want to do with my life. It was such a powerful thing. She also inspired us to start this here.”

As demonstrators collected their signs and started off for their next class, Chasek reflected on her pride for her students being involved like this. She considered their demonstration between classes as a way they can stand up to climate injustice, even if it’s nothing more than creating awareness about it on the Manhattan College campus.

“They’re getting things done right here at the college,” Chasek said. “That’s important. To change your immediate surroundings is important.”