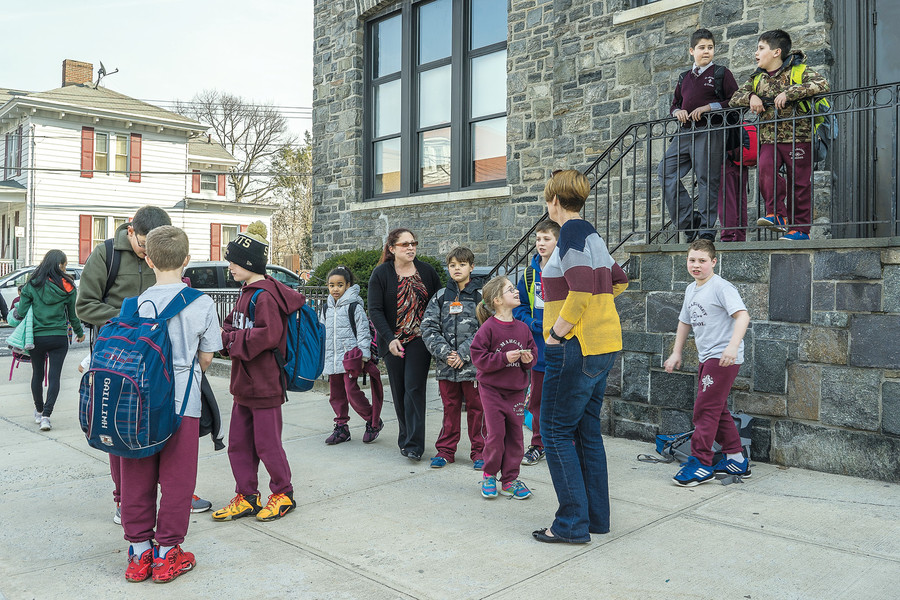 Students gat her after dismissal on Tuesday at St. Margaret of Cortona School in North Riverdale.
David 'Dee' Delgado
By Isabel Angell

Sitting in front of his computer at St. John’s School in Kingsbridge, principal Edward Higgins gleefully scrolled through the list of families who have applied to his school since January.

“Fifty-five people have applied so far this year. This floors me. At this point, I would usually be sweating,” he said on March 3, noting that the formal application window closes March 9. Families can still apply after Wednesday, but will not receive an early notice for their financial aid package, although aid will still be available.

Applications are up at St. John’s because of a brand-new admissions process for all Catholic schools in New York. Previously, parents would have to go to the schools to apply, which could be difficult for those with less flexible work schedules. Now, everything is done online through one website: www.applycatholicshoolsny.org.

Rebecca Tuttle, the director of enrollment for the city’s Catholic schools, described the process as bringing the system into the Internet age, and Mr. Higgins agreed.

“The Church does move forward. It’s 2,000 years old and it does move a little slowly, and sometimes you hear this little Italian cardinal saying, ‘That question is not yet matured,’ so you know, come on. But we’re moving forward, and this is a big deal for us,” he said.

Overall, Catholic primary schools in the northwest and south Bronx say they have seen a 12 percent jump in applications this year.

“As of this morning, we have 65 applications, and that’s pretty much pre-K through seventh grade,” he said on Monday. “In a typical school year, I’ll get 65 inquiries between January and June. So here we are, just the middle of March, and I’ve already met what would be a normal year’s interest level,” he said.

At first, Mr. Keenan said he was a little worried that the switch to the website would mean an influx of families who were blindly applying to St. Margaret’s without being genuinely interested in the school.

“Just the opposite has happened. More along the lines of 70 percent are very, very interested and are chomping at the bit to get this completed so they could get it done,” he said.

The boost in applications has been especially welcome by the first-year principal of Visitation School, Christopher White. When Kingsbridge’s Visitation Church closed in the spring of last year, Mr. White worried that would affect enrollment at the school he had just taken over.

“It’s definitely helping. I was concerned about enrollment, but this has been very helpful in getting me pointed in the right direction,” he said. “It’s going up in the right way, so I’m very optimistic and excited at the same time.

The new website has also made applying for financial aid simpler, by allowing parents to upload copies of their financial documents through their smartphones.

“Even myself, I had three children go through Catholic schools, so I know the burden of paying the tuition,” Mr. White said. “But the reward is worth the sacrifice and risk parents put themselves through. Now scholarships are easier to apply for, and parents are liking that as well.”

A previous version of this article incorrectly described the March 9 application deadline. Families who after March 9 will still be able to receive financial aid, but are not guaranteed early notification of their aid package.