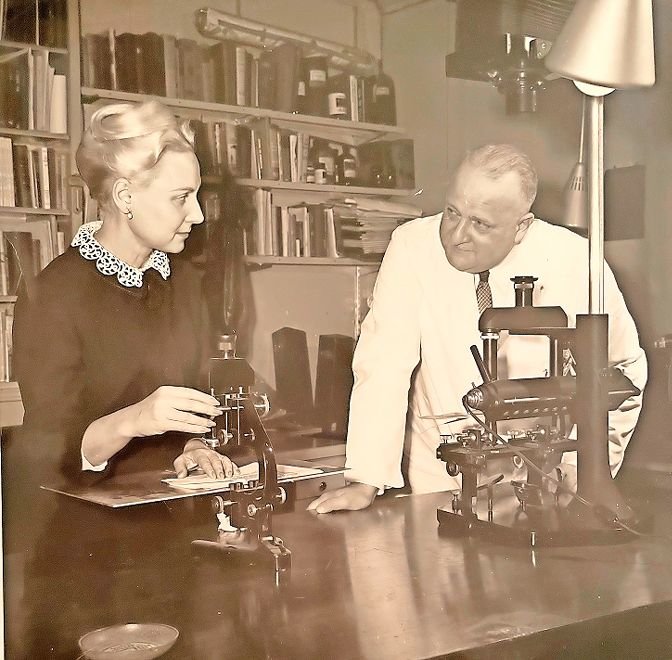 Pearl Tytell shows some of the equipment she and husband Martin used as part of their Questioned Document Laboratory, which helped determine authenticity of everything from typed documents to handwriting. Mrs. Tytell died Sept. 26 at her Scenic Place home. She was 104.
Courtesy of Pamela Tytell

Born Aug. 29, 1917 on Cannon Street on the Lower East Side, she was raised in Brooklyn. Her father, Harry Kessler, was a tailor who worked in the garment district, and immigrated from Austria when he was 16. Her mother, Yetta Feigenbaum Kessler, was 2 when her family immigrated from Poland to escape Jewish persecution.

She was preceded in death by her husband Martin on Sept. 11, 2008, and son Peter on Aug. 11, 2020, as well as sisters Ruth Turim and Irma Morgan. She is survived by daughter Pamela Tytell, a university professor and writer who lives and teaches in Paris, as well as nephew Conrad Teitell, niece Adele Teitell, grand-nieces Beth Teitell Mandl and Linda Teitell, and grand-nephews Mark Teitell, Ken Mandl, and their children, Joshua, Ben, Jennifer and Nick, as well as daughter-in-law Tikva Tytell.

She obtained her bachelor of science and master of arts degrees from New York University, at night, while running the Tytell Typewriter Co., with her husband during the day. Located in Lower Manhattan, on two floors at 123 Fulton St. — and then in an elevator building directly across the street — the typewriter rental and repair shop was created in 1933 and quickly expanded into a business specializing in creating keyboards in 142 languages, remaining in operation until 2001.

The husband-and-wife team were often asked to identify the specific typewriter used to type anonymous letters, or to modify typed documents. Both worked on the Alger Hiss case.

In 1951, she created the Tytell Questioned Document Laboratory, which specialized in dating paper and ink, as well as the forensic study of questioned handwritten and typed documents, including anonymous letters and forged signatures on checks, contracts, wills, and the like, in order to determine whether they were genuine.

For decades, she worked, testified, gave lectures, and was the only woman in a field entirely dominated by men. She continued to work as a questioned document examiner for 50 years, until 2001.

Peter, who trained and worked with his parents, took over the family business in 2001 when they retired, becoming a well-known and highly respected expert in the forensic field of questioned document examination. He continued to work, lecture and testify as a questioned document expert until a few weeks before his death.

Every election day, she would arrive at the elections board before 6 a.m., to compare signatures on absentee ballot envelopes with those on file to verify identity and prevent voter fraud. Size, slant, letter proportions, speed of writing, spacing, hesitation, pen lifts, curves, loops, crosspoints, beginning and ending strokes, shape inconsistencies within the signature are just a few characteristics used to determine the authenticity of a signature.

During 1962 and 1963, she analyzed the characteristics of Eugenia Smith’s handwriting to determine she was an imposter and could not possibly be the Grand Duchess Anastasia Romanov, the daughter of Russian emperor Nicolas II. She found basic errors in Russian, including the formation of letters and a poorly imitated signature in all of the samples of handwriting provided by Smith. This led to the conclusion that Smith was not the Anastasia believed by some to have survived her family’s massacre in 1918.

In July 2007, DNA tests performed by Russian experts on remains found near Ekaterinburg, Russia, confirmed that Anastasia had indeed been killed with other members of her family in 1918, thereby confirming Pearl’s conclusion — conclusions that were the subject of a Life magazine cover story on Oct. 18, 1963.

In 1971, when Dita Beard denied writing a memo to her boss suggesting that an ITT subsidiary would donate $400,000 to the upcoming Republican National Convention if three antitrust suits were settled in favor of ITT, Pearl used forensic analysis to determine the memo was genuine. Her findings led to a law limiting campaign financing.

She was the questioned document expert in the U.S. government case which convicted the Rev. Sun Myung Moon of conspiracy and filing false federal income tax returns. She determined that genuine signatures of the Unification Church leader appeared on personal checks issued during the 1970s on several Chase Manhattan bank accounts.

Because a person’s handwriting changes over the course of time, she tracked these changes and modifications to determine when particular handwritten evidence had been written by Moon.

By studying the paper and the dandy rolls used to print watermarks on paper, she dated the watermarked paper used by Xerox beginning in March 1974 to determine that Unification Church documents had been deliberately reconstructed, redone and backdated well before the date the paper was distributed by Xerox in a deliberate attempt to protect Moon from the IRS investigation.

In 1947, she and Martin purchased a house in Riverdale where they raised children Peter and Pamela. Both graduated from Riverdale Country School.

The family were founding members of the Riverdale Reform Temple with Rabbi Charles Shulman. The services were held in their living room until the Riverdale Temple was built on Independence Avenue and dedicated in 1954.

When promoters planned to build high-rise apartment buildings, she created the Along the Hudson Home Owner’s Association, whose legal actions influenced the current zoning laws, which restrict all new construction to one-family dwellings in the area west of the Henry Hudson Parkway. The association also was instrumental in the creation of several parks to preserve this section of Spuyten Duyvil.

She continued to live at home, in the house she adored overlooking the Hudson River, until her death.