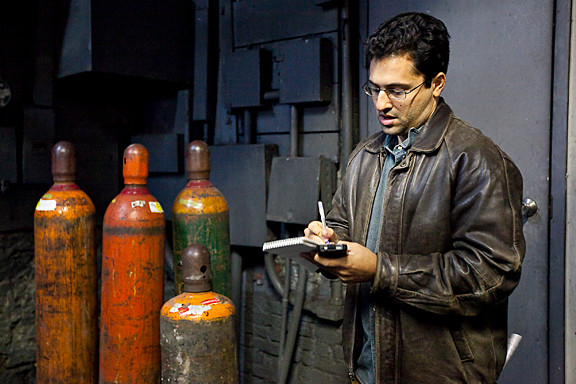 The Riverdale Press has named Shant Shahrigian as its new editor. Publisher Richard Stein and Stuart and Cliff Richner, the CEOs of Richner Communications, which owns The Press, announced the decision this week.

Mr. Shahrigian, 30, is charged with maintaining the tradition of excellence at the Pulitzer-Prize winning publication and helping the newspaper grow.

“I feel honored that The Press has entrusted me with such a great responsibility to the staff, community members and the city,” Mr. Shahrigian said. “I look forward to leading the paper’s strong coverage of politics, education and crime along with the many people and places that make the northwest Bronx special.”

Mr. Shahrigian joined The Press as education reporter in summer 2013. He quickly rose through the ranks to become the politics reporter and associate editor, covering some of the city and state’s hottest races this year. He will continue to cover politics and public policy for the newspaper.

Prior to joining The Press, Mr. Shahrigian worked out of Germany for two years covering Europe and the Caucasus for Germany’s international broadcaster, Deutsche Welle, and other outlets. He has also written stories for The Guardian, PRI’s “The World” and Voice of America, where he got his start in journalism as a news writer on the overnight shift after graduating from St. John’s College in Annapolis, Maryland.

A lifelong lover of languages, Mr. Shahrigian speaks several European tongues. He said he is looking forward to continuing to learn the language of Riverdale, Kingsbridge and the rest of the Bronx.

“I have come to know Riverdale and the rest of our coverage area as exciting places full of people who deeply care about their communities,” said the editor, who lives a short drive away in the south Bronx. “I love talking to people here about what matters to them and covering their causes and concerns in print.”

In 2008, the Steins sold The Press to Richner Communications, which has invested in keeping the paper strong alongside its 19 award-winning Herald Community Newspapers in Nassau County, among other publications.