'Is This A Room' is more than a footnote 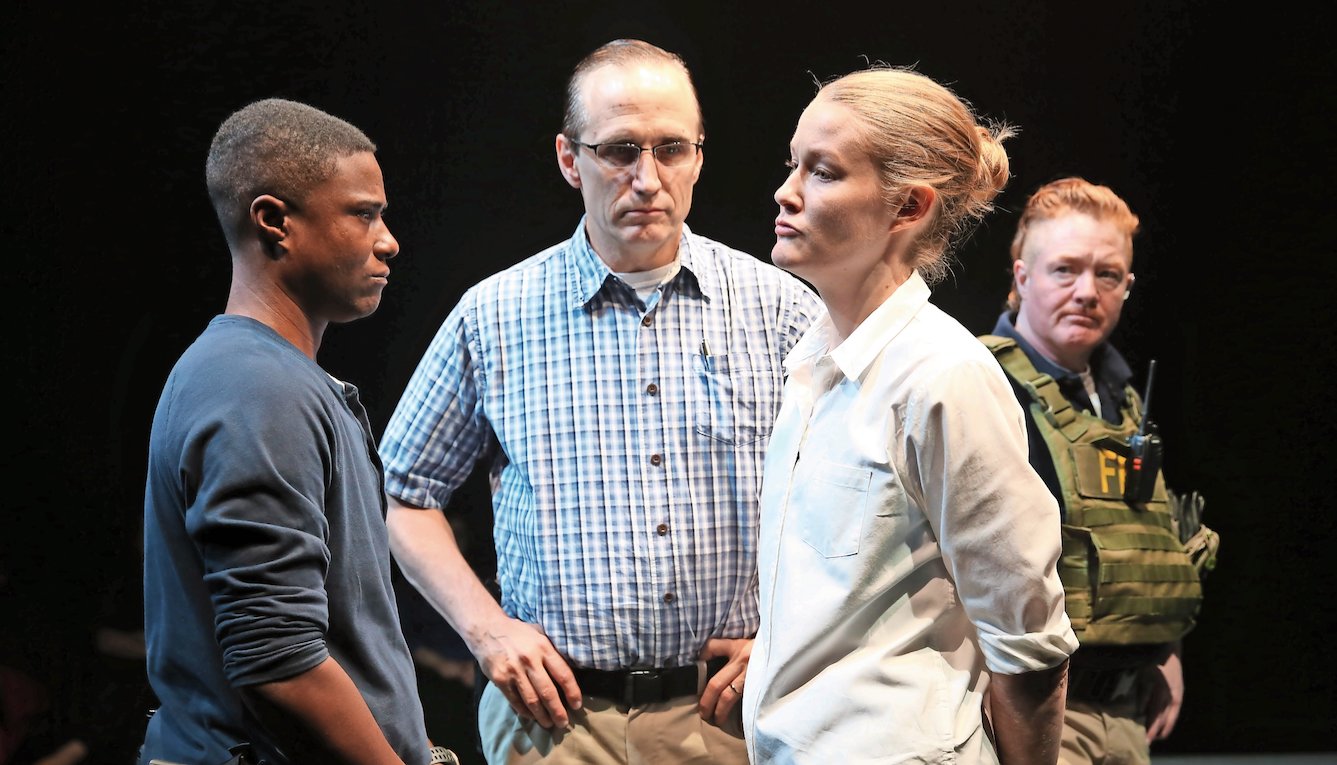 Emily Davis plays a real-life NSA worker who was questioned by members of the FBI — played by Peter Simpson, Becca Blackwell and T.L. Thompson — in Tina Satter’s re-enactment of the encounter that coincides with the firing of FBI director James Comey.
Courtesy of Carol Rosegg
Is This A Room

In unique fashion, the Vineyard Theatre zeroes in on a true story in Tina Satter’s “Is This A Room.”

In the timeline of the Trump presidency, this account of a U.S. Air Force veteran with a curious name might get overshadowed by the daily fireworks of the news cycle. But this theatre piece brings Reality Winner’s predicament into tight focus by detailing a wary encounter between two big players — the FBI and the National Security Agency.

The modest proportions of this production carry the imprint of vast bureaucracies, national security and the media, and offer as well a chilling portrait of the subtle precisions of human behavior.

On June 3, 2017, three FBI agents arrived a Winner’s home in Augusta, Georgia, to question her. A linguist fluent in Persian and Afghan dialects, she was working for an NSA-affiliate agency after her Air Force service, in which she translated intercepted conversations to assist its drone operations.

“Is This A Room” is a verbatim presentation of the FBI recording of the encounter, complete with digressions, crosstalk, and all of the unconscious interjections (“um,” “er,” etc.) that pepper conversations.

The redactions in the FBI transcript are rendered with literal blackouts and moody flickers in Thomas Dunn’s lighting design. One of the FBI agents conducts private dialogues with a phone and walkie-talkie. Lee Kinney’s sound design captures the underlying menace of these cryptic fragments.

Such theatrical grace notes underscore the nervous tango of conversation and interrogation between the FBI agents and their quarry. Parker Lutz’s scenic design follows his minimalistic aesthetic. It is the words that matter, and the everyday hesitations and meanderings of speech that cloak — and then reveal — the epic stakes here.

Satter stages this FBI document so that the four characters appear to ebb and flow at random, with select moments of direct confrontation. Three men circle a woman, who is powerless. No amount of casual banter diminishes the balance.

The agents never read Winner her Miranda rights (a loophole is in their favor). The agents take note of her linguistic ability and services in the armed forces. She appears nervous. We learn why.

At the time of this incident, evidence of the Russian interference in our 2016 election was in the public domain. Winner, for whatever reason, chose to be a whistleblower. She took action, coincidentally, on the day Trump fired FBI director James Comey. She was not sophisticated enough to cover her tracks, and the FBI swooped in on her days later.

Emily Davis plays Winner with frank, understated tension, while the three FBI agents (Becca Blackwell, Pete Simpson and T.L. Thompson) close in. They all bring a deadly everyday simplicity to this cautionary affair.

Implicit in this story is the scale that differentiates the workers — both Winner and the FBI agents — from the upper echelons, and from the national conversation on U.S. policy. The talent that keeps the national security apparatus up and running may get enmeshed in the gears. Idealism and individuality are not on the flow chart.

That fact is, in this spotlight on our government at work, an impulse or a whisper can become a club, one to threaten, or one to beat down the truth.