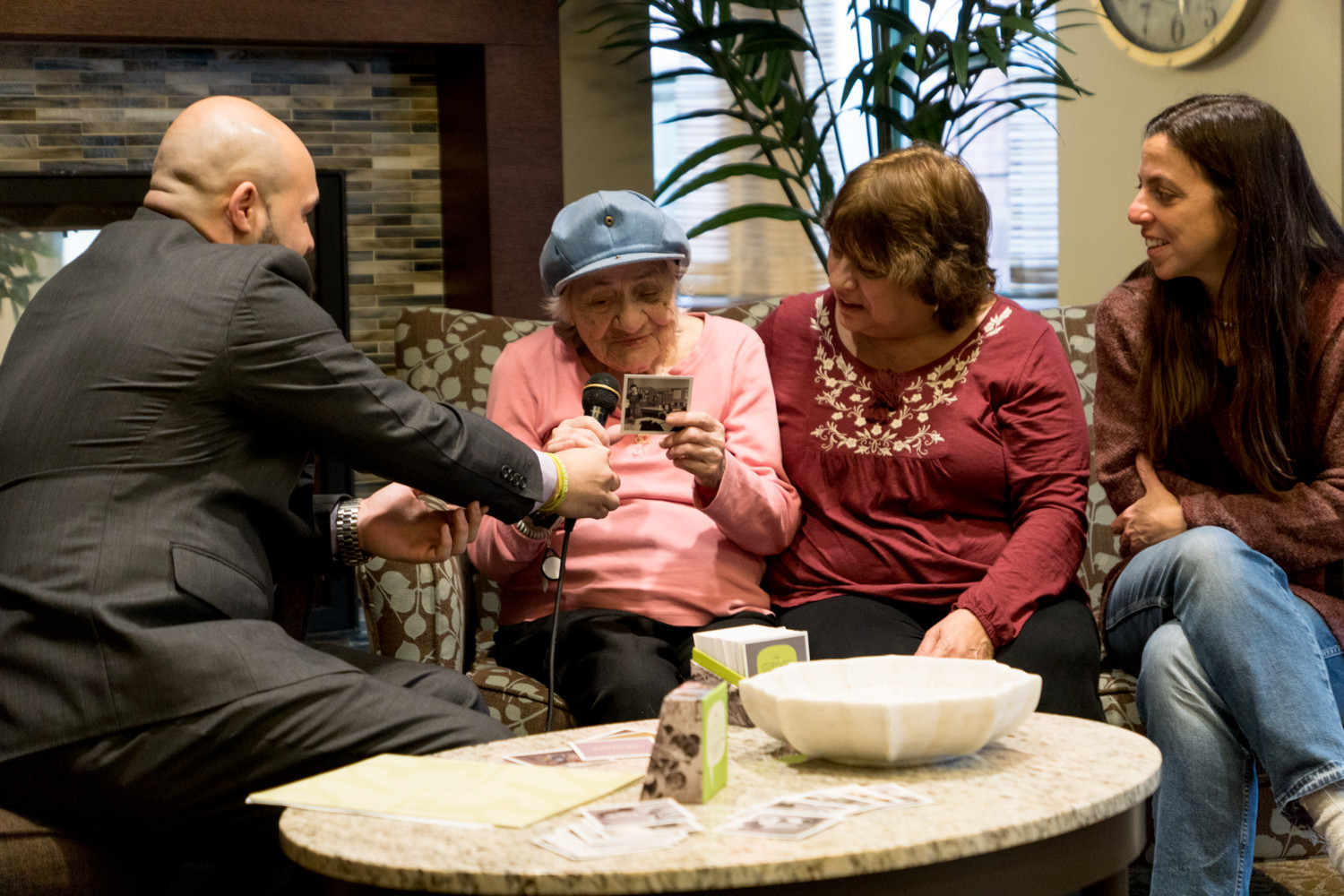 Ruth Abrams reads a question card during the Storywise event at Atria Riverdale. In addition to Storywise being a free app, it is available as a boxed set of cards with prompts asking to share a memory like cooking with your family or a noteworthy vacation.
Julius Constantine Motal 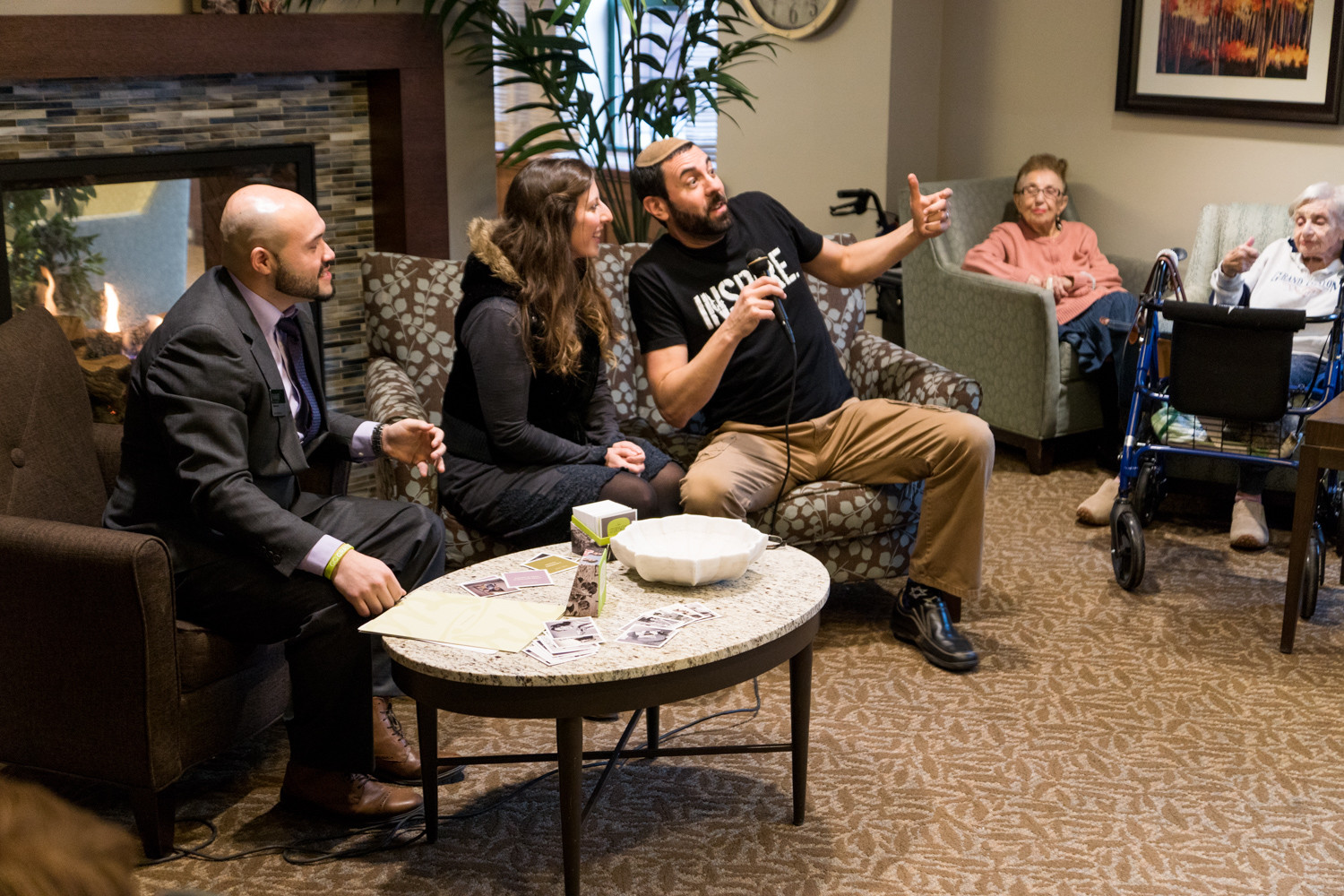 Rabbi Mordechai Walker shares a humorous story about him and his wife Rebecca encountering a bear while on a mountain and their attempt to get away, all during a storytelling event at Atria Riverdale. The senior assisted living facility created the free app Storywise where users could recall memories prompted by questions from the app. It’s available on iTunes.
Julius Constantine Motal 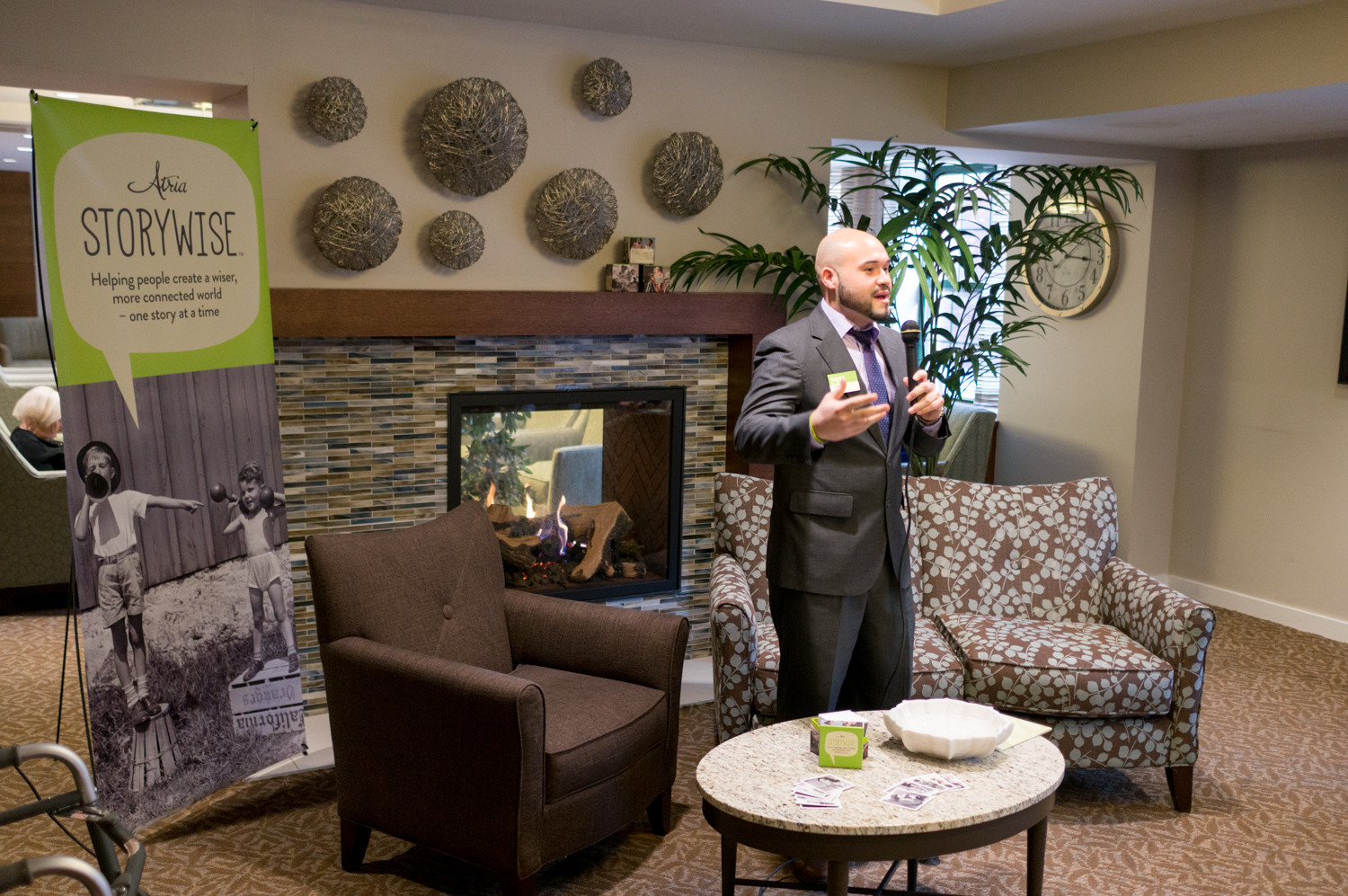 Frankie Diaz, an employee of Atria Riverdale, uses Storywise — a free app and set of questions — with his family. ‘My mom shared some stories with me that I never would have thought to ask,’ he says. ‘It really prompts you to share the history of things in your life that you probably wouldn’t share on a normal basis.’
Julius Constantine Motal 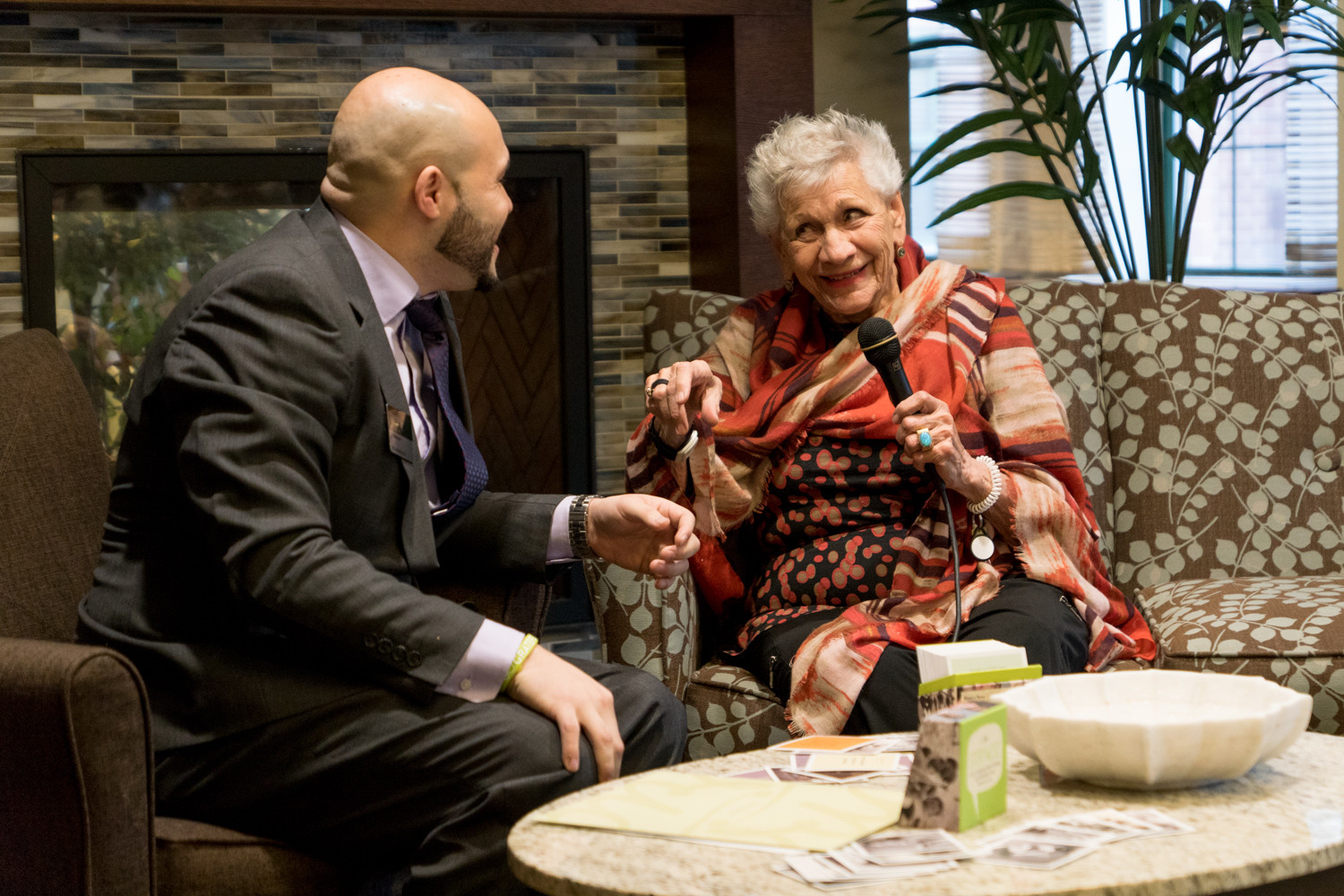 Atria Riverdale resident Sherry Roberts picks a card from Storywise, asking her to share something she wishes she was good at. Some of the other questions Storywise asks include times of bravery and first meals cooked on your own. Atria Riverdale created the app and set of questions as a guide for users to capture their oral histories.
Julius Constantine Motal 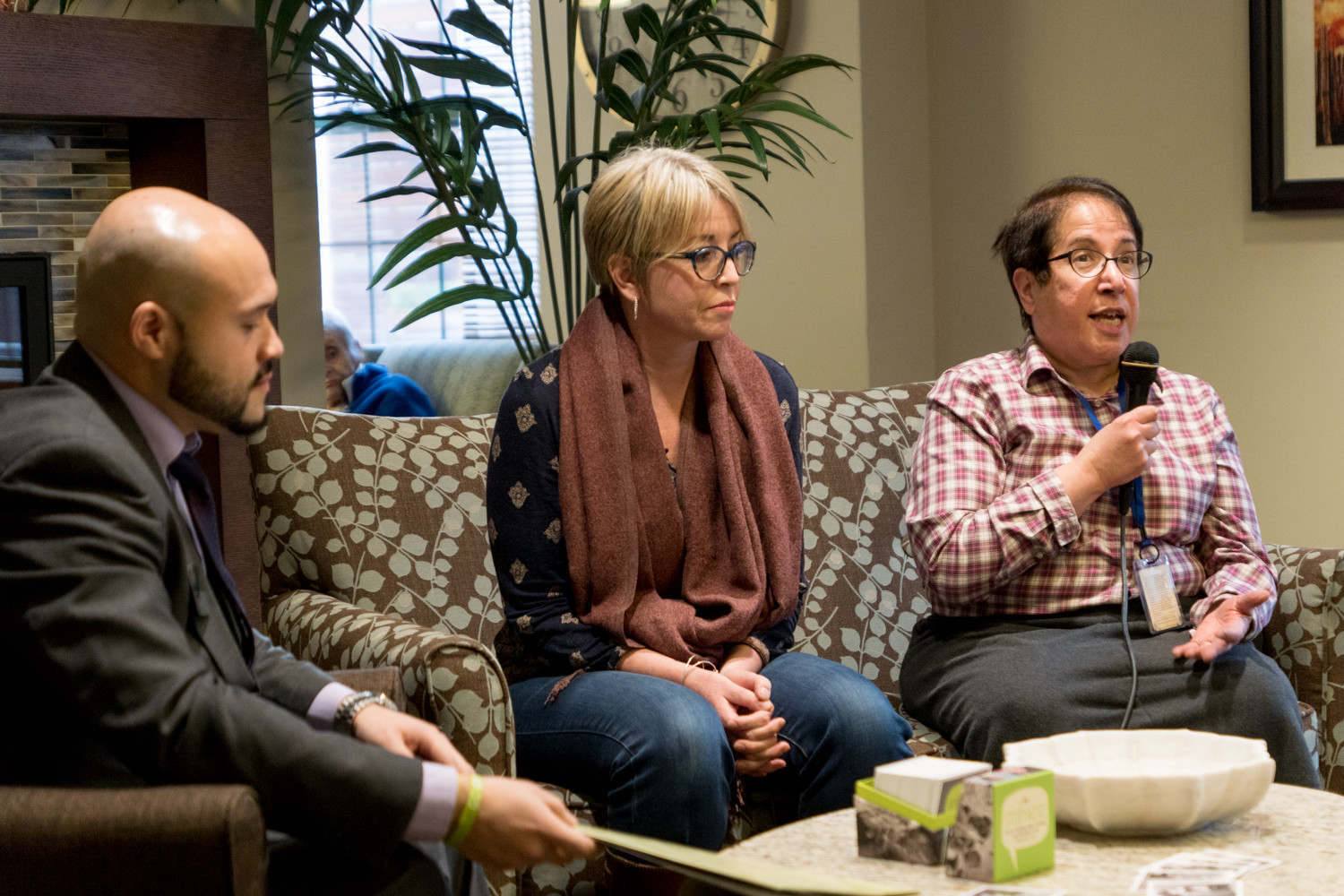 Helene Samberg, a librarian at the Riverdale branch, talks about the act of storytelling at Atria Riverdale. Stories give you more details about a time period than a history book could capture, Samberg says.
Julius Constantine Motal 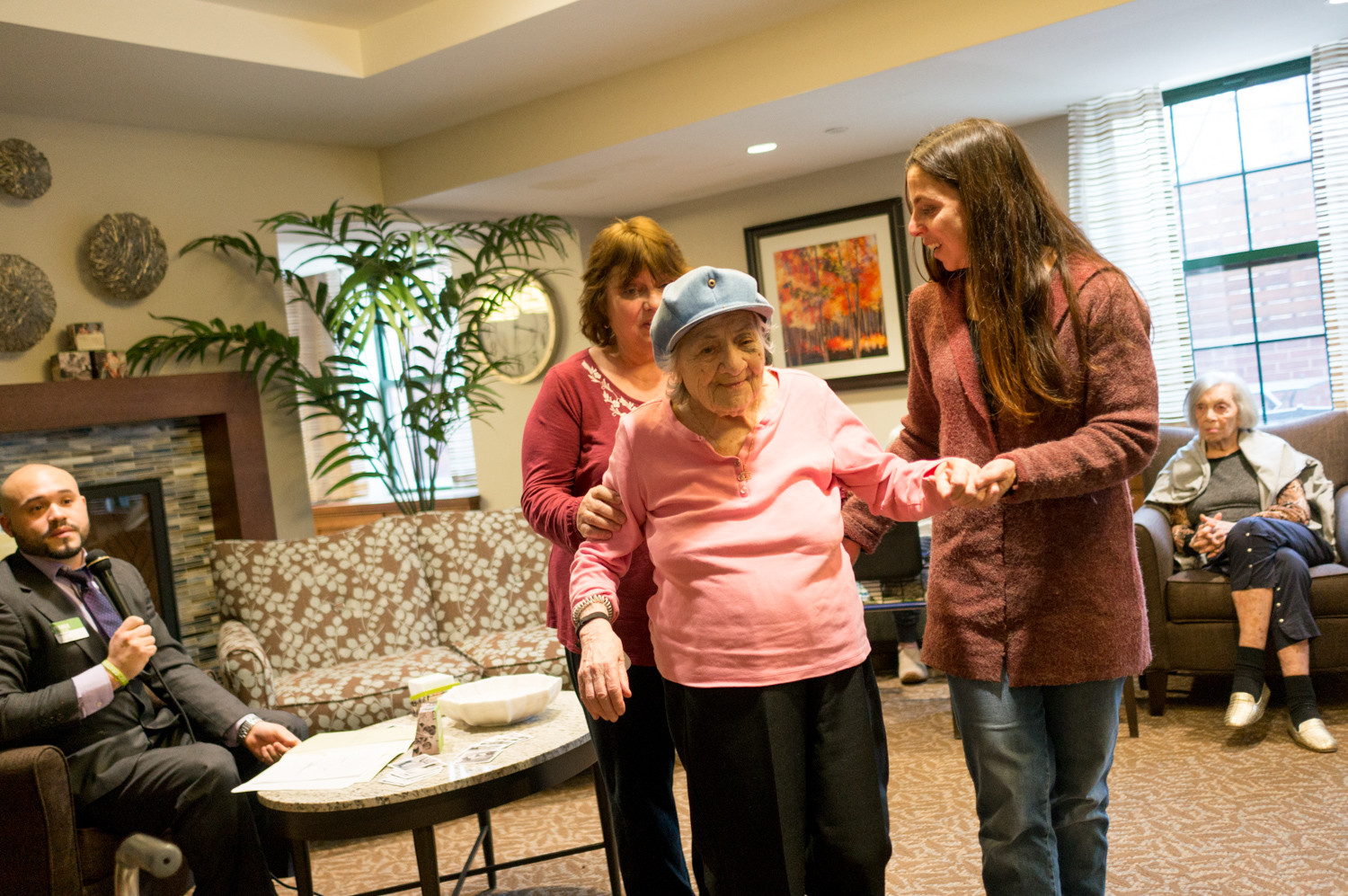 It was an afternoon of sharing and capturing personal stories, all led by Frankie Diaz.

“We encourage you to laugh with us, to cry with us and just to have a good time,” he said.

Diaz is the life guidance director at Atria Riverdale, an assisted living facility off the Henry Hudson Parkway. And on this particular day, he hosted “Better Together” an event where the audience was asked to share their life experiences with a little help from a smartphone app called Storywise.

Developed by the facility’s parent company, Atria Senior Living, the app records stories and memories, prompting them through questions and cues to help jog the memory.

One Atria Riverdale resident, Grace Hickey, said she didn’t want to be a “stick in the mud.” She shared a story about her family adopting a two-week-old puppy from the pound — a dog her family had for 15 years. She can’t remember her name now, but said the pet gave her family “lots of love and plenty of good memories.”

Rebecca Confino attended the event with her mother, Barbara, along with Rebecca’s grandmother Ruth Abrams, who lives at the facility. When they learned “Better Together” was taking place, the three generations of women decided to take part together.

The afternoon served as a surprise for Confino, who thought she knew all of her grandmother’s childhood stories. Prompted by Storywise’s list of questions, Abrams discussed the childhood teacher who inspired her.

When Abrams first arrived in the United States, she was very young and didn’t speak English well. When Abrams told her teacher she loved to read and write, she gave Abrams a book and asked her to read it out. Afterward, the teacher gave Abrams a round of applause.

“Those are stories you want to hear,” Confino said. “You want to hold onto them. You want to pass them on generation to generation. She’s got some great stories

Rena Hyman, Atria’s executive director, said Storywise gave her a chance to learn more about the seniors living there.

“It just makes every interaction more meaningful,” Hyman said. “I can look at residents who don’t remember what day it is and remember something beautiful … and I can bring that up, and it just makes everything I do better.”

At least one Atria staff member took the project to heart — by taking home a set of the story prompt questions. Diaz used that as an opportunity to explore memories with his family on Christmas Eve.

“My mom shared some stories with me that I never would have thought to ask,” he said.

“It really prompts you to share the history of things in your life that you probably wouldn’t share on a normal basis.”

Diaz’s mother lived a short distance from her grandmother in Puerto Rico. Growing up, her grandmother would make the codfish, or bacalaitos, and coffee for her and her siblings to eat on the way to school each morning. The two laughed, especially since she probably had the worst breath in the classroom.

For every story shared through the wisdom library on Storywise’s app through Jan. 31, Atria said it will donate $1 to the American Library Association, a nonprofit working for the leadership, development and improvement of libraries.

The Atria also gives out a boxed set of the story prompts when visitors tour the facility, and also have placed the boxes placed around the facility.