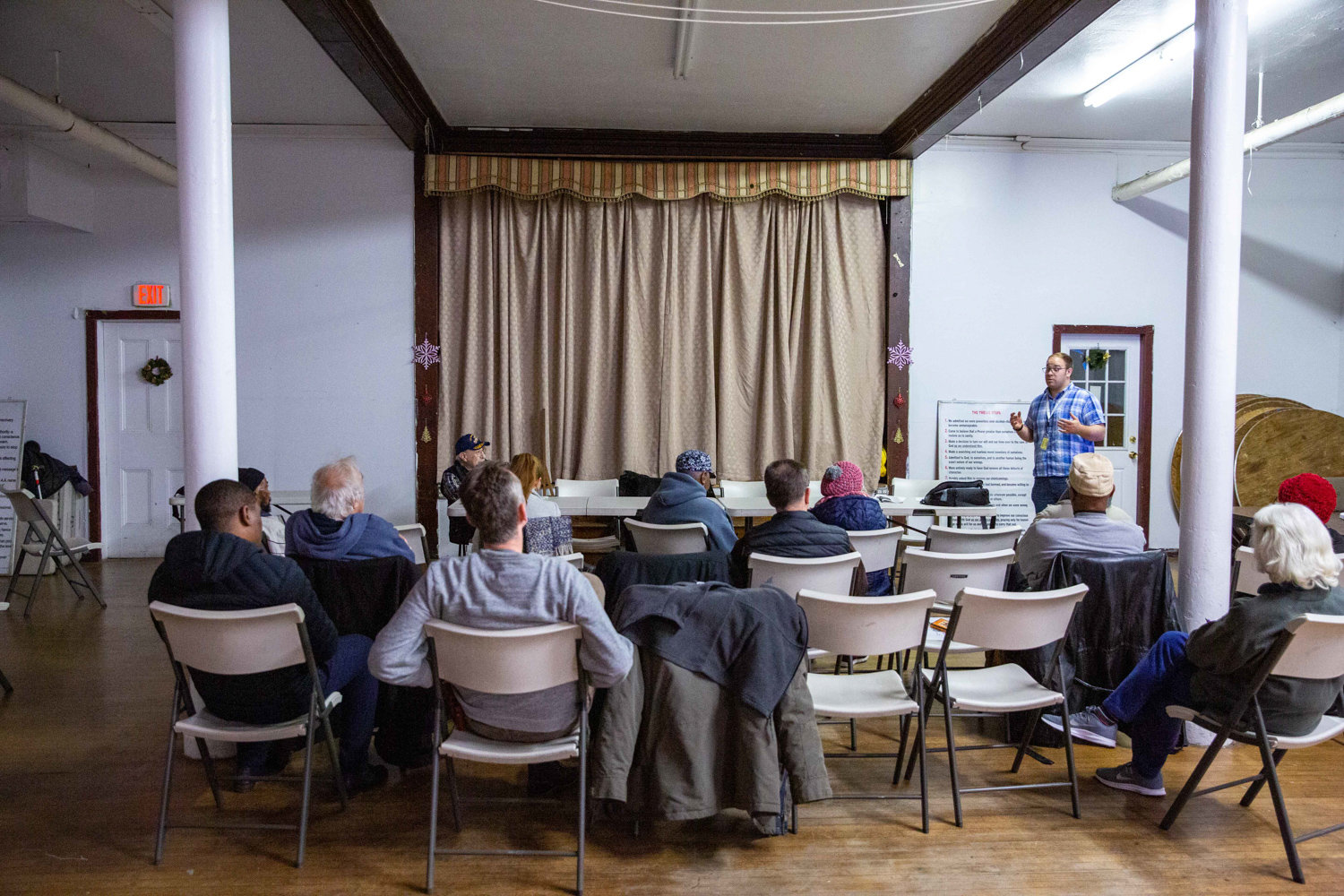 Members of the Bronx Tinnitus Support Group listen to Charles Levin, a research assistant in Dr. Diana Martinez’s lab at Columbia University’s psychiatry department, talk about a current study of the condition being carried at the university’s Irving Medical Center.
EIAN KANTOR 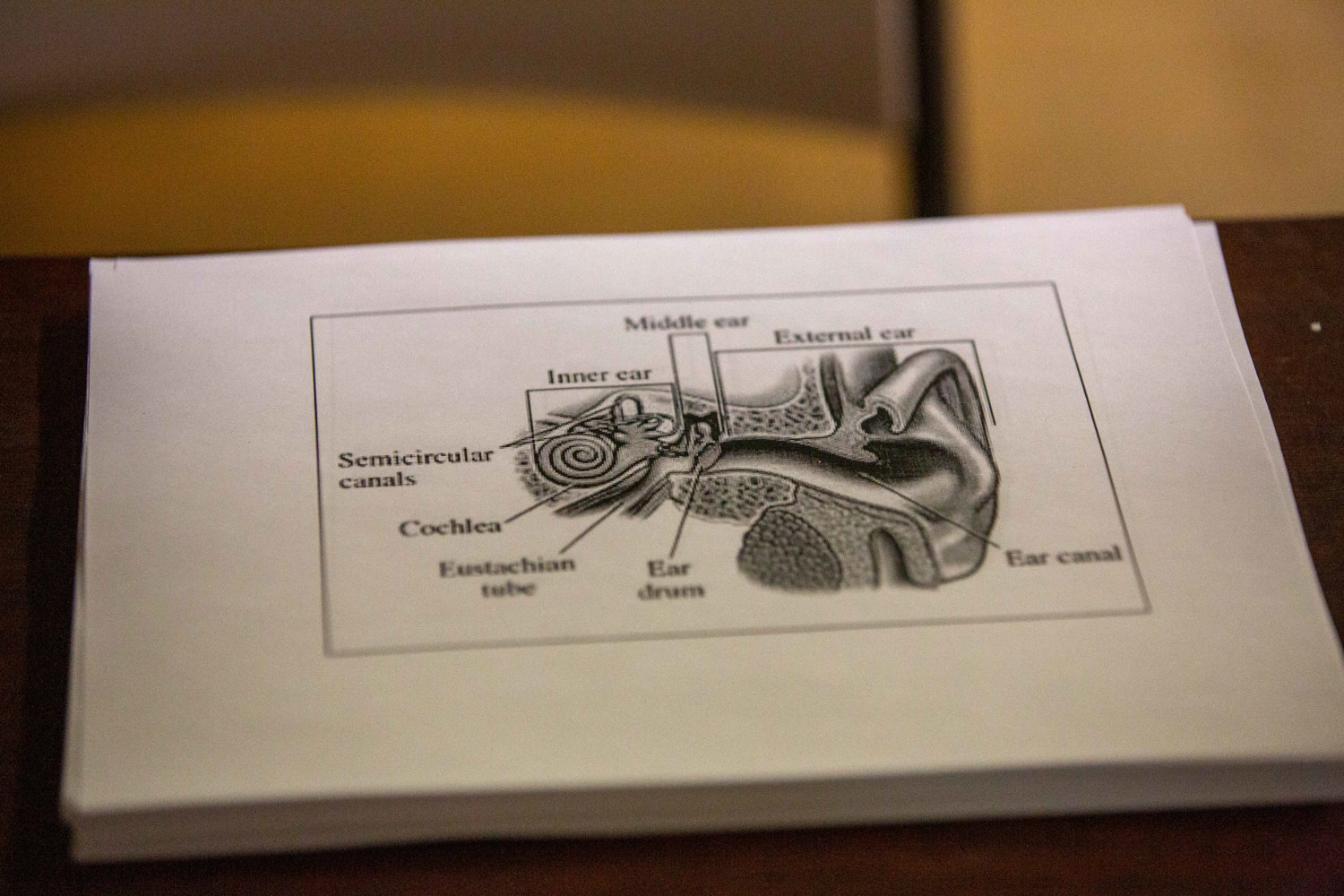 A stack of ear diagrams were made available for members of the Bronx Tinnitus Support Group for their monthly meeting at the Episcopal Church of the Mediator on West 231st Street.
EIAN KANTOR 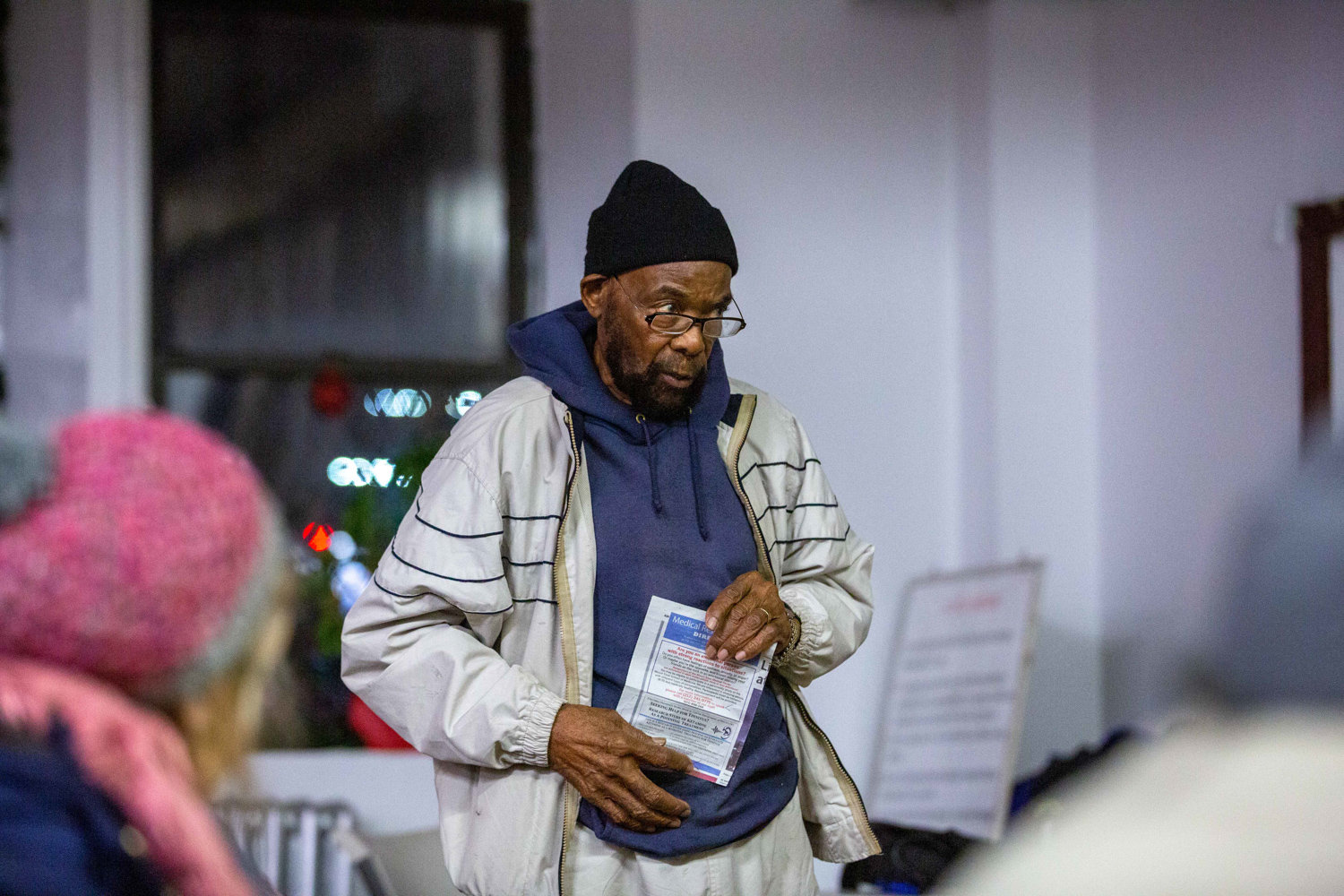 Karie Nabinet, co-chair of the Bronx Tinnitus Support Group, asks Dr. Diana Martinez about how her team figured out ketamine — a drug typically used in administering anesthesia — might be used to ease tinnitus symptoms.
EIAN KANTOR 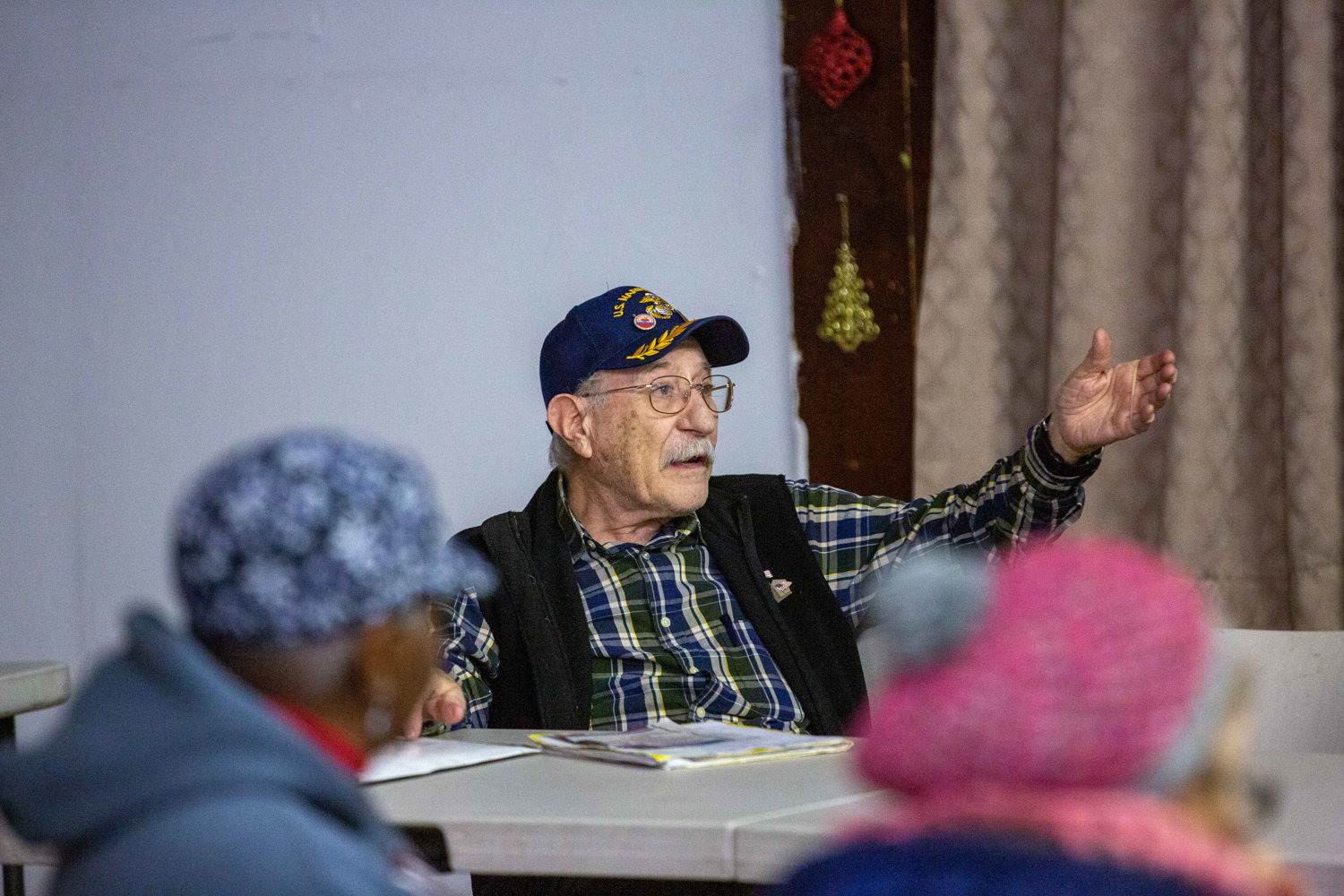 Herb Barret, co-chair of the Bronx Tinnitus Support Group, asks Charles Levin a question about the treatment being offered as part of the Columbia University study.
EIAN KANTOR 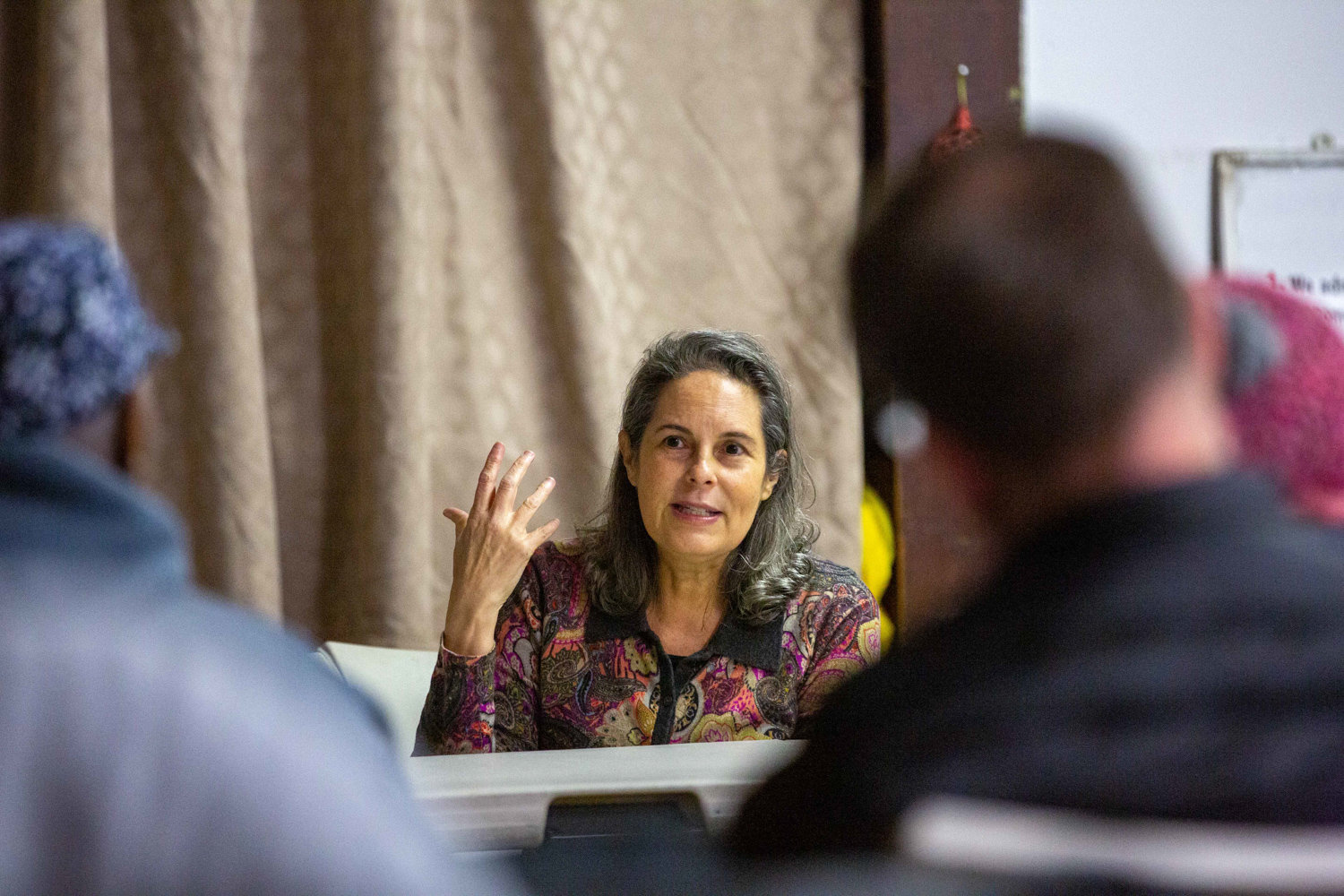 Dr. Diana Martinez, a psychiatrist from Columbia University who specializes in addiction research, speaks to the Tinnitus Support Group about her study, which uses the anesthesia drug ketamine as a short-term treatment for tinnitus symptoms.
EIAN KANTOR 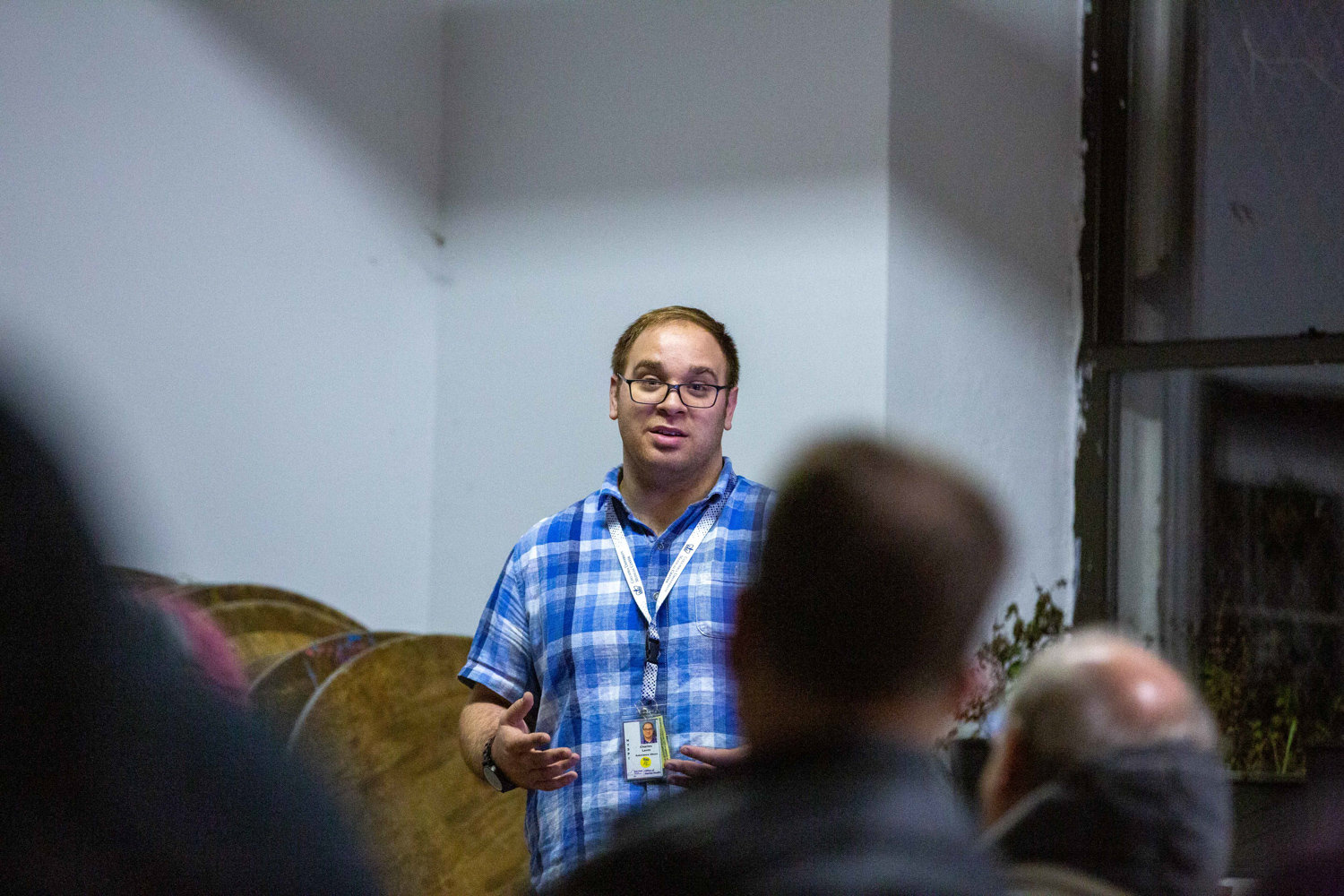 Charles Levin, a research assistant from Dr. Diana Martinez's lab at Columbia University’s psychiatry department, talks about a tinnitus study being conducted at the university’s Irving Medical Center.
EIAN KANTOR
Previous Next
What is tinnitus?

The Mayo Clinic describes tinnitus as “the perception of noise or ringing in the ears,” a condition that affects as many as 1-in-5 people. Except it’s not really a condition, but usually a symptom of an underlying condition, according to the research center. Tinnitus can be caused by a number of things, including age-related hearing loss, ear injury, or a circulatory system disorder.

They say when your ears are ringing, someone must be talking about you. But for the dozen or so people who assembled at the Episcopal Church of the Mediator on a recent cold Tuesday night, that noise is something far more serious.

This group gathering at the West 231st Street church is part of the Bronx Tinnitus Support Group, which meets each month.

Tinnitus is a ringing in the ears — a persistent, usually high-pitched sound. The sound can fade in and out, or become less noticeable, but is almost always present.  It’s usually caused by damage to the hair cells in ears, said Dr. Diana Martinez, a psychiatry professor at Columbia University Medical Center.

Martinez recently visited the group to share details of a clinical trial that will use small doses of ketamine, a mild sedative, to treat tinnitus. The ketamine is expected to calm down the thalamus, the part of the brain that, simply, tells you what to pay attention to.

When someone is walking down the street, talking to a friend as an ambulance races with its sirens blaring, it’s the thalamus that prompts you to pay attention to the ambulance and figure out what’s going on. Martinez believes that small doses of ketamine — a drug used primarily in anesthesia — will convince the thalamus to stop telling the brain to pay attention to the ringing.

The tinnitus group is largely dubious about the treatment, expressing some concern about using a drug like ketamine, especially in the middle of the opioid crisis — although ketamine is not an opioid.

They might be a little jaded, too. There is no cure for tinnitus, something those who suffer from it are more than aware of.

It’s part of why Herb Barret and Karie Kofi Nabinet started the group some 10 years ago. They discovered they had tinnitus in common, and realized there was little to no support or information about the problem.

When Barret stands outside the church, hanging signs on the fence lining West 231st about the monthly meeting, people often stop to ask him about it, many times revealing they, too, have ringing in their ears and need help.

Nabinet developed tinnitus at least a decade ago, he said. A former professor at Stony Brook University, Nabinet worked as a mental health counselor for children struggling with social and emotional delays, and always had been interested in research. Even so, he hasn’t been able to discover how he developed tinnitus.

“It absolutely frightened me,” Nabinet said after realizing he had it. “I had no experience, no information, and no one to talk to.”

He went online and found the American Tinnitus Association, a discovery he says saved his life. The association directed him to a support group on Long Island, the closest one to his home in the Bronx at the time.

“It occurred to me that, that long trip from Penn Station to Long Island where that meeting was that that trip was very cumbersome,” Nabinet said. “So I thought, why don’t I start a tinnitus support group right here in our community?”

Barret joined right away, as did his wife, Frieda.

“At first it caused me to isolate myself and made me very curious about what was going on,” Nabinet said. “And I got more information, and started to educate myself about what this phenomenon was. It started to alleviate my anxiety.”

Barret can trace his tinnitus back to his military days working with jet engines. Long exposure to loud noises — likened to a “constant explosion” by Charles Levin, Martinez’s research assistant — is one of the leading causes of tinnitus and hearing loss.

The hair cells in the ear aren’t like the hairs on someone’s head. Once they’re damaged, they can’t grow back or be repaired. And those cells are instrumental to hearing. Hearing is ultimately less about the ears and more about the brain, and the cells send the vibrations of sound waves to the brain, where they’re interpreted as sound.

Where a need for knowledge and support drives people to the support group, hearing that there’s no cure can just as easily drive them, said the group’s secretary, Carol Garvin.

Garvin developed tinnitus three years after she had a brain tumor removed. She joined the group shortly after it started.

While some people do things like play the radio on low, or keep a television on to try to drown out their tinnitus, she prefers to just live with hers.

“My tinnitus tries to compete with the music,” Garvin said. “It tries to be louder.”

When she’s focused on something — a book, a project — she can’t hear the ringing as clearly. But she and Barret both said that after the meeting that night, the ringing was loud and clear after nearly two hours of tinnitus discussion.

Getting support is one thing, she said, but it’s also rewarding when new people come in, feeling overwhelmed by their diagnosis. She and others like her can help them learn to cope.

“When people hear the term, ‘You have tinnitus, and it’s incurable, and nothing can be done about it,’ I think that’s the wrong message, and we should create a positive message. An optimistic message,” Nabinet said. “And let people to always know it’s important to stay open and look for the possibilities.”

The Bronx Tinnitus Support Group meets on the first Thursday of every month at the Episcopal Church of the Mediator, 260 W. 231st St. For more information, visit ATA.org.