This tree fell, and everyone heard it 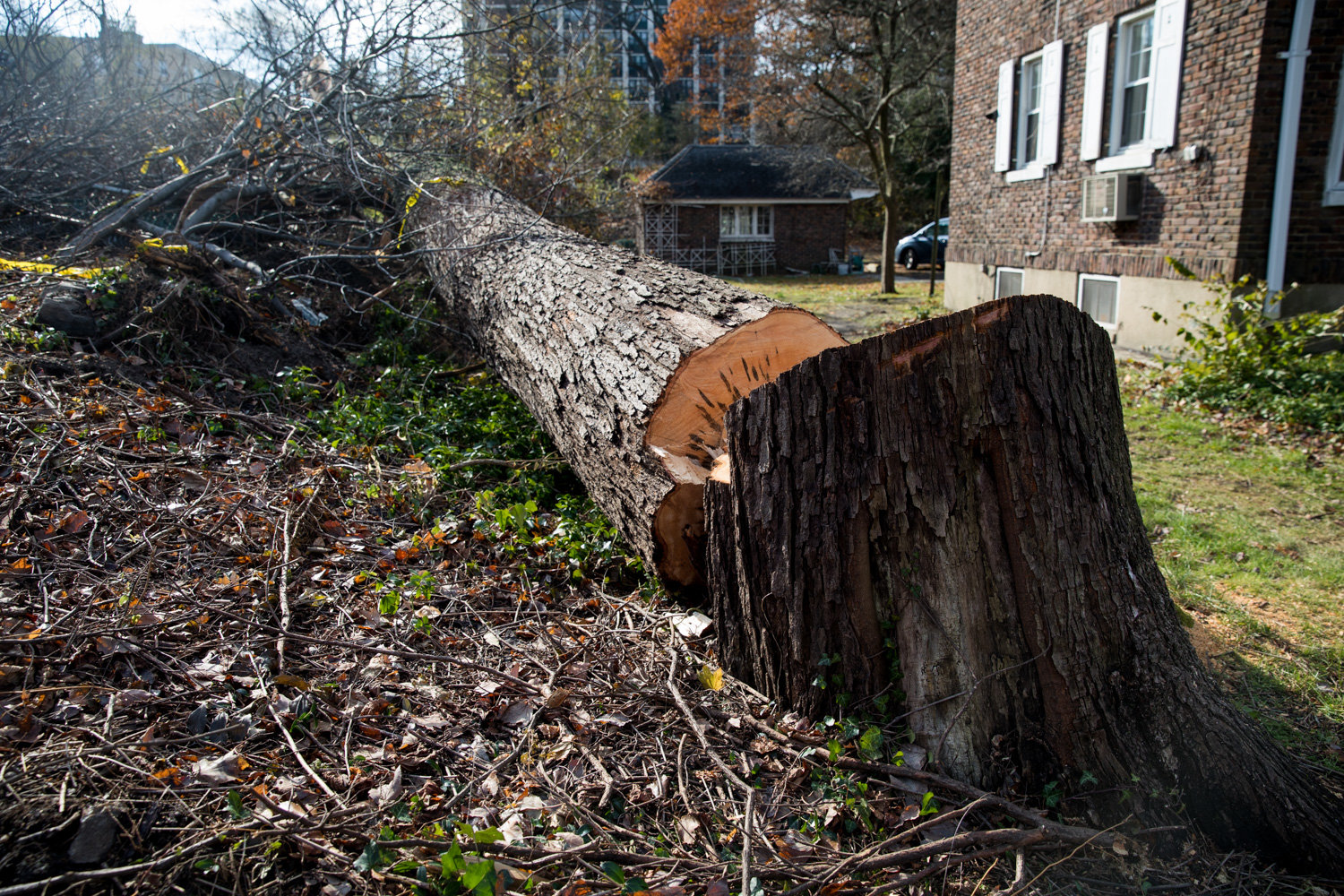 A felled tree lays on the ground between a private residence and the parking lot for Schervier Rehabilitation and Nursing Center near the corner of West 231st Street and Independence Avenue. City officials claim the tree was cut down against Special Natural Area District regulations.
JULIUS CONSTANTINE MOTAL 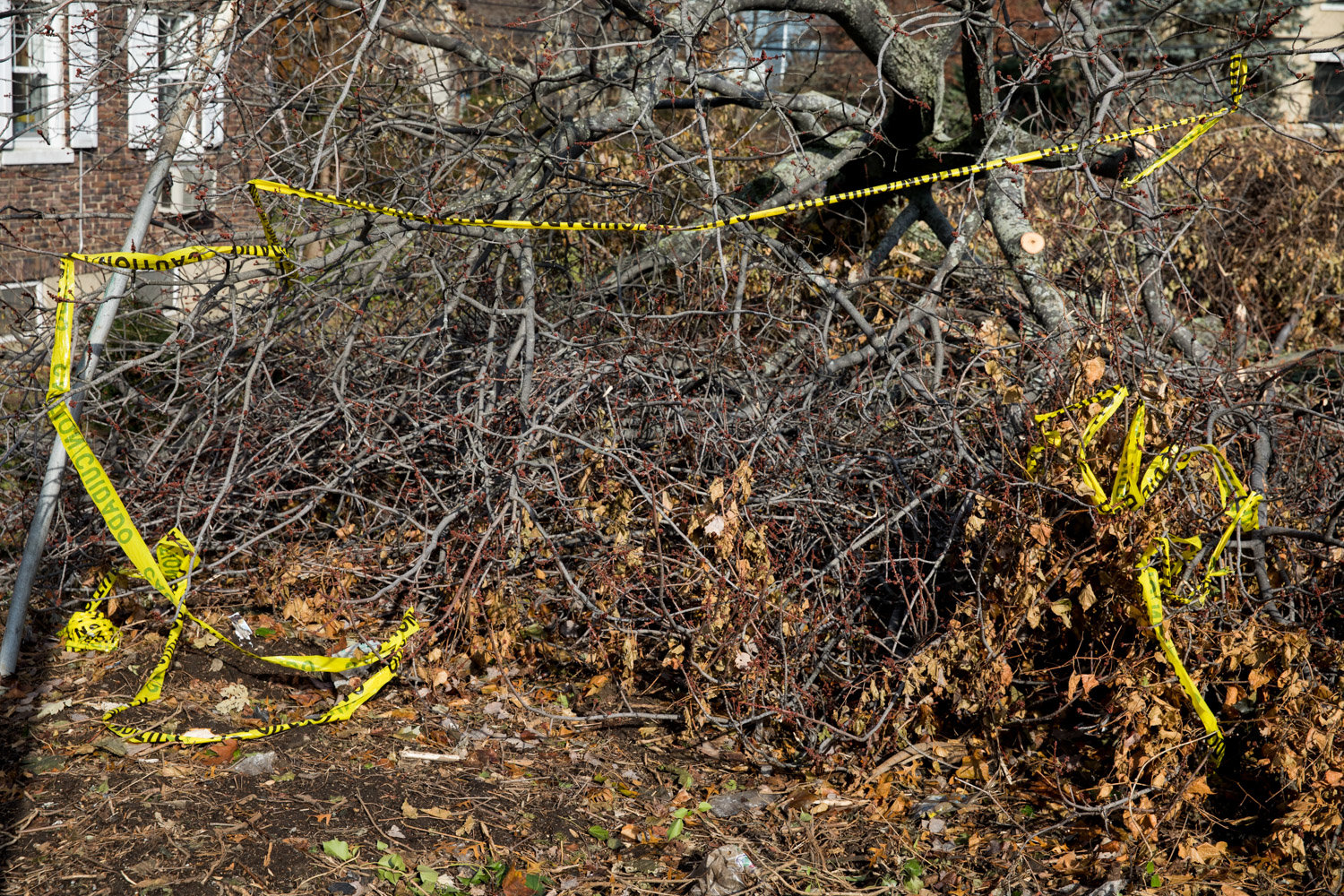 Yellow caution tape hangs off the branches of a felled tree near the corner of West 231st Street and Independence Avenue. The tree lies within the Special Natural Area District, and city officials say it was removed against those conservation regulations.
JULIUS CONSTANTINE MOTAL 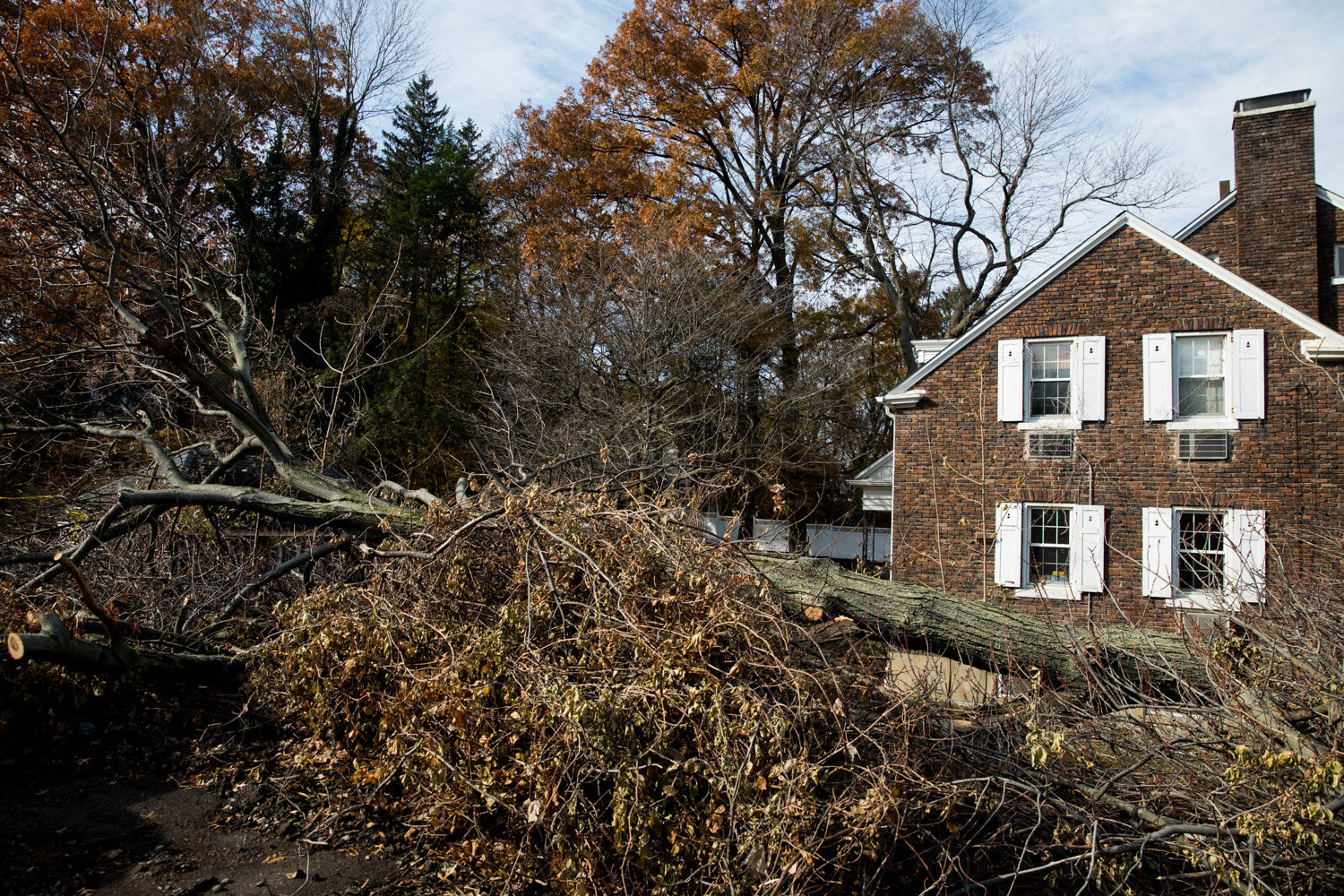 It is unclear who is responsible for the felled tree that lays between a private residence and the parking lot for Schervier Rehabilitation and Nursing Center near the corner of West 231st Street and Independence Avenue. What is clear to city officials, however, is that it was brought down against Special Natural Area District regulations.
JULIUS CONSTANTINE MOTAL 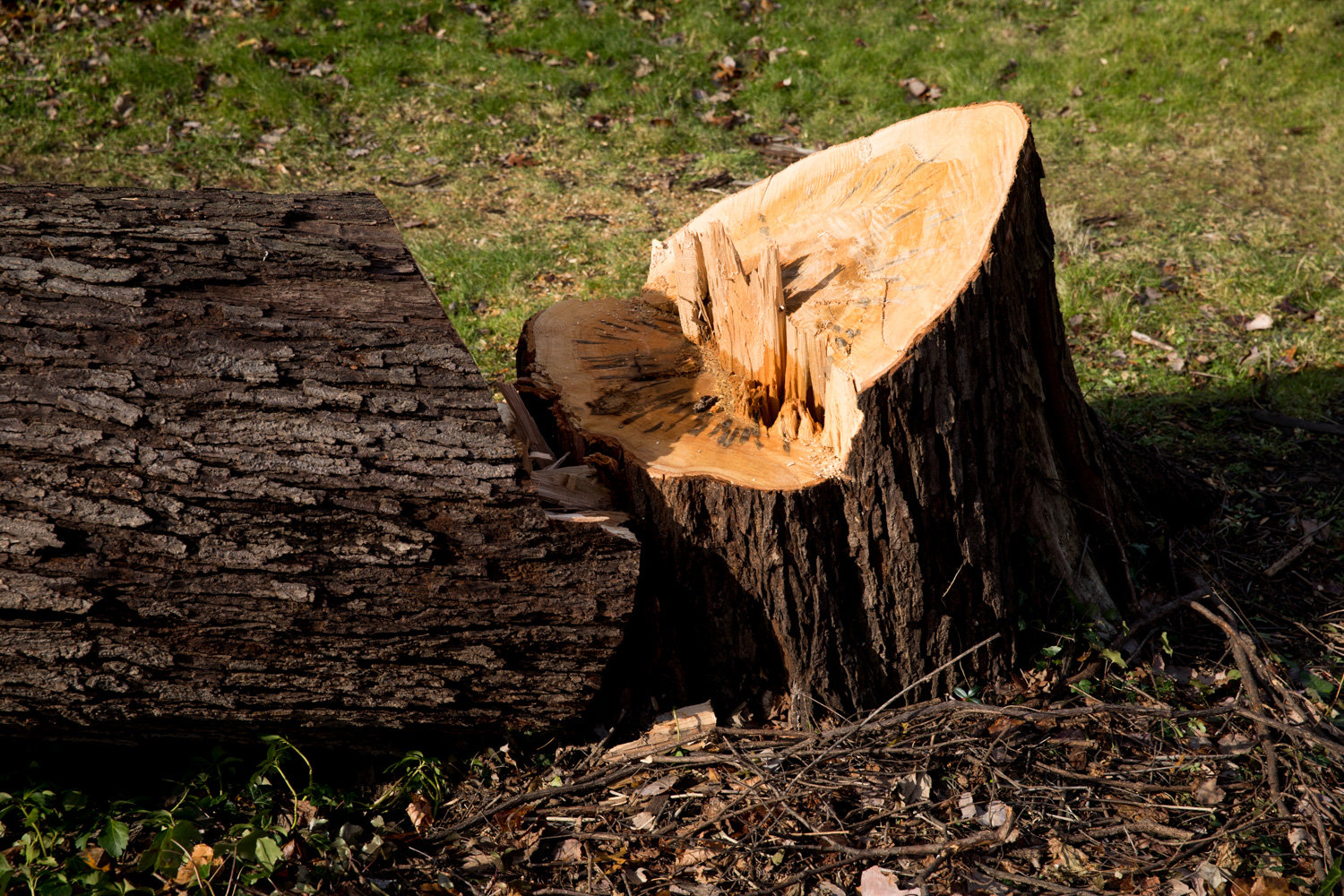 A tree was cut down within the Special Natural Area District near the corner of West 231st Street and Independence Avenue, and no one knows who is responsible. Some community members are up in arms over the arboreal whodunit.
JULIUS CONSTANTINE MOTAL 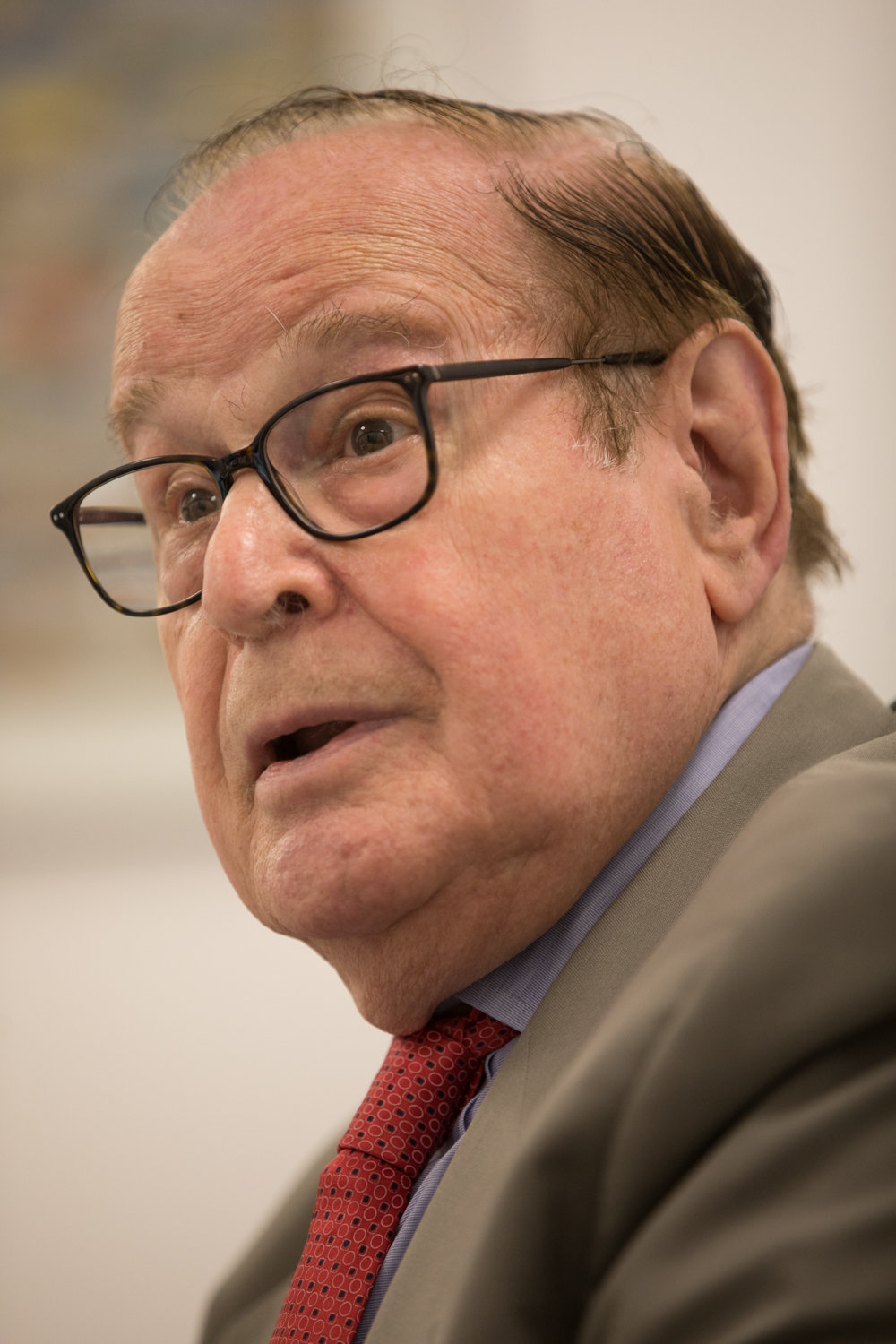 Community Board 8 land use chair Charles Moerdler feels that Schervier Rehabilitation and Nursing Center’s license to operate should be revoked after it was discovered that a SNAD-protected tree on the property owned by its holding company, TL Sheva Holdings, was cut down against local conservation regulations.
JULIUS CONSTANTINE MOTAL / File 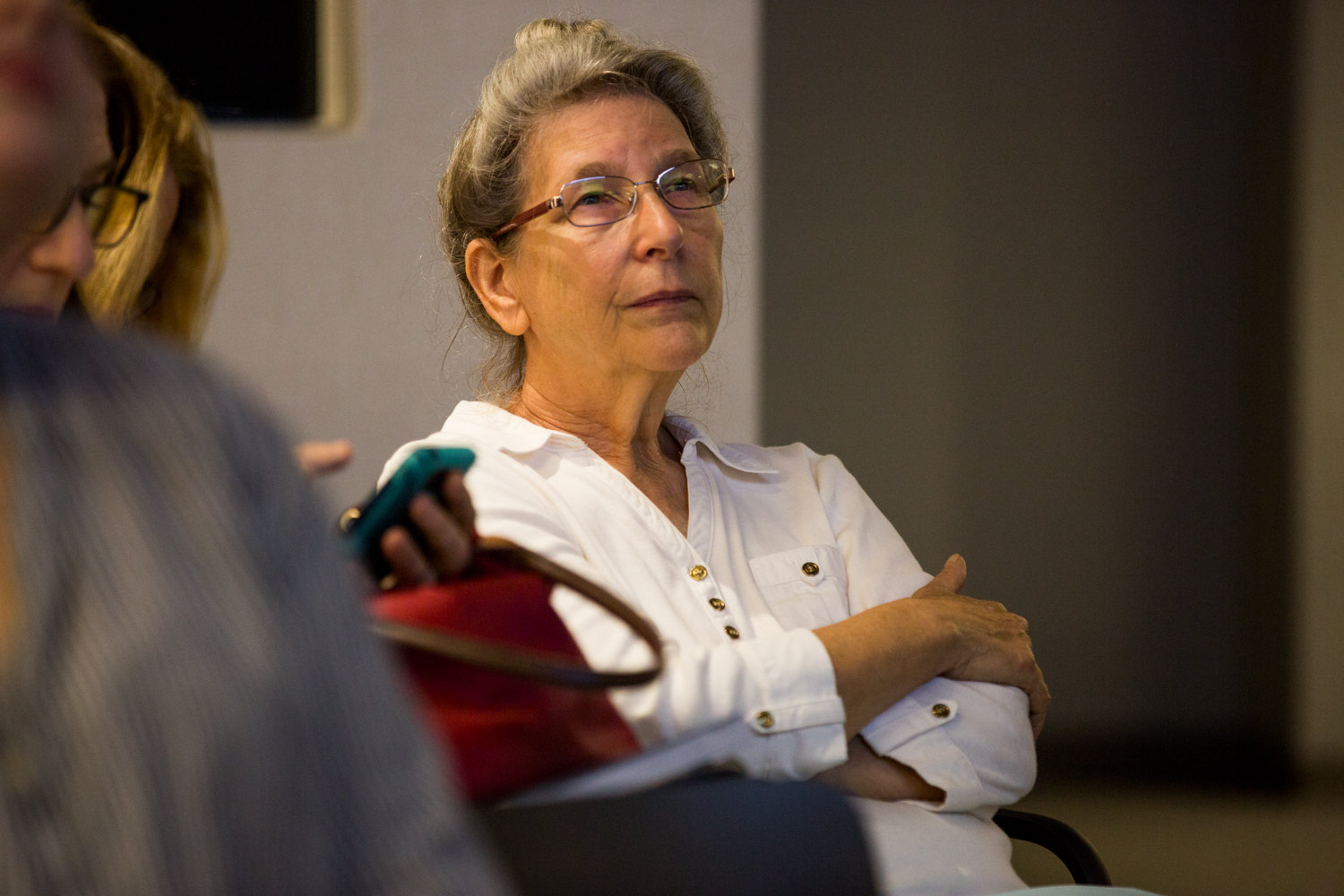 Local horticulture enthusiast Sura Jeselsohn feels that something precious has been lost with the felling of a tree against regulations in the Special Natural Area District near the corner of West 231st Street and Independence Avenue.
JULIUS CONSTANTINE MOTAL / File
Previous Next
By HEATHER J. SMITH

When men with heavy equipment showed up in the parking lot of 714 W. 231st St., earlier this month, neighbors became wary.

After all, the neighborhood lies within the Special Natural Area District. Most modifications to buildings and grounds must be cleared with the city before work begins — even if it’s a single, 6-inch diameter tree.

The lot has something in common with its neighbor at 2975 Independence Ave., Schervier Rehabilitation and Nursing Center: Both are owned by Brooklyn-based TL Sheva Management. The lot is used for Schervier employee parking.

At first, it appeared to neighbor Sura Jeselsohn the crews were just cleaning up the weeds and vines and wouldn’t touch the group of mature trees bordering the lot on one side. She called the property owners and reminded them of the SNAD restrictions. They assured her the workers were just clearing underbrush.

“I was cautious,” she said. “I figured they were up to something, but until they took down a tree, there was never anything to challenge them on.”

Then early Nov. 19, workers broke out the chainsaws. They made short work of the seven or eight trees. But before they felled the last one, the neighborhood responded.

A flurry of 311 complaints got the attention of the city’s buildings department. A DOB inspector showed up at Jeselsohn’s door. She pointed him to the lot a few yards away where work crews were feeding logs into a wood chipper.

The inspector intervened just before the last tree joined its companions lying on the ground. He issued the workers a violation for non-permitted tree cutting along with a summons to appear at a DOB hearing in January.

“When the inspector got out there, there was one tree left,” said Charles Moerdler, chair of Community Board 8’s land use committee. “The inspector said, ‘I’m giving you a violation for having violated SNAD for tree removal without a permit. And don’t you dare touch that remaining tree.’”

Neighbors thought the inspector’s intervention was enough to make the workers put the chainsaws down and leave. But when the inspector left, the saws were fired up again.

A neighbor, watching in horror as the last tree was felled, called Jeselsohn, who in turn flew out her front door. The 65-year-old tree was no more.

“I went over there and screamed at them to leave before they cut the tree up and destroyed the evidence,” she said.

“I told Sura I’m just going to come out there and meet you because I want to take pictures and record this for myself,” Gannon said.

Lying on the ground was a “humongous” tree, with no one to question about who was responsible. Gannon tried calling the landscaping company, but said they denied knowing anything about it.

The inspector’s investigation found that the tree removal was illegal under the district’s rules, a DOB spokesman told The Riverdale Press. Civil penalties can range between $1,250 and $6,250.

Gannon relayed news of the tree removal to Moerdler, who wasted no time calling the city’s building and planning departments, as well as the borough buildings commissioner. He wanted something to be done to hold someone accountable.

“I’m going to find out what’s going on here because (Schervier is) regulated by the state health department,” Moerdler said. “I want to know why we should not ask the health department to step in to determine whether or not Schervier’s current management — which is comparatively new — is really fit to be appropriate managers.

But Schervier’s management said the organization simply operates the home, administrator Louis Herzberg said. All he could do is relay neighbor complaints to the owners.

“What I do know is that we had numerous amounts of complaints from neighbors … about dead trees that have fallen on peoples’ cars and they were afraid that it may, God forbid, one day hurt somebody,” Herzberg said.

He referred additional questions to David Katz with TL Sheva Management. Katz did not return calls.

The upstate company that completed the work, Evergreen Landscaping, may also be culpable, Moerdler said. A call to Evergreen general manager David Rottenburg was not returned.

“There are a hell of a lot of people who say, ‘Why are you worried so much about trees? We’ve got a lot of them,’” Moerdler said. “But that’s the beauty of Riverdale. People come here for the green and the quiet, and we try to preserve these areas.”

Although it would be easy to dismiss the upset over some trees, Jeselsohn said there are more ecological consequences to removing them than most people think.

If the landowners replace the 60-year-old felled tree, it will be with smaller trees grown in a nursery and plopped into a hole beside the parking area. A 5-year-old maple won’t have the root system and canopy of the old tree.

“It isn’t the tree trunk and the roots, it’s what it provides,” Jeselsohn said. “Trees provide shade, they provide habitat, and they hold the soil.”

Small birds and squirrels spend most of their lives in trees. Some insects spend their entire life munching on leaves, stalking smaller bugs, or courting a mate. Remove the trees and you remove a home to hundreds of living things.

“You just can’t willy-nilly pull things up and not understand the headache you’re creating,” Jeselsohn said.