A new kind of chemistry discovered at Bronx Science 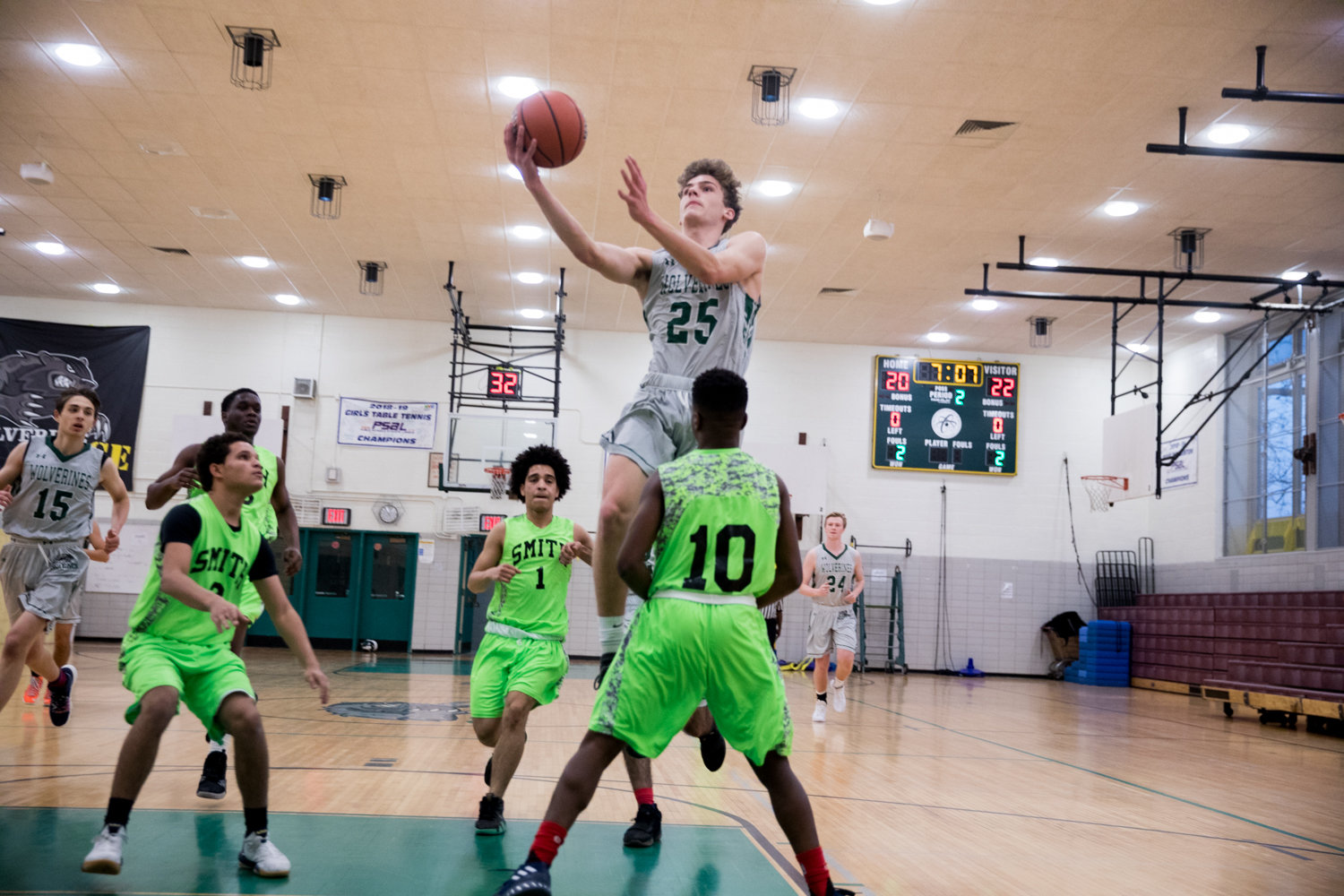 Bronx Science’s Nate Denham soars over a pair of Smith defenders for two of his 15 points in the Wolverines’ 30-point win last week.
JULIUS CONSTANTINE MOTAL 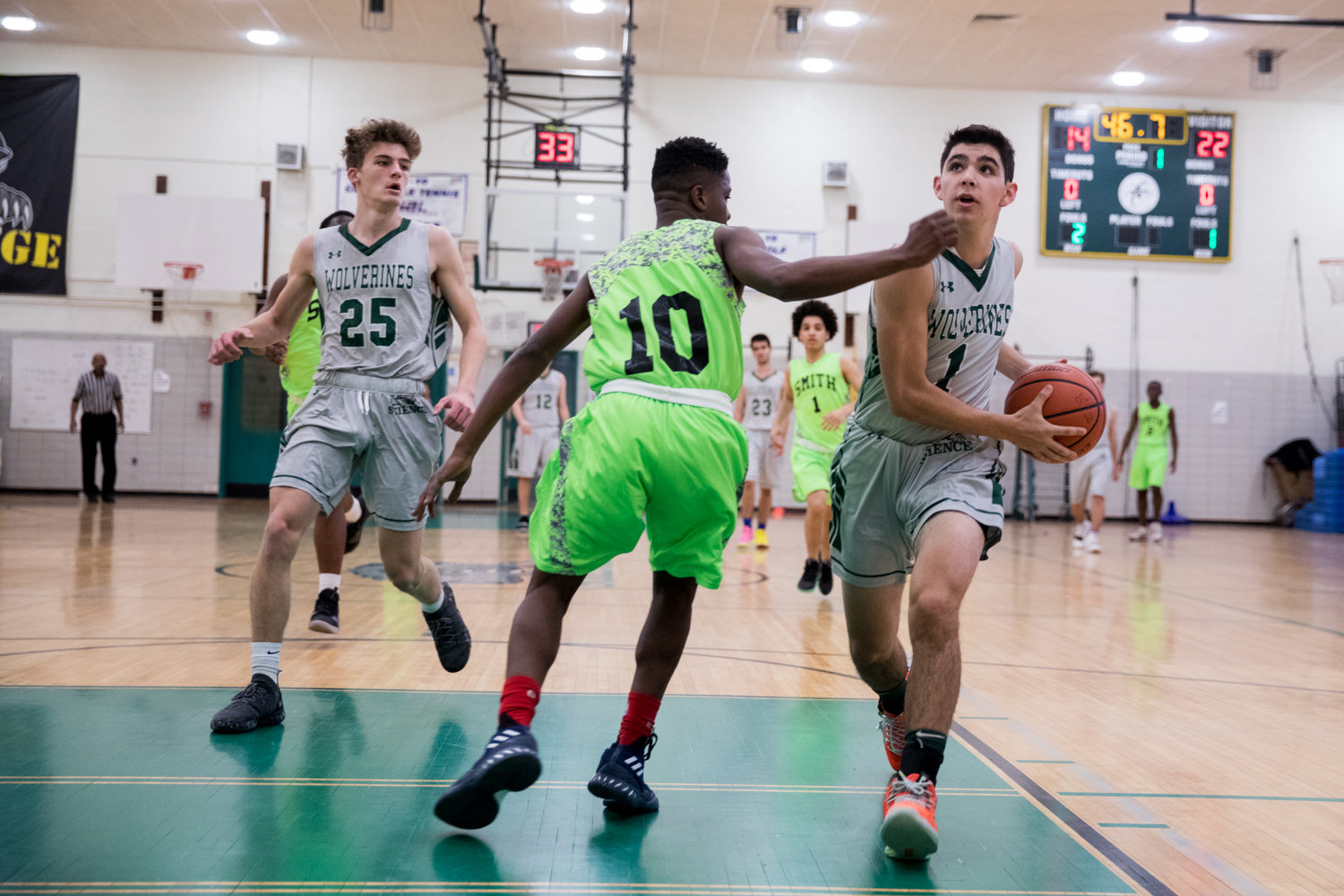 Bronx Science point guard Alex Halpern goes up for two of his team-high 20 points in the Wolverines’ 92-62 victory over Smith.
JULIUS CONSTANTINE MOTAL
Previous Next
By SEAN BRENNAN

Bronx Science looked to be in trouble earlier this season.

The Wolverines were coming off a forgettable five-win, last-place finish the year before, and opened this season with a one-point loss to Longwood Prep. And when they found themselves sitting with a 2-3 record after back-to-back home losses to KIPP and Clinton in early December, it appeared Science’s ship could be sinking again.

But a little chemistry lesson has turned a dicey start into what could be a special season for the Wolverines. Chemistry and Science. A perfect match, no?

“At the end of last season and coming into this season, we talked about needing to play together more, to have better chemistry,” Science head coach Bart Allen said. “So there’s this fall league, the 92nd Street Y league, and they took it upon themselves to join and play together. I think we had two teams in that league, so there was this focus on gelling as a team in September and October.”

And since that initial bumpy start to the season, the Wolverines have been getting straight-A’s in chemistry. The latest example came last Friday when Science overcame an early 10-point hole before blowing by Alfred E. Smith en route to a 92-62 victory.

The win was the 10th straight for the Wolverines, who are now 12-3 on the season.

Science, which already has clinched the Bronx A Northwest Division championship, has not lost since that Clinton game back on Dec. 7.

“I think last year’s team didn’t gel as well,” Allen said. “I think this year the kids have kind of bought in more. They understand that they don’t need to do it by themselves. Last year I thought there was a lot of ‘I have to do this, I have to do that.’ This year, though, everyone does a little bit. If we need a rebound, you rebound. If we need a steal, you get a steal. And it’s been working for us.”

Contributions came from all over the roster in the victory over Smith. Point guard Alex Halpern poured in 20 points. Nate Denham logged a double-double with 15 points and 10 rebounds. Kyle Catry netted 16 points with eight boards. Jason Bohner contributed 12 points with seven rebounds. And the duo of Dylan Contreras and Akaash Sharma pulled down five rebounds a piece.

Everyone did their part in a dominating Wolverines performance.

And Denham points to the Wolverines’ time in the Y fall league with helping turn the program around.

“I think we have pretty good chemistry because of that,” Denham said. “We’ve been playing together for a year now, and I think playing in that league helped build our chemistry.”

Another ingredient to this year’s success, Allen said, has been a deeper and more versatile roster.

“Nate’s been on the varsity since he was a freshman, and this year I think he is fully reaching his potential,” Allen said. “He and Alex together are very good. And I feel like Jason Bohner, who is a senior, is having a good season, too. Jason has had a game this year where he’s scored 20.

“So we have at least three kids who are capable of scoring 20 points a game, and everyone else has understood their roles. They are now just a stronger team, 15 kids together.”

An example of that togetherness came late in the game when Will Nacos, a senior reserve, scored off a rebound. The play brought the entire Bronx Science bench to its feet. And when Nacos scored again with 23 seconds to play, the bench only got louder.

“Will’s a jokester and we just wanted him to score,” Denham said. “Those were his first points of the season.”

Science returns to the court Jan. 28 with just three games left in the regular season before the playoffs commence in February. And both Allen and Denham think this Wolverines team has the goods for a long postseason run.

“We’re pretty confident,” Denham added. “We definitely think we can do some damage in the playoffs this year.”

Harari, Hondorf hope for one more day as team

Science season over, but promising ‘21 looms

Bronx Science’s Gu ‘dives’ his way to the top