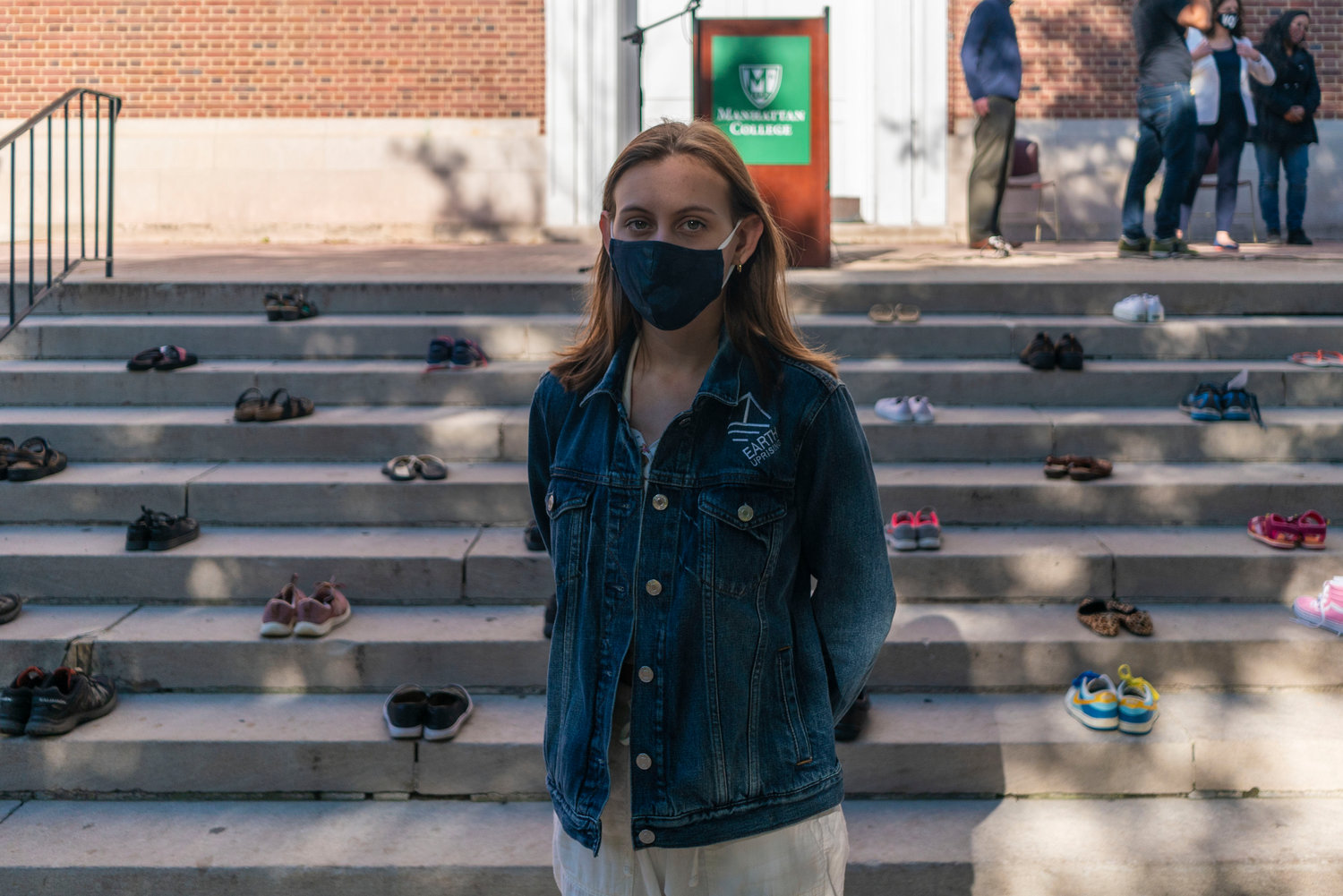 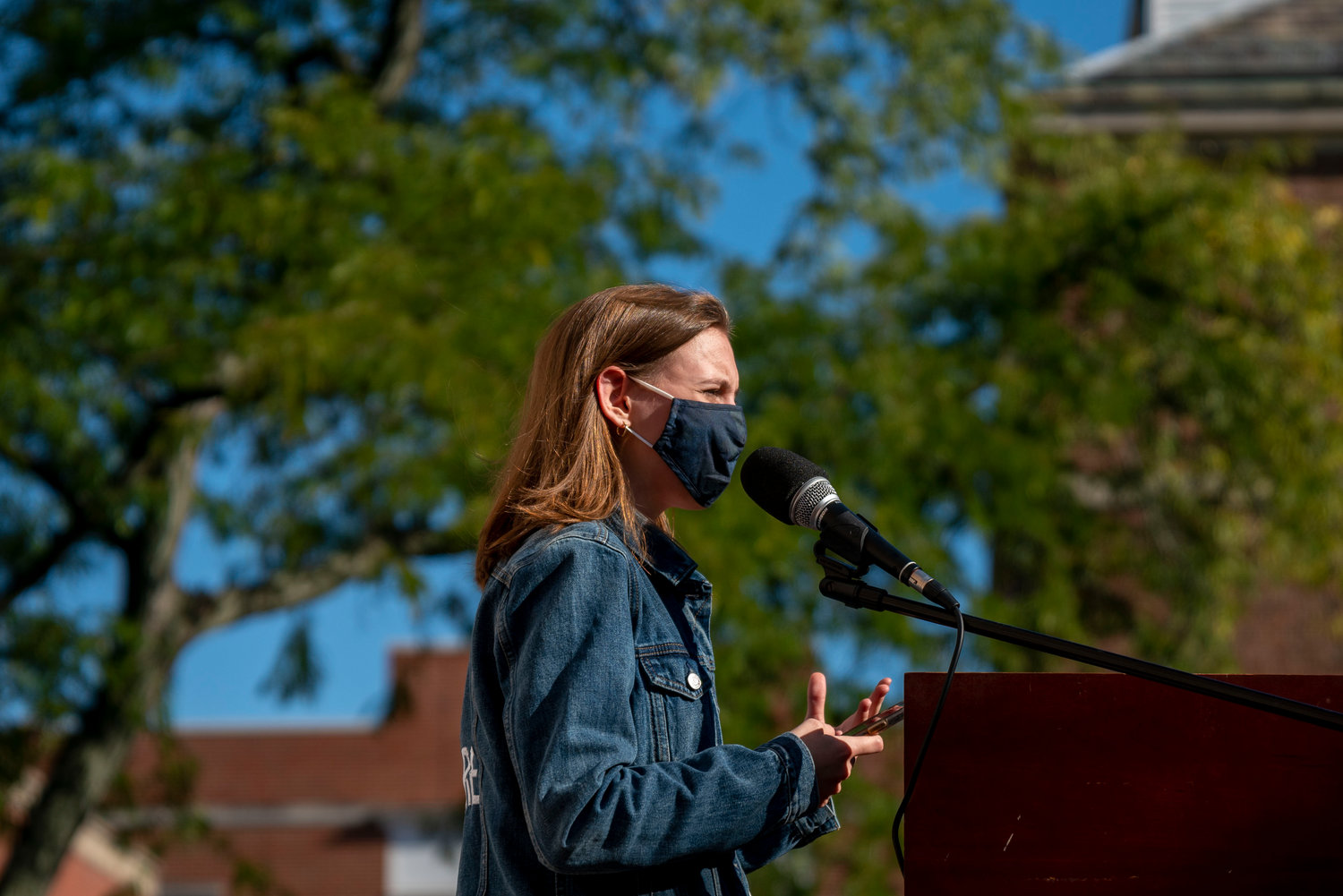 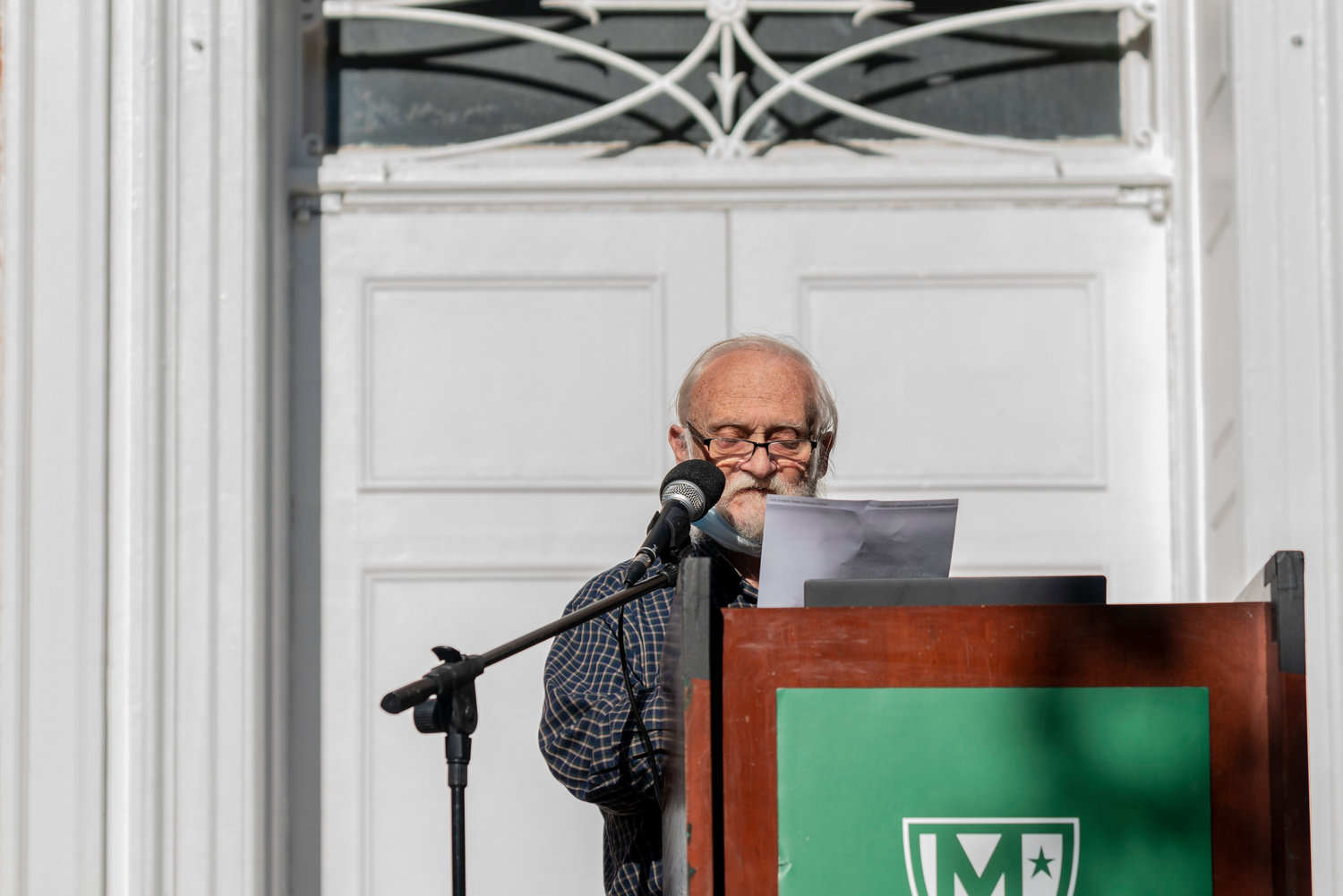 Jim White’s speech at Manhattan College’s ‘shoe strike’ Sept. 22 was a bit unorthodox. He favored a ‘call-and-response’ rhetoric for his remarks, as opposed to a typical one-sided speech.
HIRAM ALEJANDRO DURÁN 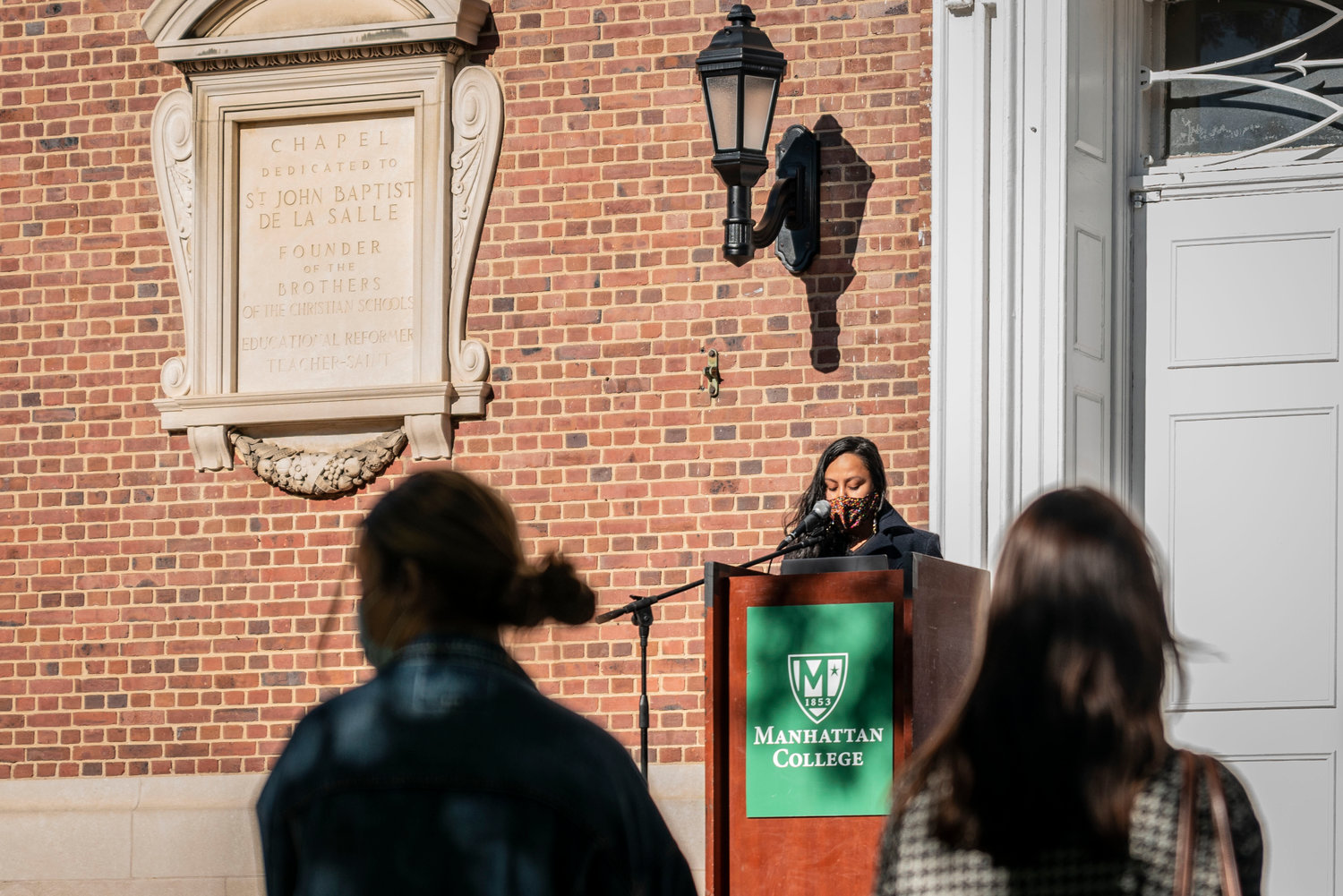 Consuelo Hernandez’s climate activism is largely local. She oversees the composting program at the Episcopal Church of the Mediator on West 231st Street, and was one of several speakers at Manhattan College’s ‘shoe strike’ Sept. 22.
HIRAM ALEJANDRO DURÁN 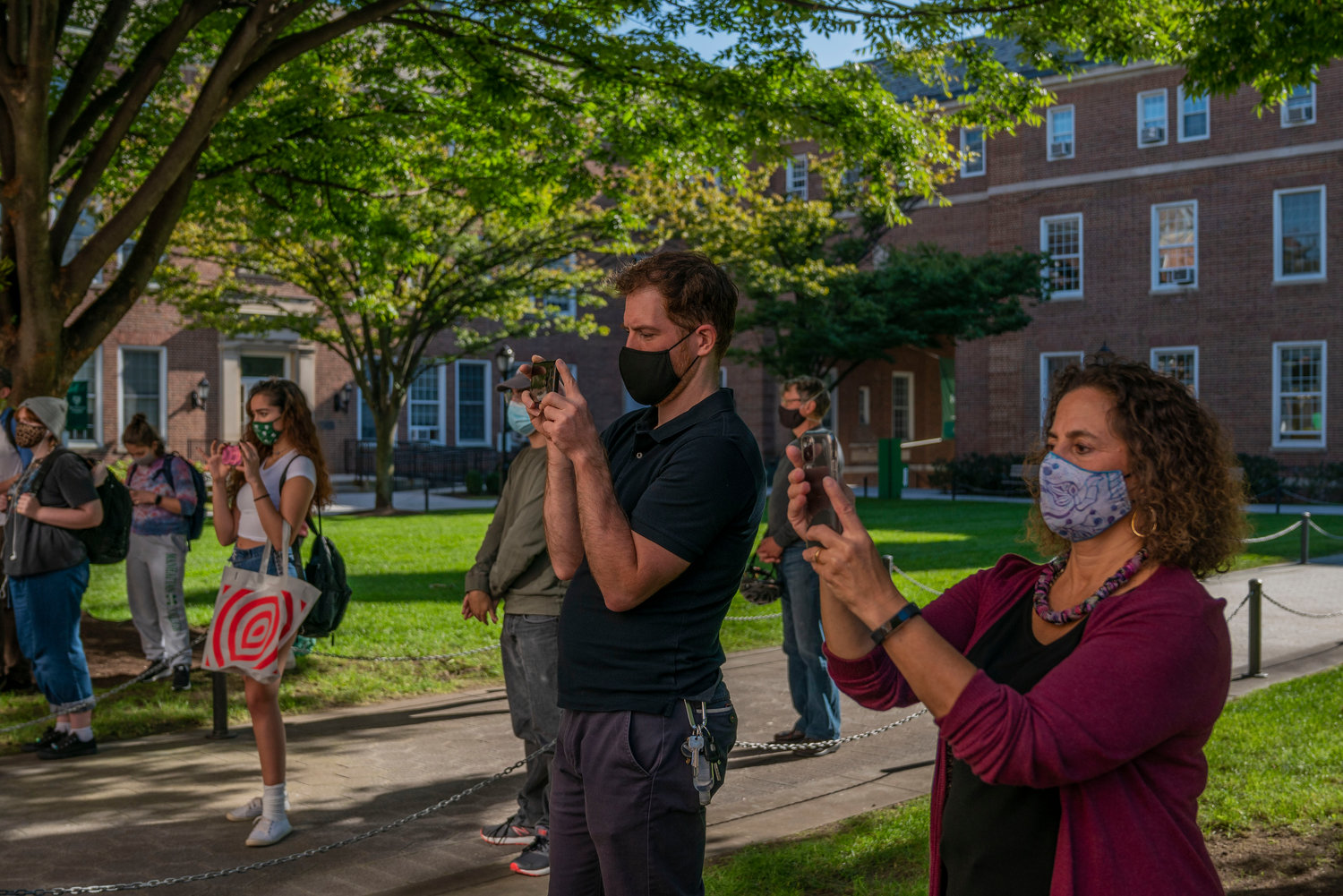 In keeping with Manhattan College’s hybrid learning model, students could attend and participate in the school’s ‘shoe strike’ either in-person or remotely.
HIRAM ALEJANDRO DURÁN 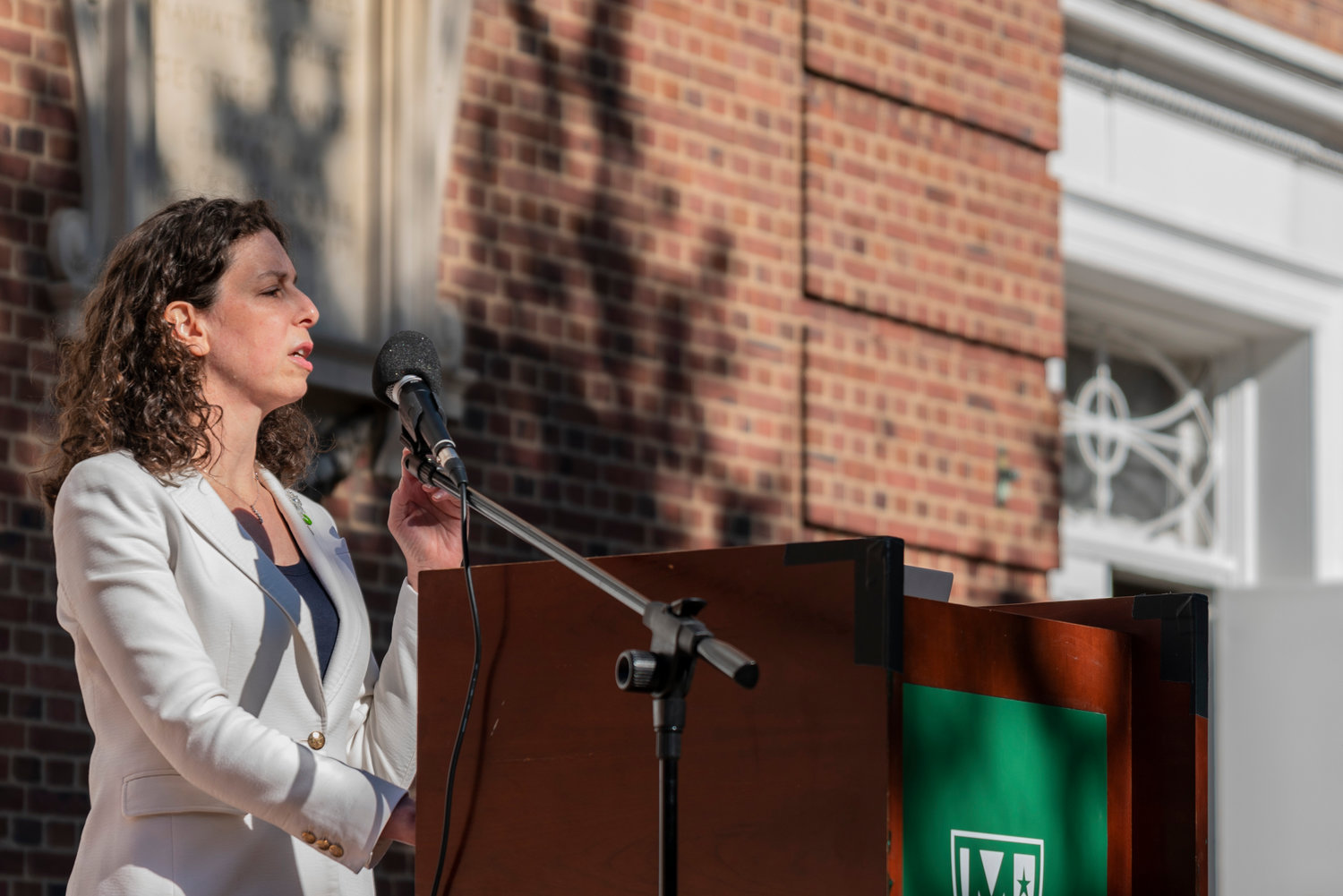 Before she was a city council candidate, Jessica Haller was a climate activist. In fact, she still is. Haller was one of several speakers invited to Manhattan College’s ‘shoe strike’ Sept. 22 to speak about climate change and its impact on the world.
HIRAM ALEJANDRO DURÁN 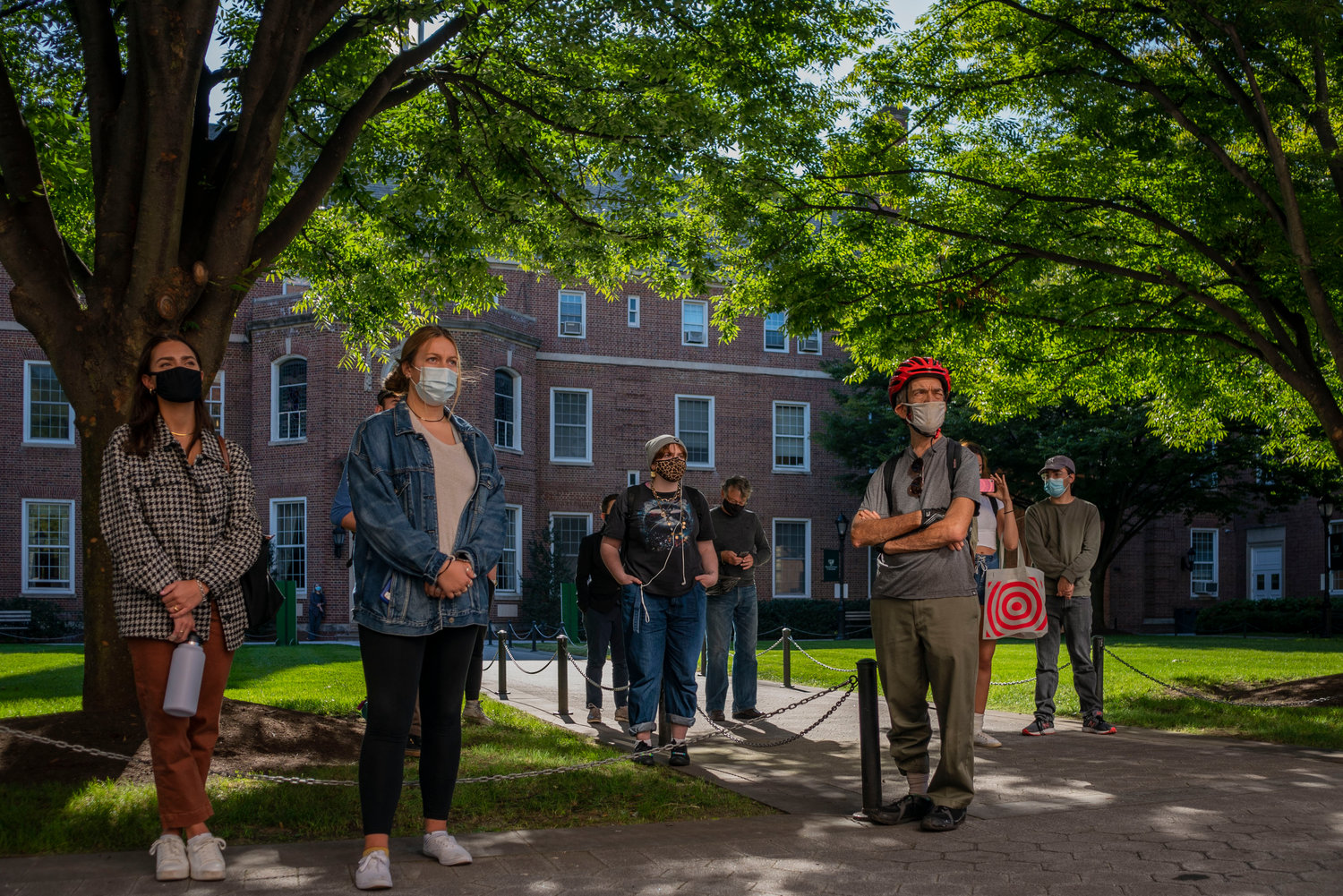 Although they also had the option to attend remotely, a small but steady crowd gathered at Manhattan College’s Smith Auditorium for a ‘shoe strike,’ a protest calling for action on climate change.
HIRAM ALEJANDRO DURÁN 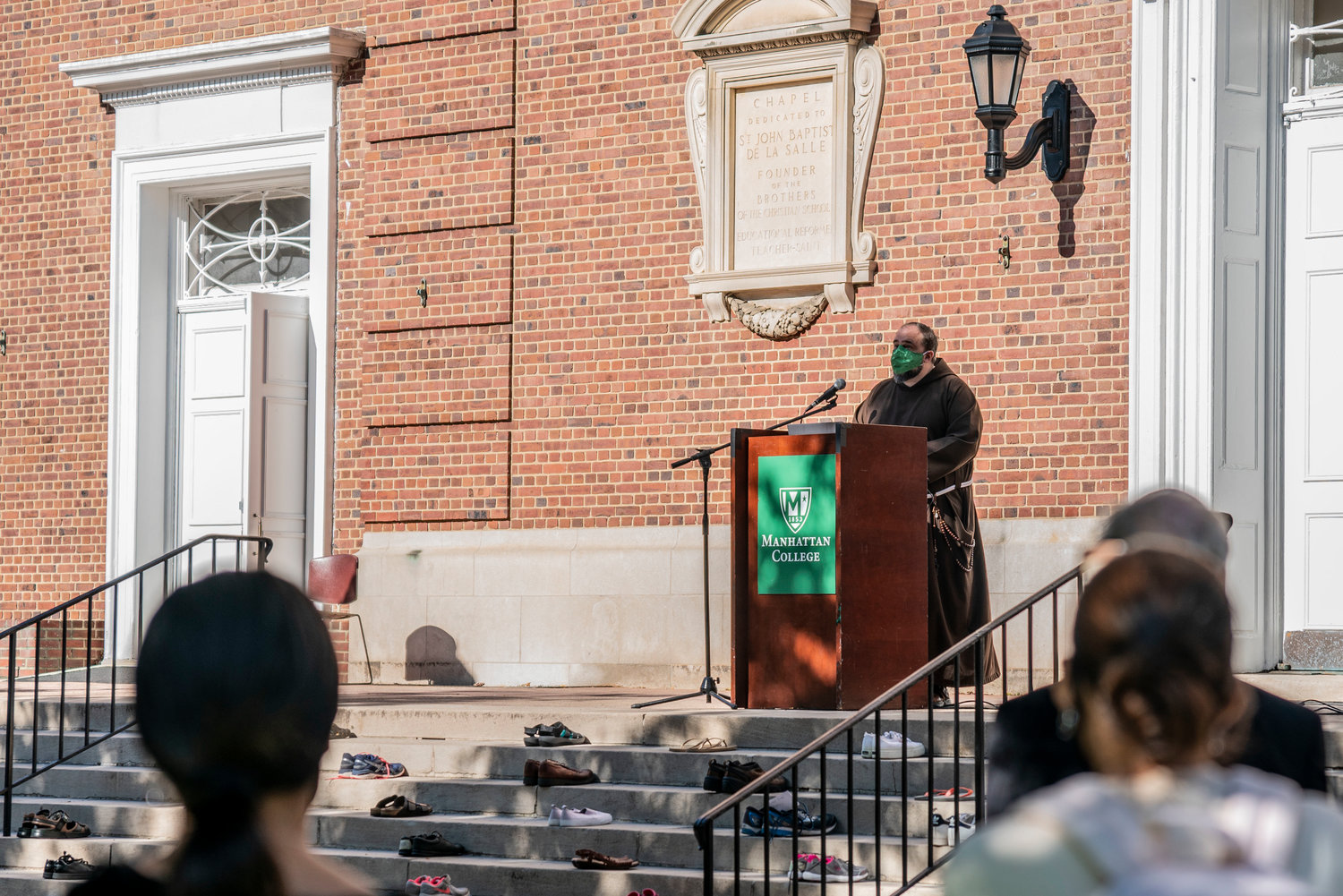 People from across the world last year participated in the Global Climate Strike — a series of protests demanding action on the pressing issue of climate change.

The New York City leg drew some 250,000 protesters where youth climate activist Greta Thunberg spoke. The event was so massive that city public schools granted students an excused absence that day, provided they were attending the strike instead.

But the world was a very different place one year ago.

A packed protest probably isn’t the best idea during a pandemic, which mandates physical distancing. But pandemic or not, climate change is a pressing issue, and it’ll still be one after there’s a SARS-CoV-2 vaccine. And it’s for both situations Manhattan College hosted a “shoe strike” for climate change awareness Sept. 22, allowing people to show up physically — or remotely.

But what is a “shoe strike”? According to Mary Stahl, it’s the social distancing-compliant version of the climate strike the city saw last year. It has the same intentions and sentiments, but participants physically distance from each other, rather than march in hordes.

And yes, there are actually shoes at the strike. Pairs of them were left on the steps of the college’s Smith Auditorium to represent those unable to attend, but whom nevertheless stand in solidarity with the climate strikers.

According to Rachel Roca, the shoe strike was the brain child of several minds across the campus, and planning began a few weeks before the strike itself. Not only was Climate Week NYC — the year’s largest summit on climate action — approaching, but so was the “season of creation,” a time when the Catholic Church seeks to renew humanity’s relationship with all of God’s creation, including the planet. And as a Catholic institution, the college wanted to incorporate both into the event.

Although Stahl is an environmental studies major, her involvement in the shoe strike largely occurred in another capacity. She runs the school’s environmental newsletter, which she said turned out to be an excellent way to disseminate information about — and spark interest in — the shoe strike.

Several guest speakers provide their perspectives on climate change at the Smith Auditorium event itself, sharing how such change might manifest locally and nationally. Among them were Jessica Haller, a climate activist-turned-politician, currently running for Andrew Cohen’s city council seat. Her climate work began in 2007, training with former vice president Al Gore and his Climate Reality Project. After that, she began speaking about local issues of climate change — something that would continue for years to come.

The original climate focus was largely on the science behind it, Haller said. But that’s shifted to a focus on “climate justice” in more recent years.

“It’s interesting to watch the conversation shift,” Haller said. “It’s abundantly clear that we’re talking about people — not just the scientific fact that this is happening, but what are the impacts on the people, and which people are impacted the most?”

Other speakers had a more national stage. The college also hosted 15-year-old Alexandria Villaseñor, a co-founder of the U.S. Youth Climate Strike and the founder of Earth Uprising — both youth organizations calling for climate action.

To Stahl, it’s not only important to want action on climate change, but it’s also imperative to hear how the issue is impacting people locally.

“On a college campus, it’s important to show solidarity with the issues happening in our community … outside the gates of Manhattan, and to get local Bronx representatives and climate activists and hear what they have to say and get involved in their efforts,” she said.

The shoe strike coincided with National Voter Registration Day, giving organizers an opportunity to encourage college students to register, especially with a presidential election just around the corner. Those who wanted to were given an application right on the spot.

But advocacy for climate change action doesn’t begin with a strike and end with a vote: It’s a continuous commitment. Prior to the coronavirus pandemic, the college’s peace club started introducing more sustainability initiatives on campus. One of them was providing mugs at the campus dining hall in order to cut down on the paper and plastic waste of disposable cups.

With the onset of the pandemic, however, those reusable mugs have become unusable mugs. Sustainability initiatives like this couldn’t continue at the college, but that doesn’t mean there aren’t feasible changes that can be made on campus.

Stahl is working to introduce a composting program for the school’s biodegradable waste — work she has in common with Consuelo Hernandez, one of the strike’s speakers who is pioneering the Episcopal Church of the Mediator’s composting program.

“She was talking about the right for food, and how individuals have so much power in their choices in food, and how they promote agriculture and sustainability,” Stahl said. “I think that is something that can be influential on campus.”

Some of the work doesn’t need to be brand new, but can expand upon what’s already there. Roca — a math major and co-president of the college’s peace club — thinks Manhattan College could provide more recycling bins on campus even though she doesn’t see the current bins getting much use.

In Roca’s eyes overall, the shoe strike was successful. Yet, she believes the work needs to continue. And it can continue, she said, with the college hosting similar events, whether during a pandemic or not.

“I don’t think (climate change) gets talked about enough,” Roca said. “There are some clubs on campus who deal more specifically with environmental issues, and I’d love to see their voices amplified and recognized by the general community more.”