City shuts down Loeser’s Deli over gas line issues, and it may never reopen 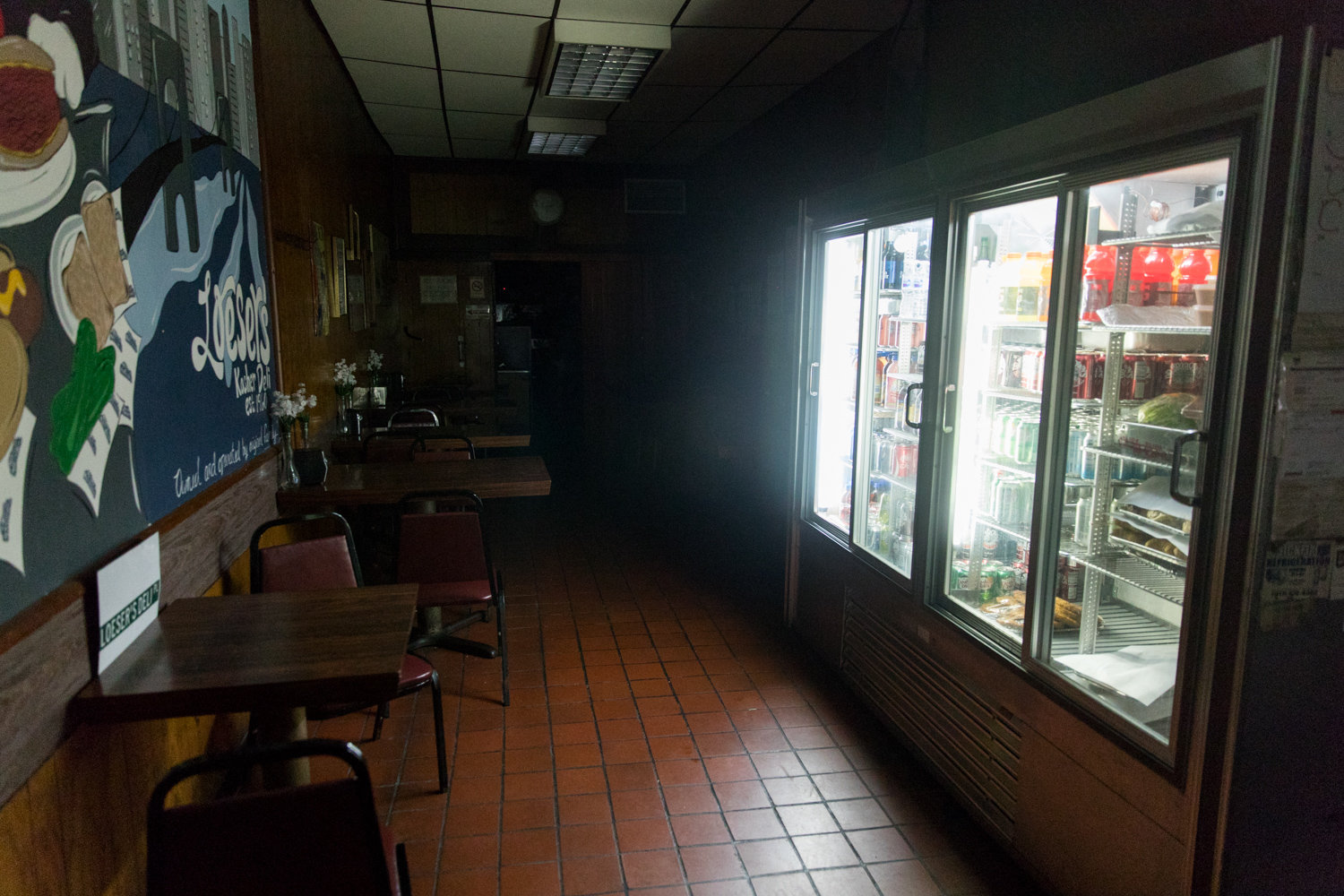 Loeser’s Kosher Deli faces an uncertain future after it was closed down by the city’s buildings department over an old gas line installation. Repairs could cost upward of $100,000, and close the store for months. And Loeser’s is closed now for consecutive days for the first time in its 60 years.
JULIUS CONSTANTINE MOTAL 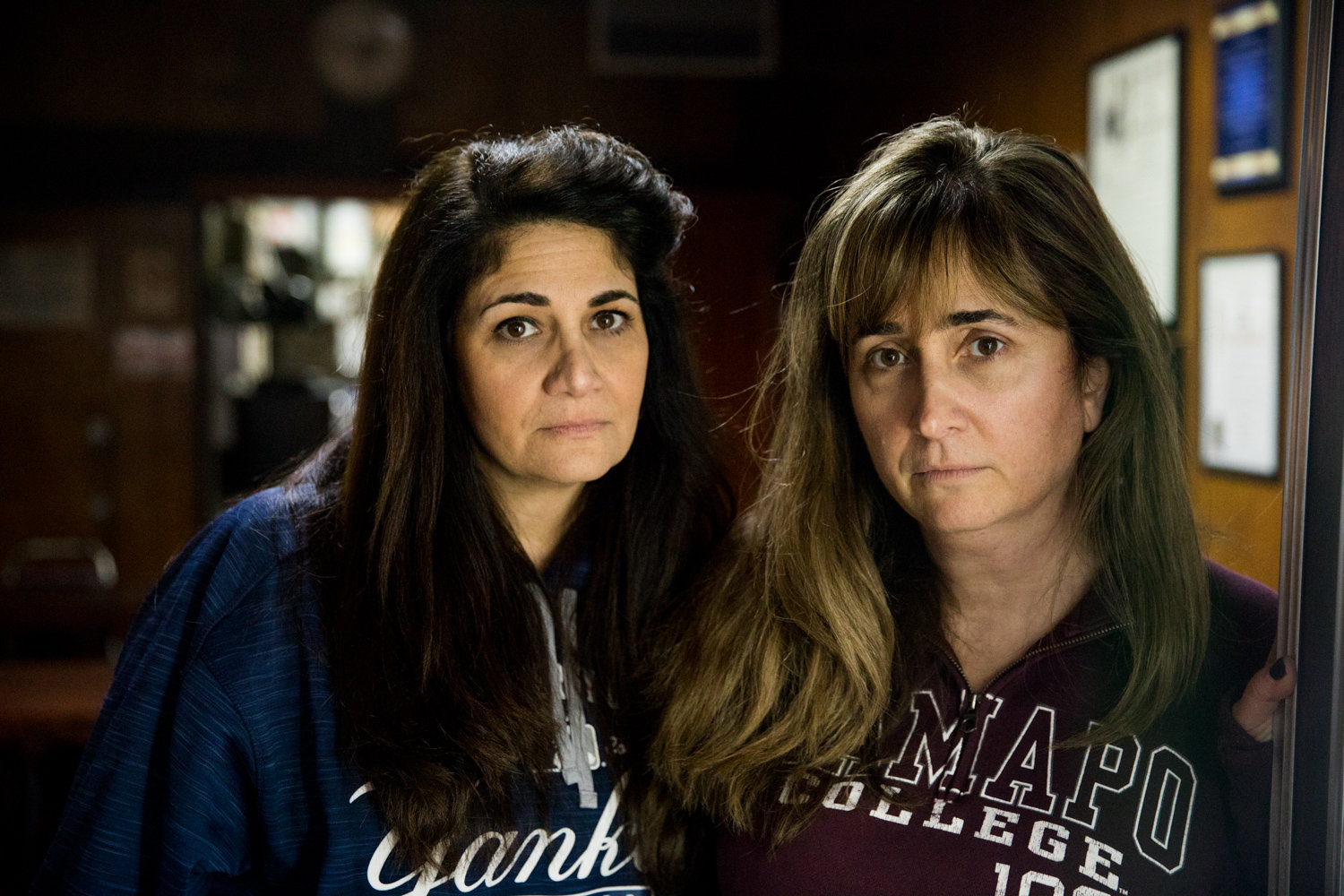 Sisters Lisa Loeser Weiss, left, and Pam Halpern are distraught over the closure of their father’s deli, Loeser’s Kosher Deli, after Con Edison found issues with its decades-old gas line installation. The cost of fixing the problem is upward of $100,000, and the deli is closed — possibly permanently.
JULIUS CONSTANTINE MOTAL 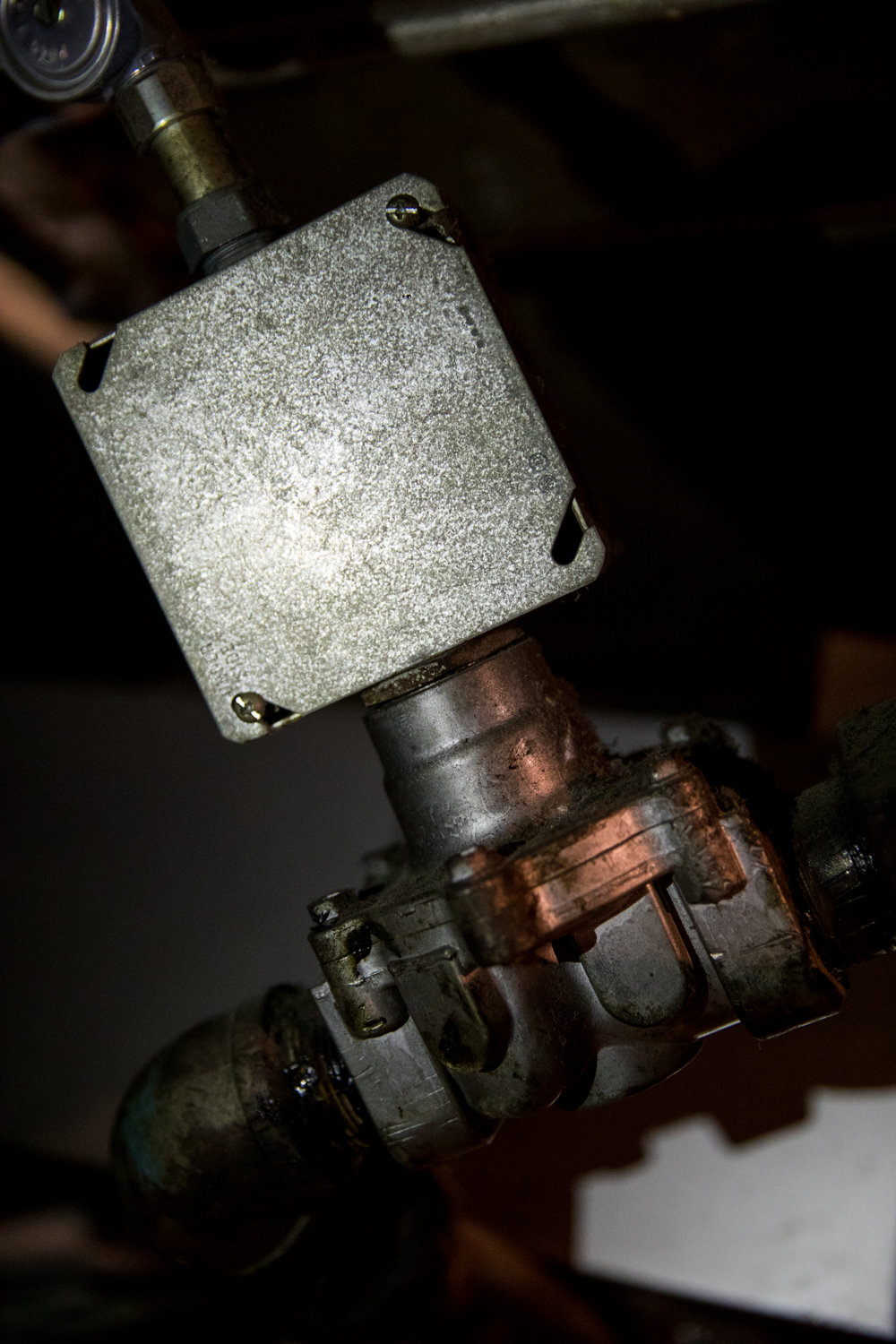 Loeser’s Kosher Deli was shut down, in part, after Con Edison found this box — part of the kitchen’s fire suppression system —was working, but in the wrong place by inches.
JULIUS CONSTANTINE MOTAL 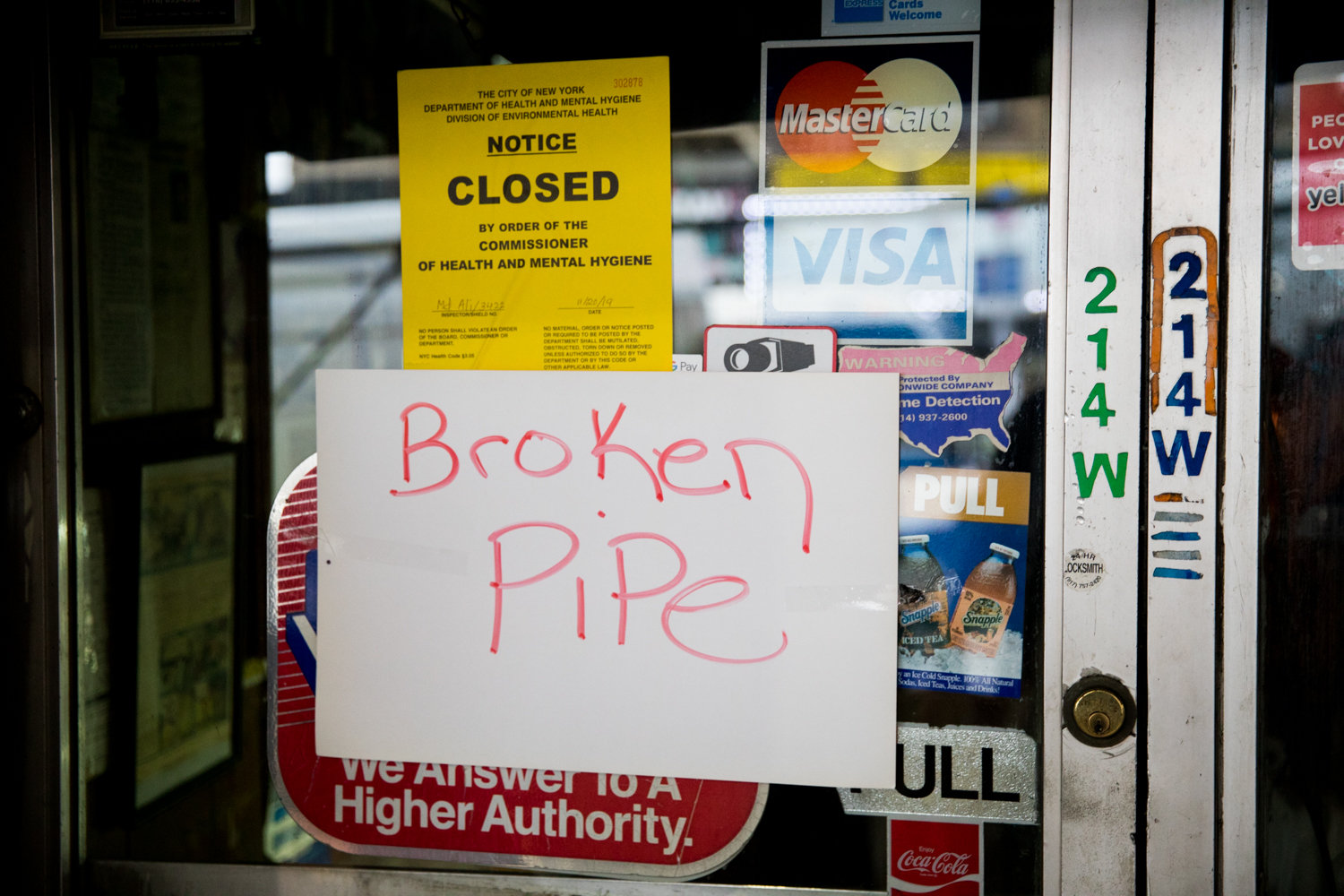 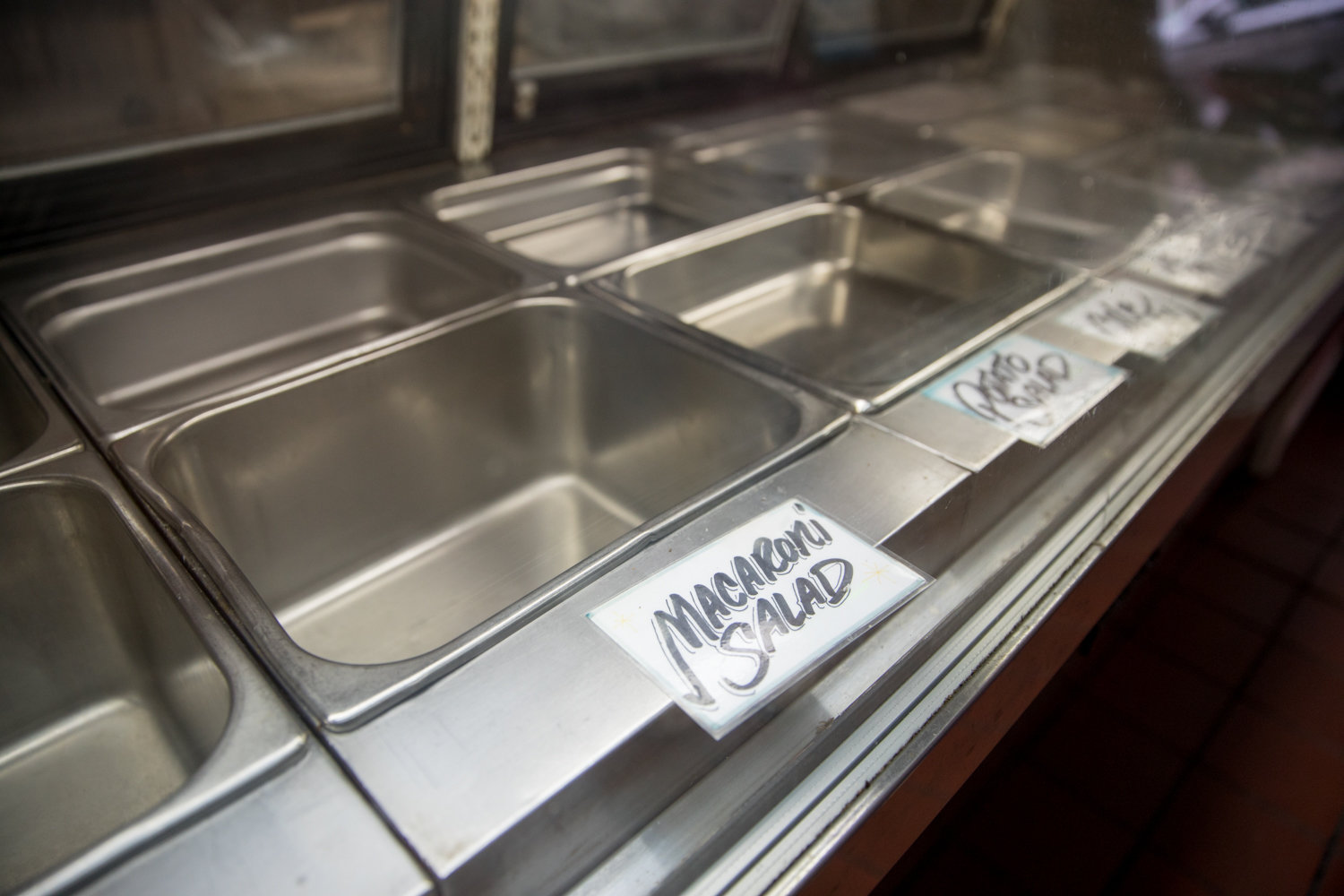 Trays that would normally be full sit empty in Loeser’s Kosher Deli after it was closed down for gas line issues by the city.
JULIUS CONSTANTINE MOTAL
Previous Next
By MICHAEL HINMAN

When Loeser’s Kosher Deli opened in 1960, John F. Kennedy was on the verge of being elected the 35th President of the United States. “The Flintstones” premiered on television, and the first troops were sent to Vietnam.

Over the last 60 years, Loeser’s has survived it all — wars, Sept. 11, the Great Recession, the “burning” Bronx, nearby adult theaters, and 10 more presidents. Even when people didn’t have a lot of money to spend, they knew Fredy Loeser was there on West 231st Street, with a fresh pastrami sandwich — just as he was for their parents and even grandparents.

In the end, it may not be conflict, the economy or even a bad reputation for the borough that finally brings Loeser’s down. Instead, the culprit is New York City, where a gas setup almost as old as the deli itself is no longer kosher to city officials.

The doors to Loeser’s have been closed since last week — the first time it’s ever been closed on consecutive days. And according to Fredy’s daughters — Pam Halpern and Lisa Loeser Weiss — they may never open again.

Not without a miracle, that is.

“My dad loves that deli,” Halpern said. “He started it with his bar mitzvah money, and he built it up with his father. It’s a lot for him to lose, especially since he loves the community so much.”

How things have changed

It was just a month ago local dignitaries gathered the neighboring community for a ceremony renaming the corner of West 231st and Godwin Terrace “Loeser’s Deli Place.” Fredy, who has had some health issues of his own, was there in a wheelchair, surrounded by friends and family, beaming with happiness. He had built a legacy for his children and grandchildren, and it seemed nothing would stop it.

That is until Nov. 14 when the city’s buildings department paid the 212 W. 231st St., eatery a visit. Someone had called 311 complaining about illegal gas work — not at Loeser’s, but at an eatery in the same building, Bunny Deli’s Cold Cut City.

Inspectors visited Cold Cut City and issued four violations, according to the buildings department, primarily for what officials said was new gas piping found in the basement — installed without permits and inspections.

Because they share the same address, inspectors then turned their eye to the other deli nearby. They walked into Loeser’s unannounced, and headed straight for the basement. There were no new pipes installed there, but inspectors didn’t like what they found from the decades-old setup. They cited Loeser’s with one violation — failure to maintain the building in a code-compliant manner — and then ordered Con Edison to cut gas to the business.

That shut down everything, from burners to the hot water tank, which is essential to stay open in New York City.

The family scrambled, and kept the deli open with a limited menu, boiling all the water they needed on electric ranges. But that was not enough for the city’s health department, which shut Loeser’s down for good last week because it didn’t have a working hot water tank.

“From a company standpoint, our main priority is safety,” a ConEd spokesman told The Riverdale Press. “Not just for the residents and the building owner, but the surrounding neighbors as well.”

Natural gas explosions are all too common in New York City, which depends on the resource for everything from cooking to heating. But little if anything has changed in how Loeser’s has operated its gas setup over the years, Pam Halpern said. One of the violations involves the placement of an Ansul valve installed many years before, used as part of the fire suppression system over the deli’s burners. It works, but it’s located less than two feet from where officials say it should be.

Bringing Loeser’s up to date? That’s a project costing at least $100,000, and would require the deli to be shut down for at least three months — two things, Halpern said, the Loeser family simply can’t afford.

“We’re the ones that ultimately got turned off,” she said. “I have no problem if they had come to us and told us, ‘This is the situation,’ and then worked with us to fix it while still allowing us to remain open. But they didn’t do that.”

Even worse, Halpern says that because Loeser’s gas setup dates back to the 1960s, it could have been grandfathered in. But once DOB ordered the gas shut off, grandfathering was no longer an option.

“It should have been grandfathered in,” she said. “But as soon as the gas goes off, then grandpa goes out the window.”

That’s not exactly true, however, says buildings department spokesman Andrew Rudansky. None of the violations inspectors found would have been grandfathered from a previous code.

The question is what to do now. Loeser’s is closed, right when many in the community look for the eatery the most — Thanksgiving.

“We had already started preparing for the holiday weeks ago, not knowing that within a week’s time, we’d be closed,” Weiss said.

What can anyone do?

Turkeys had been ordered already, including several Fredy typically gives away to those in need. But that can’t happen now, with the deli dark and the front door blocked by the battered security gate that has protected Loeser’s for decades.

“All I can say is it’s a neighborhood institution,” said Katherine Broihier, director of the Kingsbridge Business Improvement District, which Loeser’s Deli is a part of. “You hate to see something like this happen, especially with Fredy’s frail health. But let’s see if we can get something done.”

Loeser’s is even getting some support from elected officials like Bronx borough president Ruben Diaz Jr., and Councilman Andrew Cohen.

“I’m certainly worried about losing a business that’s been here for so long,” Cohen said. “But also, at the end of the day, as loyal as I am to Loeser’s, it’s important that we have safe gas in the community. I don’t want to put anybody’s safety at risk.”

But community help? Their father wouldn’t want that, Fredy’s daughters said, despite how much he has given to his neighborhood over the years. Some longtime patrons have suggested putting together online crowdfunding, but Fredy doesn’t want that.

Yet, the thought of losing his business is devastating the longtime sandwich maker.

“He just keeps saying to me, ‘Pom-Pom, I don’t understand why they won’t just let me fix it,’” Halpern said. “’I’ll do whatever they say. I have to pay all these fines and permits, and they said I still may not be able to open.’

“They didn’t really want to retire. He was still a strong force there, going in every morning and trying to do paperwork. He wasn’t giving it up anytime soon, and he wanted us to continue it with him. But now he’s crying, we’re crying, the grandkids are crying, and we don’t know what to do.”