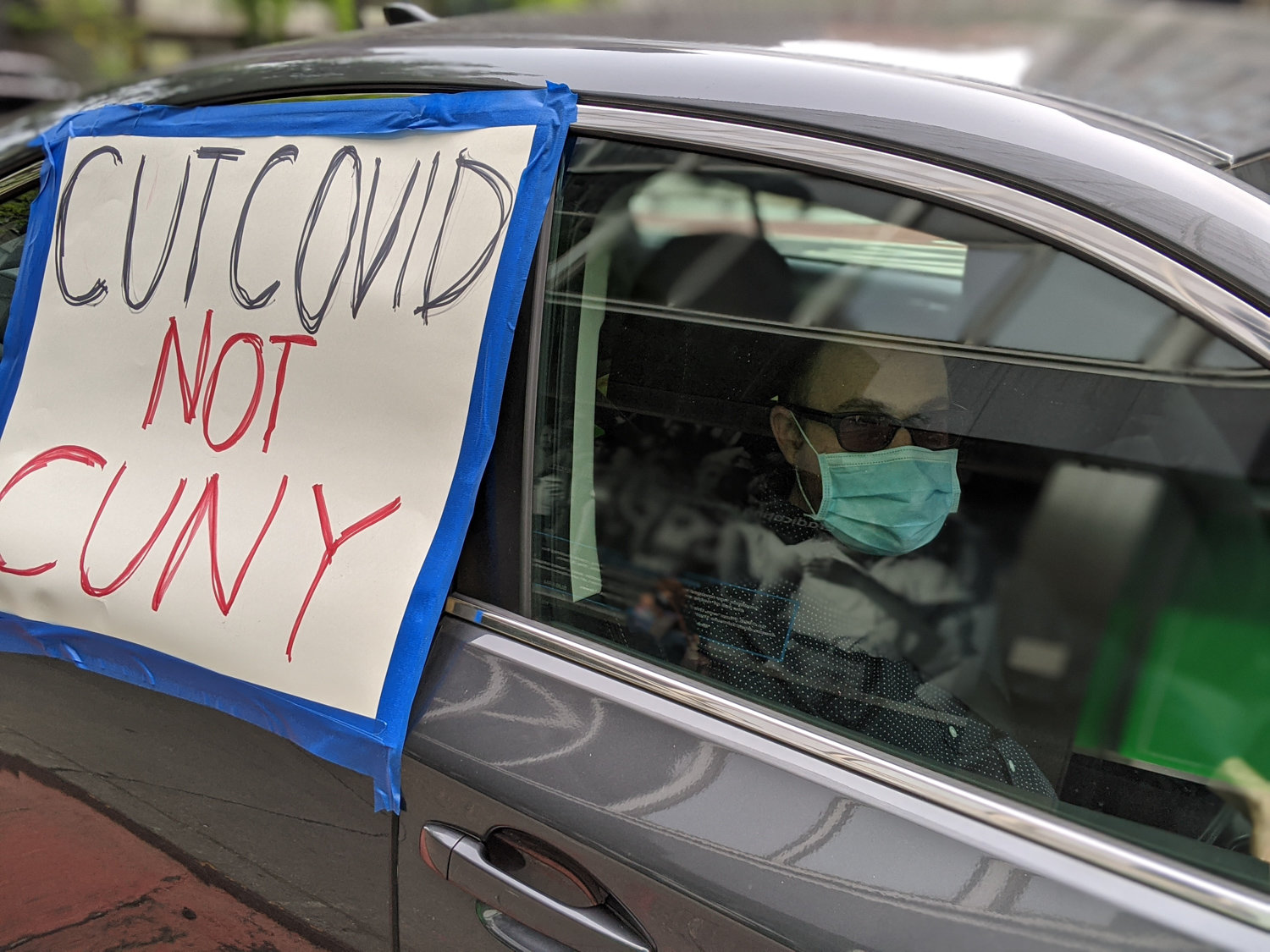 A sign that reads ‘cut COVID not CUNY’ is pasted on the window of a car during a protest organized by members of CUNY’s Professional Staff Congress. It was all in response to layoffs across the public university system — a consequence of the coronavirus pandemic.
Courtesy of Robert Farrell 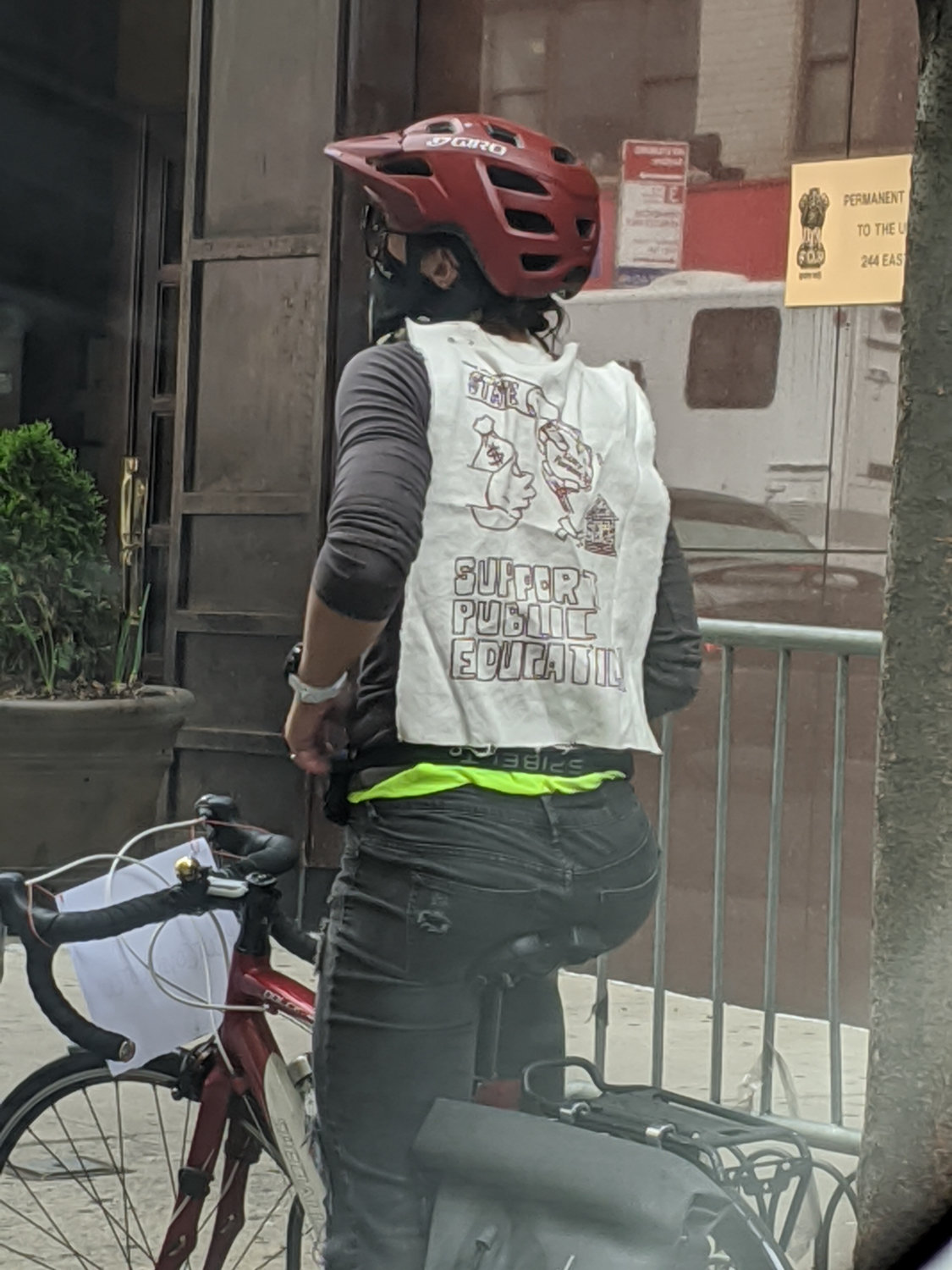 A cyclist wears a sign reading ‘support public education’ during a protest against layoffs at various schools within the CUNY educational system.
Courtesy of Robert Farrell 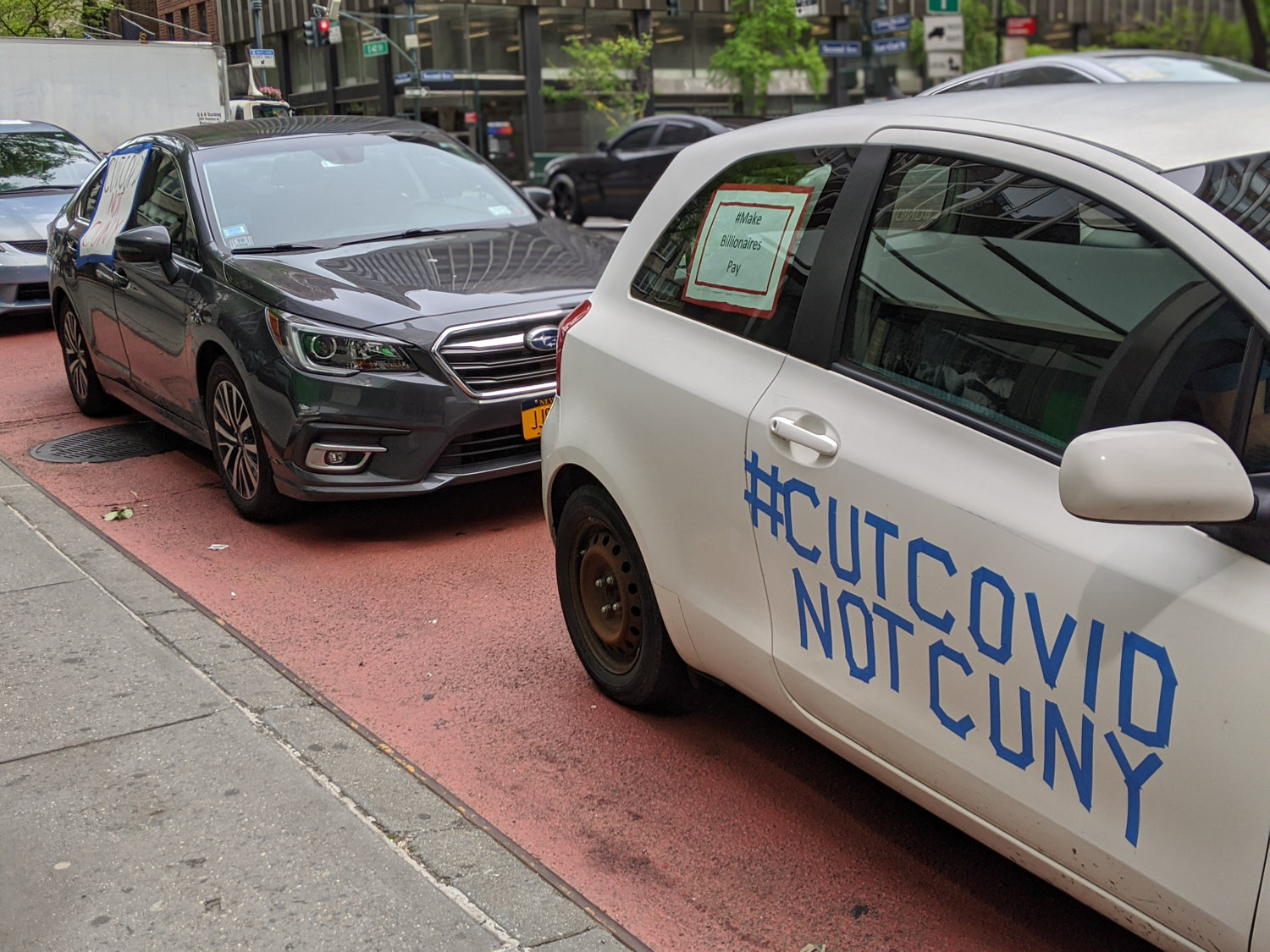 Blue tape pasted on the side of a car reads ‘cut COVID not CUNY’ alongside a sign reading ‘make billionaires pay’ during protests against layoffs at various schools within the CUNY system.
Courtesy of Robert Farrell 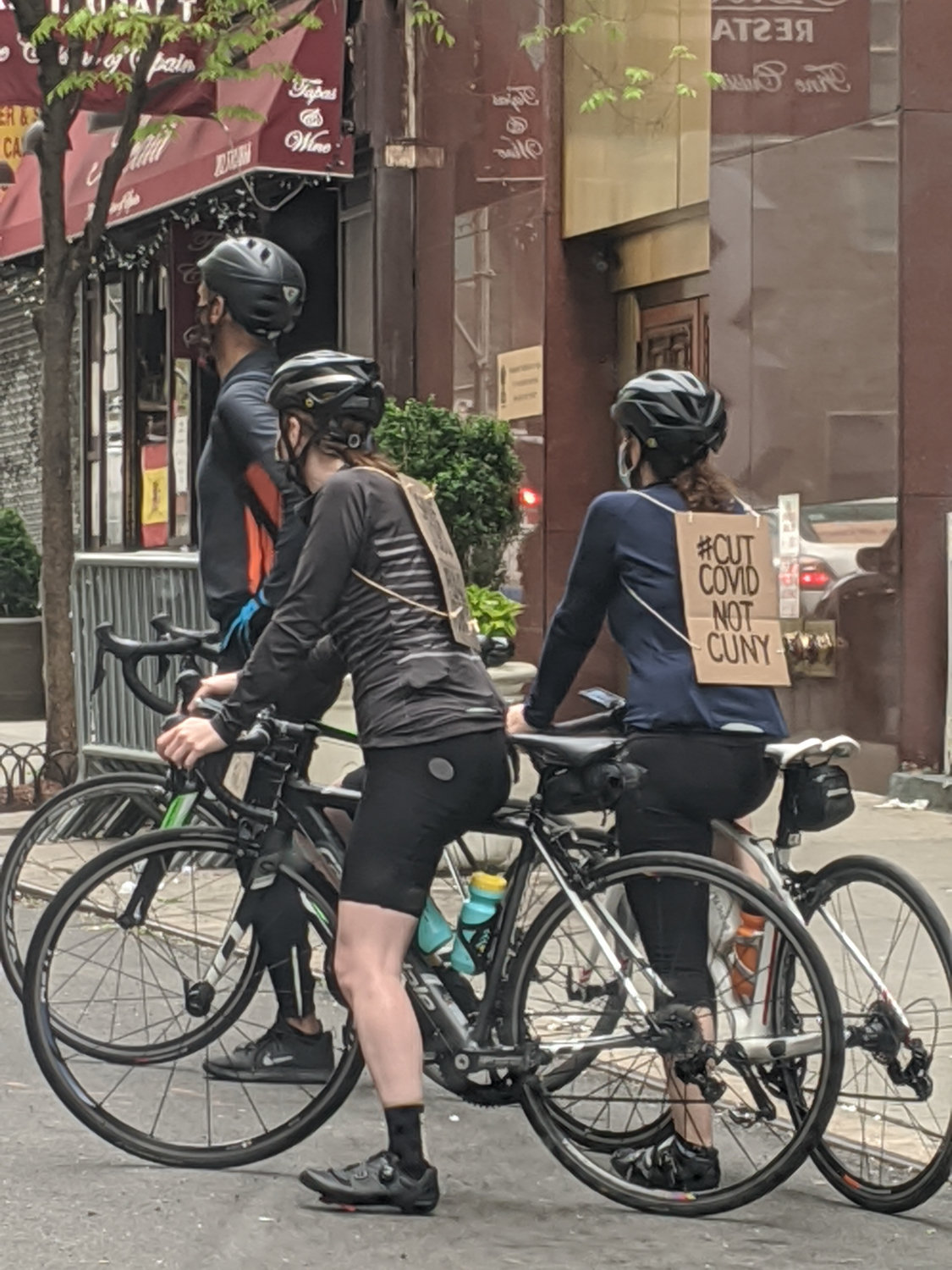 Cyclists wear cardboard signs during a protest against layoffs at various schools within the CUNY system.
Courtesy of Robert Farrell
Previous Next
CUNY protest caravan rolls through

The Professional Staff Congress — the CUNY union that represents more than 30,000 faculty and staff members in the city-run post-secondary school system — took their grievances on the road, protesting budget cuts in Midtown just in time for the system’s board of trustees sat down to consider how it will fund CUNY schools in the fall.

Riding in cars and on bicycles in a socially distanced caravan, they had signs on their windows and backs, circling around CUNY’s central office on East 42nd Street, up to Gov. Andrew Cuomo’s Manhattan office on Third Avenue, and further on into the Upper East Side, where some of the city’s richest families — and even some members of the board of trustees — lived.

Ruth Wangerin, an adjunct professor at Lehman College, was driven by her husband, who beeped the horn quite a bit.

“He said it reminded him of wedding processions he’s been to where all the cars follow along in a train and beep,” she said.

Because of the pandemic, a lot of Midtown was eerily empty, Wangerin said, with few pedestrians and little traffic catching interest of the caravan, sometimes stopping to read signs like “cut COVID, not CUNY” and “support public education.” Some would wave while others would beep their horn in response.

It certainly added to the noise of what had otherwise been a quiet part of the city, the sounds echoing off many of the tall buildings that make up downtown.

Another Lehman adjunct professor, Abigail Mellen, said despite the large number of cars and bikes making up the CUNY caravan, it wasn’t chaotic.

“I didn’t see any drivers getting angry with us,” Mellen said. “And the police were very good.”

Barbara Bowen, who led the caravan of some 80 vehicles and bikes, called the experience “energizing.” She was particularly impressed with the solidarity from those who happened across the group, showing support for the CUNY cause.

“It was an important display of unity,” Bowen said.

In the CUNY board of trustees meeting afterward, chair Bill Thompson acknowledged some 1,000 written testimonies calling for the rejection of any CUNY budget cuts, as well as any plans to lay off adjunct faculty.

For now, at least, Thompson says those words of support are under review.

There’s a lot of talk about how the coronavirus pandemic has hit businesses — but when it comes to schools, outside the fact that campuses are closed, some might be surprised to find out what’s happening inside.

Like the fact some professors are getting the ax at many CUNY schools — including Lehman College — affecting primarily those who are working part-time, or in an adjunct capacity. The layoffs, according to some observers like CUNY Rising Alliance, are coming in anticipation of looming budgets cuts. With New York City joining the rest of the state in being shut down in some way or another since the end of March, collecting tax revenue and other fees hass been challenging for city officials. And less money means budget cuts will have to come somewhere. For CUNY schools, it seems that sacrifice are the teachers who help round out the full-time faculty.

Barbara Bowen president of the Professional Staff Congress union, called on CUNY during a conference call last month to change course from what she described as a lack of vision, courage, imagination and empathy. She emphasized her point by calling back to the Great Depression, when CUNY added three colleges to its institution despite the economic hardships.

“There are alternatives to cutting,” Bowen said. “CUNY should be demanding the full federal stimulus money. We’re talking about people’s lives here.”

Many local and state officials have decried how little federal funds have trickled down to states and municipalities since the coronavirus pandemic wreaked havoc on the nation’s financial infrastructure last spring. Many of the massive funding bills coming from Congress have focused on businesses or individuals, but not on governments.

This has become a regular topic of conversation for Gov. Andrew Cuomo before the George Floyd protests took center stage, pushing for the New York congressional delegation to get money into governments — especially in Albany, where budget deficits are being measured in the billions.

It’s not much different for New York City. Money isn’t coming in, and paying for the vast array of services the government supplies — from sanitation to first responders, like the fire department and police — is becoming more and more difficult. Hard choices must be made, and education in places like CUNY schools could end up with the short end of the stick.

Queens state Sen. Michael Gianaris says CUNY has needed better funding long before the pandemic, and that adjuncts have been tasked with filling the gaps in an underfunded system for years.

In fact, adjuncts teach more than half the classes in the entire CUNY system, he added. If CUNY cut that support system through indiscriminate layoffs of adjunct professors, populating those classes and helping thousands of students earn degrees will be stunted considerably.

“The worst example to set is to allow our public institutions to engage in layoffs and fire,” Gianaris told a recent PSC conference call, “which are going to make this crisis worse for so many.”

Queens Assemblywoman Aravella Simotas added that it is not at all a “stretch” to tax people who earning millions of dollars each year. These are residents who can spare some extra dollars to help keep CUNY funded, instead of watching the stock market tick up the same time unemployment claims do.

“We cannot continue to provide for the ultra-wealthy and not make sure that they paid their fair share in New York state,” Simotas said.

Marie-Michelle Strah, an adjunct professor from John Jay College, cited a U. N. human rights declaration that states every human being is guaranteed the right to a meaningful education. By removing professors through this layoff process, CUNY is taking this right away.

Strah already learned she’s not expected to have a teaching assignment at a CUNY school for the upcoming fall semester, leaving her to worry about not only her students, but also her livelihood.

Strah relies on her job for health insurance, a benefit that is even more vital in the middle of a pandemic.

The Lincoln Square school plans to lay off more than 43 adjunct professors, accounting for nearly 40 percent of its entire teaching force. Lehman College here in the Bronx has yet to disclose any job cuts there.

“I’m very confused by the situation,” said Ruth Wangerin, an adjunct professor from Lehman. There are a lot of questions among Wangerin and her colleagues over whether or not they’ll have a job in the fall. Not knowing what’s going to happen, and following a desire to be ready for whatever comes, some 600 people attended a recent CUNY unemployment workshop.

There were so many people trying to sign on virtually, Wangerin added, multiple videoconferencing platforms had to be deployed to accommodate them all.

Still, as stressful as it might be to think about losing her job, Wangerin finds some solace in the fact that eventually, CUNY colleges would bring everyone back because the schools depend too much on these adjuncts and part-timers leading these classes.

Bowen emphasized how important adjunct professors are to the CUNY system: “They are not disposable.”