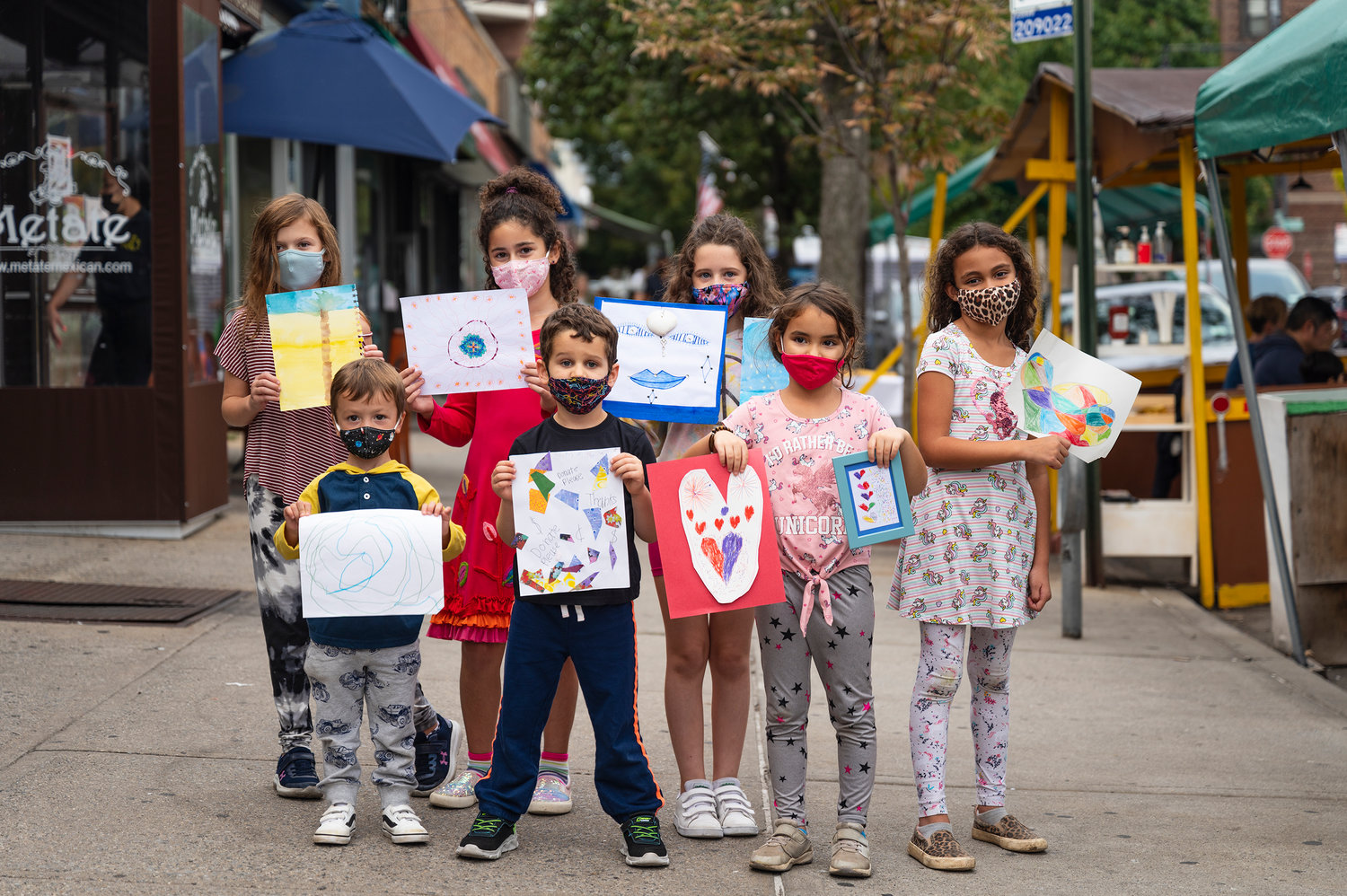 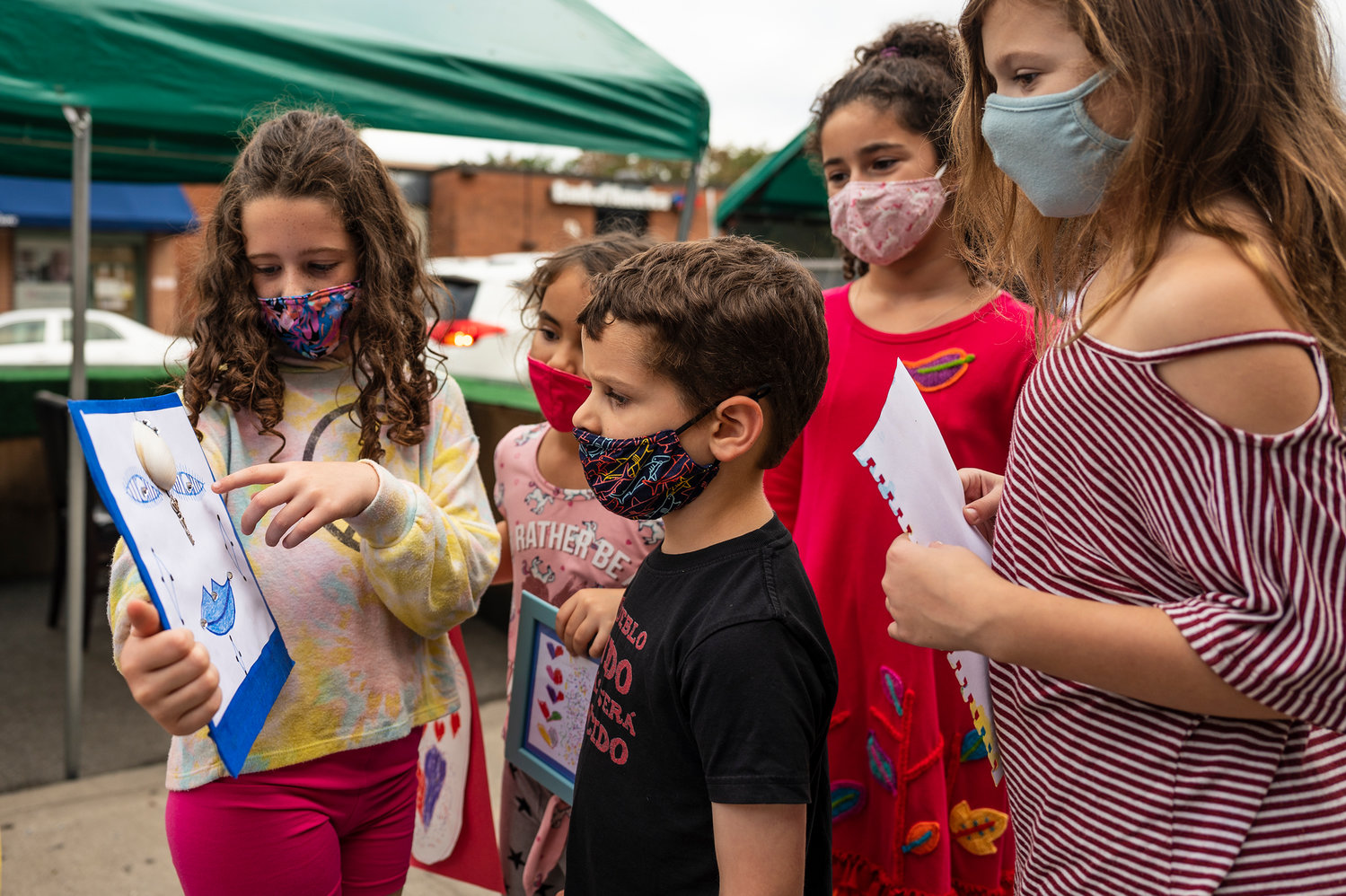 Emma Lucía Lora-Braswell has helped organize an art sale to raise money for a friend undergoing cancer treatment at Memorial Sloan Kettering Children’s Cancer Center. Emma Lucía and some of her other friends have put together collages, paintings, drawings and other artwork to sell this Sunday.
HIRAM ALEJANDRO DURÁN 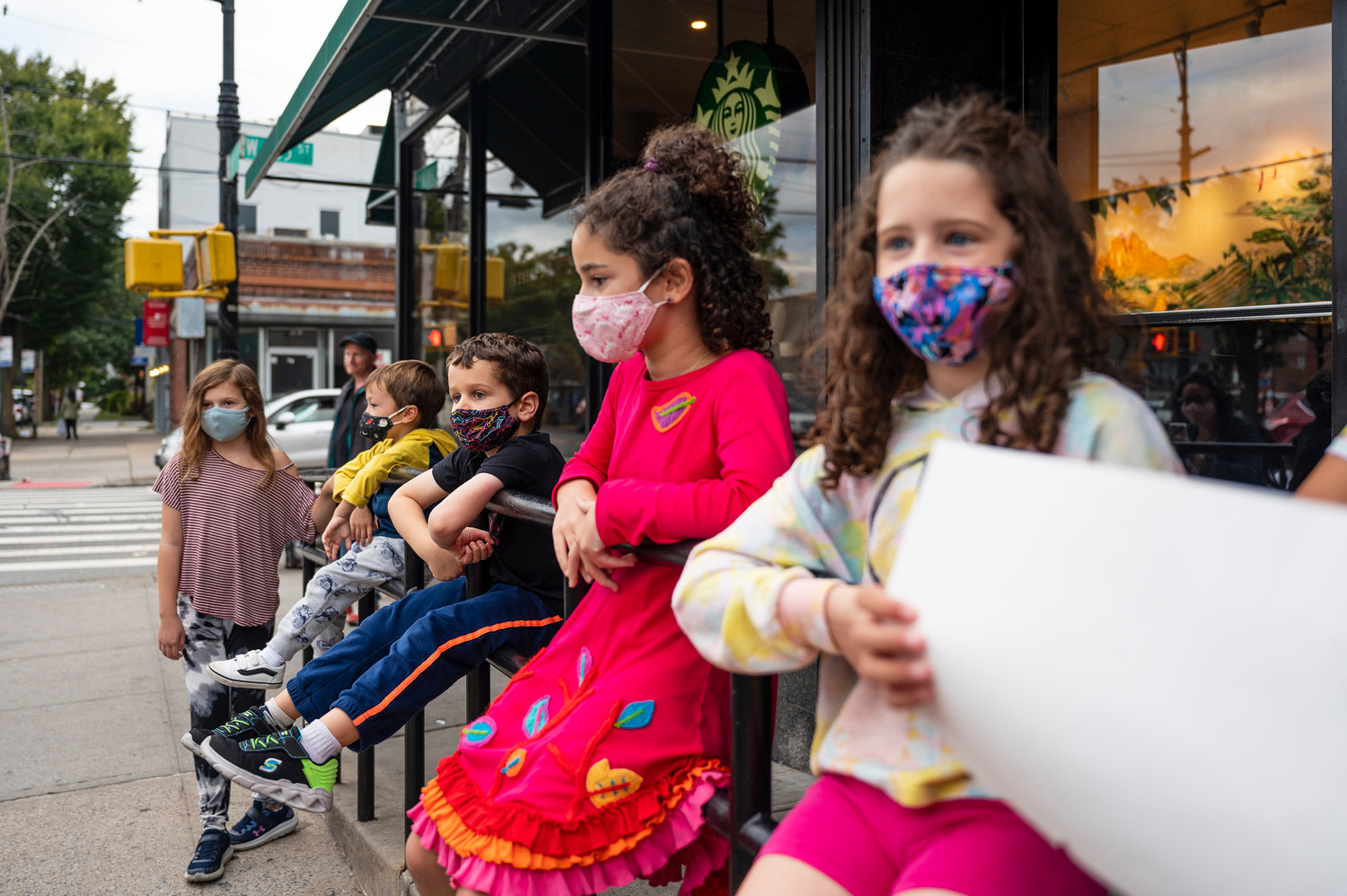 When Emma Lucía Lora-Braswell, right, found out her friend had cancer, she quickly came up with the idea of raising money for her by selling artwork. With help from mom Mino Lora, Emma Lucía’s small idea has grown into a community art sale this weekend involving several families.
HIRAM ALEJANDRO DURÃN 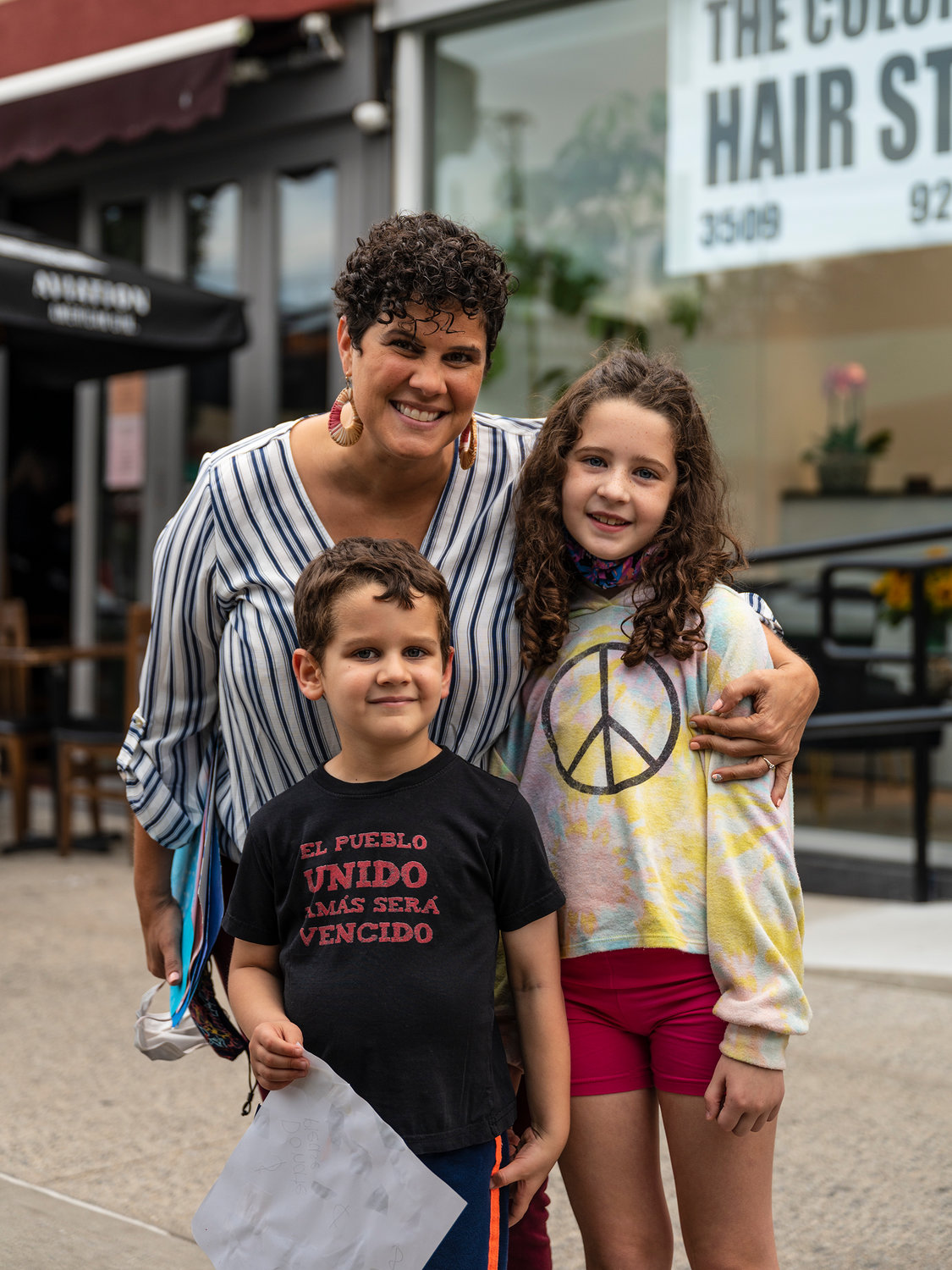 Mom and daughter Mino Lora and Emma Lucía Lora-Braswell are organizing an Oct. 17 art sale to raise money for Emma Lucía’s friend undergoing cancer treatment. Lora tapped into her network of families in this corner of the Bronx and upper Manhattan to create art for the sale.
HIRAM ALEJANDRO DURÁN
Previous Next
Want to go?

Support the effort to buy art supplies for young cancer patients at Memorial Sloan Kettering Children's Cancer Center with a kids art show Sunday, Oct. 17 from 2 to 4 p.m., in front of the Starbucks at 3503 Johnson Ave.

The past 19 months of on-and-off lockdowns and virtual school has made the coronavirus pandemic an especially difficult time for children, limiting their in-person interactions.

But Mino Lora is trying to fill that void locally — and help a neighbor along the way — with a community art sale this weekend.

“Especially during this time when kids have been so impacted by COVID, or by this year,” Lora said. “And seeing how, both as an educator and as a mother, coming back to social interactions and social places is a lot for kids. So, finding ways for young people to work with each other — even if it’s remote. And also, to know that, as a young person, you can still make a change.”

Besides being a good activity for pandemic-fatigued children, the theatre non-profit executive director and former city council candidate says the art sale’s goal is to raise money for a 4-year-old girl in her building battling cancer. The kids will raise money from their art Sunday, Oct. 17 from 2 to 4 p.m., in front of the 3503 Johnson Ave., Starbucks.

The girl, whose parents wished to keep anonymous, is good friends with Lora’s 8-year-old daughter, Emma Lucía. Wanting to help her friend through a tough time, Emma Lucía came up with the idea of doing something that would raise money for Memorial Sloan Kettering Children’s Cancer Center — the hospital where her friend is undergoing treatment.

“I decided that I could raise money and give it to her,” Emma Lucía said, “so that they could have more activities for the kids while they’re doing the chemo.”

Lora took the idea from there, using her community organizing skills to grow her daughter’s concept into a larger project. Lora reached out to other parents, easily pulling in more than a half-dozen others to join her.

But Lora didn’t stop there. She then amplified the event on her social media feeds to attract even more kids from Harlem and Washington Heights — both neighborhoods where Lora has worked as an arts educator. She’s even setting up an online page to accept donations from families who can’t make it to Sunday’s event.

“I asked mothers and parents in the building and in the community, and it started growing,” Lora said. “Then it became about art, specifically because our friend loves making art. And one of the things that has been helpful that Memorial Sloan Kettering does is they do art projects with kids who are in treatment. So, arts and crafts is one of her favorite activities that the nurses bring while she’s spending the day there.”

And as it happens, Lora’s family also is very artistic. Emma Lucía loves to paint, Lora said, but she’s also made drawings and even a collage with seashells she collected in Lora’s home country, the Dominican Republic.

Annabella Sykes and younger sister Maya will bring their own artistic vision to the sale with a series of paintings and drawings featuring hearts.

“I think for them, the sentiment was wanting to show that they cared,” said Cynthia Carrion, the young girls’ mother.

“And the symbol for that for them was hearts.”

With a goal of raising $300, Emma Lucía put suggested donations for her artwork between $5 and $20. Simpler works like watercolor paintings are on the lower end, while complex pieces that use more materials are priced higher.

“She’s like, ‘This one uses multimedia, so this one’s more expensive,’” Lora said. “She always comes to me and she’s like, ‘What do you think about the price?’ And I’m like, ‘You do know it’s suggested at the end.’ But she has a little dollar sign with a number in the backs of all of them. So, people can have an idea of what they think it’s worth.”

One challenge Lora and some of the other families faced was having to teach their kids about a life-threatening disease like cancer at such an early age. When speaking to her kids, Lora made sure to explain how treatments like chemotherapy, radiation and surgery work, as well as their effects on people, like hair loss and a comprised immune system.

“I never thought I’d be having this conversation this young,” Lora said. “But I believe in always speaking the truth to children.”

In the era of the coronavirus pandemic, Carrion sauys she’s already had many conversations with her children about sickness. So, cancer became just another illness to explain.

“I think that just was this other way that we had to approach what it means to be healthy, and how sometimes our bodies aren’t,” Carrion said.

“And all of the doctors and hospitals that are there to help people get better. So, I think we approached it from that lens.”

In a time when kids may be overwhelmed by all the issues stemming from the pandemic locally and across the country, Lora believes this event gives them one simple way to make positive change.

“It’s just like a nice way to say our kids can do so many things,” Lora said. “And let’s create spaces for them to do that. And to listen. And to use their skills to help others, and help each other.”