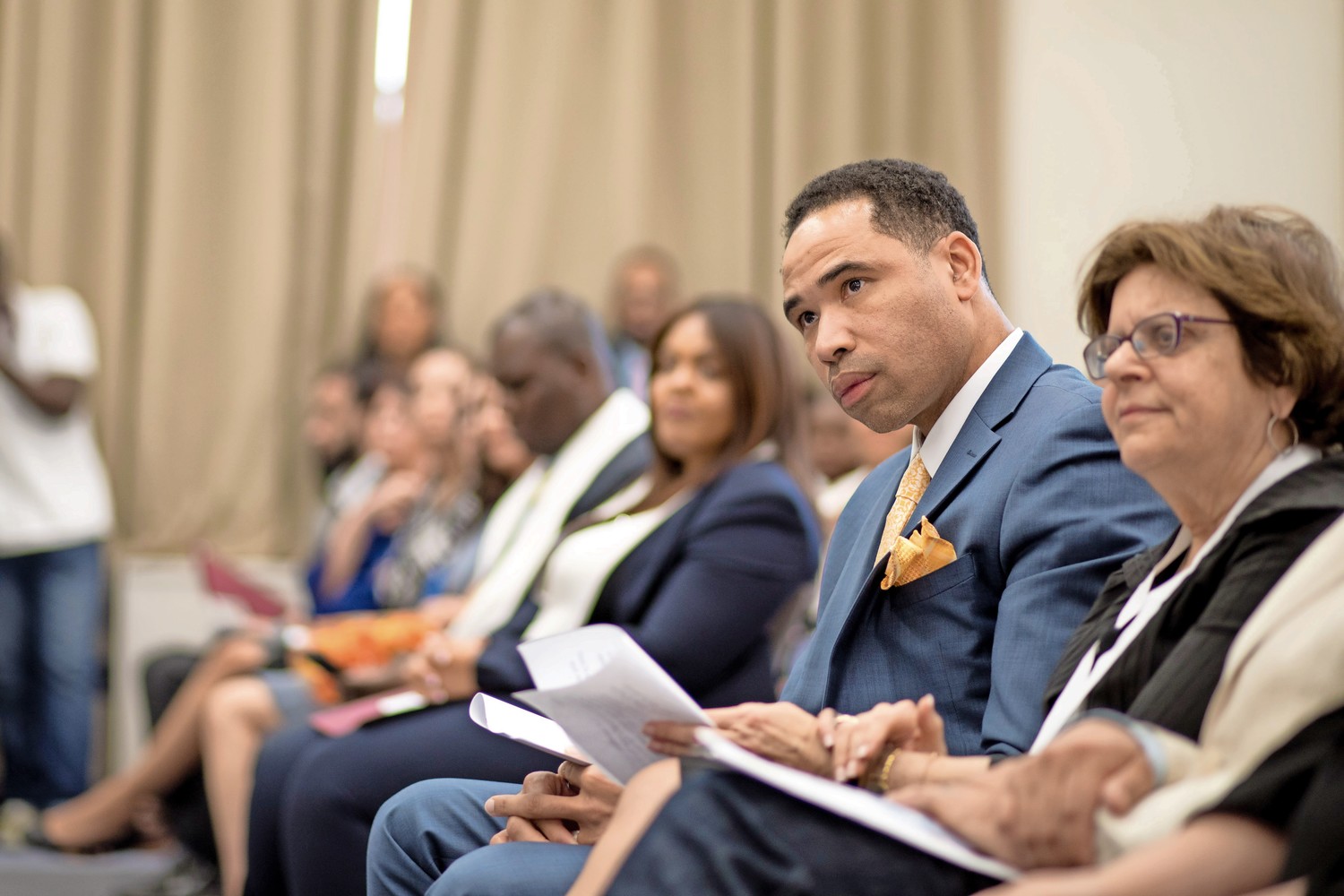 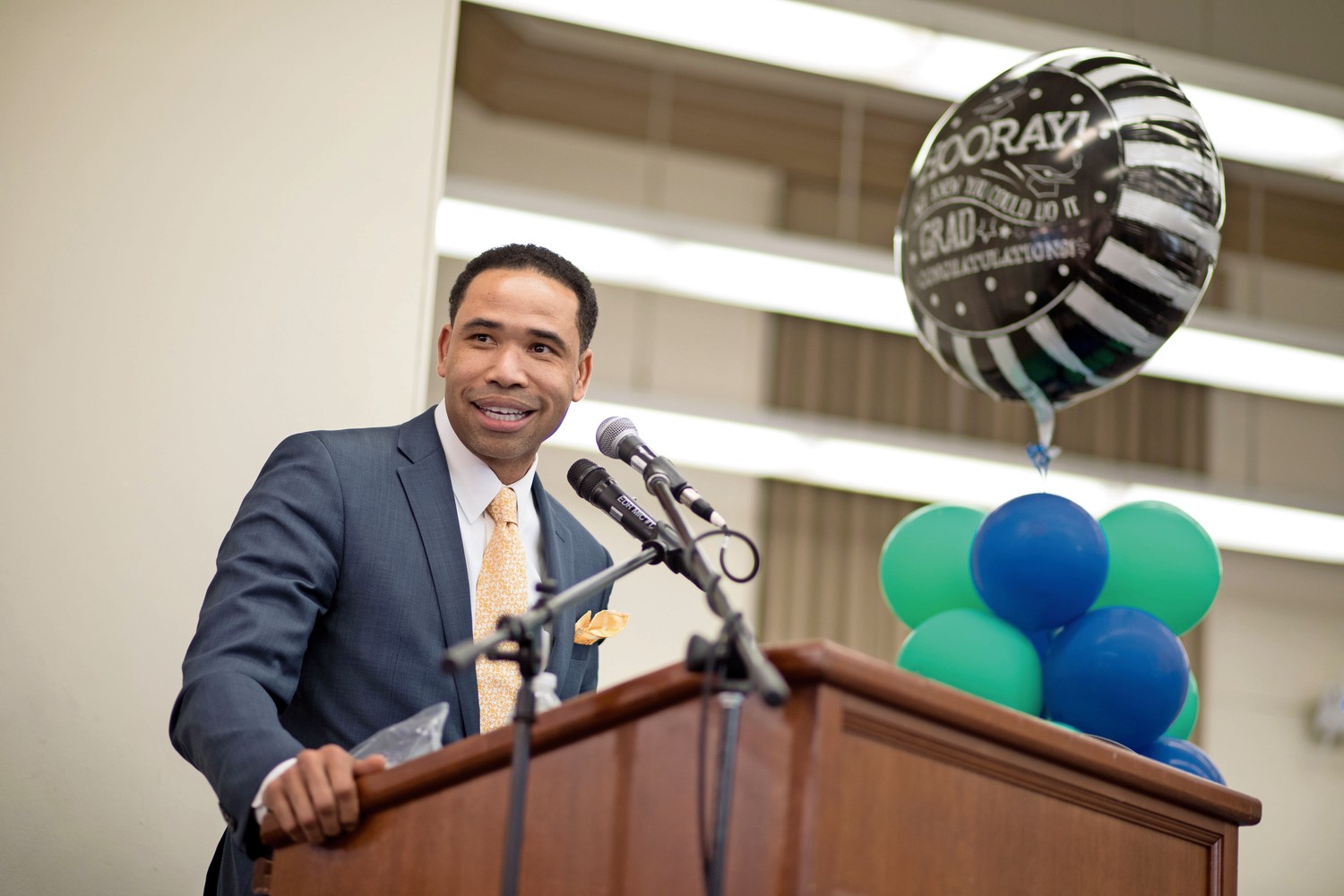 Lawrence Fauntleroy talks at an induction ceremony about the influences in his life and what it means to be graduating with a college degree at 49 years old from Lehman College. The ceremony marked the first time students from Lehman's adult degree program were joining the national honor society, Upsilon Sigma of Alpha Sigma Lambda.
JULIUS CONSTANTINE MOTAL 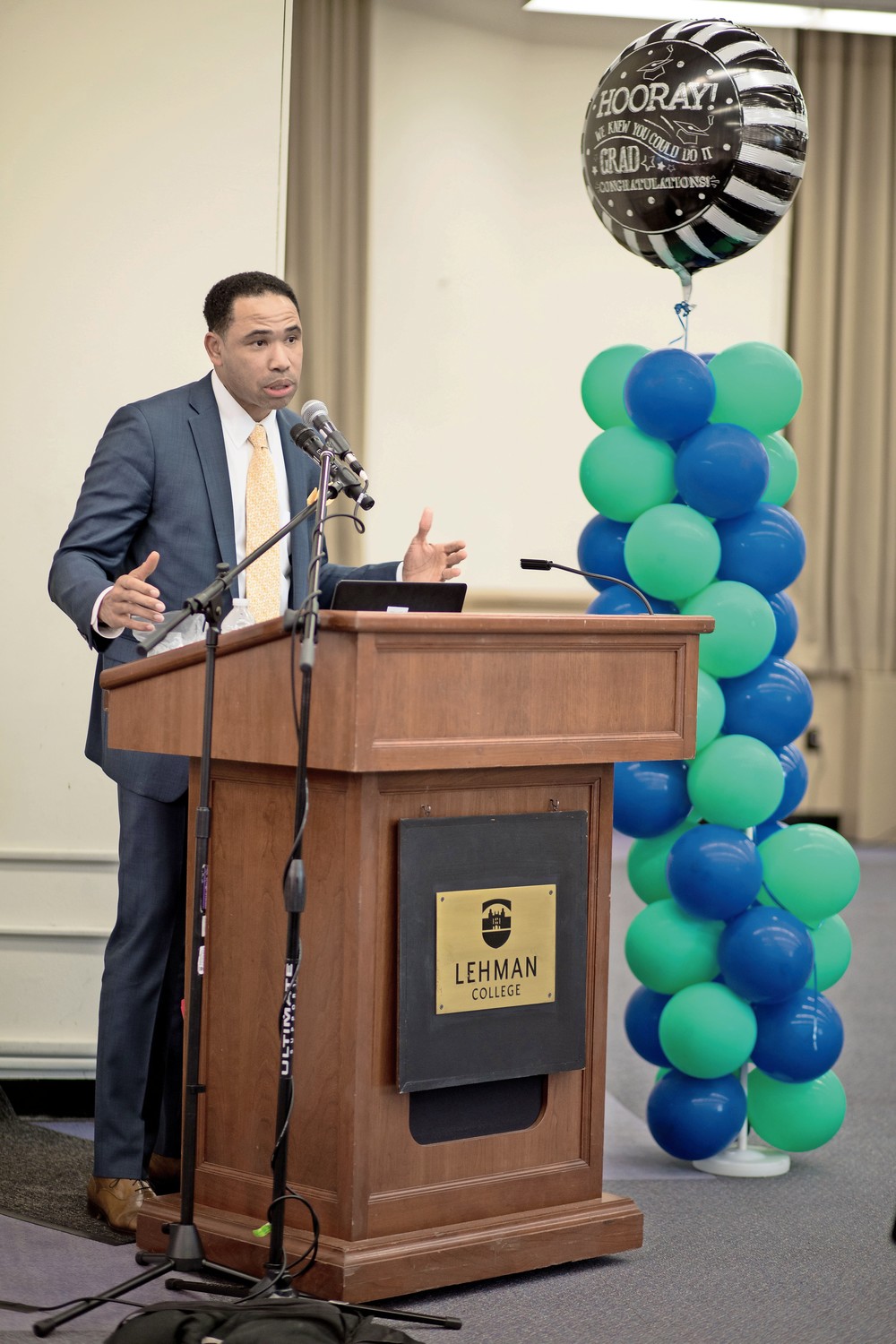 Lawrence Fauntleroy talks about his long path towards a college degree at 49 years old at Lehman College. Fauntleroy is one of many students in the adult degree program being inducted into the national honor society, Upsilon Sigma of Alpha Sigma Lambda, for the first time.
JULIUS CONSTANTINE MOTAL
Previous Next
By SIMONE JOHNSON

Age can affect many aspects of your life — eyesight, memory and even the hair on someone’s head.

But in Lehman College’s adult degree program, seasoned students prove age doesn’t hamper graduating. Of more than 200 graduates, Lawrence Fauntleroy is among 60 who will join the first class to be inducted into the national honors society for adult students, Upsilon Sigma of Alpha Sigma Lambda. And he’s just a year shy of 50.

“There is nothing more important that will get you into the work force like a degree,” Fauntleroy said. “If you want to make a productive life, it doesn’t even look like a choice anymore. I was not comfortable staying put knowing that the landscape had changed so much.”

Back in 1994, Fauntleroy had earned 30 credits at Lehman, but dropped out so he could get a job. And he did find success, first working as a radiology technician before eventually becoming an information technology director at Mount Sinai Hospital.

In fact, Fauntleroy worked there for 27 years and was paid well despite his lack of degree.

But when his little brother died in a motorcycle accident in 2015, Fauntleroy re-evaluated his life, deciding to take a second swing at his degree.

For two years he worked nonstop through summer and winter breaks and into fall and spring semesters. Eventually he achieved the 90 credits he needed to graduate.

Now Fauntleroy not only graduated with a dual bachelor’s degree in psychology and business, but also was a student speaker at his commencement. He graduated with a GPA of 3.5, earning him induction into Upsilon Sigma.

Fauntleroy isn’t alone, however. Lehman’s adult degree program is specifically designed for returning students who are older than traditional students.

“The average age of our students are 40 years old,” said Pamela Hinden, the adult degree program’s director. “These are non-traditional students, and most of them have been out of school for a very long time.”

The program is filled with full-time adults who take courses three nights a week.

Advisors are available during the evenings to help design schedules that fit into students’ lives.

“We help them think through what they need to do in order to be successful,” Hinden said.

Personally, Fauntleroy did not feel like he needed the flexibility the program offered because he quit his job to focus solely on getting his degree. However, this didn’t stop advisors from checking in with him, making sure he was on track.

While in school, Fauntleroy created his own non-profit organization that incorporated education with youth basketball programs. This allowed him to mentor kids and serve as a personal motivator while he worked toward his degree.

Before he got his bachelor’s, Fauntleroy walked around with what he called the “imposter” syndrome.

“I was mentoring kids that were getting out of Yale and Harvard, but I still didn’t have a degree,” Fauntleroy said.  “I was qualified to mentor them, but I still felt like I didn’t belong. College makes you a part of society.”

Like most recent grads, Fauntleroy is now seeking employment in something that will allow him to use the management skills he learned in school. Part of what he misses the most about corporate America is project management.

In a way Fauntleroy feels like his journey in life and through school was a lot like being away in the Peace Corps.

“I now have a new perspective,” he said. “I’m better suited for the job that I want, and I just feel like now the sky is really the limit.”