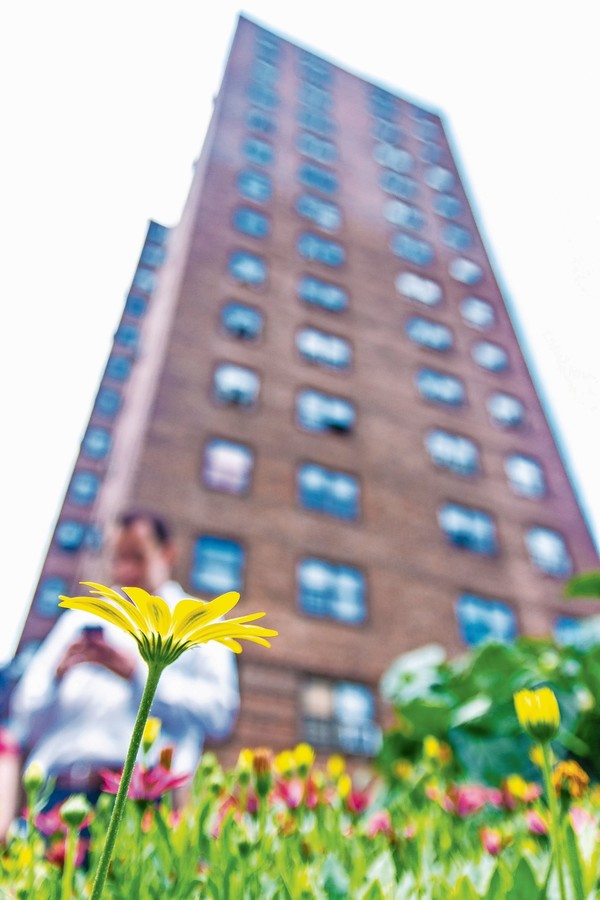 The new community garden at the Marble Hill Houses will give residents a little more color and a whole lot of fresh food. Residents began planting fresh vegetables and herbs in May.
Aaron Mayorga
By Tiffany Moustakas

For Yolanda Perez, the opportunity to grow fresh food in her community came right to her doorstep.

About a year ago, members of Outer Seed Shadow — an interactive public art and community garden project — knocked on her door at the Marble Hill Houses and asked her if she was interested in being part of a project where she can grow her own fresh food without leaving her neighborhood.

The idea of cultivating a space for homegrown vegetables and herbs in what would essentially be her backyard was appealing to Perez, a Lehman College student who studies dietetics, foods and nutrition.

Outer Seed Shadow and the Marble Hill Houses’ Marble Hill Garden Project teamed up to bring the garden to residents in November 2015. They recruited gardeners like Perez by knocking on doors in all 11 buildings in the public housing development. The partnership aims to teach volunteers how to nurture and harvest fresh vegetables and herbs.

So far, the group has gathered 22 volunteers. Before going ahead and planting various foods, representatives from Outer Seed Shadow interviewed each volunteer to talk about their cultural identity on camera. Many of them were born in mainland United States as well as Puerto Rico and the Dominican Republic, and each talked about why they chose a specific vegetable to grow in the garden. Some just liked a specific vegetable, like Brussels sprouts, while others found it relevant to their culture.

“They are just passionate and want to grow their own food,” Juanli Carrión, an artist who founded Outer Seed Shadow, said of the volunteers. “They want to learn.”

As they looked for people to be involved in the project, Carrión and Jacki Fischer, the founder and project manager of the Marble Hill Garden Project, were simultaneously trying to fund the garden. Last December, Outer Seed raised $11,000 out of the $18,000 they sought. Since then, the organization received donations and grants that have them closing in on their goal.

Despite being just $500 short, the community garden officially opened to the public Aug. 5 after volunteers planted their seeds last spring. Green plants dominated the designated gardening space right behind a bus stop on West 228th Street and Broadway.

“We wanted to show the garden in its full, magnificent” form, Carrión said, “and to prove that it’s working.”

There are 11 plant beds in the garden, with food ranging from eggplants to sweet potatoes, as well as a variety of herbs. Each plant bed is shaped by what each Marble Hill building looks like from an overhead blueprint as a way to pay homage to the garden’s home.

At just $5 per seed package, the project gives residents and community members easy access to food, Carrión said, and up to 15 plants in each bed.

“Sometimes they can’t even consume all of this fresh produce, so they give it away to other members of the garden, or even their neighbors,” he said.

Perez has harvested so many eggplants so far she’s in disbelief at how far she’s come since May.

“I didn’t know it was going to be so cool,” she said. “People walk by and say, ‘I see your eggplants,’ and now they’re gone. So many people have tried them.”

To Fischer, the gardening project has helped bring Marble Hill and other local residents together in a unique way.

“The residents in this development and this community have really played a huge role in guiding and welcoming us and making sure this program is a success,” she said. “As a result, this garden has become a very special and safe space.”

Perez has the same feelings toward the project, noting that she’s made a lot of friends while tending to her eggplants — ones she never would’ve known otherwise.

“It’s embarrassing to say that a lot of garden members I met here live in my building and I’ve never seen them before,” Perez said. “Before, I was like very close-minded to walk out of the apartment, get to the destination, and don’t look to the side and get to know my neighbors. This brought us together.”

As she continues to harvest eggplants everyday, Perez hopes others will take an interest in growing their own food.

“It’s nice to step out of your comfort zone and to do something that other people want to eat,” she said. “It’s exciting.”

MTA's plans to cut express service is on hold — for now

Supporters are ready to welcome their new neighbors