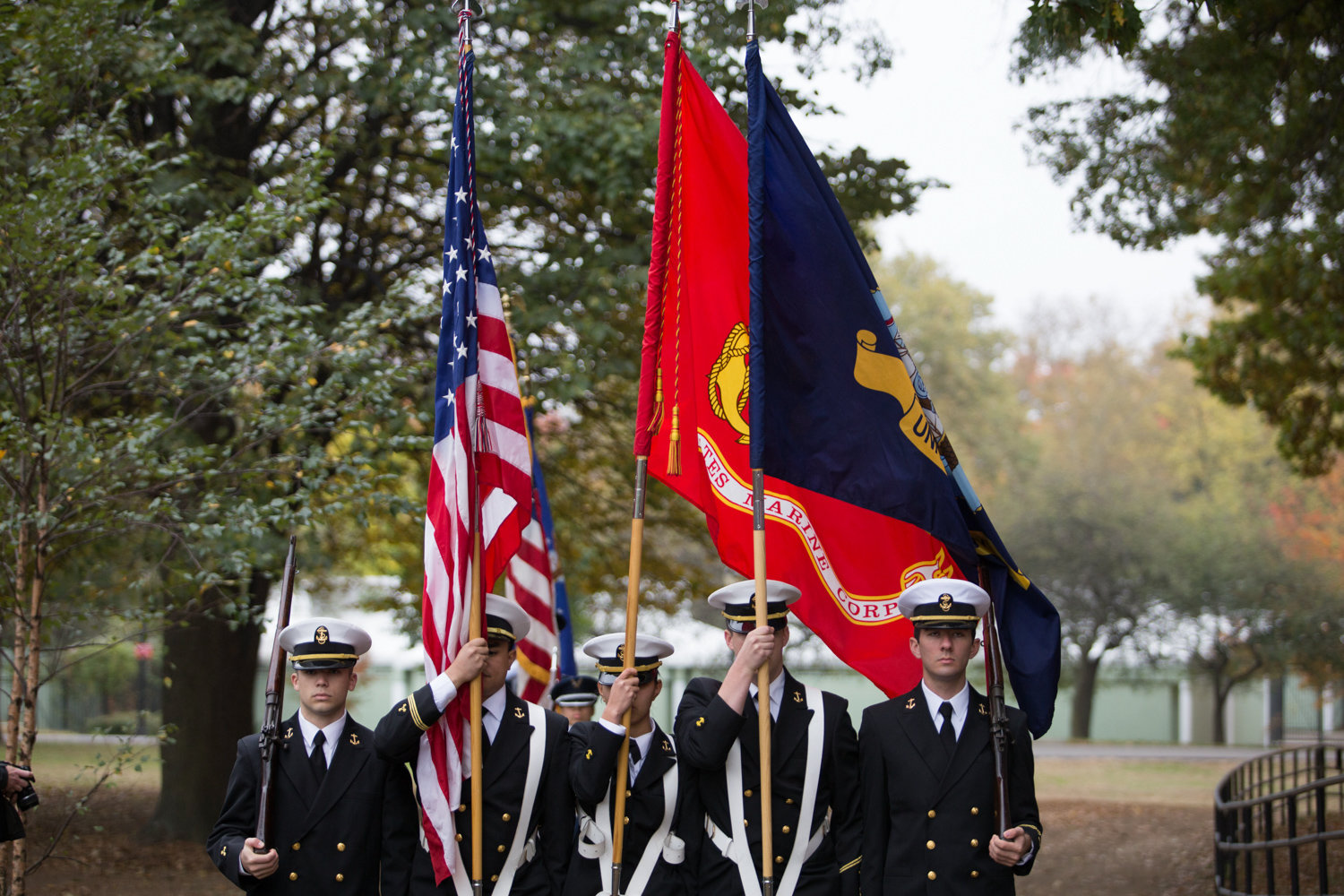 Maritime Navy ROTC members present the colors at the opening of a Veterans Day ceremony at Memorial Grove in 2017. Local veteran Herb Barret first organized the ceremony in 2007 when he sought to restore the Van Cortlandt Park location with his friend and fellow veteran, the late Donald Tannen.
JULIA SCLAFANI / File 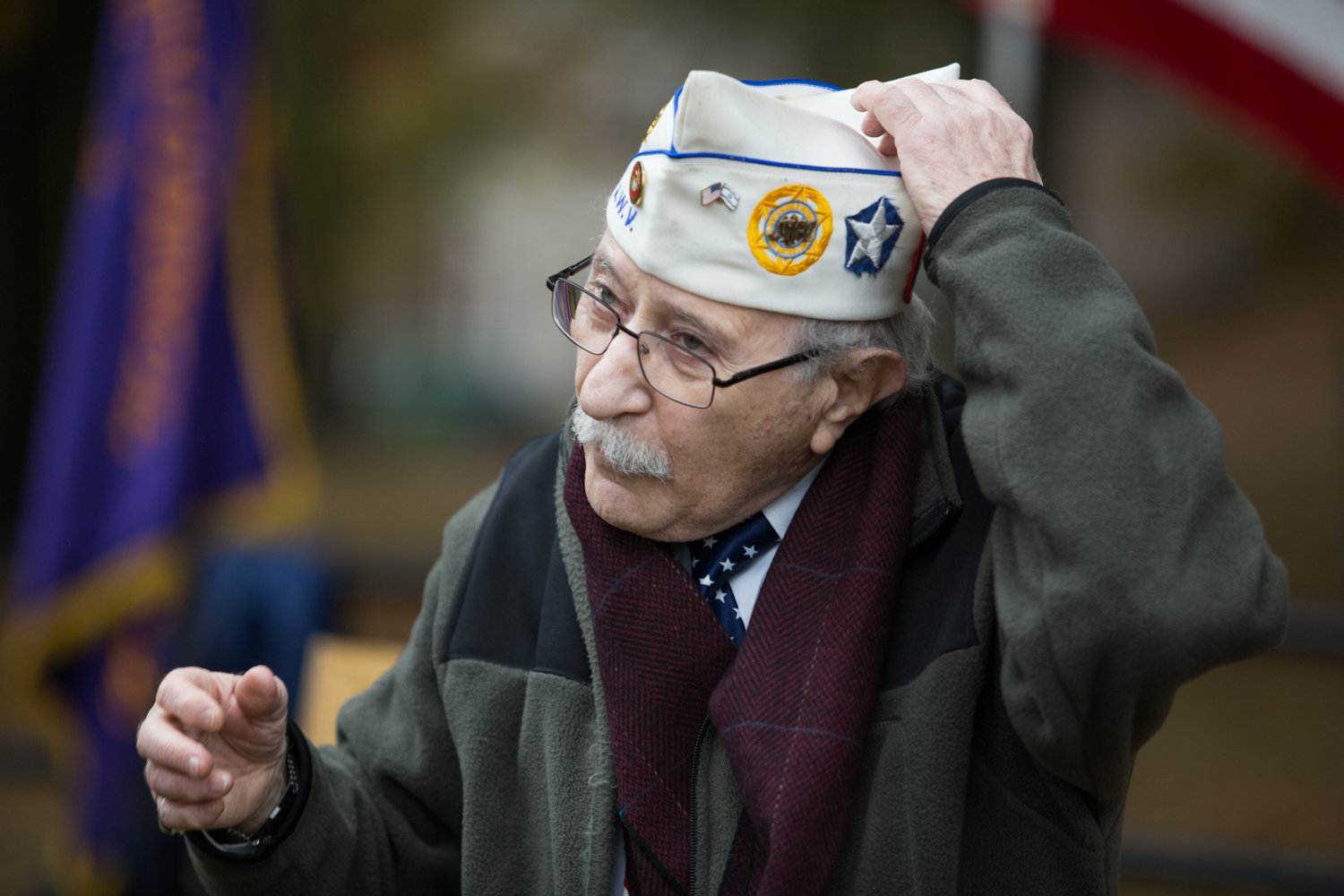 Herb Barret puts on his cap before opening the Veterans Day ceremony at Van Cortlandt Park’s Memorial Grove in 2017. Barret first organized the ceremony in 2007 with his friend and fellow veteran Donald Tannen, who died in 2014.
JULIA SCLAFANI / File 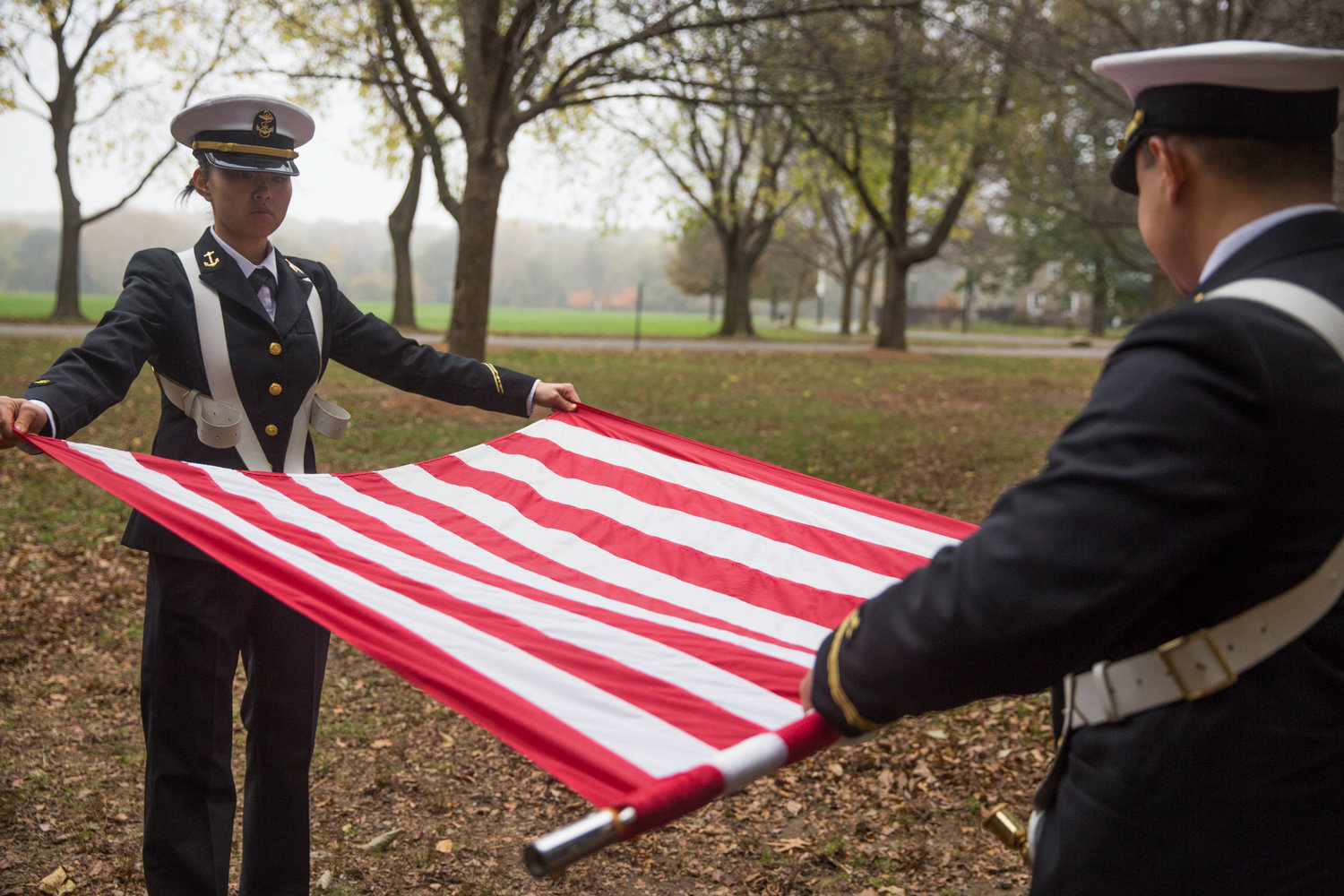 Members of the SUNY Maritime College Color Guard roll the flags after the presentation of colors at a Veterans Day ceremony at Memorial Grove in 2017.
JULIA SCLAFANI / File 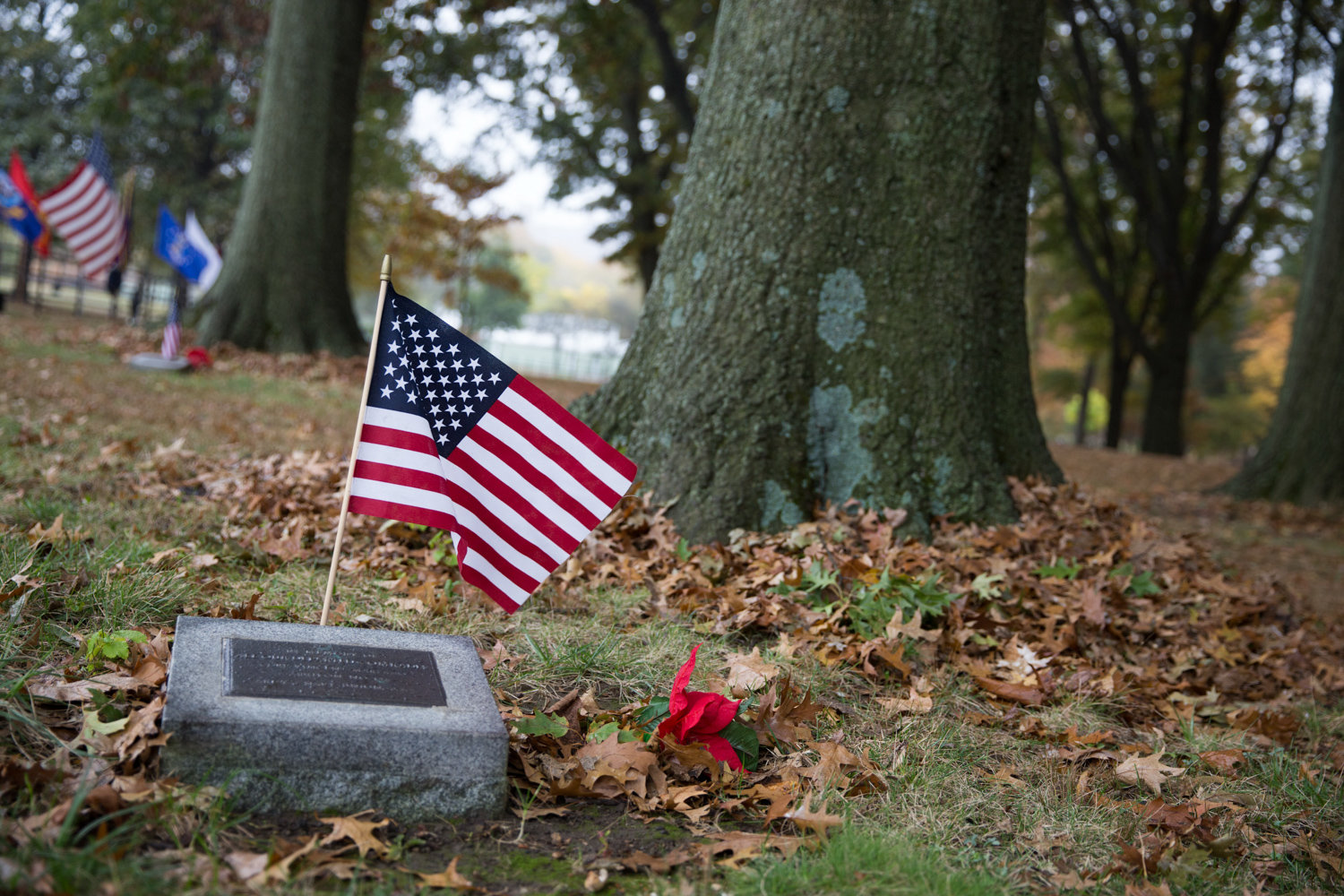 A World War II memorial in Memorial Grove, decorated by Herb Barret, honors the memory of fallen soldiers. Donald Tannen, who died in 2014, helped Barret in his effort to restore the grove in 2007.
JULIA SCLAFANI / File 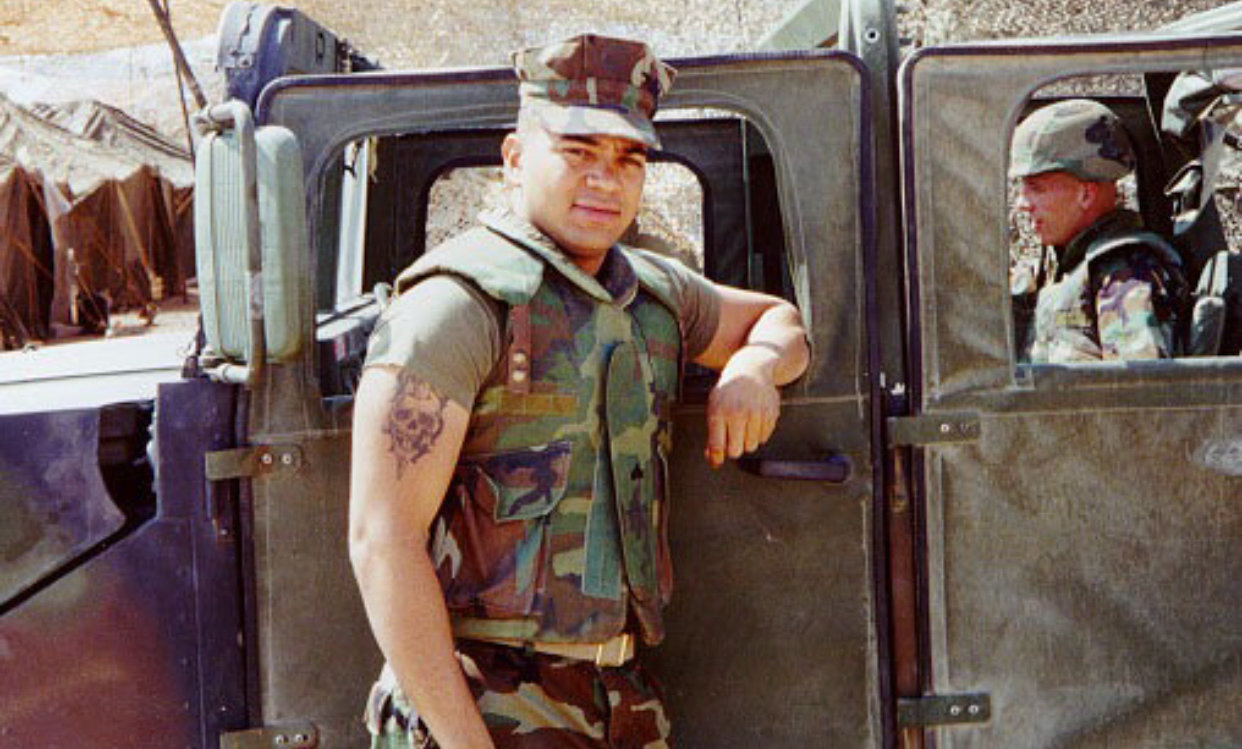 A 2004 photograph shows Elio Acosta deployed as a Marine in Kuwait. Acosta is now studying photography at Lehman College.
Previous Next
By KIRSTYN BRENDLEN

He might be in his 40s, but it was a long road for the first generation son of immigrant parents from the Dominican Republic. And it almost didn’t happen.

“In the ‘80s, there were a lot of hard times,” Acosta said. “I was headed nowhere fast, as they say. I was all over the place then.”

Acosta wanted to get to college, but didn’t know how to pay for it. That is until he he saw a military recruitment commercial.

“‘Join the Army, we’ll give you college money,’” Acosta remembers the commercial saying.

That prompted him to visit a recruitment center. “I walked in there like a champion. I said, ‘Are you giving money for college if you join the Army?’ (The recruiter) said, ‘Yes. But this isn’t the Army.’”

Instead what Acosta had found was the U.S. Marine Corps. They shipped him to Parris Island, South Carolina, for basic training, and it was there Acosta got his first taste of life outside the Bronx.

Boot camp was a kind of wake-up call for what the “real world” was like.

“When I first arrived, I was belligerent,” Acosta said. “I was not following orders. There was one time things got out of hand. I was in so much trouble. They pulled me aside and told me the realities of the world, that boot camp is designed in a certain way, where for you to survive and graduate from boot camp, you have to have certain qualities.”

And Acosta did graduate, earning some domestic postings, including one in Illinois. That is until Sept. 11, 2001. Soon after, Acosta was shipping out to Kuwait to take part in Operation Iraqi Freedom.

“When I joined the Marines in ’97 or ’98, I said, ‘Ma, don’t worry. The U.S. is never going to go to war,’” Acosta said. “We had barely 48 hours to get our stuff. At first it didn’t really sink in, but they gave us, I think, four days. I had to go down to Florida to see my daughter, then to New York to see my family over here. When it really struck was when I was saying good-bye to my family.”

He was in Kuwait for five months, first involved in active fighting and then later in recovery efforts. Acosta had to work to keep his cool while he was there, he said, fighting the urge to think about the risks he was taking and his family back at home.

“You have all the training in the world, but one of two things happen when you hit the front line,” Acosta said. “You either retain that training and stay on track, or you lose it all and you go crazy. I was able to keep my training and stay focused.”

He had to detach himself from thoughts of his family, however, focusing on the task at hand until he was able to get home.

“It’s something I learned in boot camp,” Acosta said. “One of the best ways to survive is to isolate yourself from the people in your life, just focus on now and surviving until the end.”

It was after he returned to Illinois that Acosta started experimenting with a new digital camera.

“I took a lot of pictures,” he said. “I was annoying people. But it was my first 1.2-megapixel camera.”

Acosta soon switched over to an early model iPhone, complete with a camera and a host of other modern conveniences. It wouldn’t be until 2017 before he got his first digital single-lens reflex camera after years of careful research and waiting for prices to drop on the models he coveted.

Now, two years later, he’s almost done with his degree at Lehman and enrolled in a film development class.

Acosta is usually quiet about his military service, not volunteering the information on a whim. But New York is supportive, he said, and in the future he hopes to do more for his fellow veterans.

“I don’t wear my veteran stripes on my sleeve, but I do support it,” he said. “Sometimes I wish I was in a different position where I could do more to benefit Marines.”

One way people can support veterans like Acosta takes place this weekend at Van Cortlandt Park’s Memorial Grove. Korean War veteran Herb Barret will preside over the Veterans Day service, as he has every year since 2007.

Barret and fellow veteran Donald Tannen worked together to restore the grove after it had fallen into a state of disrepair. It’s now home to 41 monuments, honoring veterans and those who have made a difference like President Franklin Roosevelt and Gold Star mothers — women who lost sons and husbands in combat.

“I fly a flag behind the podium,” Barret said. “A large flag with 48 stars. It flew for the soldiers in the monument. It was changed in ’62. We gained two states, Alaska and Hawaii. I keep flying the 48 flag during the ceremony,” he said, to honor the soldiers who fought under 48 stars.

The 12th annual service will take place at the grove near West 246th Street and Broadway beginning at noon on Nov. 3.

It gives anyone in attendance a chance to thank a veteran, and for veterans themselves, a chance to reflect.

“I’m glad I went, I don’t regret it,” Acosta said. “I really do believe a lot of positivity came into my life because of the service.”

CORRECTION: Elio Acosta, a U.S. Marine Corps veteran who shared his story ahead of Veterans Day, is pursuing a business management degree at Lehman College. A story in the Oct. 31 edition shared an incorrect major.