Ready to chase dreams, wherever they lead 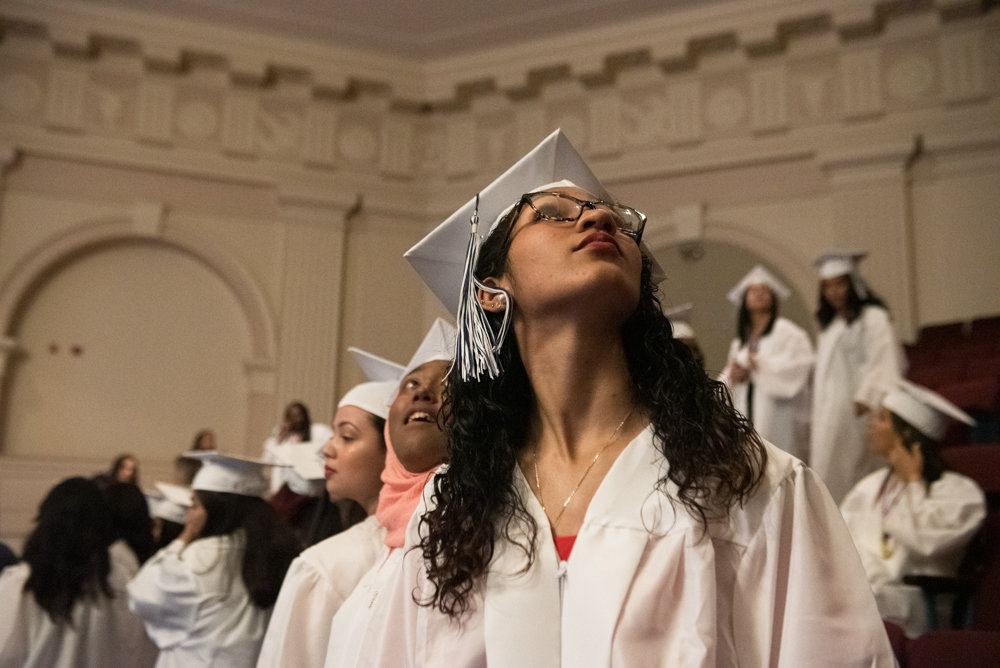 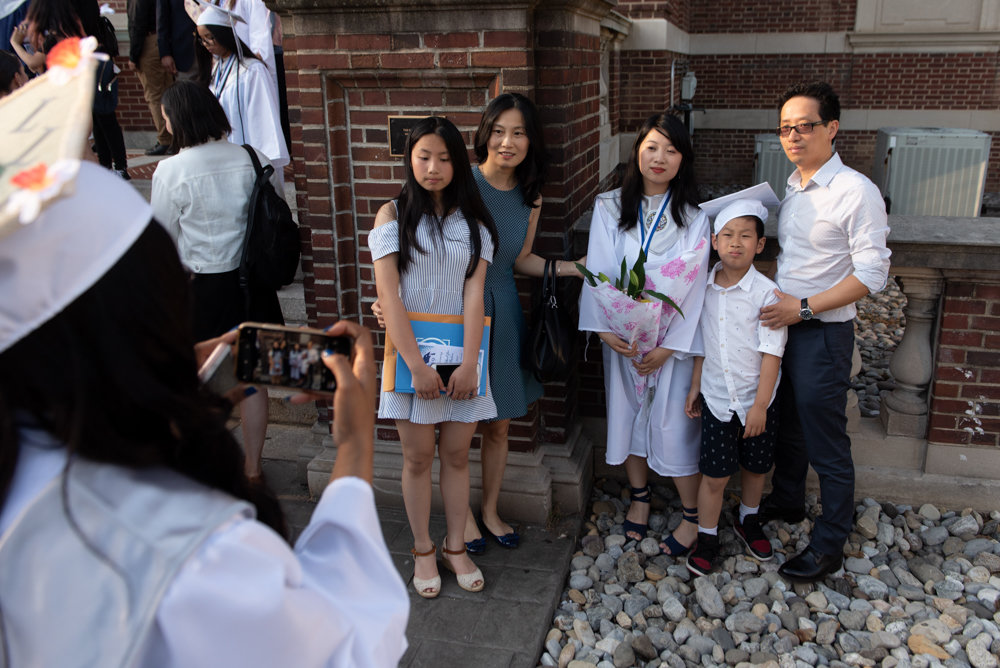 Graduates of Marble Hill School for International Studies take pictures with loved ones after their graduation ceremony at the College of Mount Saint Vincent.
FRIDA STERENBERG 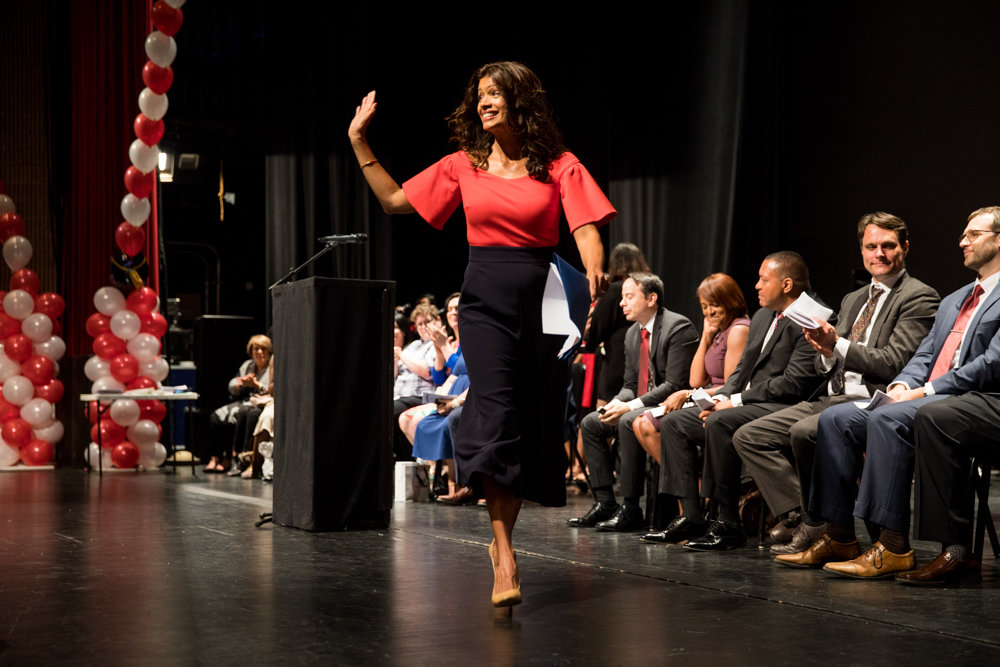 Andrea Navedo waves to the audience as she walks off stage after delivering the keynote address for DeWitt Clinton High School’s graduating Class of 2019. Navedo stars as Xiomara Villanueva in ‘Jane the Virgin.’ Navedo detailed her journey from nearly being a high school dropout at Clinton to becoming a successful working actress.
JULIUS CONSTANTINE MOTAL 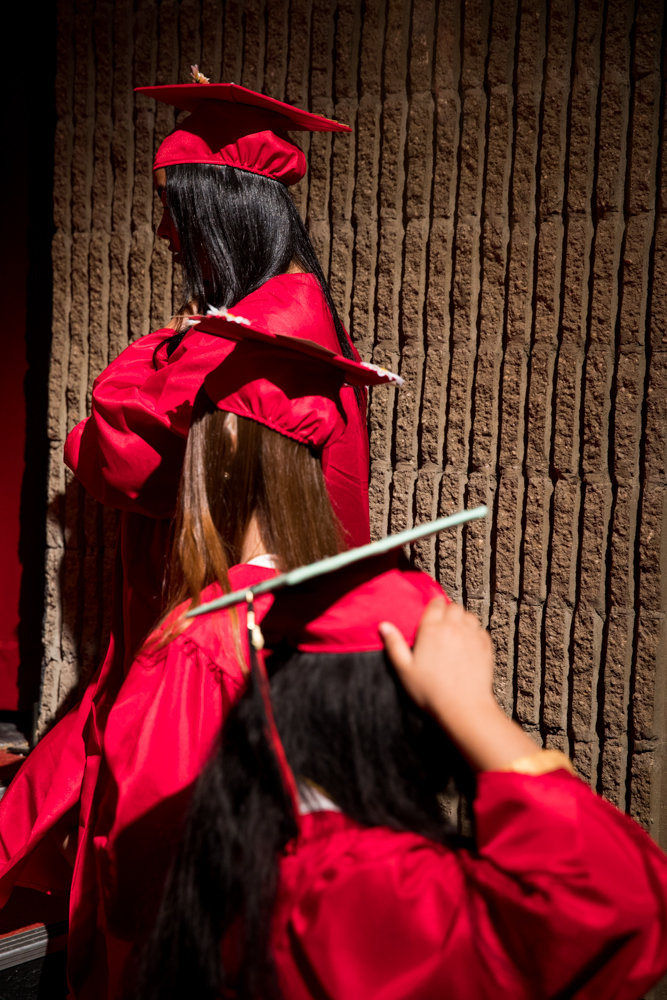 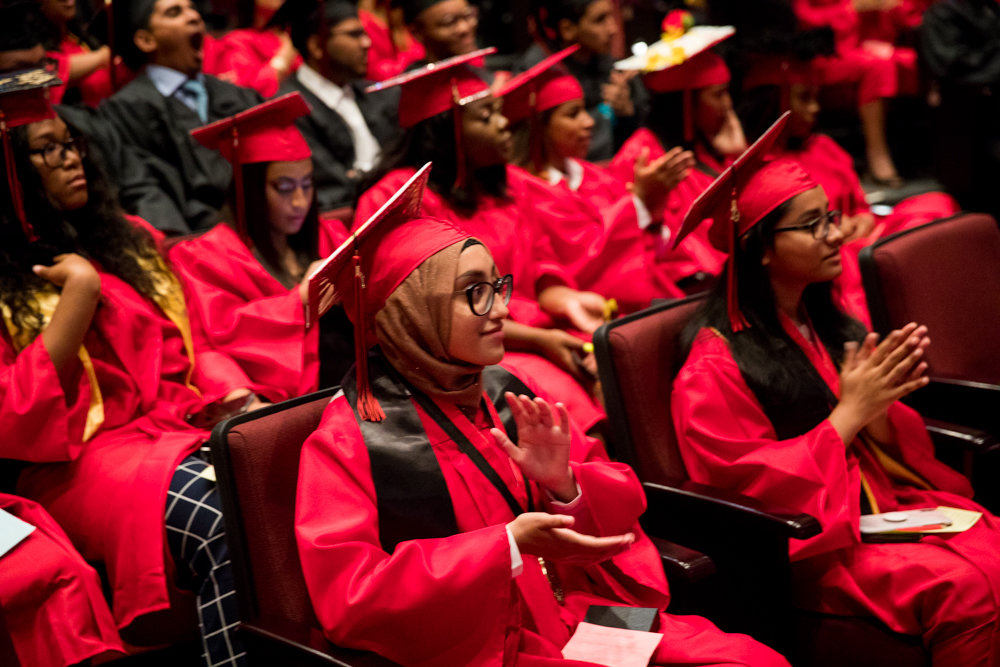 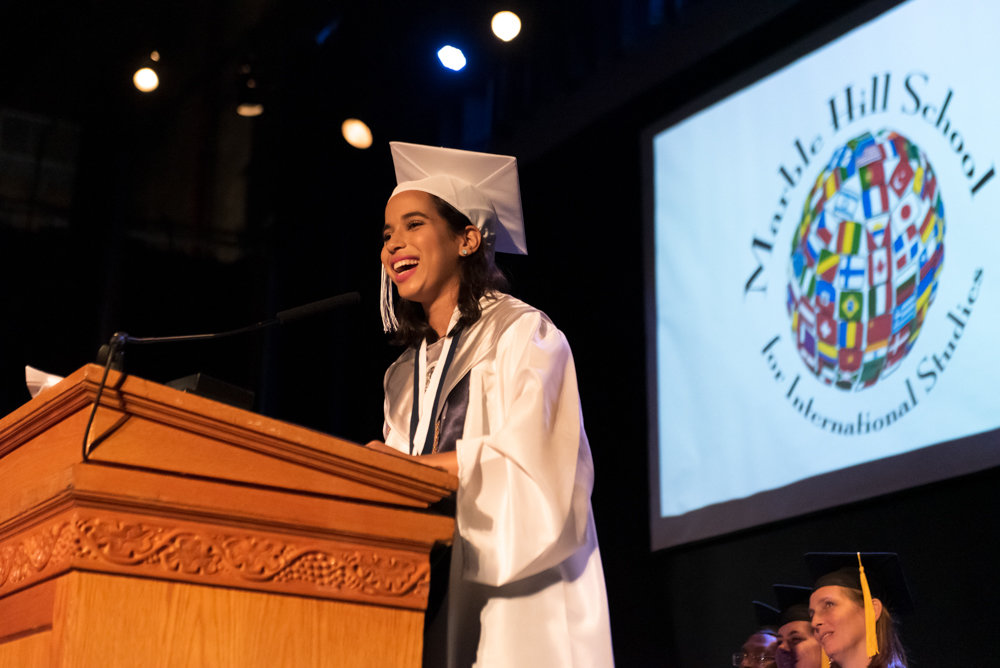 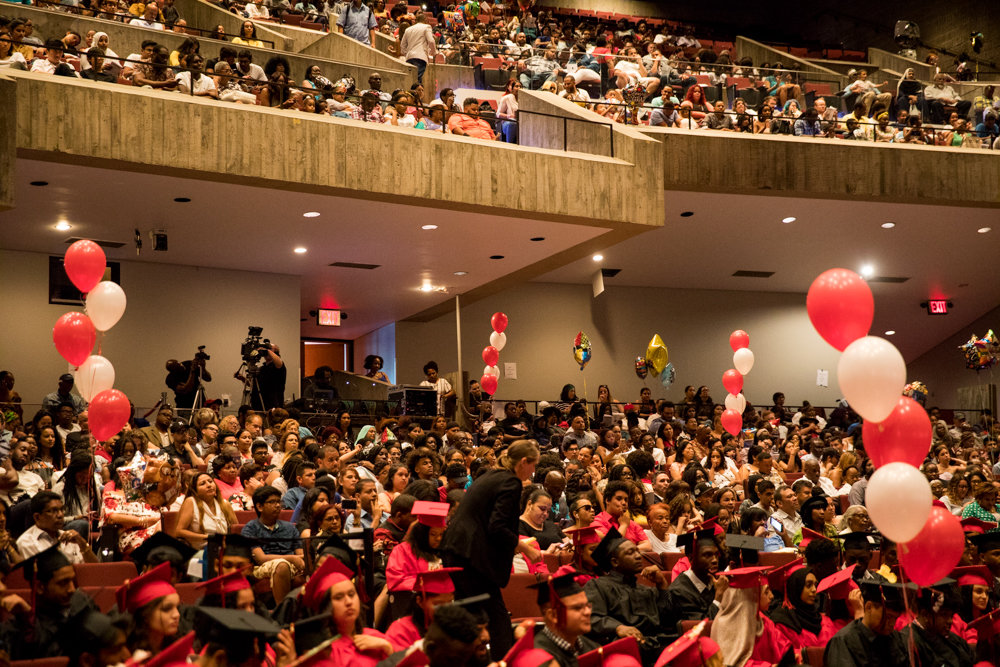 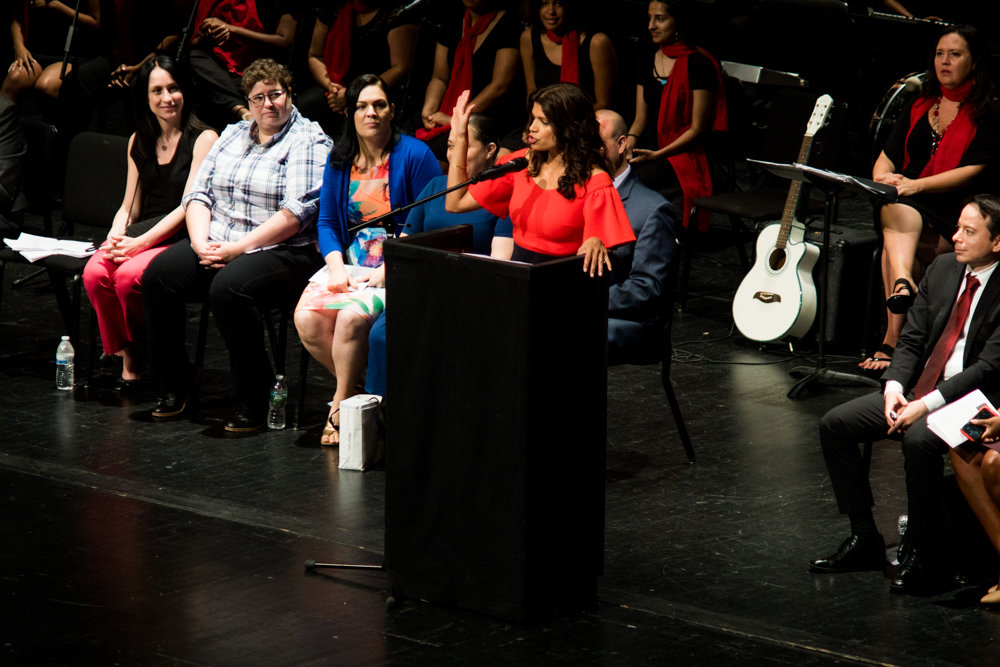 Actress Andrea Navedo talks about her journey from nearly being a high school dropout at DeWitt Clinton High School to a successful working actress during her keynote address to Clinton’s graduating Class of 2019. Navedo stars as Xiomara Villanueva in ‘Jane the Virgin.’
JULIUS CONSTANTINE MOTAL 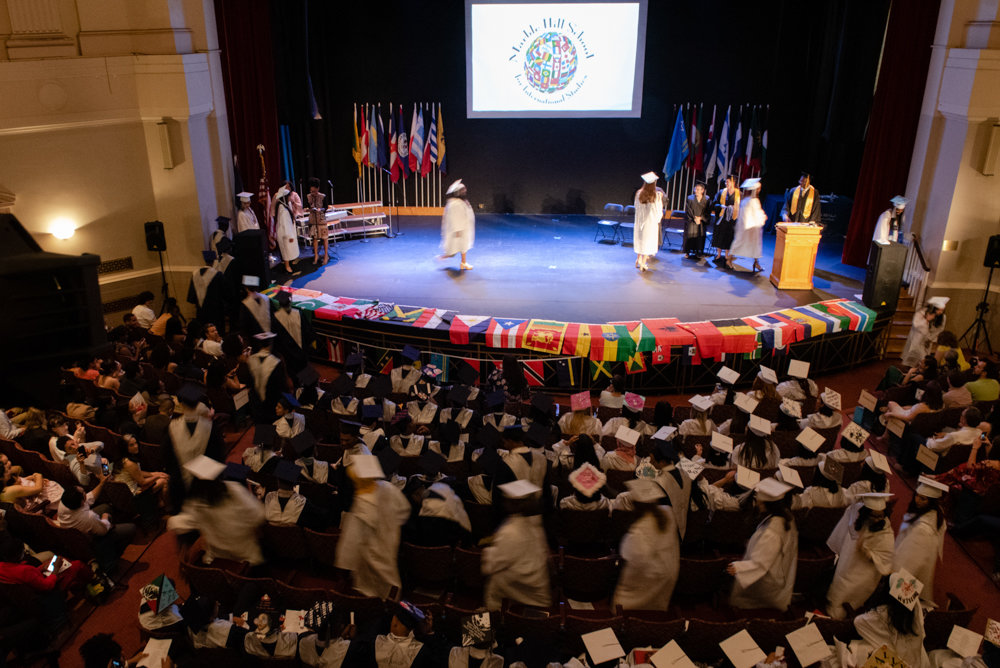 Graduating seniors of Marble Hill School for International Studies are called to the stage to receive their medals in the Hayes Auditorium at the College of Mount Saint Vincent.
FRIDA STERENBERG 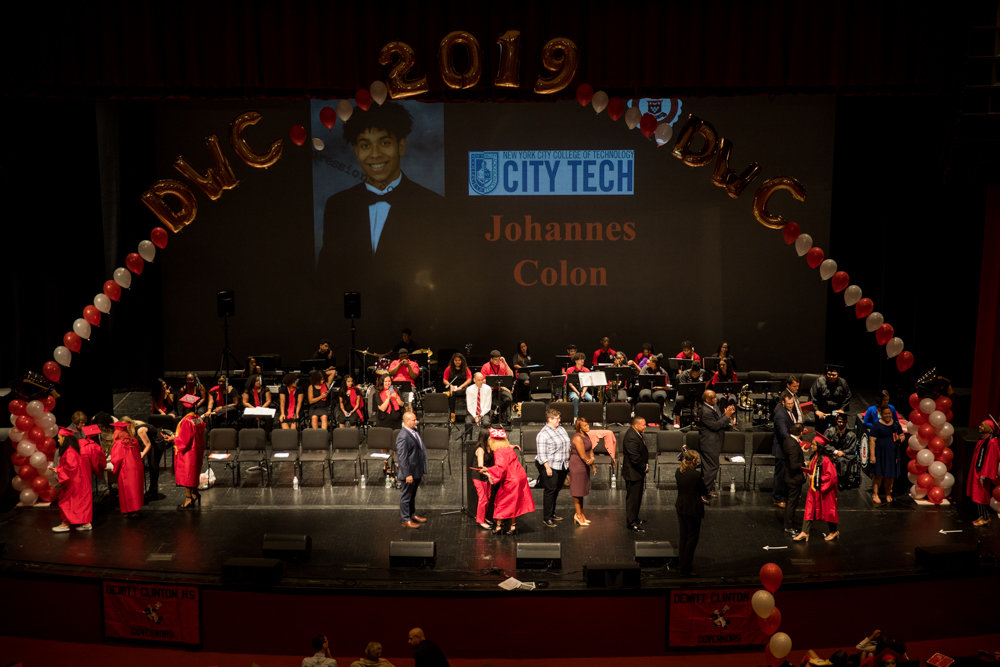 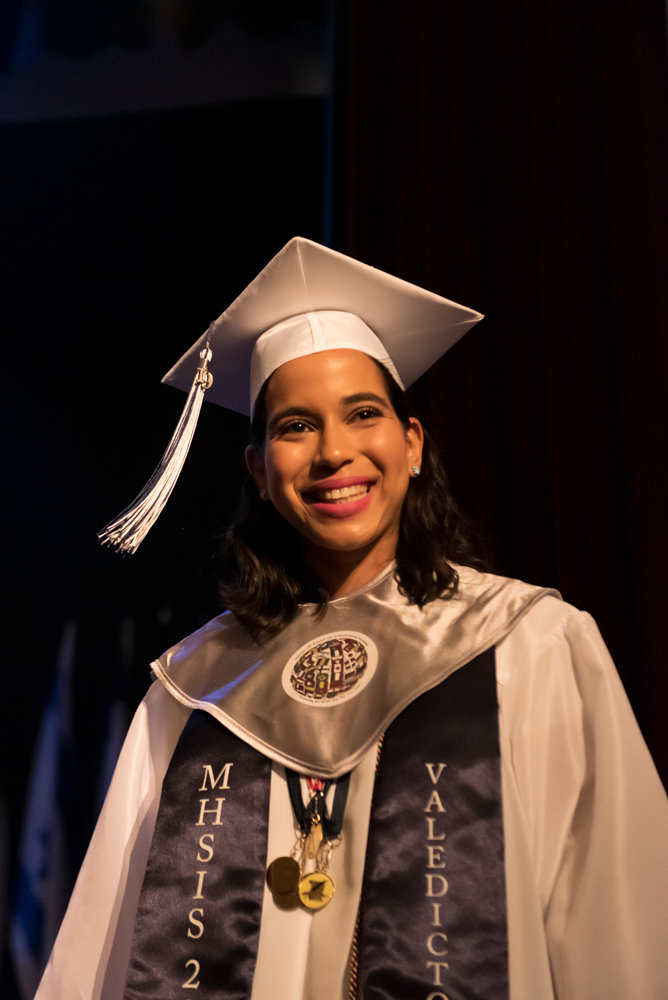 Angela Veras Oriach smiles as she leaves the stage after receiving an award during the graduation ceremony of Marble Hill High School for International Studies. Oriach was her class valedictorian.
FRIDA STERENBERG 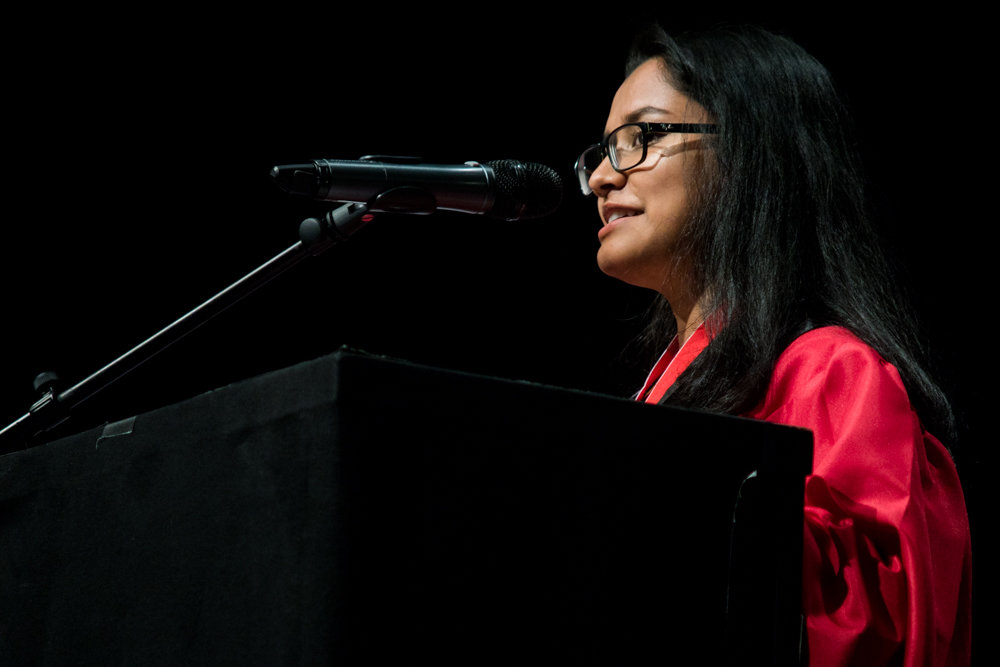 Tazkia Afra, valedictorian for DeWitt Clinton High School’s Class of 2019, talks about her journey and the road ahead.
JULIUS CONSTANTINE MOTAL
Previous Next
By HEATHER J. SMITH

With the gravitas of time-honored tradition and the bittersweet parting of friends, the Class of 2019 thanked the people who shaped them into bright young adults, stepping boldly into the next stage of their lives.

At Marble Hill School for International Studies’ commencement last month, keynote speaker Nariman Heikal reflected on the four years she spent watching the 100-odd students seated before her blossom into accomplished scholars. As manager for the school’s iMentor program, Heikal connected students with volunteer coaches, shepherded them through academic growth, and supported them through self-discovery.

“We’ve been through so much in these last four years,” Heikal said. “Literal blood, sweat and tears.”

Each student experienced hardship. Some struggled to adjust to high school, others to a whole new country, culture and language. They scrambled to write resumes and score internships, research colleges, and apply to universities. Heikal celebrated when they were accepted to their schools of choice, and reassured them when they were rejected.

“You rose from the ashes like the magnificent beings you are,” Heikal said. “You know we have no choice but to bounce back, and you’ve all done it with such triumph.”

Like many of the graduates, Heikal is the child of immigrants who brought their family to the United States to ensure a good education. She and her brother didn’t have much growing up, but their parents leveraged every material possession to feed their children’s desire to learn.

After four years of early morning pep talks and afternoon vent sessions, Heikal said she has seen in her students that same thirst for knowledge.

“Each one of you is so beautiful to me, and I sincerely hope that when I have my own kids one day, that they turn out like you,” Heikal said, her voice trembling. “Sincere, passionate, intellectually curious and forgiving.”

Valedictorian Angela Veras Oriach distinguished herself through academic excellence and social activism. The oldest of five children, she and her family arrived from the Dominican Republic in 2013. The source of her success was rooted in the help of her parents, siblings, teachers and friends.

Like the pressure that transforms ordinary carbon into precious diamond, the challenges of the last four years made the students better people, she said. Their generation enters adulthood with a world of political and environmental uncertainty ahead, but they are already equipped with the tenacity and bravery to take it on.

“This is our time to shine,” Veras Oriach said.

Principal Kirsten Larson struggles each year to write a concise commencement speech that properly expresses the pride she feels in each graduate. As freshmen, each student wrote about what mattered to them and how their personal ethics and beliefs would guide them through their time at Marble Hill. Their essays revealed each yearned to grow and to push themselves academically, intellectually and personally.

Some graduates are lifelong New Yorkers, Larson said, and some came to this country only a few years ago.

They graduate with experiences others only dream of: studying internationally, debating at Ivy League universities, representing their school at high-level sporting events, rowing the Harlem River, volunteering their time to help others, writing and performing poetry, and stepping outside their comfort zones to grow as individuals.

“Each of you has traveled an incredible and unique pathway,” Larson said, “littered with bumps and smooth sections, peaks and valleys that make you the person you are today, and the person you will become tomorrow.”

At DeWitt Clinton High School’s commencement, valedictorian Tazkia Afra thanked her fellow graduates for their friendship and support as she adjusted to a new home, after immigrating from Bangladesh just five years ago.

But as she made friends, she realized she wasn’t the only person with a different story.

“We all come from diverse cultures and backgrounds with stories unlike anyone else’s,” Afra said. “Once I fully embraced the changes in becoming part of the DeWitt Clinton community, I felt more confident and happier in where I was.”

Keynote speaker Andrea Navedo told her own unique story. The 1988 Clinton alum boasts a list of starring roles in major television series and movies, but is best known as Xiomara Villanueva in The CW’s comedy drama series “Jane the Virgin.”

But before she was a successful actress, Navedo was a high school dropout without any clear way forward. An abusive boyfriend and low self-esteem convinced her that her dreams were unattainable.

“I told myself I was stupid and I didn’t have what it took to be smart or successful,” she said. “I was lost and I didn’t know how to find my way. But deep down inside, I knew I wasn’t living up to my potential.”

She eventually turned her life around by following her parents’ example. Although they divorced when she was young, Navedo remained close to both. Her father earned his college degree while working full time. Her mother left an abusive relationship and continued her education.

“Without knowing it, my parents embodied a growth mindset,” Navedo said. “They showed me that I could change my life. That I had value. That I was enough, and that I could work for a better life.”

With the help of her family and teachers, Navedo ultimately finished her senior year and went on to college.

She discovered a love of acting, earned a theatre degree, and set her sights on another impossible dream: Becoming a successful actress.

She didn’t delude herself about how hard it would be.

“I knew the odds were stacked against me,” Navedo said. “I was Latina — brown, the other — and not what mainstream media valued at the time.”

But she fought for her dream. There were endless rehearsals, hopeless auditions, small paychecks, and seemingly unending rejections.

“But the fact that I was born and bred in the Bronx taught me so much,” Navedo said. “It conditioned me to strive, to go the distance, to persevere, to be tenacious.”

She used what made her different to launch her dreams.

“So take your ‘otherness’, your Latina-ness, your African-ness, your Bronx-ness, your immigrant-ness — whatever your otherness is — and let it fuel you,” Navedo said.

“Use it to your advantage to reach your unattainable dream. It can be your secret weapon.”