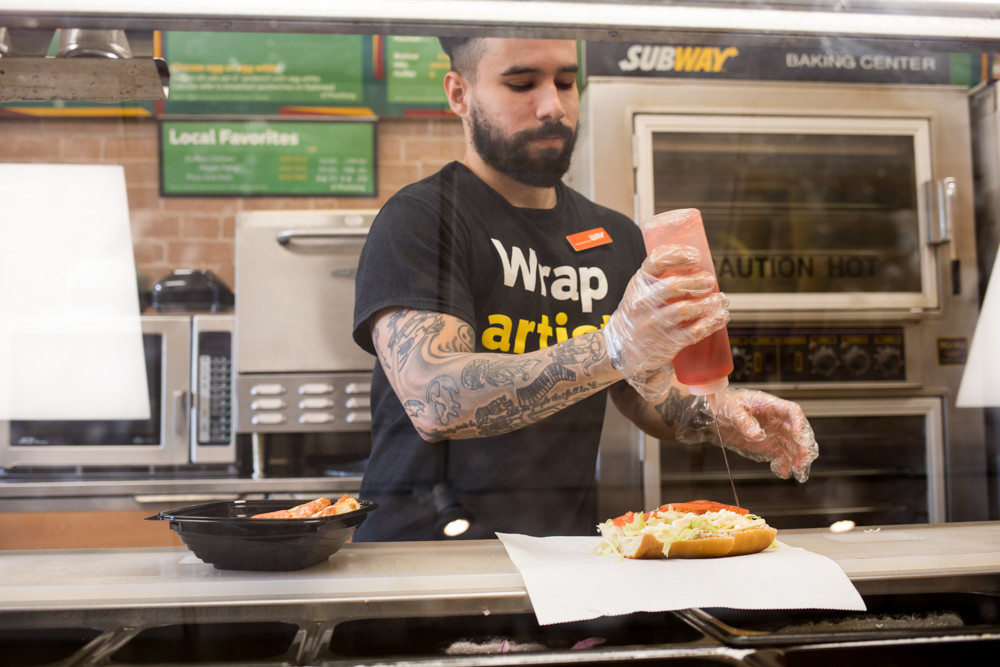 Sandwich artist Sammy Gonzalez drizzles vinegar on a customer’s lunch at the North Riverdale Subway, which some customers — and employees — speculate could close soon. Gonzalez, who works at the location at least five days a week, has carved out a niche as the go-to sandwich guy for a loyal crowd of regulars — residents, commuters and local office workers.
JULIUS CONSTANTINE MOTAL 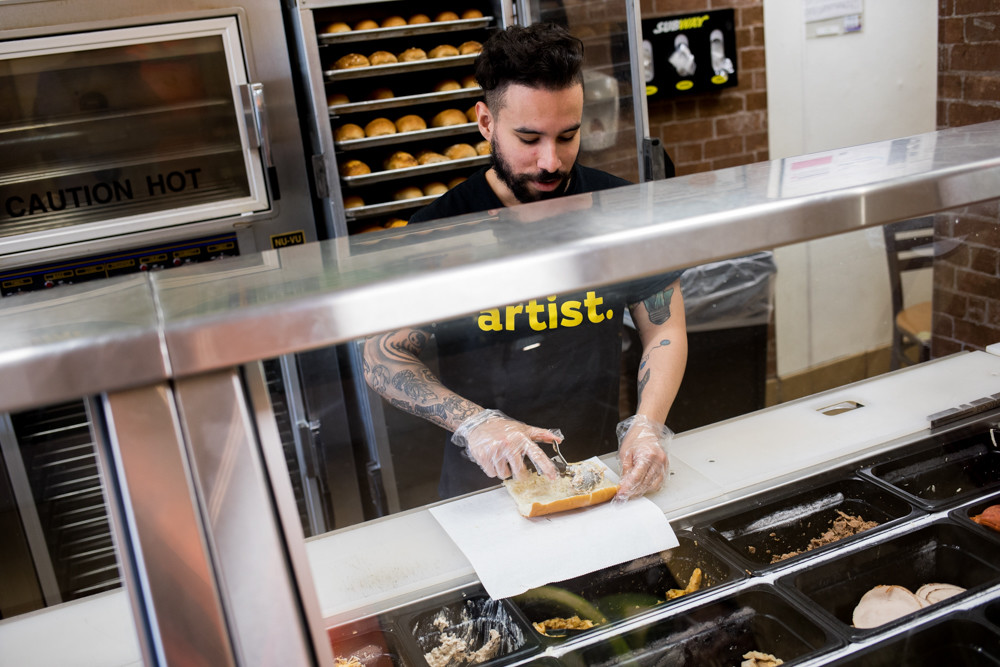 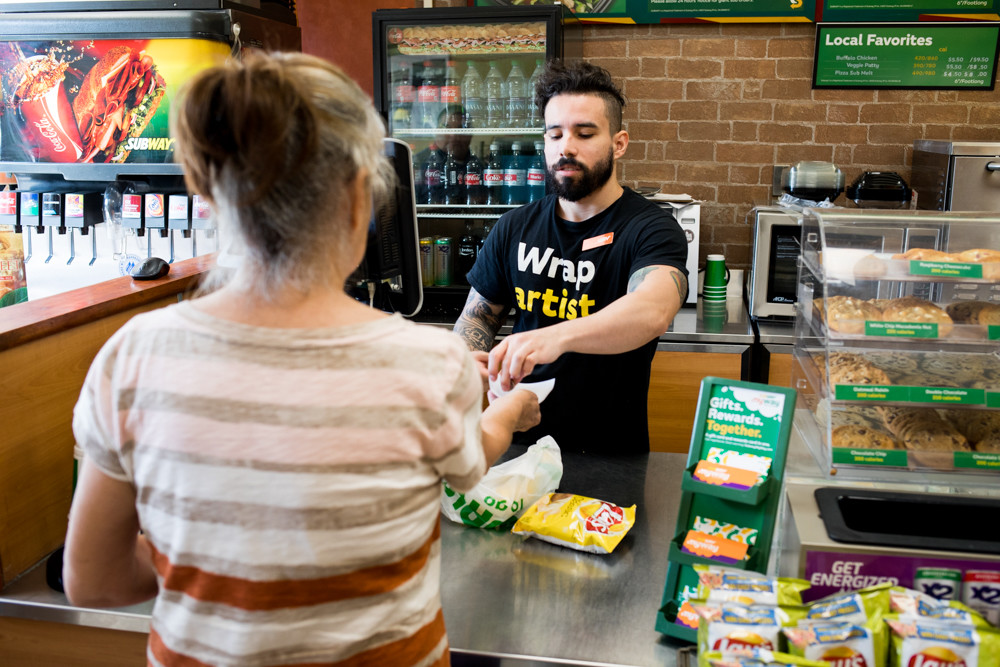 Four years behind the counter at North Riverdale’s Subway restaurant have molded Sammy Gonzalez into a master sandwich maker. While he’s confident he could land another bread-and-cold-cut gig should the franchise shutter, he sympathizes with customers who’ve come to crave his between-the-bun creations.
JULIUS CONSTANTINE MOTAL 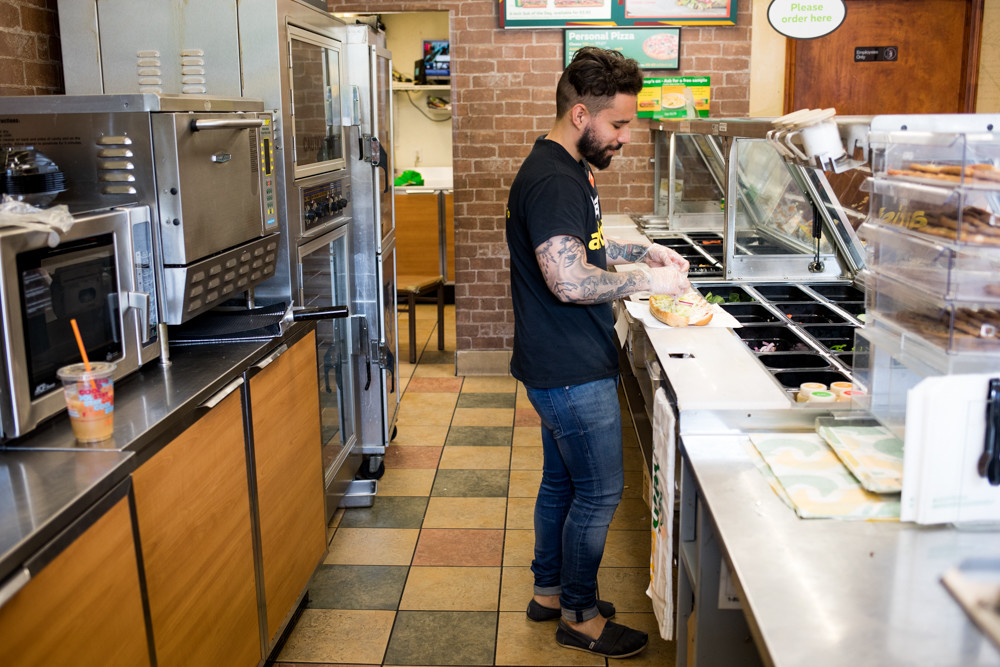 Sub slinger Sammy Gonzalez prepares a sandwich for a customer at the North Riverdale Subway. Gonzalez and his sandwiches have become a fixture in the area, but the franchise may soon close, dealing another blow to the community’s relatively sparse dining scene after glatt kosher chophouse K Grill shuttered in July.
JULIUS CONSTANTINE MOTAL
Previous Next
By ZAK KOSTRO

Sandwich guru Sammy Gonzalez has been left in the dark as to when exactly the Subway restaurant in North Riverdale could shutter. But until it does, he’ll keep making sandwiches.

Yet, Subway isn’t the only neighborhood grub spot on the brink of closing shop. Skyview Shopping Center’s Key Food grocery may not renew its lease. K Grill House — that stolid den of glatt kosher beef, tender steaks and chops — closed with little fanfare in July. And just like that, the options of finding something to eat on this part of Riverdale Avenue not far from the city line could reduce significantly.

Still, the sandwich artist finds it hard to imagine Subway as anything other than the between-the-bread mainstay regulars rely on for foot-long lunches at bargain prices.

“I thought of everything else that there’s a possibility for,” Gonzalez said. “What could this store be? A bodega? They got a bodega near here, so it won’t make money.”

Krunal Kansara, who says he manages this Subway location, as well as nearby Dunkin’ Donuts, offered a decidedly cryptic assessment of the shop’s prospects.

“Plans are depending upon the business and business policy and how it works out,” Kansara said. “The boss, our owner, we will follow that way.”

Yet, Kansara claims he’s just as mystified as some of his employees.

“I am not big boss,” Kansara said. “I am just some manager. Until I get the information, I can’t give it to you.”

Meanwhile, things appear to be just as uncertain for Skyview’s Key Food as rumors circulate about lease renewal negotiations with landlord Braun Management.

“I’m still not sure what the outcome will be,” franchise owner Kevin Luna said.

Yet, Luna acknowledged chatter over possible closure, which could work out in his favor with shoppers up in arms over losing their main grocery spot in an otherwise sparsely provisioned part of town.

“There’s been a lot of rumors going around saying the store might be closing,” Luna said. “I don’t want to feed into it. Just let people rumor around.

“I’ve expressed an interest in extending the lease, but the landlord might have other intentions, other projects in mind with his property, which he hasn’t been able to confirm either. It’s unpredictable right now.”

Some customers have complained about the condition of the store — inside and out — at the shopping center. But Luna hasn’t been motivated to do much about it.

“If I had a longer-term agreement, I could’ve improved a lot in renovations,” he said, envisioning “a whole new store layout with new equipment, everything from top down,” including checkout counters, refrigeration, ceiling and floor repairs.

But until he has his landlord’s word, “Why would I invest a penny in something short-term?” Luna asked.

Anchor stores, like Stop & Shop and ShopRite, are “very critical to the success of the mall because that’s what brings people,” Fishman said. “Most of the people coming there are coming to go food shopping.”

Department stores like Macy’s and Nordstrom also can serve as anchors.

“They draw the traffic,” Fishman said, “and a lot of people live off of that. Other tenants come there because they know they’re going to get (customers) from the fall-off traffic.”

An anchor store tenant will “definitely get a better deal,” Fishman added, not just for drawing traffic, but for renting more space.

Which could give Luna leverage in lease talks.

“As a landlord, you need to get your main anchor tenant,” Fishman said. “Everything else goes around it. That’s really what keeps the mall going.”

As to what killed K Grill — and what’s behind Key Food’s and Subway’s struggles — rent probably isn’t the only factor, said Lyn Singleton, owner of Manhattan-based Singleton Realty Group. Lack of reliable public transportation and foot traffic also could be culprits.

“This might help generate more pedestrian interest and access from those already living or working right in the neighborhood,” he said.

Better advertising and promotion of restaurants and stores starting above West 238th Street and Riverdale Avenue also could help.

“Most people in this area would likely explore more if they only knew what else was really available for only a few more minutes’ drive,” Singleton said.

Even with Gonzalez slapping together hundreds of sandwiches a week, business isn’t exactly booming at Subway, especially over the summer. Granted, things could change as leaves take on fiery hues, air turns brisk and school sessions start in coming months. But with the majority of local students gravitating toward kosher options — like the market across the street from SAR High School, The Pizza Block or Dunkin’ — Subway’s survival could be in jeopardy.

“I still have faith,” Gonzalez said. “I’m here to the end. I have a strong feeling they’re just going to stay the way it is. There’s a lot of potential in this store, and I think someone purchasing it is going to see that, too.”